Kings Midseason Recap: Positional Overview + 3 Up, 3 Down and a Second-Half Outlook 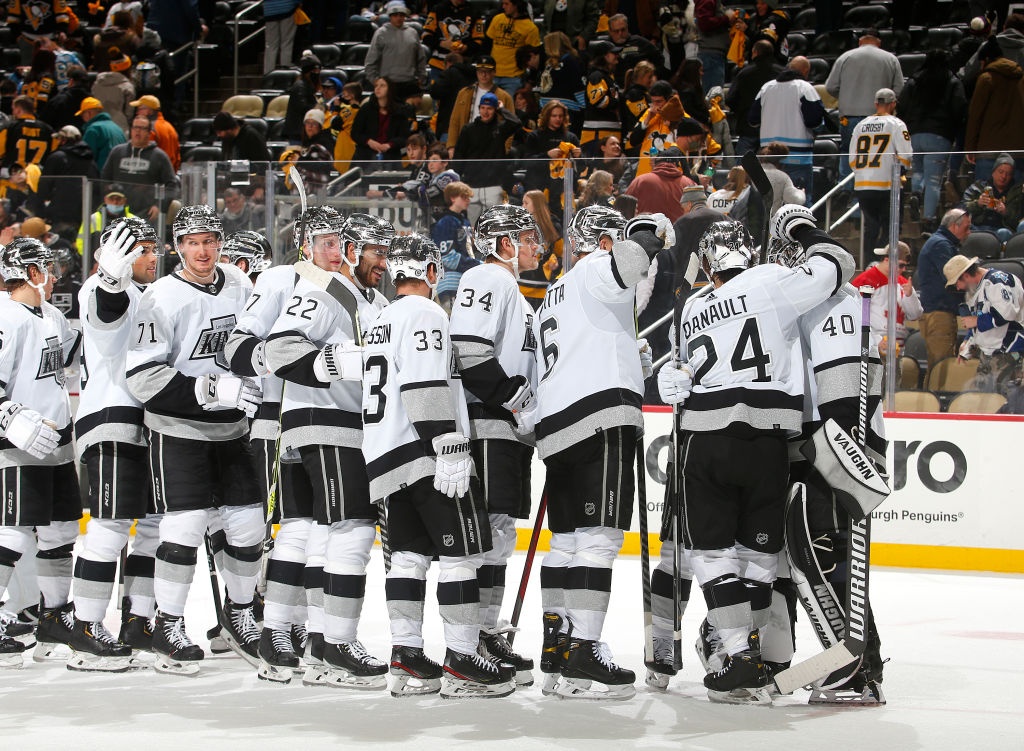 The NHL’s All-Star break certainly did not align with the halfway point of the season, but it presents a chance for a midpoint of reflection nonetheless. The Kings haven’t played a game since February 2 and won’t play again until February 15. A long stretch, though not quite as long as the three weeks that were originally scheduled for participation in the Winter Olympics.

If you expected the Kings to be a playoff contender this season, your predictions have thus far been vindicated. If you were less certain, your expectations have likely been surpassed. For me, I had the Kings right around that third seed in the Pacific Division into wild card bubble hunt, which is right where they stand here. In September, the Pacific Division was regarded by most pundits as the NHL’s weakest. To that point though, you could also infer that as the most competitive.

Teams 1-7 are separated by 11 points. No other division has less than a 27-point gap between the division leader and the seventh-placed team. The Atlantic Division has a 34-point gap in that spot and it’s mid-February! The Pacific has been competitive since Day 1, with the largest group of teams with legitimate playoff cases entering the post-break schedule.

Right in that hunt are of course the LA Kings, a marketed improvement from where they’ve been over the last three seasons. The Kings began the day four points back of the division-leading Vegas Golden Knights, sitting second by points and third by points percentage. The Kings lead Calgary by the former and trail it by the latter, leading both Anaheim and Edmonton in both categories narrowly, and San Jose and Vancouver by larger margins.

Let’s take a look at the Kings to date by position, as well as some of the biggest successes, areas needing improvement in the second half and a second-half outlook for the schedule to come.

Looking at the other returners, Adrian Kempe’s production has been well noted, with the forward one goal shy of 20 and already three ahead of his career-best coming into the season. Kempe’s production resulted in his first career All-Star nod and a spot on the top line. Alex Iafallo is scoring at the highest rate of his NHL career, slightly ahead of his 2019-20 pace. Kempe is on pace to score 35 goals, while Iafallo is on pace to score 25. Even if each player fell five short of those totals, that’s a great campaign for both.

Secondsistent
That’s a lame headline, but man, what a line.

The trio of Phillip Danault at center with Trevor Moore and Viktor Arvidsson on the wings has been extremely effective since they were put together just before the New Year. The trio has produced by whatever metric you want to use, whether it be their puck possession metrics over 60 percent in just about every category, or their increased offensive output by the raw numbers. Moneypuck has that tri0 third in terms of percentage of expected goals, trailing only lines centered by Patrice Bergeron and Auston Matthews.

Bottom Six Contributions
The fourth line has been the most steady line this season in terms of personnel, with Blake Lizotte centering Brendan Lemieux and Arthur Kaliyev. While their production has cooled off a bit over the last few games, they’ve continued to bring an energetic, effective presence to the Kings lineup. Too often last season the Kings struggled to find a productive shift from their fourth line, which narrowed their depth. This season, the line led by Lizotte has done just that. 21 goals from that trio combined has been outstanding production from a fourth line, and we’ll hope to see that continue.

The rest of the forwards have seen a ton of shuffling throughout the opening part of the season. We’ve seen the trio of Andreas Athanasiou, Quinton Byfield and Dustin Brown as the third line as of late, with some promise shown amongst that group, but it’s been a mash of players there through injuries, illness, suspension and protocol.

Defense
No Dought-ing The Production
At 0.86 points-per-game, Drew Doughty’s offensive production on a per-game basis is at – by far – the highest level of his NHL career. Now, Doughty has missed 19 games due to the combination of an early-season knee injury and a positive COVID test, but through 28 games, he’s produced at a high rate, especially at even strength, where his puck possession metrics have been outstanding.

Steady Eddie(s)
When Doughty was out for that extended stretch, the remaining group of defensemen had to develop an identity of their own without their leader. That identity wasn’t flashy, it wasn’t productive by goals and assists and it wasn’t one that will garner them too many spots on highlight reels. But it was effective.

Players like Mikey Anderson and Matt Roy became even more valuable, with their reliable and steady contributions valued even that much more. Roy partnered with veteran Alex Edler on one of the NHL’s most reliable defensive pairings. Others such as Olli Maatta and Tobias Bjornfot found their roles on the left side, logging extra minutes and extra importance. The Kings found a way to overcome injuries by getting back to defensive basics, something that has helped the aforementioned players now that Doughty is back.

Overcoming & Emerging
The Kings have missed three of their veterans on the backend for extended stretches this season, beginning with Sean Walker, who was lost for the season on the season-opening roadtrip. We’ve mentioned Doughty’s time missed, and the team is also now without Alex Edler, who has not been ruled out for the season, but is unlikely to return any time in the immediate future.

That’s afforded opportunities to others, beginning with Sean Durzi. Durzi began the season as the eleventh defenseman on the depth chart for the Kings. He’s now earned a regular role, with power-play time, as he’s come up and played his game effectively at the NHL level. Others such as Anderson and Bjornfot have continued to establish their roles with the Kings, while other young defensemen have filled in when called upon.

Goaltenders
A Quick Start
Jonathan Quick did a good job of making us all feel like we were watching games a few years earlier with his play in the first half of the season. Quick put in a tremendous start to the 2021-22 campaign, with his play keeping the Kings in games just about every night he was between the pipes. Even on nights when the Kings lost, Quick’s play was typically a bright spot, allowing three or fewer goals in each of his first 10 games of the season.

Cal’s Comeback
While out of the gates slower than Quick, Cal Petersen has lost just one start since he returned from COVID Protocol back on January 8. Coming out of protocol, Petersen was determined to reset his season, something we spoke about at length following his shutout against Detroit in his return to action last month. Ever since, Petersen has looked every bit the goaltender he did for the majority of last season, the goaltender the Kings inked to a three-year contract extension during the offseason.

Two Headed Monster
Petersen’s play has returned the Kings to the two-headed monster they hoped to have available to them on any given night. Having both Petersen and Quick at the top of their game has been a big plus for the Kings. On the team’s seven-game winning streak earlier this season and the six-game unbeaten in regulation run that took them into the All-Star break, the Kings saw Quick and Petersen trading quality starts, non so coincidentally coinciding with great runs of form in terms of wins and losses.

Here’s to hoping that continues in the second half.

First Half Areas Of Success
Establish Identity – Not necessarily something you can measure through statistics, but I think it’s quite obvious that we’re watching a different team here this season. The Kings have established an identity as a hard-working, aggressive, difficult to play against team and the proof is in the pudding with their results.

Road Warriors – At 1.23 points-per-road game, the Kings rank tied for 10th in the NHL at this stage in the season. Over the last three seasons, the Kings have placed tied for 20th, tied for 28th and tied for 26th in road points, earning less than a point per contest in all three.

Team Goaltending – At .928, the Kings rank fifth in the NHL in 5-on-5 save percentage this season, a testament to the strong play of Quick and Petersen, as well as the defensive effort the team has put forth in front of them. It’s a 3-2 league in Los Angeles, and the Kings have done a good job of keeping the puck out of their net, starting from the net out.

Second Half Areas For Growth
Special Teams – It’s no secret that improvements on special teams are key to a turnaround in the second half of the season. Ranking 26th in the league on the PP and 29th on the PK, it’s an important focus as the team gets back at it tomorrow. Imagine where this thing could go with even league-average special teams……

Down The Division – The Kings are 4-4-1 to date against the Pacific Division, but will play the majority of their inner-division schedule later on in the season. The Kings begin with three of five out of the gates within the division and will play 17 divisional contests in total in the final 35 games. Important ones to get results in, to build upon this season’s dominance of the Eastern Conference.

Youthful Production – The Kings have gotten nearly a full season at the NHL level from Arthur Kaliyev. They’ve gotten meaningful production from Sean Durzi as well, not to mention players like Mikey Anderson and Tobias Bjornfot continuing their development. Having more players from that highly-ranked group of prospects continue to rise will be key to pushing players for roles and opportunities, and eventually seeing younger players establish themselves as full-time NHL’ers.

Second Half Outlook
The Kings have set themselves up for a run at the postseason when they hit the ice again to begin their final 35 games on Tuesday. That game against Edmonton begins a closing stretch that sees the team play 35 games in 73 days, just shy of a game every other night. Per Tankathon, the Kings have the NHL’s sixth-easiest strength of schedule down the stretch, while by winning percentage, the Kings have faced the NHL’s fourth-toughest schedule to date, and the toughest in the division.

Many of those 35 games will be de-facto “four-point games” though, with the Kings set to play just shy of half of their remaining contests against Pacific Division opposition. Buckle up, Insiders! Practice starts back up tomorrow, and we’ll have full coverage here on LAKI.