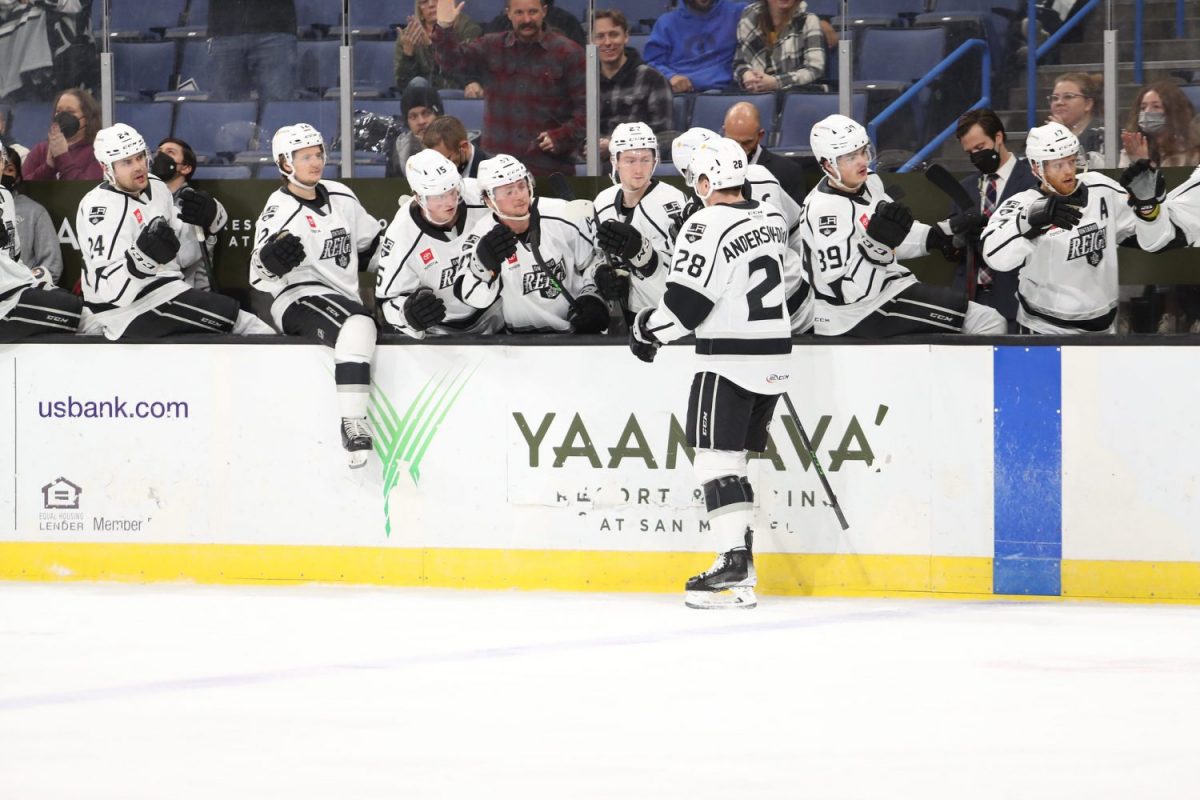 Hey Insiders! With the Ontario Reign currently enjoying a few days off during the AHL’s scheduled All-Star break, (the league’s actual All-Star game was postponed for a second straight season) it’s a good time to look back at how the team has fared so far this season.

Ontario is just beyond the midway point of its 68-game season, having completed 37 of the scheduled contests. A 24-8-3-2 overall record has them in second place in the Pacific Division standings with 53 points and a points percentage of 0.716.

The Reign opened the year with a 10-game unbeaten streak that had them at the top of the mountain during the first month of the campaign. But the Stockton Heat were on their tail throughout and after the Reign lost their first game in regulation to Tucson on Nov. 12, Ontario dropped to second. They’ve been No. 2 in the standings almost every day since with one exception when they briefly passed the Heat two weeks ago on Jan. 27, only to lose a head-to-head matchup with Stockton two days later.

Other than when they got out to a hot start, the current run the Reign are on has been their second-best stretch of the season. Beginning when the calendar flipped to 2022, Ontario has gone 10-2-1-1 in its last 14 games before this week’s break.

The team has been led by its offense most of the way, posting an AHL-best 4.08 goals per game. The consistency at which the Reign have scored all season has been highly impressive. Ontario has netted five or more goals in 16 of their contests, winning all of them, and has also posted four goals seven times, going a combined 20-2-1 in games they score at least four.

It’s also been rare to see the Reign trailing in games this year. Ontario has only been behind after the first period five times and has come back to earn a win in two of those instances. When they’ve gotten out to a lead after the first period, the Reign are 15-0-1. There have even been three occasions when the team came back to win after starting the third period with a deficit on the scoreboard.

In addition to putting together multiple lengthy point streaks, Ontario always seems to respond well after a loss. The group has come back to record a win in six of the seven games they’ve played following a regulation loss and has picked up wins in nine of their 11 games following a loss of any kind. A two-game sweep on the road at the hands of the Abbotsford Canucks has been the only time the Reign have suffered back-to-back regulation losses all season.

Reigning AHL Most Valuable Player TJ Tynan is leading the way individually with 48 points in 31 games, ranking second in the league’s scoring race. Tynan’s 40 assists are the most of any skater in the league and he has six more than the next closest attacker. The veteran also leads the league in points per game (1.55), power play assists (23), power play points (24) and has the longest road point streak in the league this season which spanned nine games from Oct. 29 through Jan. 27. Tynan has recorded multiple points in more than half of his appearances, factoring in on multiple goals 17 times this year. 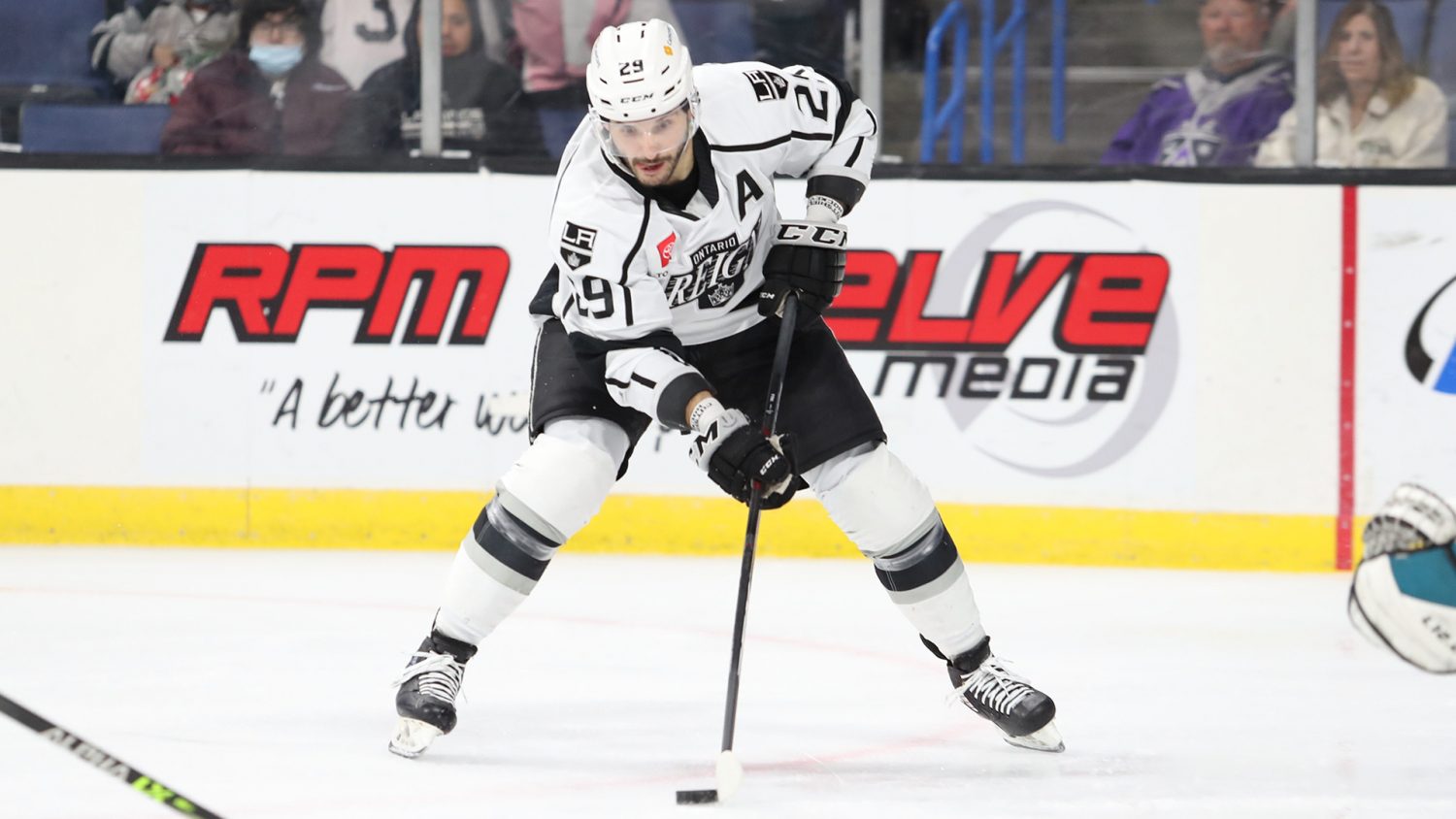 Lining up to the right of Tynan for most of the season has been Martin Frk, who leads the team and is second in the AHL with 20 goals in 32 games for Ontario. Frk also has 20 assists, totaling 40 points which ranks sixth in the league, and 10 power play goals, tied for the most in the AHL.

Holding the tie with Frk for the league’s power play goal lead is Reign forward Jaret Anderson-Dolan, who has scored 10 of his 16 goals this season on the man-advantage. Anderson-Dolan’s goal total is second on the team, and he’s tied for third on the club in overall scoring with defender Jordan Spence, each posting 28 points apiece.

Speaking of Spence, the rookie has broken out over the last month, becoming a big part of the team’s play on both offense and defense. His 26 assists are fifth-most in the AHL and he’s picked up 16 of them since the start of January. He was the first option to fill in for Sean Durzi on the point of the team’s top power play unit and has become a mainstay at that position with great success, earning 16 power play assists and 18 man-advantage points. Both of those numbers rank second-most among all AHL rookie skaters.

Defensively, Spence has been paired with veteran leader Cameron Gaunce and has improved in all areas, most notably in his 5-on-5 play without the puck. If Spence can continue his success and sustain the type of numbers he’s put up in the last month, he could receive consideration for the AHL’s Rookie of the Year award.

Multiple Reign players have posted an impressive plus-minus rating this season, with forwards Samuel Fagemo and Alex Turcotte each leading the team at +16, while Spence is just behind them with a +15 rating.

The team’s ironman has been forward Aidan Dudas, the lone player who has suited up for all 37 Reign contests this season. Dudas has totaled 18 points on eight goals and 10 assists and has played up and down the lineup, but most recently has found success on a line with the club’s captain Brett Sutter as well as Austin Wagner.

Sutter, who recently played in his 1,000th career professional game, has appeared in all but two of Ontario’s contests while posting 14 points on an even seven goals and seven assists along with a +11 rating. Wagner has been one of the Reign’s hottest forwards as of late, riding a three-game point streak into the break with goals in four of his last six to reach double figures for the season.

Goaltending has also been an important piece of Ontario’s success. While Matt Villalta has been the team’s clear go-to starter, the Reign have also turned to Garret Sparks, Jacob Ingham and Lukas Parik in between the pipes. 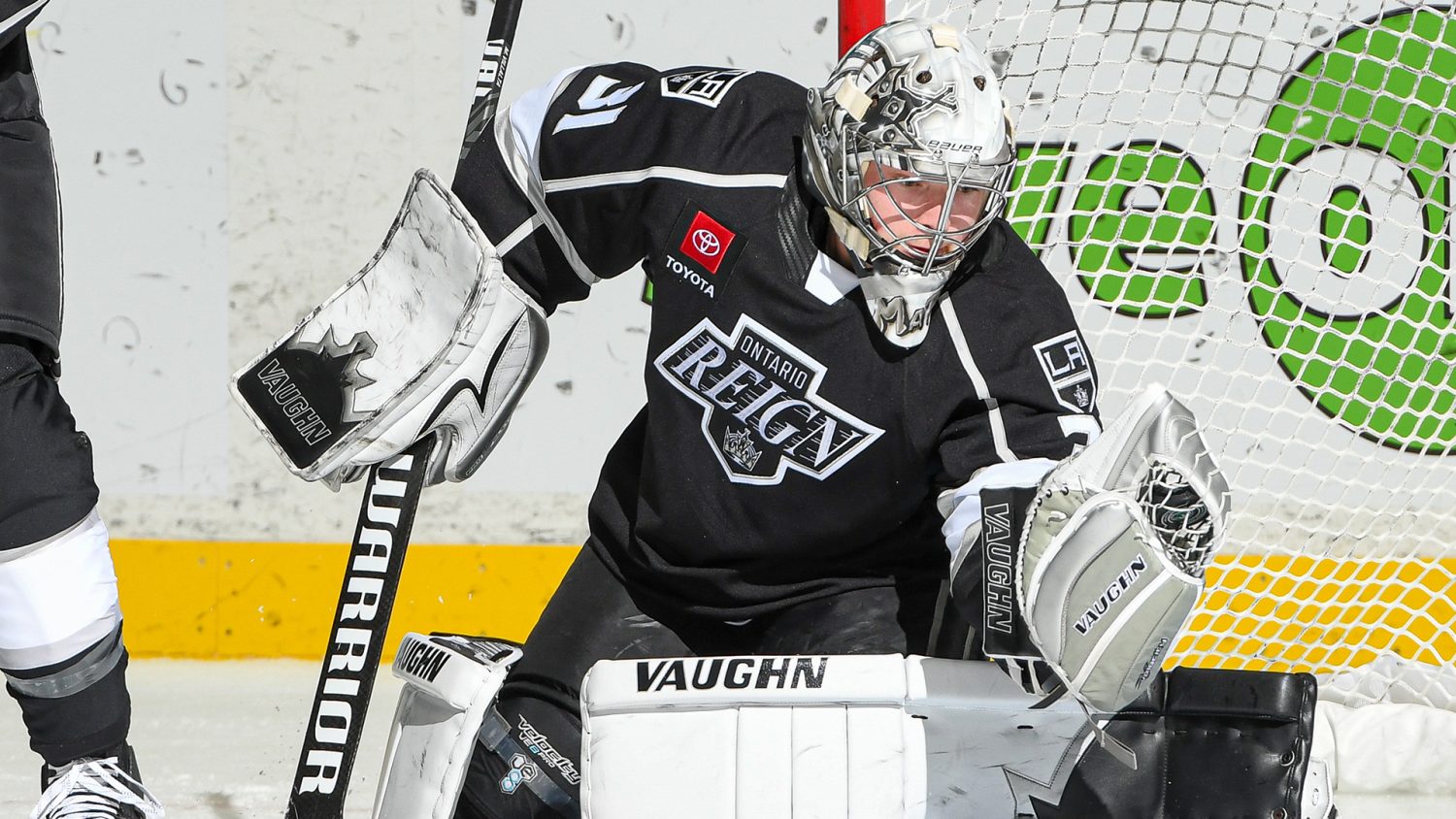 Villalta has taken the reigns as the team’s most-often backstop, starting 20 games and earning a record of 14-3-3 with a goals-against average of 2.55 and a 0.915 save percentage. The third-year pro’s win total ranks fifth in the AHL. But not reflected in his season statistics is the number of times Villalta has come up with a big save in a key situation or the comfort level his team has in front of him. There’s no doubt that the netminder has earned his status as the starter with the coaching staff and in the locker room.

When Villalta hasn’t been in goal, Sparks has posted a 5-4-0 mark in 11 appearances but most recently has been sidelined with an injury since Jan. 8. Rookies Jacob Ingham and Lukas Parik have each seen action in four games, combining for five wins.

Special teams have been a mixed bag so far for the Reign. On one hand, the team’s power play has been a staple of their success, a dominating force with 42 goals and a league-leading percentage of 27.6%. Ontario has scored at least one time on the power play in 27 of their 37 games, and also lead the AHL with a 30.1% power play rate at home with 22 goals in 20 contests. The man-advantage proficiency has certainly won them their fair share of games this season.

But on the other side of the coin is Ontario’s penalty kill, which is third from the bottom of the league rankings at 75%. The Reign have fared better away from home with a 77.9% kill rate on the road, but despite consistent effort, the unit is one area the team will need to improve on during the second half of the season.

All the while during this success for Ontario, the LA Kings have had to recall many of their top options to the NHL. That’s the goal for each of these players, to reach the highest level of hockey. Every one of them that has stepped into the lineup for the Kings has been able to contribute and make an impact. In total, 15 players that have seen action with the Reign this season have also suited up for NHL games with the Kings.

While nothing’s ever perfect and there’s always room for improvement on any roster, the Ontario Reign have done some very good things over the first half of their season and are in a position to continue as one of the best teams in the AHL as the stretch run toward the playoffs begins. 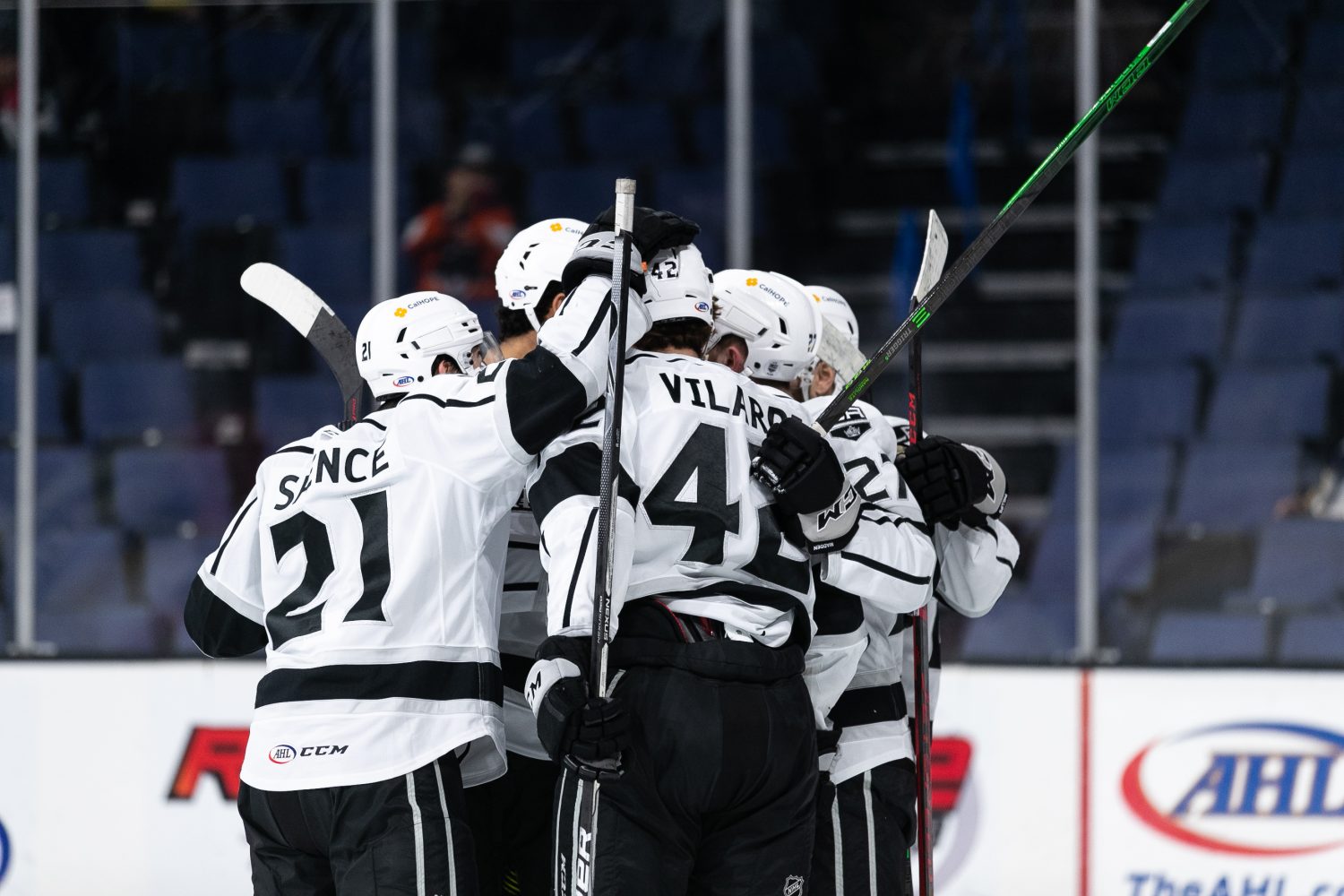 Ontario Reign captain TJ Tynan has had quite the month. When 2023 began, the first line center was leading the