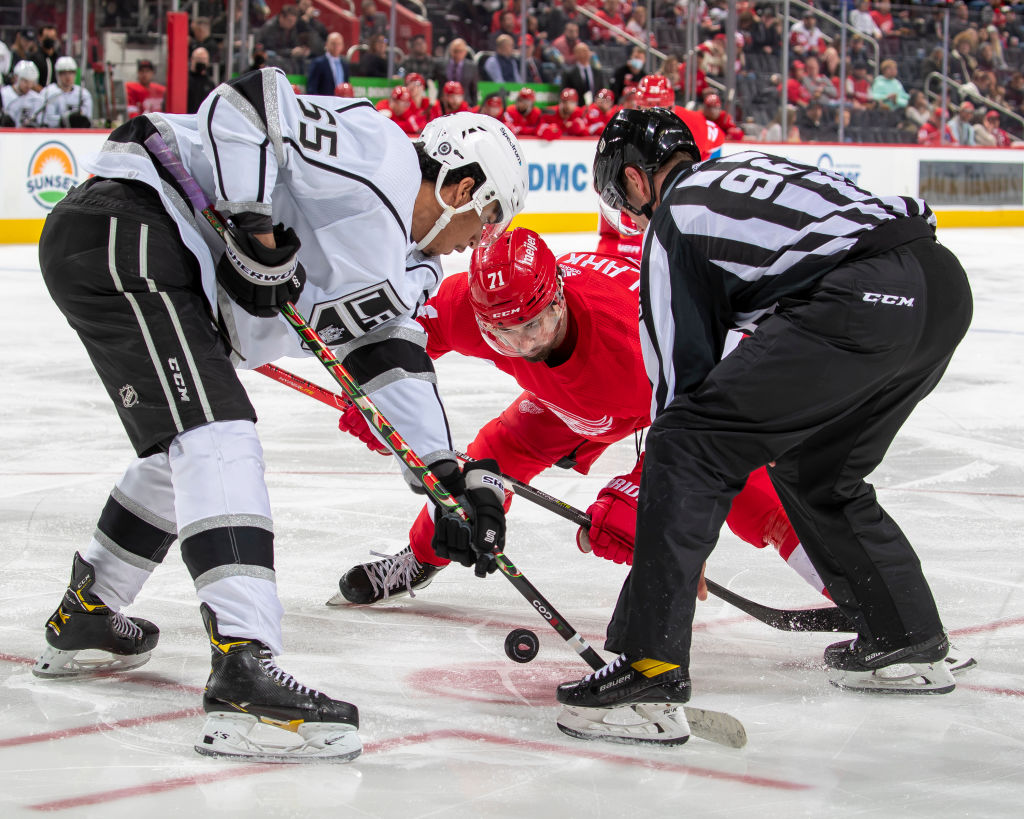 The LA Kings capped off their six-game road trip with a 5-3 victory over the Detroit Red Wings on Wednesday evening at Little Caesars Arena. The Kings conclude their trip with a 4-0-2 record, the best six-game trip in franchise history.

Forward Phillip Danault scored twice in the victory, while forward Arthur Kaliyev scored in the second period, and forwards Viktor Arvidsson and Adrian Kempe each scored empty-net goals. Goaltender Jonathan Quick made 22 saves to earn the victory between the pipes.

The Red Wings opened the scoring with the lone goal of the first period, as center Michael Rasmussen got on the board less than three minutes from the first intermission. After Filip Zadina’s shot was blocked in tight, Rasmussen was first to the rebound and he put it home for his fifth goal of the season.

The Kings pushed back with a pair of goals from right around the blue paint, taking a 2-1 lead through 40 minutes. First, Danault drove the net and swatted home a rebound opportunity from in close, his 11th goal of the season. With less than two minutes remaining in the middle stanza, Kaliyev put the visitors ahead, as he put home a deflected Austin Strand point effort for his eighth goal of the season.

Detroit evened the score midway through the third period, as Tyler Bertuzzi collected his 22nd goal of the 2021-22 season. As defenseman Gustav Lindstrom walked in down the high slot, Bertuzzi stationed himself in front of the net and got a deflection on the shot, sending it past Quick for the goal.

The Kings pushed back, however, with the second line again the difference. Arvidsson sprung his linemates on a 2-on-1 rush, with Trevor Moore feeding Danault for a tap-in at the back post for his second goal of the evening. Moore’s assist was his second of the contest, another multi-point effort for the energetic winger.

The Kings picked the empty net, through Arvidsson from center ice, but Detroit got the goal back quickly through forward Joe Veleno, who deked to his forehand and lifted the puck over Quick’s pad for the goal, his fourth of the season. The Kings followed up with a second empty-net tally, however, to seal the deal, with Adrian Kempe getting his 19th of the season.

Notes –
– The Kings complete their East Coast road trip with a record of 4-0-2, marking the first time in franchise history that they have collected 10 points from a six-game trip.
– Forward Phillip Danault tallied his third multi-goal game of the season, including the game-winning goal in the third period.
– With two assists tonight, forward Trevor Moore has now collected multiple points in back-to-back games.
– Defenseman Austin Strand collected assists on the first two Kings goals tonight, giving him the first multi-point game of his NHL career.
– Forward Viktor Arvidsson tallied a goal and an assist this evening, his second consecutive multi-point game and his third from his last four games.
– Over the course of the two head-to-head matchups, the Kings outshot Detroit by an 87-46 margin.

The Kings have now reached the NHL’s All-Star break, set to begin tomorrow. The team is scheduled to return to game action on February 15, with an updated practice schedule to be released at a later date.