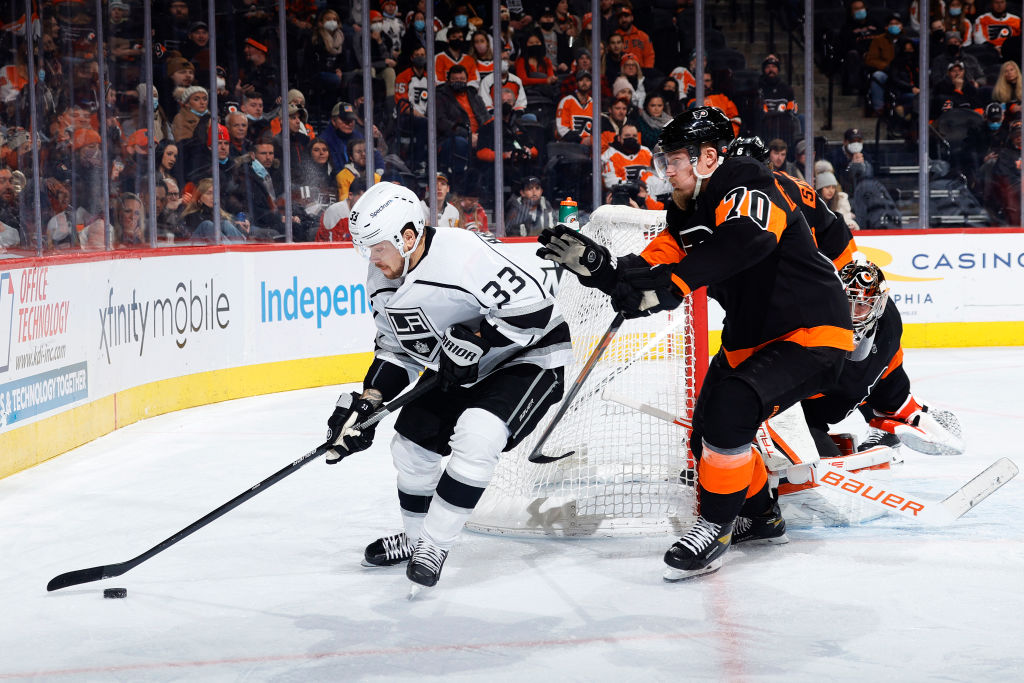 The LA Kings fought back to earn a point on the road in Philadelphia, but fell in overtime during a 4-3 loss against the Flyers.

Forward Viktor Arvidsson scored twice in regulation, while forward Anze Kopitar put home the tying goal late in the third period to force the extra session. Jonathan Quick made 32 saves in net as he took the overtime loss.

The Flyers opened the scoring midway through the first period in transition, with the lone goal of the opening 20 minutes. Defenseman Rasmus Ristolainen attacked the slot in transition, before he made the extra pass to an open Gerry Mayhew for a tap-in at the back post, his third goal of the season.

Philadelphia scored at a nearly identical point in the second period to double their advantage. Forward Claude Giroux forced a rebound on a shot from outside, which fell to Cam Atkinson in the slot, which he buried for his 16th goal of the season.

The Kings pulled a goal back late in the middle stanza, through Arvidsson, to halve their deficit heading into the second intermission. Off of a highlight-reel passing play, Phillip Danault sent a spinning, backhanded pass to Sean Durzi, who made a great move and pass to Arvidsson for the goal at the back post, his 11th of the season.

The teams traded goals on the same power play sequence, midway through the third period, to push the score to 3-2. After Cam Atkinson scored an unassisted goal, while shorthanded, nine seconds in, the Kings responded through Arvidsson with a power-play goal 45 seconds later to pull it right back. Arvidsson’s tally, a redirection off of an Arthur Kaliyev shot, was his eighth of the season, with Durzi tallying his second point of the afternoon.

With the goaltender pulled late in the game, the Kings were able to find an equalizer inside the final minute, through Kopitar. After a mad scramble in front of the net, all stemming from a Drew Doughty point shot, the puck fell to Kopitar in the right-hand circle, where he swept it home on the backhand for the game-tying goal, earning the Kings a point in the process.

Philadelphia started overtime on the front foot and capitalized via Scott Laughton to snap their losing streak. Laughton picked up a rebound in close and put it home from just outside the crease to give the Flyers the victory.

*Note – Defenseman Mikey Anderson left the game with an upper-body injury and did not return. Per McLellan after the game, the injury stemmed from a puck he took up high in the first period. No further update on his condition at this time.

On the team’s ability to get a point on the road today
I think we need to be a little bit more consistent in our game, but like you said, great character, that showed in the third. Even when they scored to go up 3-1, we came back from that. It was good.

On not being as sharp early in the game as the two games in New York
I agree. I think they were a little bit faster and more detailed than us in the first. I think we got going in the second and then I think the third was a tight period, but we had a lot of chances.

On the passes from Durzi and Danault on his first goal
Those were great plays by both of them. I just put my stick down and basically guided it into the net. Great plays.

On the key to a faster start tomorrow against Pittsburgh, and if it’s easier playing back-to-back with afternoon games
Just get rest and be ready to go, sharpen our minds a little bit. I think it goes both ways, it’s the same amount of time between games. We’ve just got to adjust, I guess, but I don’t feel like it’s a big difference.

On the team’s resilience to get a point on the road
That’s a good sign. To come back, down two, midway in the third period, that’s a really good sign. I don’t question the drive to want to come back in this team, we have good leadership, we have a lot of guys that are playing hard right now. We just weren’t sharp enough for the other 50 minutes. We weren’t sharp defensively and we didn’t check well and we’re probably lucky to get the point.

On what was lacking for the Kings early on
We didn’t have a lot of pop, we didn’t get our forecheck going at all. When we did, we had a chance to hem them in for a little bit but it wasn’t consistent enough. We didn’t check well enough, we missed assignments, we were loose, the first goal was a prime example. Usually, when you’re not checking well enough or tight enough, and don’t have enough polish at the other end, you’re not winning.

On Sean Durzi’s play tonight
He’s very agile, very mobile with the puck, slippery, it looks like he’s moving forward and he’s actually moving laterally. I thought Durz had a hell of a game. There was maybe one shift where he was beat wide, the rest was all positive. He commands the puck on the power play, good eyes up there. I thought today he was probably our best defenseman.

On if he sees a sign of growth with getting a point with the “B” game, whereas earlier in the year that didn’t happen
There’s two sides to that coin. Earlier in the year, we maybe would have started better and then not checked well. We didn’t have the start we needed tonight, but the fact that we were able to get a point with our “B” game is a good thing, but we can’t rely on that too often.

On getting a goal from the second power-play unit
Really good [to see them get a goal]. They simplified things, they’re pretty direct right now, scoring ugly if you will. Good to see them get on the board.

– Forward Viktor Arvidsson collected his second multi-goal game as a member of the Kings with two goals in regulation. Both times, the opposing team was the Flyers.
– The forward line of Arvidsson, Phillip Danault and Trevor Moore finished the season series against Philadelphia with a combined 15 points from two games played.
– Defenseman Sean Durzi posted the third multi-point game of his NHL career with a pair of assists this afternoon. Durzi now has 11 assists this season, fourth-most amongst rookie defensemen.
– Durzi logged 23:27 today, his second-highest total of his NHL career, while defenseman Drew Doughty surpassed 30 minutes played for the first time this season (30:24).
– The Kings scored with the goaltender pulled to tie the game for the first time since the 2019-20 season.
– The Kings have four power-play goals from their last six games played.

The Kings are set to travel to Pittsburgh later on this afternoon. The team will not hold a morning skate tomorrow, in advance of another 1 PM puck drop, this against the Penguins.