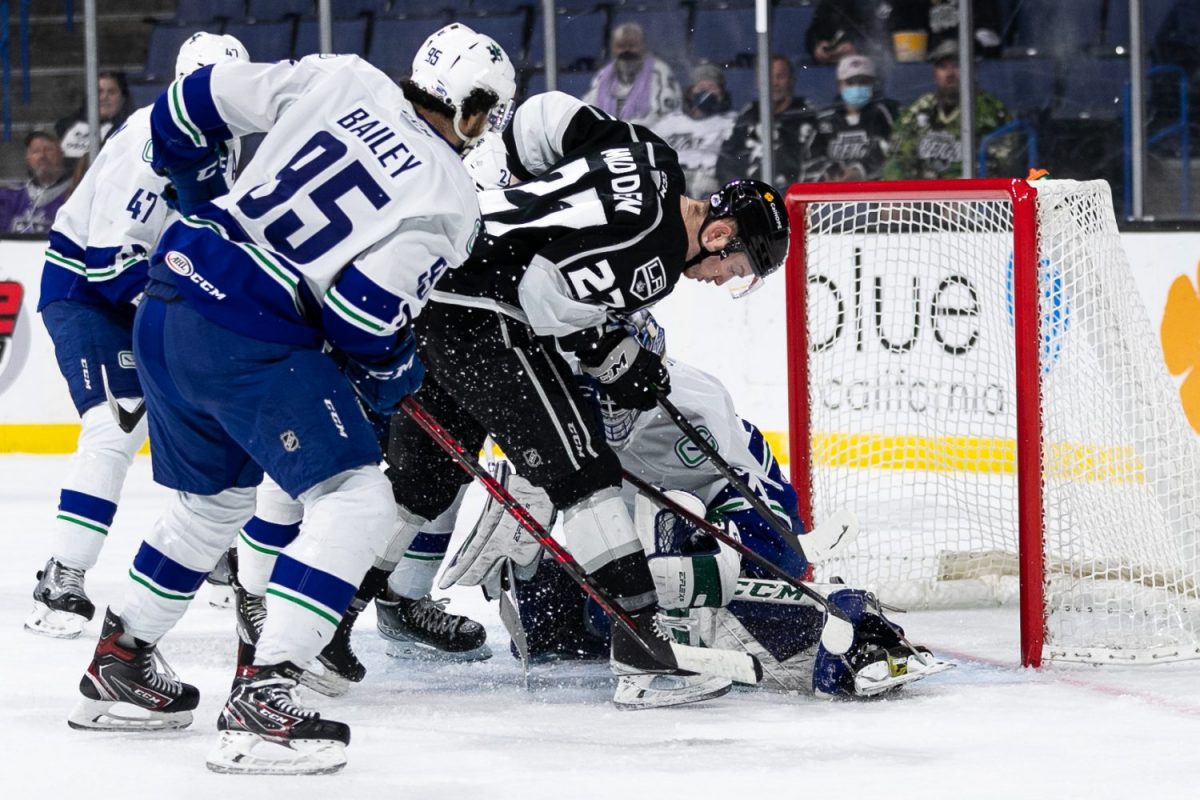 The lone strike for the Reign was credited to defender Jordan Spence, who has points in a career-high six straight games, while goaltender Matt Villalta started for the third time in four days for Ontario and finished with 34 saves to secure his team one point in the standings.

More from Reign Assistant Coach Chris Hajt and Villalta below.

Spence’s goal came off the rush at 1:33 of the second period after he fed the puck to the front of the net where his defensive partner Cameron Gaunce was charging hard to the crease. The biscuit deflected past Abbotsford goaltender Arturs Silovs, who made 22 saves before saving all three Ontario opportunities in the shootout to earn his second win of the season over the Reign.

Assists on Spence’s tally, which is also his third in five games, went to Gaunce and forward Tyler Madden. Madden is also on a hot streak, scoring points in five consecutive contests with three goals and three assists during the stretch.

Abbotsford’s goal was scored on a shot from the slot by Sheldon Dries at 7:24 of the third period and evened the game up at 1-1.

Phil Di Giuseppe was the lone skater to find the back of the net in the skill session for the Canucks, while Gabriel Vilardi, Madden and Quinton Byfield were held scoreless by Silovs.

The Canucks outshot Ontario in all three periods prior to overtime for a total advantage of 36-23. Neither team was able to strike on the power play in the contest, both ending at 0-for-5.

Chris Hajt
Initial thoughts after the game
Having a lead going into the third period you always want to close it out and get that next goal and we weren’t able to do it and they got one, they were pressing, especially the first 10 minutes of the third period we were on our heels, and maybe even longer. We had some opportunities that we didn’t cash in and both penalty kills did a good job tonight and ultimately we didn’t get it done.

On the play of Abbotsford in the game, a tough opponent all season
They play a hard game. They are a tough checking team, played well with and without the puck. We definitely had some good battles and they got the better of us at the end but again, a back-and-forth game.

On the staff choosing Matt Villalta to play his third game in four days
He deserved it, the way he played the first two games and his calm presence- he looked really good in the net, looked really comfortable and gave us an opportunity to win all three games, so a great three games for him.

On the team’s one goal by its defensemen
Well I’m just glad it counted. The referees were talking about whether it was going to count or not and they knocked it in and that’s what happens when you put pucks to the net, you never know how it’s going to go in or when it’s going to go in so it’s important to continue to get more shots on net.

Matt Villalta
On how he felt he performed in the game
Would’ve liked to come out with the win to finish the weekend, would’ve been three wins in a row, but we’ll take the five out of six points I guess. From my standpoint, I think I felt pretty good in there. I was just having fun playing and had a little break there for a little bit but it’s nice to be back with the fellas and get back in a rhythm and just focused right now on taking it one day at a time and playing hockey.

On how long it took for him to get back after missing time
Thankfully we had a week of practice when I came back so I got four days in with Matt Millar and the boys and it helped me get back to where I wanted to be with my game and it set me up, we had a good week of work, really worked hard and just believing in myself and wanted to take it one game at a time this weekend and try to help the boys out as much as I could. I think the boys played very good in front of me and I thought for the most part played a good team game. This game we had some ups and downs and just a really good hockey game. They obviously took it there but I thought it was a good weekend.

On if he’s played three games in four days in his career in the past
I can’t say I have, I think that’s a first for me. Definitely pretty cool though. I personally like playing a lot and I feel like as I play more games I get in a routine and rhythm so it was definitely cool that the coaching staff gave me the net for three games and I just try to go in there and do my best.