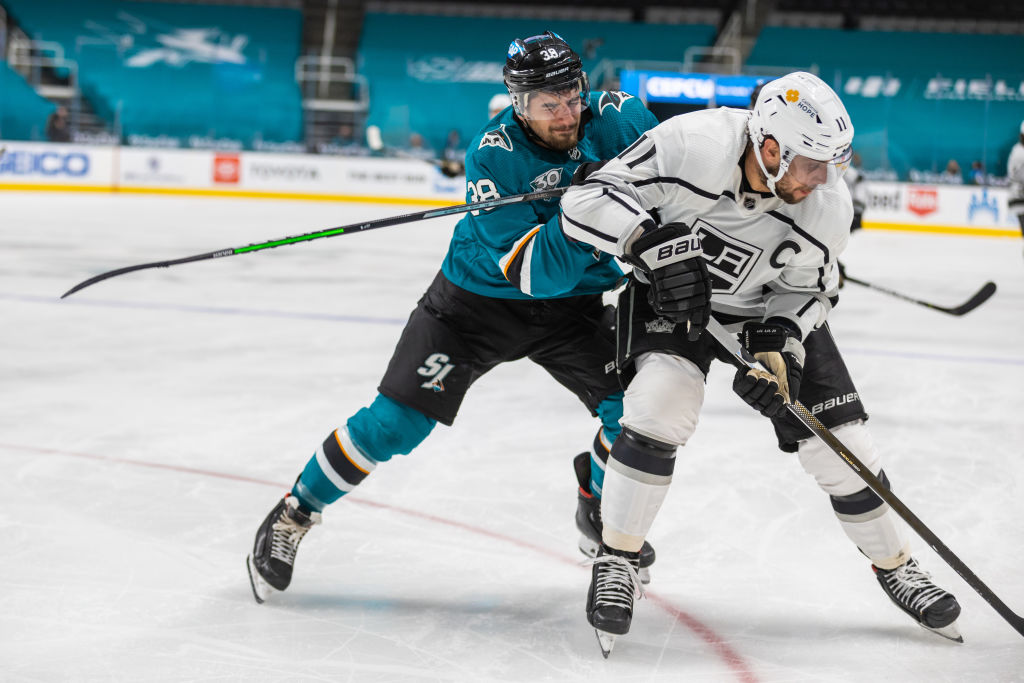 TONIGHT’S MATCHUP: The LA Kings conclude a brief, two-game road trip this afternoon with a divisional matchup against the San Jose Sharks.

HEAD-TO-HEAD: Today’s game is the first meeting of the season between the two California rivals. Last year, the teams met eight times with the divisional-only format, with San Jose winning six of eight, including three of four on home ice. Forward Dustin Brown led all skaters with nine points (4-5-9) from eight games played, while Alex Iafallo (4-3-7) and Drew Doughty (0-7-7) had seven points apiece.

KINGS VITALS: Tonight’s matchup with the Sharks is just the ninth divisional game the Kings have played this season, entering tonight’s action with a 4-3-1 record versus the Pacific Division to date.

No morning skate today, considering the 1 PM start, so we won’t know today’s starting netminder for sure until closer to puck drop, If the Kings continue their goaltender rotation and Jonathan Quick gets the nod, he would be making his 42nd career start against San Jose. Quick is 18-14-7 lifetime versus the Sharks, with a .908 save percentage and a 2.56 goals-against average. If Cal Petersen goes for consecutive starts, he brings with him a 1-3-1 record from five appearances, to go along with a .907 save percentage and a 2.99 goals-against average.

The Kings will be without forward Adrian Kempe this afternoon, after the NHL All-Star was placed into the league’s COVID-19 Protocol yesterday. Kempe will likely miss at least the games today and tomorrow, with Thursday against Colorado potentially a race to clear depending on exact timing and other factors.

A tough break for the Kings, who we reaping the benefits of Kempe’s strong play, both individually and how well he fit on the first line with Anze Kopitar and Alex Iafallo. Forward Samuel Fagemo skated in that spot during yesterday’s practice, though it remains to be seen how the Kings will approach that situation versus the Sharks. More on Kempe’s absence below.

With no morning skate today, here’s how the Kings lined up yesterday afternoon during practice in Seattle –

SHARKS VITALS: San Jose has gone to overtime in three of its last four games, and five of its nine games played since returning from holiday break in late-December.

The Sharks were undecided on tonight’s starting goaltender as of yesterday afternoon. Per Corey Masisak of The Athletic, goaltender James Reimer is an option coming out off of an injury, but no call yet between him and Adin Hill, who has started the last five games for San Jose. If Reimer returns, he is 4-2-1 lifetime against the Kings, with a .941 save percentage and a 1.99 goals-against average. Hill has faced LA more frequently than any other opponent in his career, with six career appearances. He is 3-2-1 with a .915 save percentage and a 2.64 goals-against average.

Per Natural Stat Trick, here’s how the Sharks lined up last time out against Pittsburgh –

Forward Alexander Barbanov has not been ruled out for tomorrow, though he remains in COVID Protocol as of this writing. Other players currently out include forward Kevin Labanc and defenseman Nikolai Knyzhov.

Just How We Drew It Up
Let’s take a look at Drew Doughty’s production this season, shall we?

That’s a lot of copy/pasting the phrase “highest of his career” isn’t it? These figures reference the chances the Kings have created with Doughty on the ice, not his percentage of chances controlled, though we could have just as easily used those figures as well. His percentage of shot attempts and scoring chances are also at the highest rate of his career, while his high-danger chances controlled are a close second.

Last season, we saw the emergence of a Doughty / Mikey Anderson pairing as one that helped to solidify a partner for Doughty, creating a pairing that was able to stand up and defend against the league’s top lines, game in and game out. That was what that duo excelled in last season – shot suppression. Among blueliners with 1,000 or more minutes played last season, Doughty was fourth-best in terms of fewest shots conceded.

While the defensive play hasn’t left this season, it’s the other end of that ice that is garnering Doughty recognition, and it’s been about even more than just analytics. Doughty has 19 points from 19 games played this season, tallying at least one point in 12 of those 19 games, as well as a pair of three-point games.

“I’ve been trying to create more offense this year, that was one of my goals,” Doughty said. “At times, I feel like I’m cheating, which I don’t like about myself because I’ve never played that way, but there are times when I’m taking risks that I never in the past would have taken, but I still feel like I’m playing very responsible defensively.”

With Doughty’s rise has also come an increase in Mikey Anderson’s contributions, even if his are less noticeable through statistics. Doughty said that last season, it was always him choosing to join the rush offensively, with Anderson more comfortable staying back to defend. This season, not only does Doughty have more confidence to jump up himself, knowing a more seasoned Anderson has his back, but Anderson himself is also more comfortable taking on that role as well.

“Mikey’s been doing a good job of getting up in the rush, he did a good job [in Seattle] on one of the goals,” Doughty said. “We’re just looking for one of us to get up in the rush at all times and get involved in the o-zone. I think Mikey, before, was like ‘I’ll just let Drew go and do his stuff, and I’ll sit back,’ but I’m encouraging him to keep getting in the rush and I’ll sit back too sometimes, when I’m not the guy who’s ahead I want him to go.”

Getting continued offensive contributions from that duo, skating alongside one of the Kings top-two forward lines, is a welcomed sight for all.

Filling In For Number 9
We can call a spade a spade here and admit there is no 1-for-1 replacement for Adrian Kempe available to the Kings tonight. This is a first-line forward, who leads the team in goals. If the Kings had another version of that player, I’d have to imagine that he would already be playing.

What they do have, however, are young, hungry players in search of another opportunity. Yesterday’s practice gives off the impression that we could see Samuel Fagemo enter into the lineup tonight, though that was not confirmed yesterday after practice. Fagemo took part in line rushes in Kempe’s place yesterday, but with the timing of that news, it could have been as much about convenience than anything else. Todd McLellan shared that the Kings do have a plan for that spot, he did not specify exactly what that plan was.

“We’re going to start with a plan and it’s going to be flexible,” McLellan said. “Obviously that’s a really important line for us, they play a lot of minutes in a lot of different situations, usually against the other team’s top lines. We’re asking a lot of whoever goes there. We’ll start a certain way and we’ll adjust as needed.”

In Kempe, the Kings will be down a 17-goal scorer, after the Swedish forward set his own NHL career-high on Saturday night against Seattle. In what would be just his second NHL game, Fagemo can’t be expected to carry that entire weight on his own, but he is coming off of an impressive debut on Thursday against Pittsburgh, as he logged nearly 12 minutes filling in for Brendan Lemieux.

The Kings have two options when it comes to replacing Kempe – Move in a player, 1-for-1, and keep the other lines intact, or move another player into Kempe’s spot, and move in a player from the press box into a spot lower in the lineup. Both have their pros and cons.

If yesterday’s 12 forwards hold up, Fagemo brings speed and a good shot to the mix, showing no fear against one of the league’s best teams in Pittsburgh, impressing in the process. As he’s developed his game at the AHL level, we’ve seen Fagemo’s scoring touch grow in recent weeks, but it’s been his overall game that has come along even further. At the NHL level, 11:54 into a career, that’s the part that the Kings want to see in order.

“I thought he played tremendously,” McLellan said of Fagemo’s debut. “He woke up [that] morning, practicing with the Reign, had no time to think about his first night and he had a tremendous game, he played well. Couple of good scoring opportunities, responsible all over. Good night for him.”

Forward Jaret Anderson-Dolan is also an option, with the versatile, 22-year-old forward currently on the taxi squad. I suppose going 11 forwards and seven defensemen, something we saw a decent amount last season from the Kings but not at all here in 2021-22, would also be an option. In that event, Jacob Moverare and Austin Strand are the extras on the backend.

We’ll get the official lineup in a couple of hours, as the Kings and Sharks square off at 1 PM!