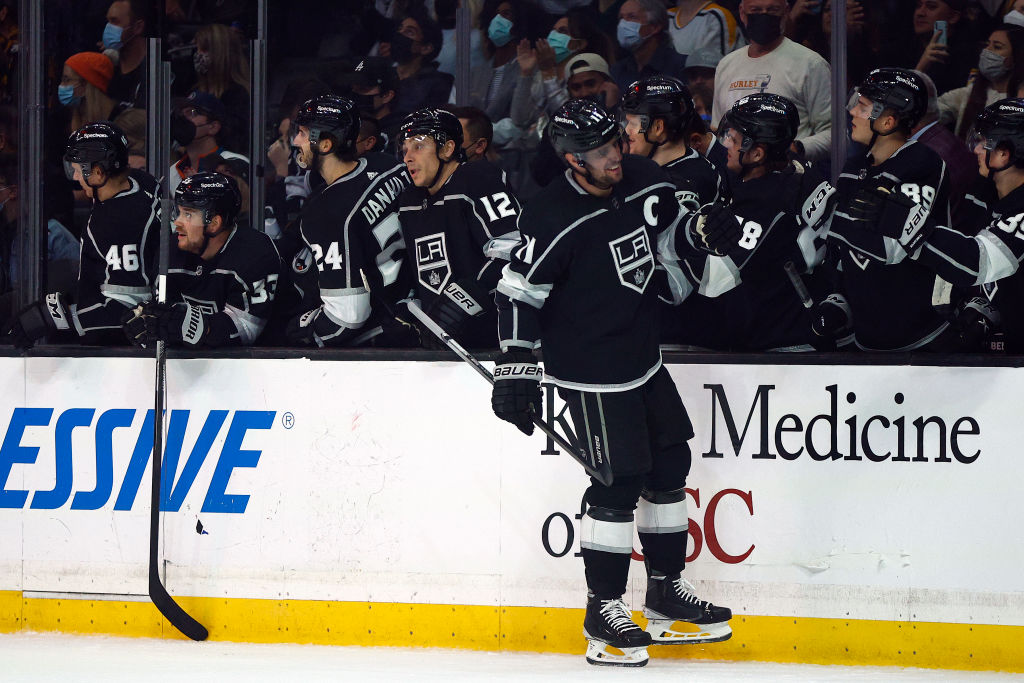 Three goals for the LA Kings in a span of just 83 seconds took a tight 2-2 game and turned it into a lopsided victory Thursday night at Crypto.com Arena. The Kings capped off a seven-game homestand with wins in five of their last six with a 6-2 victory over the Pittsburgh Penguins, scoring four straight times in the final 20 minutes.

Jonathan Quick was the backbone once again for LA, stopping 27 shots to win his 11th game of the year. While Quick wasn’t tested with a large number of shots, he continuously turned aside high quality chances from Pittsburgh, keeping the Kings even or ahead before they pulled away late.

Captain Anze Kopitar scored in the first and third periods, registering his third game of at least three points this season. Sean Durzi also had a big night, assisting on two of his team’s tallies before netting the final goal of the night with less than two minutes to play.

The turning point of the game came when the Penguins, who came into the third trailing 2-1, evened the game at 2-2 on Radim Zohorna’s first of the season off a quick release in the slot after a pass by Teddy Blueger.

90 seconds later, Mikey Anderson scored his first of the year and the Kings were back in front, 3-2. Then Viktor Arvidsson, who has had a knack for scoring quick goals off center-ice faceoffs, found the back of the net just 10 seconds later. LA won the draw and Drew Doughty sprung Trevor Moore on a 2-on-1 with Arvidsson, who went to the net and finished the play to make it 4-2.

Kopitar added on and made it a three-goal game 1:13 later with his second of the night at the front of the net off a feed by Alex Iafallo, who also assisted on Kopitar’s first period goal.

Feeling in control of the game, Durzi finished the night on a high note with his second tally of the season with a shot from the right point off an offensive zone face-off win by Rasmus Kupari that had a primary assist from Dustin Brown.

Earlier in the contest, an even opening period saw each team produce a goal. Pittsburgh struck first off a face-off win on a point shot by Brian Dumoulin that went right to Kris Letang, who banked the puck in off of Quick’s right skate at 4:42 of the first.

After chances for Olli Maatta, who rang the left pipe on a point-blank chance, and his defensive partner Matt Roy, who was stopped by Penguins goaltender Tristan Jarry on an open look in front of the net, the Kings tied the game at 1-1 on a shot by Kopitar at 13:48 of the first. With forechecking pressure from Iafallo in the offensive zone, the captain picked up a loose puck in the slot and saw his shot deflect off Pittsburgh’s Kasperi Kapanen and into the net.

Durzi spoke after the game, as well as forward Samuel Fagemo, who made his NHL debut Thursday playing on a line with Blake Lizotte and Arthur Kaliyev.

Sean Durzi
On his first three-point night
It was good. It was nice to score a goal in a win, which was fun. It was a big game for us, I think giving up that second goal, I wasn’t too happy about it, I made a read maybe a second late, but I got a couple back and the boys really stepped up tonight.

On the team’s response to Pittsburgh’s second goal
Momentum’s real. It’s a big part of hockey, big part of sports. I think after they scored, the response on the bench was really good. A lot of guys just talking it through saying let’s bounce back. Good energy, guys really showed it. To get two in one shift was huge. Feeding off that, building off that, I thought the guys responded well getting pucks behind them and not playing around with it. Those situations after you get one or give one up, playing north, playing hard and good response.

On the team’s confidence after beating good teams in the league
I think once you start beating teams, playing a couple good games in a row, you start to build some confidence as a group and it shows. I thought just the way we play, we have the belief that we can honestly beat anyone if we play our game and playing as a group, it’s a lot of fun, good energy, good atmosphere in the room, good atmosphere on the bench and I think that’s pretty critical, just communication off the ice, away from the ice, the guys have a lot of fun playing the game and it makes it a lot more fun and the effort’s a lot better.

On when he felt he could be a full-time NHL player
Scoring game one gave me a little more confidence to play, I’d say throughout game one it was a lot better. I think I’ve had the belief that I could play in this league for a little while now, even before I was called up. I just wanted the chance to show it. I think having this opportunity is pretty huge, it’s something I’ve been preparing for my entire life and especially the last three seasons in pro. To get it and to try to make something with it is really something I’m working towards. 19 games in and I’m grateful for every one and I’m just going to keep doing my best and try to build and try to contribute. Try to do something that helps the team win games and helps the team move forward.

On what scoring does for his confidence level
It’s huge, especially for an offensive guy. You don’t think about producing because you want it to come naturally, but if you really dwell on that, it hurts your game defensively and hurts you away from the ice, kind of takes your mind off what you can do to help the team. That’s something I’ve learned from the past couple years is that it’s pro hockey, every night you’re not going to score, every night you’re not going to put up two or three points, it’s tight defensively and as long as you just try to do things right away from the puck, move pucks well, especially in my position, those things will come. It was definitely nice to get a couple tonight. It just lets me fall back in my position, play my game and know that I can score in those situations.

Samuel Fagemo
On how it felt to make his NHL debut
It was such a great feeling. It was such a dream come true and a big day for my family and me as well. It was just so fun.

On when he found out he would be playing
I found out around 10:30 in the morning today. I had practice with the Reign this morning so it happened quick and I just focused on the game and went back home and ate and slept so it’s been a busy day for sure

On playing with and against some superstars in his first game
Special for sure. I think I’ve watched those guys since I was four or five years old so it was just so happy and it was awesome being able to sit and watch those guys from the bench.

On seeing his team score three goals in a short span during the third
I think we did a really good job as a team today. We scored a lot of goals and had such a good pace too. It was just fun to sit on the bench and see us score all those goals and actually play was so much fun, it was awesome.

On if it helped to have players in the lineup that he’s played with in Ontario
Yeah, for sure. I think that gave me calmness and confidence too and I think the guys talked to me a lot today. Kopi and those guys and then Kupari and Turcotte and Blake Lizotte and Trevor Moore and all the other Swedes talked to me and helped me. I’m very thankful for them.

Todd McLellan
On what the best parts about the win were
I think two things: they play a fast, aggressive game, they forced us to play that way and we were able to play with them tonight anyhow. And then secondly the response after they scored their second. To come back and put those three goals together was powerful, it deflates the opposition quickly and guys made good, confident plays.

On Jonathan Quick’s play in the game
He made some outstanding saves. Some of them were of the difficult variety especially early. Bad luck on the first one, but let’s face it, teams that are winning games are getting good goaltending, it’s as simple as that. When you lose it’s not always on the goaltender but they’re a big part of the wins.

On if he can see the potential of the younger players in the lineup
Young and old, we talk about that so much here. The kids coming in need to look up and see it done the right way. And our older players, the ones that are still here, do it the right way most of the time and they deserve a lot of credit for providing guidance. If you’ve had a big brother or sister at home that took care of you and showed you the way, it’s a lot easier than walking around aimlessly and we get that from our upper end group. They’re strong believers and supporters of the kids that are playing now and the kids hopefully feel that. But at some point years down the road, that’s going to transfer and we’ll worry about that when we get to it.

On the NHL debut of Samuel Fagemo
I thought he played tremendously. He woke up this morning practicing with the Reign, had no time to think about his first night, very little time to phone family and friends and he had a tremendous game, he played well. Couple good scoring opportunities, pretty responsible all over, good night for him.

Coach Todd McLellan and the @LAKings go on the road after finishing 5-2 on this 7-game home stand 🤫@LAKings | #GoKingsGo pic.twitter.com/MVLr3aEw4z

Notes –
– The Kings extended their winning streak to three games and they have now won five consecutive games against Eastern Conference opponents.
– The Kings’ four goals in the third period are the most by the team this season (tied for third most in the league), and most since March 7, 2020 vs. MIN.
– Dustin Brown (1-1=2) registered his 700th career NHL point (322-379=701). The goal was his sixth of the season and first on the power-play.
– Anze Kopitar (2-1=3) tallied his seventh multi-point game of the season and third of at least three points. He leads the team in assists (15) and points (33).
– Trevor Moore (0-2=2) extended his point streak to three games (1-4=5). Since Jan. 1 he leads the Kings with nine points (2-7=9) in five games. The nine points during that span are also tied for the sixth most in the NHL.
– Sean Durzi (1-2=3) set a career high for points in a game and registered his first career multi-assist game (second multi-point game).

The Kings are scheduled to practice tomorrow at 10:30 AM at Toyota Sports Performance Center.