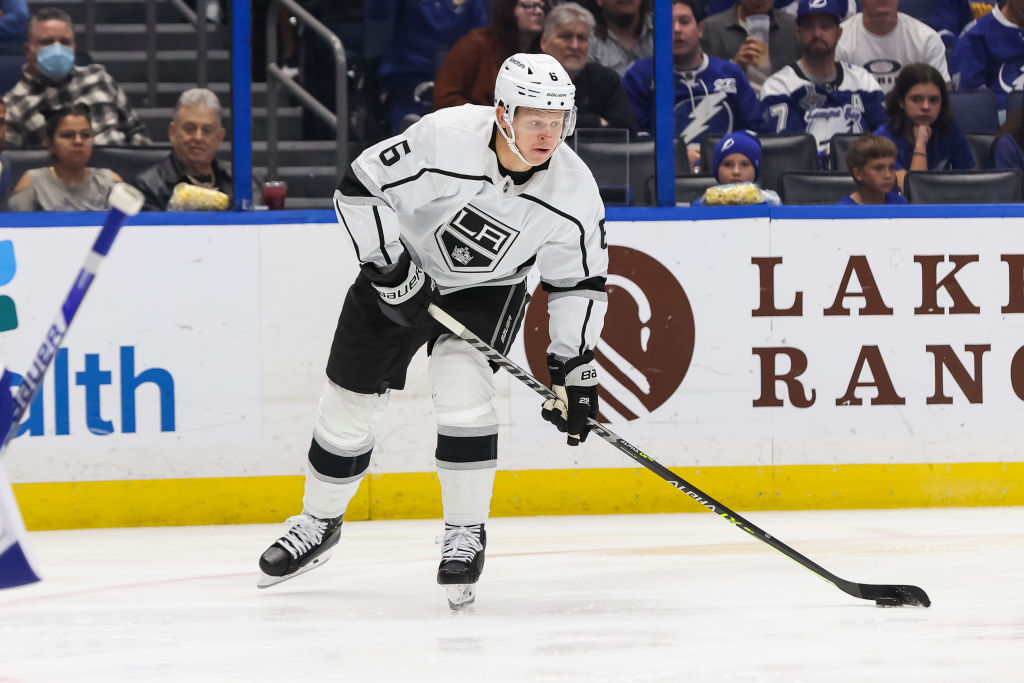 The Kings were back on the ice this morning in El Segundo, as they held a relatively quick team skate between last night’s convincing win over Detroit and tomorrow’s challenge against the New York Rangers.

The Kings welcomed back Alex Iafallo and Alex Turcotte to the ice today, after both individuals served their time in COVID Protocol, though only Turcotte has officially been activated at this time. In the event that both players are ready and activated, that would give the Kings a surplus at the forward position, with 15 players available, with Austin Wagner reassigned to AHL-Ontario.

The @LAKings have made multiple player transactions:

Martin Frk (F) was loaned to the taxi squad

The return of the consistent and productive Iafallo is a welcomed addition for the Kings, getting a usual Top 6 winger back into the fold, missing only two games in the process. It’s also really nice to see Turcotte back, someone who impressed in his first three NHL games, but saw a longer, extended look taken away by COVID Protocol. Both players were among the 12 forwards in white and gray today, indicating returns tomorrow against the Rangers.

Forward Carl Grundstrom and defenseman Christian Wolanin remain in COVID Protocol at this time and have yet to return to practice.

Here’s how the Kings lined up in today’s practice –

While this is how the team lined up today, note that Lias Andersson suffered an injury during today’s practice and is not likely to play tomorrow. Expect to see either Rasmus Kupari or Martin Frk in that spot tomorrow considering the options available at the moment.

Regarding Andreas Athanasiou, Todd McLellan called him a “doubt” for tomorrow against New York but indicated that Thursday’s game against Pittsburgh is still an option at this time, and currently what everyone is shooting for. Athanasiou has been limited to just 11 games so far this season, from training camp on, with his list of absences including a broken finger, COVID Protocol and a pair of groin injuries at various times, which is what he’s recovering from now.

Maat For Teacher
Speaking of returns, last night marked the return of Olli Maatta to the lineup, as he logged 18:51 on the team’s second pairing, skating alongside Matt Roy throughout the game. Maatta had been playing quite well prior to his addition into protocol, with the team’s Southeastern road trip his strongest stretch of the season. That made the timing a bit tough, though Maatta wasn’t looking to focus on that, talking rather about how good he felt last night.

“Yeah, it was, a tough break to not be able to continue that, but I felt pretty good yesterday coming back,” he said, earlier today. “Surprisingly, it didn’t feel too bad, so hopefully I can just keep going from there.”

Originally, Maatta appeared to be on track for Thursday’s game against Nashville, but what looked like a three-day practice slate to get back up to speed saw the middle day removed, as he missed out on Tuesday’s practice with a non-COVID related illness. While on paper that derailed the process a bit, Maatta himself didn’t really feel that it did.

With then an entire week to get back, Maatta felt like he was back at 100 percent yesterday.

“Pretty good, it was fun,” Maatta said of yesterday’s game. “Having COVID and having missed that many days wasn’t easy to do, but I feel like after a couple of shifts, after that I felt pretty good.”

The Finnish blueliner is a key piece for the Kings on the penalty kill, as Todd McLellan noted during yesterday’s media availability. Maatta played a team-high 2:16 on the PK yesterday evening, on a night when the Kings kept Detroit off the board in all situations, something they’d like to see more consistently from that unit.

With Alex Edler out, Maatta has an opportunity to be an important piece for the Kings on the left side, as the veteran presence next to the still young and developing Mikey Anderson and Tobias Bjornfot. So far, with the last five games as a sample size, so good.

From Start To Finish
The obvious storyline from last night was the record-setting first period, right?

The Kings tied a franchise record with 27 shots on goal and were not all that far off from tying the mark for fewest shots on goal allowed either. 27-1 was what the scoreboard read when the buzzer sounded, later amended to 27-2, though the semantics of that mark really aren’t important when factoring in the dominant stretch the Kings put together in all situations, bringing some of the things they did well against Nashville on Thursday into yesterday’s contest.

“In the first period, I thought we were a physical team and that whole Nashville game was a physical affair,” McLellan said. “Maybe not so much in the second or third, but that was a real good chance to carry over. I thought we retrieved loose pucks well with numbers against Nashville, it allows us to throw more pucks at the net, and we had that in the first period too.”

The puck seemingly never left the offensive zone for the Kings, and when it did, it was almost immediately turned around and pushed back the other way. That’s the tale of the first 20 minutes, and there’s little to dispute that dominance.

The final 40, while the Kings closed out a relatively comfortable 4-0 victory, left the team a bit disappointed in terms of how they played. Speaking with Maatta and McLellan today, both felt that the level of play dropped in the second and third periods, something that perhaps had the team’s attention today when reflecting back.

“I think we got away from our game in the second period,” Maatta said. “Maybe we started feeling good about ourselves after the first, we were really good in the first and then they started pushing and we didn’t respond that well. I don’t think we got the puck through the neutral zone at all, our breakouts weren’t good enough. I don’t think they got many shots, or scoring chances, but they definitely had the puck in our zone a lot more, I don’t think we played in their zone enough in that second period.”

Heading into tomorrow’s game against the Rangers, McLellan knows it will take a 60-minute effort against one of the league’s best teams. He indicated that he feels the Kings are capable of producing that level of start again on Monday, even if perhaps not in the 27-2 shots on goal variety, but certainly of the level of play variety.

“I’d like to think that we can have that first period again, against the Rangers, but I’m not counting on it,” McLellan said today. “We’re going to have to play a full 60 minutes and the group knows that. Now, they have to do it.”

Kings Add Bergevin To Hockey Ops Staff
Lastly, the Kings announced this afternoon that Marc Bergevin has joined the organization in a consulting capacity as Senior Advisor to the General Manager.

Entering the 2021-22 season, Bergevin was in his 10th year as General Manager of the Montreal Canadiens. Prior to that, he spent seven seasons as an executive in the Chicago Blackhawks organization, including Assistant General Manager in 2011-12.

Rob Blake on Bergevin
Marc brings a wealth of knowledge and experience to our hockey operations staff and will be a valuable addition to our group. We look forward to his contributions.

Bergevin on joining the Kings
I’ve enjoyed my time away, but I’m excited to join the LA Kings and become an active part of helping the team reach its objectives. I have a great amount of respect for Luc (Robitaille), Rob, and the staff they have in place and it’s an honor to provide my input to this highly-regarded group.

We can use this report as a de facto Ontario Reign game thread, with the Reign slated for a 3 PM puck drop on home ice against Stockton. Enjoy that one Insiders, Kings back in action with a stern test tomorrow evening against NYR.