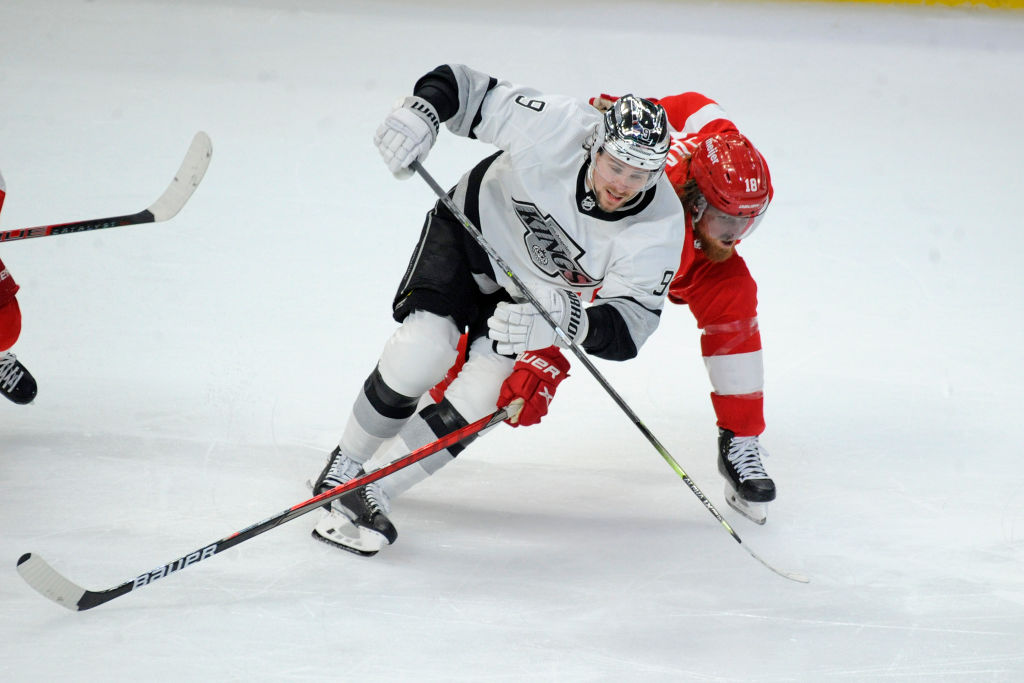 The LA Kings turned up in a big way on Saturday evening at Crypto.com Arena, as they skated to a 4-0 victory over the Detroit Red Wings.

Phillip Danault, Drew Doughty and Adrian Kempe all scored during regulation, while Trevor Moore added an empty-net goal in the victory. Goaltender Cal Petersen made 21 saves to earn his first shutout of the season, in his first game back in the lineup since December 6.

The Kings turned a record-setting first period into a 2-0 lead at the first intermission. As a part of 27 shots on goal, tying a franchise single-period high, the Kings opened the scoring 6:27 into the game, as Phillip Danault cashed in just after a power play expired, to put the Kings up early.

The hosts doubled their advantage less than three minutes later, as Drew Doughty wired home his fourth goal of the season to put the Kings ahead by a pair. After Rasmus Kupari drove the offensive zone down the right wing with speed, he curled back and hit a trailing Doughty, who hit the shot first time and past Detroit netminder Alex Nedeljkovic for the goal.

With much of the second period elapsed, the Kings found a third goal less than four minutes from the buzzer, as Kempe scored shorthanded for his 15th goal of the season. Sprung the other way by defenseman Matt Roy, Kempe protected the puck to the outside and made a nice skill play towards the inside to free up space and snap a shot past Nedeljkovic, extending his team’s advantage to 3-0.

As the seconds ticked down in the third period, the Kings added an empty-net tally from forward Trevor Moore to cap off the scoring at 4-0. Moore now has six points (3-3-6) in the team’s five-game since the holiday break.

On the team’s start to tonight’s game
I think we just built on last game, I thought we were the better team against Nashville 5-on-5, I thought we stuck with it tonight and we started right where we left off the game before. The guys were hungry, ready, obviously a big win.

On if he felt tonight was a “culture” win for the Kings
Absolutely. The culture was really on tonight, and even last game, we did give up two PK goals, but I thought 5-on-5 we were the better team. We’re building a good thing right now, with the culture and we’ve just got to bring it every game, it will give us a chance every single game.

On being an assist short of a Gordie Howe Hat Trick
I put some pressure on my winger there. I think we were the better team at the beginning and he wanted to get something going. I was better on draws, he just asked me and I said yeah.

On what the Kings did better on special teams tonight
I think it’s everything. Hunting the puck, structure, we didn’t give up anything in the neutral zone and Petey was awesome. Big comeback from him and some key saves to give us a chance to win the game.

On the pressure to start the second period after such a strong first period
Yeah, for sure. We talked with ourselves after the first, we knew they were going to push and do something better for sure. We just stuck to our game.

On the start to tonight’s game
I guess typical coach, you want our team to play that way throughout the whole night, and we fell off a little bit after that, but a tremendous start. On our toes, getting to a lot of loose pucks, winning faceoffs, playing the way we wanted to play. Goaltender makes his first save in a long time on a breakaway, which could have changed all of that momentum, but he stood his ground and did a really good job. Then, after that, I thought a little bit of our game got away from us a little bit. Shift length got a little long, we were disjointed, one fresh, two tired and then got a little bit sloppy, but sometimes that’s human nature, to have that happen. I guess the teachers want the classroom to be perfect all the time and there’s no such thing, so we found it a little bit frustrating.

On the penalty kill tonight
It did its job, starting with the goaltender, he made some saves. Faceoffs, clears, stuff that we talked about the other day that are really hard to practice, shot blocking, clearing attempts. You have some things that you can work on, but those parts of the game was a lot better than it was against Nashville.

On Cal Petersen and his play tonight
First start in a long time, his first save was a breakaway, it was a tremendous save, then he didn’t get a lot and had to be prepared for that last line of defense and mistakes that we had. He made some really good saves, he made one when they pulled their goaltender and everything gets a little bit tighter if it goes to 3-1, but he made a tremendous pad save there. I thought he looked really good. I’m happy for him, I’m glad that the guys dug in to preserve the shutout for him as well.

On if he believes any momentum in 5-on-5 play carried over from Nashville to today
I’ve said this before, I think each event is its own entity. I do think that the way you practice carries over into the game. We came out of the Christmas break, we were rehashing this again, not being prepared to practice. Our four-day period without a game, we were pretty good at practice. There was no whining from the coaching staff, we got done a lot of things that we needed to get done. Yesterday was light, but it still had purpose and they gave us what we needed from them and it was a pretty good game. Tomorrow is another test in practice, won’t be long, but there will be some things we’ll need against a good Rangers team.

On Sean Durzi and the assertiveness shown in his game tonight
For me, I saw that earlier, I saw that when he first got up here. He was running the power play, the power play actually changed when he arrived. We were better on the blueline than we were earlier, and I think that’s just continued. He’s rapidly playing his way into a full-time job in the National Hockey League, which is a real good thing for us with the number of injuries that we’ve had.

– The Kings registered 27 shots in the first period, tying the franchise record for most shots in a period. The only other time it happened was almost 12 years ago to the day (Jan. 7, 2010) at home against Detroit. They also outshot the Red Wings 27-2 tonight, tied for the largest shot deficit in a single period in the league this season (FLA outshot WSH 27-2, Nov. 30, 2021).
– Cal Petersen stopped all 21 shots he faced, earning his second career shutout (last: Nov. 19, 2018 at STL). It marked his first start since Dec. 6, 2021 at VAN.
– Dustin Brown (0-2-2) registered his second multi-point game of the season and is just one point away from reaching 700 in his NHL career. Brown’s two-assist game was his first since 11/2/19 against Chicago.
– Adrian Kempe scored his team-leading 15th goal of the season. He has four goals (4-1-5) over the last six games. Kempe is just one goal shy of his career-high (16, 2017-18). The goal was also his second shorthanded goal of the season and the fifth of his career.
– Drew Doughty scored his fourth goal of the season. Doughty continues to lead all Kings defensemen in goals, assists and points on the season, with at least one point collected from 11 of 16 games played this season.
– Phillip Danault scored his sixth goal of the season, tonight’s game-winning goal, and has four points (2-2-4) in the last three games.

The Kings are scheduled to return to the ice for practice tomorrow morning at 11 AM at Toyota Sports Performance Center.