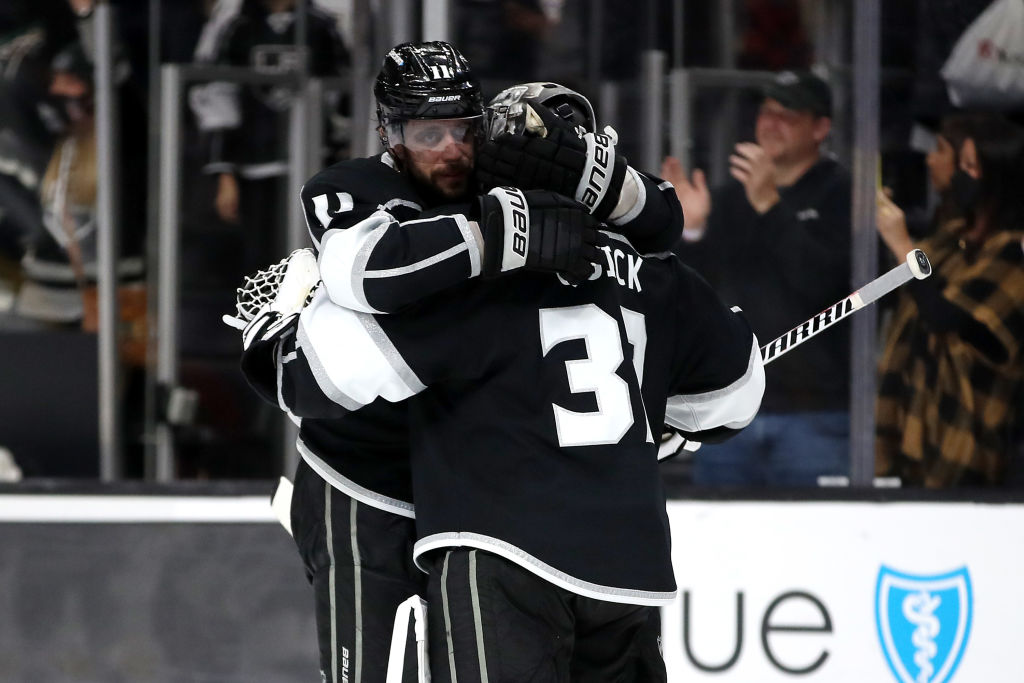 Just once before in a calendar year did the Kings play more regular-season games than they did during 2021. The lockout impacted 2013 calendar year stands atop the chart, with 2021’s 88 games played falling one short. The lockout impacted 1995 year, and the oddly imbalanced 2009 schedule fall two games behind 2021 in Kings history for the most eventful years in terms of regular-season games.

From a team standpoint, the Kings ranked 20th in the NHL with 84 points during 2021, tied for the fourth most amongst Pacific Division teams. Remarkably enough, all three California based teams collected 84 points during the 2021 calendar year.

In terms of scoring leaders, Anze Kopitar stands atop the charts, as you might imagine. Kopitar tallied 78 points from 88 games played in 2021. The remarkably consistent Alex Iafallo, who has posted a points-per-game pace of between .55 and .63 in each of the last three seasons, including his current pace in 2021-22, places second with 50 total points. Five Kings had 40 or more points during the 2021 calendar year, with Adrian Kempe, Drew Doughty and Dustin Brown also netting 40+, as Iafallo and Kempe each posted the highest-scoring calendar years of their NHL careers.

For Kopitar, 2021 was tied for the second-highest scoring calendar year of his career. Kopitar netted 83 points in 2010, on the heels of a couple of the strongest months of his career. Kopitar also had 78 points during the 2018 calendar year, and collected 76 in 2009, 2013 and 2017 respectively. No surprise that both halves of his 2017-18 season, when Kopitar was a Hart Trophy Finalist, are involved in those figures.

2021 also represented a year of several exciting debuts, with eight different Kings prospects playing their first career NHL games with the big club. Last season saw Arthur Kaliyev score in his first game as a King, the 21st player in franchise history to do so, only to see Sean Durzi become number 22 ten months later.

We saw first-round selections Rasmus Kupari (2018), Alex Turcotte (2019) and Quinton Byfield (2020) at the NHL level for the first time in 2021, while late-round selection Drake Rymsha and undrafted signings Austin Strand and Vladimir Tkachev all played NHL games. Good stuff throughout the organization.

Looking at the goaltenders, four different netminders played a game for the LA Kings. Cal Petersen was the most frequent figure between the pipes with 46 games played, while Jonathan Quick played in 42. Looking strictly at starts, the total is nearly identical, favoring Petersen 43-42. Troy Grosenick and Garret Sparks each appeared in two games, while Matthew Villalta and Jacob Ingham each served as the backup goalie on one occasion but did not play in a game.

Lastly, 2021 was my first season contributing from a Kings perspective here on LAKingsInsider. We saw the site transition to one that features multiple contributors, with a different style and a different focus. I have appreciated, as have others, the fervor, passion and loyalty shown by the readers and commenters on this site. I understand that the site is different in some ways than it’s been in the past, and that the styles and contributions from our past Insiders have made this site what it is today. Our goal is to continue to build off of those contributions as we move forward.

I’ve taken a lot of pride throughout 2021 that this site is the only place around where you can find first-hand practice notes, quotes from players and coaches and storylines surrounding the LA Kings on a daily basis. If you’re looking for day-to-day happenings, this is still the place to find them, and that won’t change as the calendar flips from 1 to 2.

The tremendous following here on this page is not lost on me, and it’s appreciated each and every day. Thank you, Insiders, and here’s to a new year.