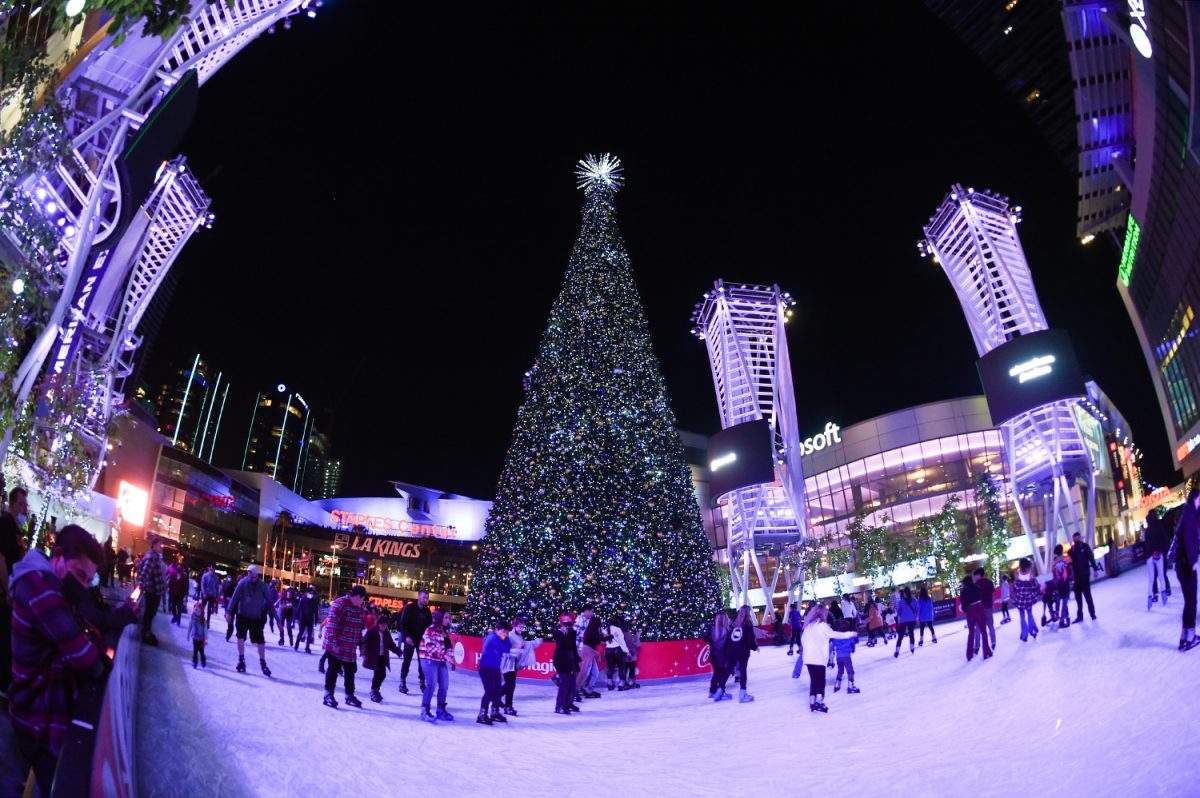 Whether you skate like Drew Doughty or you hug the walls as you make your way around the rink, LA Kings Holiday Ice is the place for you.

After a one-year hiatus, Holiday Ice is back, located in L.A. LIVE on Xbox Plaza right out front of Crytpo.com Arena. Though the temperatures around us have perhaps given us this feeling on their own over the past few days, Holiday Ice aims to bring that feeling of winter here to Southern California, transporting you from the breaches and freeways to a true, wintery feeling.

“I think the best part about it is that you’re in Southern California, but for a moment, when you’re on our rink, you feel like you’re in a Winter Wonderland,” Natalie Matsumoto, Sr. Director, Marketing with AEG, said. “I think it’s pretty magical that it’s an outdoor rink and it’s real ice, it makes Holiday Ice unique.”

You’re probably as tired of hearing that “COVID-19 has impacted us all” as I am of writing it. Talk about fatigue. While it’s exciting to have Holiday Ice back here this season, there was certainly at least some doubt exiting last season, considering the uneasiness of the circumstances around us, but an obvious demand and hope for its return during the 2021-22 season.

Managed from a business standpoint by the Kings and AEG, the ice is controlled by American Sports Entertainment Company (AESC), the same group responsible for managing Toyota Sports Performance Center, as well as a number of rinks around Southern California.

From an operational standpoint, while it was easy to get back on the horse so to speak, there were new CDC and governmental guidelines that needed to be followed to get things back up and running for this season. That means extra time, extra resources to make sure that things are at a level where everyone attending feels safe and comfortable.

Those extra steps have certainly been a positive, with sanitization efforts stepped up this season considering the usage of public skates if skaters don’t bring their own.

“We work really hard, we sanitize everything, we take extra time to make sure that everything is sanitized before we hand it out to anybody again,” Terri Berman of AESC said. “We sharpen our skaters on a rotating basis, they are rental skates and they do get used a lot.”

One major selling point for Holiday Ice, on top of the availability of freshly sharpened skaters, here with Holiday Ice is the presence of…..well, ice! Real, outdoor ice in Southern California which isn’t the case at all of the outdoor rinks you see here this time of year, managed and maintained with the same practices used on the ice the Kings practice and play on every day.

It’s that extra level of detail, among other factors, that Berman has noticed as a big hit with those attending.

“The real ice is a big deal, people really like that, and they like the lights, they like all the action and the Kings part of it,” Berman said. “That’s a big factor. Everybody loves it.”

There have been several factors that have led to a real interest in skating this season, though.

People are looking to get out and about again and that’s been seen by those involved with Holiday Ice.

“It’s very telling that people did miss the rink last year and there’s no other rink like ours,” Matsumoto said. “If you’re going to do outdoor skating in LA, our LA Live, LA Kings Holiday Ice is the one to do it in. It’s a tradition, we have it every year, it’s our ninth year hosting it.”

That tradition has created a nostalgic feeling, one that Berman has seen and noticed among the participants this season. Having managed the facility for several years, she’s seeing people who started at Holiday Ice as learn to skaters and are now moving around the ice with ease.

“Definitely, they’ll come over and say to me, ‘hey lady, remember me, I can skate backwards now,’” she said, with a laugh. “A lot of people who have been out there come back and ask for jobs, as soon as they’re old enough. I’ve hired a couple of people just off of being past skaters.”

If you haven’t yet made it out to Holiday Ice, whether for your first trip, or as a returning skater, there’s still plenty of time to do so. With a week left in the program, Holiday Ice will remain up and active through January 7.

“Everybody’s happy, it’s exciting, there’s a lot going on,” Berman said. “A lot of energy, a lot of families, it’s like the happiest place you could be. Nobody’s in a bad mood, everyone is just having a blast. People wait in line for an hour, two hours and we don’t get any complaints.”

An hour in line, with no complaints? Must be pretty darn magical.

For more information, including a full list of FAQ’s regarding Holiday Ice, visit here. LA Kings season-ticket holders save $5 off the price of admission per session, while Delta SkyMiles members receive $3 off tickets. General Admission Tickets are available on-site only, while fast passes and Delta offers can be redeemed here.

Holiday ice is open from 4 PM to midnight, daily, with four sessions totaling 90 minutes each available. Meaning, if you come to a Kings game on the team’s upcoming homestand, you can visit Holiday Ice either before or after the game, with the opportunity to turn the day into a full hockey experience.

“If you want to come before or after an event at Crypto.com Arena, or make it a date night, we have a bunch of restaurants a movie theater and even bowling within a short walk of the rink,” Matsumoto said. “It’s not just ice skating, but it’s a whole experience.” 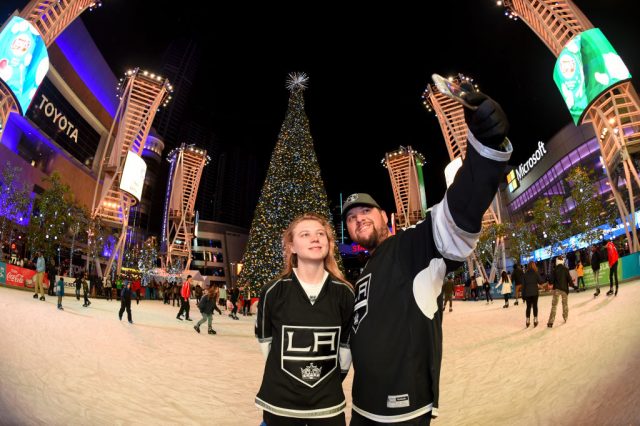 LOS ANGELES, CA – NOVEMBER 30: Los Angeles Kings fans take a photo on the ice of the LA Kings Holiday Ice LA Live prior to a Los Angeles Kings game against the Winnipeg Jets at STAPLES Center on November 30, 2019 in Los Angeles, California. (Photo by Juan Ocampo/NHLI via Getty Images)