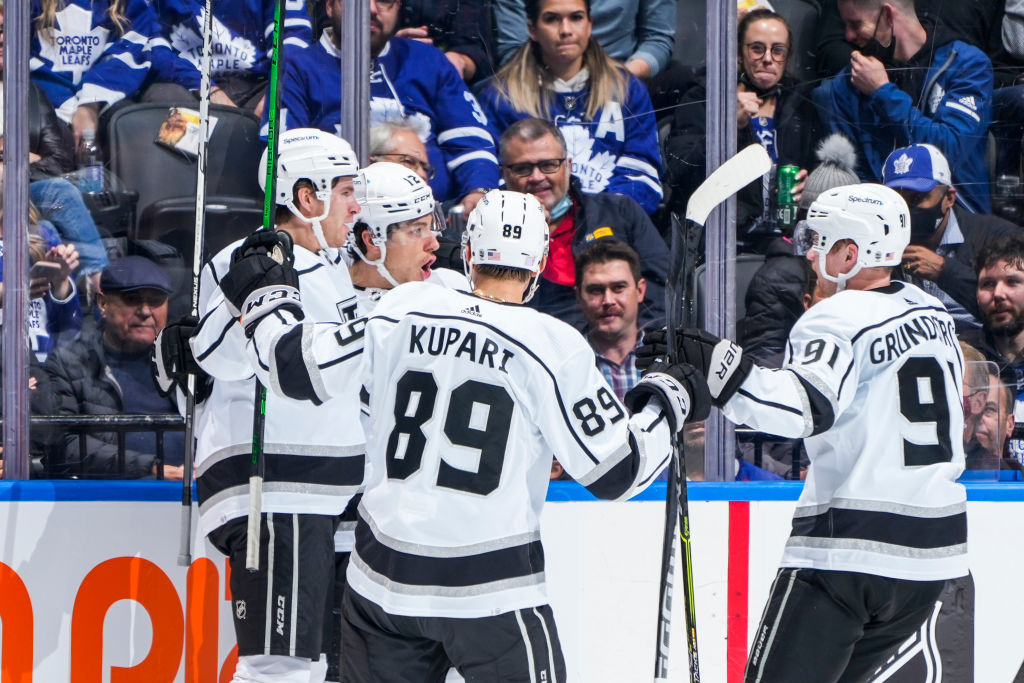 The LA Kings returned to the ice this afternoon at FLA Live Arena in Sunrise, FL.

The Kings were down a pair of forwards, with Andreas Athanasiou and Jaret Anderson-Dolan not on the ice. Athanasiou suffered a lower-body injury in last night’s game against Tampa Bay during the third period and did not return to the game, while Anderson-Dolan was assigned to the AHL’s Ontario Reign earlier today. That leaves the Kings with 13 forwards on the active roster, including Blake Lizotte, who was activated out of COVID Protocol earlier today.

Back with the team was defenseman Mikey Anderson, who missed last night’s game with a non-COVID related illness. Anderson traveled with the team on the inner-state flight and returned to practice today. Per Todd McLellan, Anderson is currently on track to play tomorrow against the Panthers, assuming all goes according to plan.

On the ice in total were 13 forwards, seven defensemen and two goaltenders. Here’s how the team lined up during today’s practice –

Updates from FLA per Todd McLellan 🌴

– MIkey Anderson skated today, “feeling much better”
– Blake Lizotte is on-track for tomorrow assuming all goes according to plan over next 24 hours. Still needs to be activated
– Andreas Athanasiou is out for the rest of the trip pic.twitter.com/foSKbyKSK0

Speaking with McLellan after practice today, he provided us with updates on Anderson, Athanasiou and Lizotte, with two out of the three trending positively for tomorrow.

Anderson – He missed yesterday’s game but McLellan said that he is feeling “much better” today, which is a good sign for both player and team. Assuming everything remains that way, expect to see him back in action tomorrow, in his usual place alongside Drew Doughty.

Lizotte – Lizotte has now practiced twice with the team, yesterday’s morning skate and today’s full-team practice. He has obviously cleared COVID protocol from a health standpoint, it’s now just up to conditioning and readiness to play tomorrow. Like Anderson, assuming everything stays the course, we could see him return against the Panthers.

“Lizzo is on track to go tomorrow,” McLellan said. “I talked to him before practice and I have to meet with him after to see how he’s doing in the morning. Health, conditioning should be good, it’s just knocking the rust off a little bit and make sure he’s good.”

Athanasiou – Andreas Athanasiou is out for the trip, and returned to Los Angeles for “evaluation and treatment” per McLellan. A very tough break for a player who just recently returned to the lineup, three games prior, after a spell in COVID Protocol. With his immediate future uncertain, Athanasiou is at the least staring down his third multi-game absence of the season.

Off The Back, On The Board, Viktor Arvidsson
There’s a scene in Lord Of The Rings, when Legolas and Gimli are tracking how many bad guys they take out, and Legolas shoots down this fierce looking animal that’s carrying several Orcs, but Gimli says it only counts as one.

Is that too nerdy?

Either way, every goal in the NHL only counts as one, no matter how it goes in or what it hits on the way through. Connor McDavid’s dance through four New York Rangers a few weeks back? One. Viktor Arvidsson’s goal last night, that saw a deflected point shot hit his back and get past Tampa Bay netminder Andrei Vasilevskiy? One!

Arvidsson said with a laugh that he was really just trying to get out of the way on the play, after he saw Matt Roy shoot the puck from the right point, and the deflection happened to strike him last on the way through. Arvidsson recalled one other time throughout his NHL career that he’s gotten one off his back, so this had a bit of Back To The Future vibes as well.

That stat sheet will always just show that 1 in the goal column. All count the same, only counts as one, take your pick, but Arvidsson has four goals and nine points over his last nine games played, no matter how the count.

Of those four goals, three of the four have come via a deflection off a shot from the point or the outside. The Kings have started to get more and more shots through from the point as of late, and it’s resulting in more offensive production.

“Yeah, I think we have a high shot volume, every game and our D are involved,” Arvidson said. “They get involved in the offensive zone too with shots and we try to get to the net, get tips and stuff.”

While we’re on the topic of Arvidsson, let’s also touch on perhaps the most consistent line on the team, the second line. Arvidsson has flanked Phillip Danault and Alex Iafallo as of late, on a line that seems to give you the same type of game, night in and night out.

“I feel like we read off of each other very well,” Arvidsson said. “Phil and Al, they’re both really strong puck protectors, heavy on the puck and creative, make plays, and Phil is really good in the circle. I think we matchup well and read off each other really well.”

And that’s not even a reflection on the performance of individuals, but rather the placement of individuals. The Kings have had a variety of different personnel moves this season, and in seemingly all of the, the third line’s personnel has been impacted, for better or for worse.

Get this – Through 27 games played, we’ve seen 12 different combinations on the third line. That’s nearly every other game.

We’ve seen usual Top 6 players Andreas Athanasiou, Dustin Brown and Adrian Kempe there at times. We’ve seen younger players such as Arthur Kaliyev and Rasmus Kupari play there, as well as players now with a few seasons of experience in Carl Grundstrom and Trevor Moore. And that’s not to mention the trio that started the season on that line in Gabriel Vilardi, Vladimir Tkachev and Lias Andersson.

This particular shakeup was an injury to Athanasiou last night in Tampa Bay, which will cost him at least the rest of this trip. Reunited now is the trio of Grundstrom, Kupari and Moore, who featured for a stretch when the Kings visited Eastern Canada, when Arvidsson was in COVID protocol. This isn’t a situation that’s unique for the Kings, but it’s certainly impacting them nonetheless.

“Yeah, it’s tough, as you said for every team,” McLellan said. “Pairs, lines and what not, and I don’t see that changing throughout the year with the situation that not just hockey but every sport in the world is in right now. It’s unpredictable what’s going to happen. The third line has been in flux, it’s been different players, different situations. Blake Lizotte coming out of COVID Protocol and being ready to play, if we choose to use him, maybe that will solidify a line that was playing really well and we’ll get to work towards a consistent third line. The third line is a pretty important line on a team and we’d like to get some unity there as quick as we can, and keep it.”

From Russia, With Love
I was waiting for the Kings to play in an overtime game to ask this question, but I was curious as to Todd McLellan’s take on the 3-on-3 strategy currently being employed by Sergei Fedorov in the KHL.

Fedorov has pulled his goaltender during the overtime session once the team has gained control of the puck and he’s been 2-0 in doing so. McLellan pointed out one key difference in the rules, which is that, to the best of his knowledge, in the KHL, you would still earn one point in that situation. In the NHL, if you pull your goaltender in overtime and give up an empty-net goal, you lose the one point you earned, which creates substantially more risk for an NHL team to employ that strategy.

“If I am correct, I don’t believe they lose the single point and that makes a huge difference,” McLellan said. “If you pull the goaltender [in overtime in the NHL] and lose, you lose your point. I think you might see teams who need two points, and a point doesn’t matter to get in, maybe you’ll see it if there are two, three seconds left on the clock for a faceoff, but the margin for getting in and out is often, one, two or three points, so you can lose a draw and lose a game. Now, I know you can put your goalie back in after each of the faceoffs, but different rules.”

A great point, to nullify my question!

Kings are scheduled to return to action for morning skate tomorrow, in advance of game number two on the current road trip, against the Florida Panthers. More to follow as we continue to get clarity on how tomorrow might look for LA.

Sergei Fedorov does it again! CSKA pulls goalie in OT and wins it in 2nd straight game! pic.twitter.com/Nt6eLyHCNM