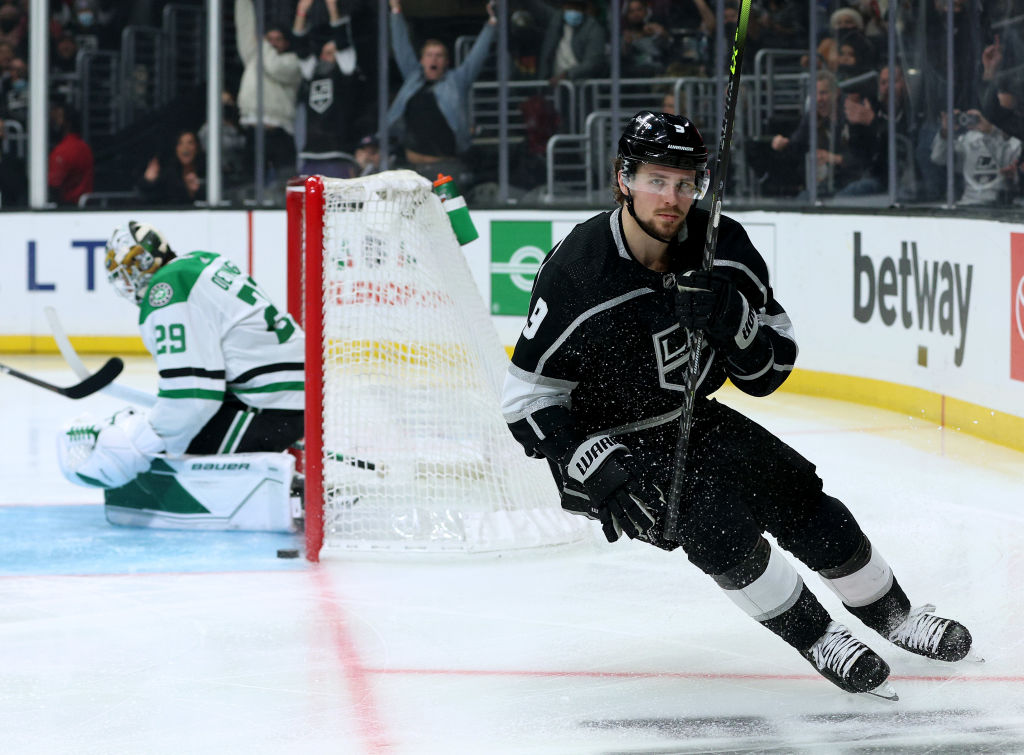 The evolution of Adrian Kempe has been a sight to behold.

Just two seasons ago, Kempe was at a crossroads of sorts. A center for his entire career, the Kings made the decision, early in the season, to scratch the forward for a game and he eventually began a transition to playing on the wing.

Last season, in a campaign shortened by COVID, Kempe showcased his talent, but also his inconsistency, productive in spurts against spells without a goal. On the best of nights, Kempe was a difference maker on a team that was short of them throughout the lineup, though other nights he left you wanting more.

This season, it’s all come together over the first 27 games.

Kempe has 11 goals from his first 27 games so far this season, which exceeds 30 goals over the course of an 82-game season if you do the math. Kempe has had stretches during his career where he’s produced at and above that level, but he hasn’t maintained it for this type of run yet. The chances he’s producing, both quantity and quality, suggest that perhaps the 25-year-old forward, a pending restricted free agent, is putting together the pieces successfully.

“I do see him putting it together,” Todd McLellan said, of Kempe. “In the past, he could put up a big load of goals, and then it got away from him. Now, it seems to stay there, it’s fairly consistent. He’s found a good home with Kopi on that wing, he’s playing the right way and to me, his energy level, confidence on the ice, the way he carries himself on the ice, that energy is always there. I’m not sure it was always there in the past. He believes in his game right now, teammates believe in him, let’s keep that consistency where it is.”

Kempe has been an important part of the Kings’ top line since he was placed on that unit when the Kings made some lineup changes to spark more offensive production. With the Kings struggling to find consistent scoring from their forwards, Kempe’s four-goal streak in early-November coincided with a good run of form for the team, with the Kings winning each of those four games. In past seasons, that production might have halted there, but Kempe has continued to find the back of the net since, including a pair of multi-goal games.

A season ago, the fit alongside Kopitar wasn’t quite as snug as it has been this season. While Kempe brings pace and an element of dynamic play to Kopitar’s left, for whatever reason his game seemed to shine brightest when he was the “alpha” on a line, to use McLellan’s phrase.

Now, Kempe has done a good job of bringing those alpha qualities to another alpha’s line, and the results have been noticeable.

“He’s earned the respect of the upper-end of the lineup, he handles situations much better and he sheds the negative off much quicker than he was in the past,” McLellan said. “The fact that he was able to build his game when he was the alpha on the line, I think allows him to be where he is now.”

It hasn’t just been about the goals this season either. While those have certainly come, Kempe’s production has been supported by his chances created. Even on nights when he’s not scoring, he’s creating quality chances, looking no further than his breakaway opportunities against Vancouver and Tampa Bay, nights he did not score on. Even take the win over Dallas, when Kempe did score. His goal came off a really good look, a breakaway, but it was one of five scoring chances he had that game.

The quality and quantity alike in the chances Kempe is generating this season have been at the highest rates of his career. Kempe’s totals on a per/60 basis when it comes to shot attempts per game, scoring chances per game and high-danger chances per game are all at the highest rates he’s produced at the NHL level, as is his expected goals for, which is a metrics that pulls all of those chances into a number to evaluate.

At the same time, while slightly above his career marks, neither Kempe’s individual shooting percentage or on-ice shooting percentage are drastically out of whack, which you often see in a career year. Those numbers have fallen right in line with his overall body of work, a sign that perhaps, now entering the prime years of his career, that Kempe is putting it together and not just riding his luck.

“Confidence comes in, he’s taking on more responsibilities on the power play, penalty killing, he feels better about his whole game,” McLellan said. “He’s entering the prime of his game, so we better see it now, and we’re beginning to. It’s the evolution of development. Not everybody is Auston Matthews. It takes time for some individuals to eventually get there, and Adrian’s getting there.”

The other aspect to Kempe’s growth has come away from the puck. While it’s been his gaudier offensive totals that have stood out, he’s finding other ways to impact the game as well.

McLellan spoke recently about the Kings needing to do a better job of winning when they have their “B” game. While at the team level, we haven’t seen a ton of that this season, on a personal level, Kempe has shown the ability to impact games without putting the puck in the net. An exceptional skater, Kempe’s game fits an aggressive, hunt the puck mentality to a T. He’s shown an ability to win pucks back both on the forecheck and the backcheck and that’s allowed him to add to the team’s success on nights that maybe don’t result in points.

McLellan was included to agree.

The Kings Head Coach has referenced Kempe’s backchecking ability multiple times this season and it all comes down to how well he can use and apply his legs. Skating fast for the sake of skating fast doesn’t benefit anyone, but when that talent is applied to other areas of the game, combined with hard work, it’s noticeable, as it has been for Kempe on a number of occasions.

“I think that the way he uses his legs has an impact on the game every night and if you’re not looking for it, you don’t notice it,” McLellan said. “He has an impact as much without the puck as he does with the puck.”

Where Kempe goes from here, and how he continues to apply consistency to his game, could have a lot to do with the fortunes of the Kings in the games to come.

On a team that is still in search of more consistent offensive production, Kempe has been a bright light in helping to add a scoring weapon to the team. As Viktor Arvidsson starts to get hot, and the production from the blueline continues to increase, with support from a bottom six that is hopefully finding some consistency, getting all of those various areas of production clicking at the same time could be exactly what the Kings need to find success.

Can Kempe himself reach the pace he’s on over the course of a full 82 games?

“If I keep creating the chances, as many as I’ve been creating so far, I think I can get to it,” Kempe said. “Obviously it’s a tough number and the season gets harder and harder towards the end of the year, when you’re trying to get to those playoff spots, teams will be better overall and not risk as much as maybe they do at the beginning of the season. I’ve just got to keep going to the net and try to find the goals I have so far. I would like to see myself score that many goals, but it’s a long season and it’s going to be tough.” 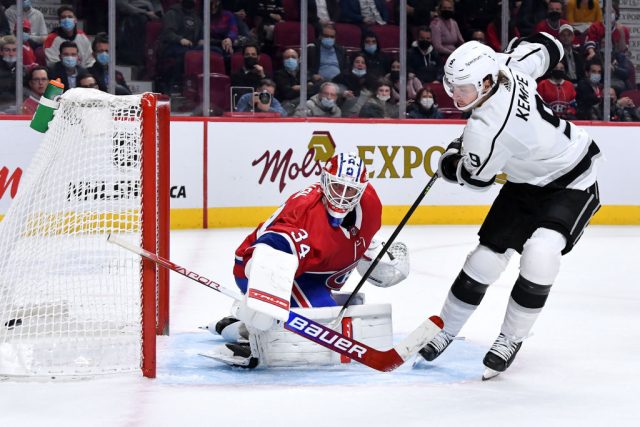 MONTREAL, QC – NOVEMBER 9: Adrian Kempe #9 of the Los Angeles Kings scores an overtime goal on goaltender Jake Allen #34 of the Montreal Canadiens in the NHL game at the Bell Centre on November 9, 2021 in Montreal, Quebec, Canada. (Photo by Francois Lacasse/NHLI via Getty Images)