Drew Doughty, Back In Action 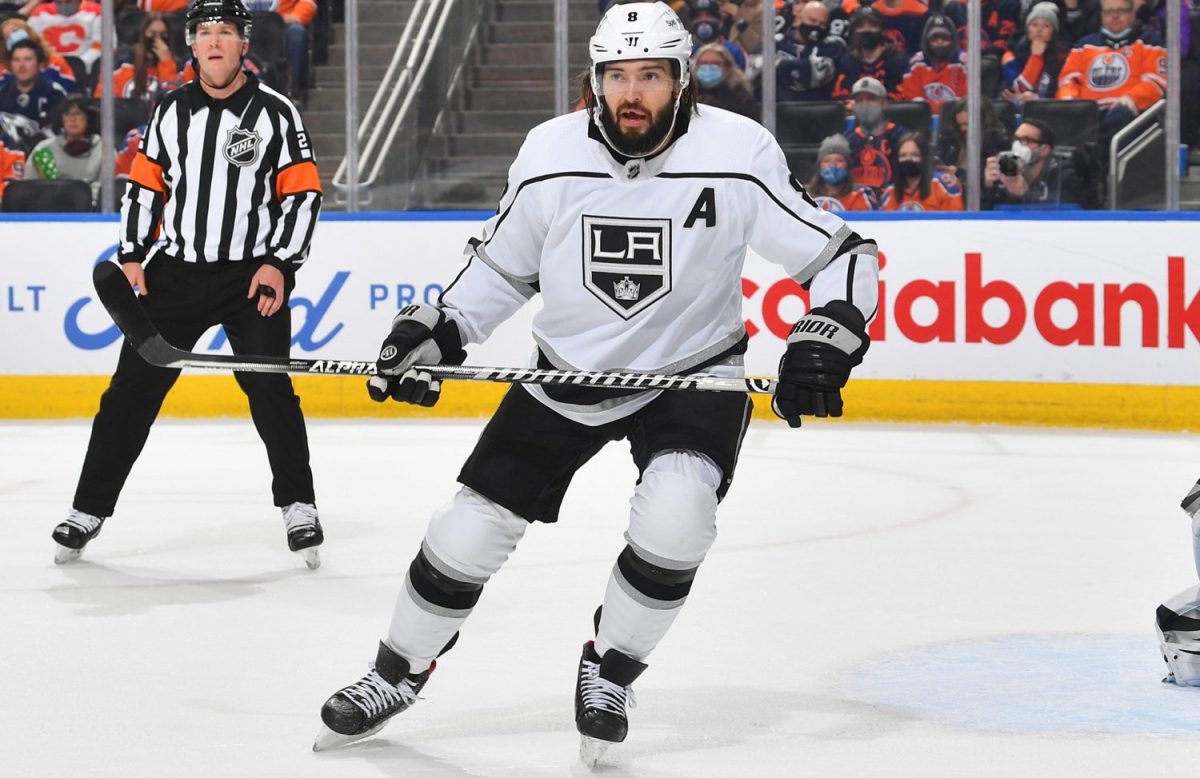 When originally announced, back in October, we all probably should have known that Drew Doughty would have worked his way back into the lineup sooner than two months.

There are a lot of reasons you could propose as to why.

Perhaps it was his compete level, that spans beyond in-game and on the ice.

“I’m very impressed by him,” forward Phillip Dananult said, in a recent interview with NHL Network. “His compete level is way higher than anyone I know, it just shows his passion and he’s dedicated to perform.”

Perhaps it was having a partner with him in the rehab process, in young Quinton Byfield, to help push the process along for both players.

“Drew’s never, knock on wood, really been hurt, so it was new for him,” Todd McLellan said. “To have each other, in the gym in particular, to push in those situations, it’s valuable to have somebody around you and give you a little bit of encouragement.”

Perhaps, though, Doughty is just not cut from the same cloth as the rest of us. When asked if Doughty was a human, forward Alex Iafallo responded simply.

After watching Doughty’s first game back, the 5-4 shootout loss against Anaheim, it would be hard to argue with you, Alex.

Doughty logged 27:55 of ice time in that game, in his first game removed from being out of the lineup for nearly six weeks. 34 days after his timetable was estimated as six weeks to resume skating and eight weeks to return to game action, and 39 days from his injury itself, Doughty was back. When we saw him in the media room, after the game, Doughty looked like he could’ve gone out there and play another 27:55 if it was required of him.

To the outside observer, there was no reintegration process when it came to Doughty’s first game back.

We saw a future Hall of Famer, stepping into his usual role, alongside his usual partner, against his usual competition. And, with nearly 28 minutes of time on ice, play his usual number of minutes. Though we didn’t see it, Doughty admitted he felt a few butterflies, for the first time in a while, before he got into the flow.

I think every player on our team touched the puck on this play. 🔥#GoKingsGo pic.twitter.com/0YFS7jg7ya

Doughty was involved in all situations, featuring against top competition from his first night back in. His most common opponents faced at even strength against Anaheim were Adam Henrique and the red-hot Troy Terry. Versus Calgary, the names were Johnny Gaudreau and Matthew Tkachuk. Follow that up with Connor McDavid in Edmonton and Bo Horvat in Vancouver, and you’ve got a strong start to a list of high-quality opposition.

Playing against those types of individuals, Doughty called his in-zone defending the area he felt took the longest to get back. Things like skating, shooting, puck work are all aspects of his game he was able to get back throughout his rehab process, things that were easy to do when skating on his own, and in a non-contact jersey. Facing that top-level opposition, however, in a game situation, was an adjustment.

“I would say my defending in my own zone,” Doughty said. “Guys rolling off, just how quick it happens, just defending 1-on-1’s, realizing where guys are in the d-zone I think is the toughest adjustment.”

The results, so far, have been par for the course. Through his eight games played this season, Doughty’s shot attempts against align almost identically to last season, slightly lower in a good way on a per-60 minute basis. His chances against in more dangerous metrics have been greater, but so have his chances for. When the sample size is just eight games though, it’s hard to truly evaluate those kinds of metrics, but at a surface level, he’s where he needs to be.

Take the Edmonton game as a primary example.

Connor McDavid logged more minutes against Doughty and Mikey Anderson than any other defensive pairing. Naturally, what you want if you’re the Kings, but not always possible to arrange when playing on the road. McDavid was held scoreless, as was his partner in crime, Leon Draisaitl, in just the second time this season that neither player tallied a point on the same night.

“A huge amount [of pride],” Doughty said. “You look at the matchup before the game, whether or not they’re on the same line and if you’re going to have to play against both of them. You do everything you can to not let them score, you play them physical, you try to frustrate them…that was our goal coming into the night and we did a great job.”

That’s not to mention that, in the same game, Doughty had three points, his second three-point game of the season.

What Doughty’s return has also done is reset the batting order, to borrow a popular McLellan phrase.

Doughty is the team’s undoubted number-one defenseman, and slotting into that role helps to align the rest of the group to set up favorable situations for the Kings. Doughty’s absence forced a lot of additional burden onto veterans Matt Roy and Alex Edler, with Doughty’s regular partner, Mikey Anderson, and Tobias Bjornfot logging difficult matchups on a nightly basis.

All four of those individuals carried themselves very well in expanded roles. We saw the youthful duo of Bjornfot – Anderson shutdown Alex Ovechkin’s line against Washington, with the calming presence of Edler and Roy helping to settle the team down when things looked set to run off the rails.

Doughty’s return helps relieve some of that pressure, though the hope is that his absence helped to grow the rest of the unit as well.

“It helps everybody,” McLellan said. “There [was] so much pressure on Anderson and Bjornfot to carry a lot of the load, but also on Royzie and Eds, those types of guys had to take more on and play bigger and bigger minutes. It’s been really good for them, hopefully they’ve gained a lot of experience and trust.”

With Sean Walker confirmed to be out for the season, the Kings are now as fully stocked on the backend as they will likely be, meaning everyone is in the place they’re likely to be from this point out.

With Doughty at the top of that list, and everyone else now slotted in behind, it’s full systems go on the backend, starting with number eight. 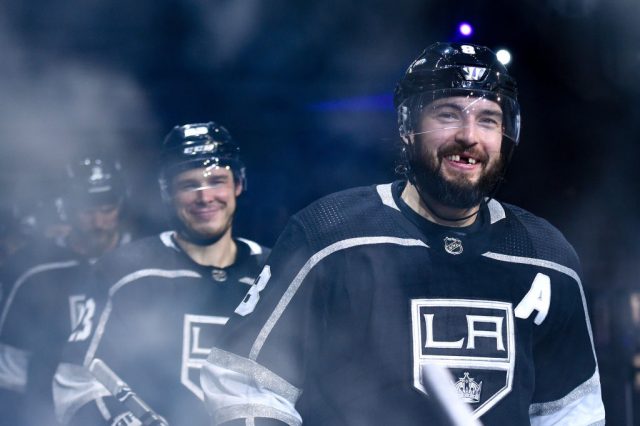 LOS ANGELES, CA – DECEMBER 2: Drew Doughty #8 of the Los Angeles Kings and Dustin Brown #23 smile prior to the third period against the Calgary Flames at STAPLES Center on December 2, 2021 in Los Angeles, California. (Photo by Juan Ocampo/NHLI via Getty Images)