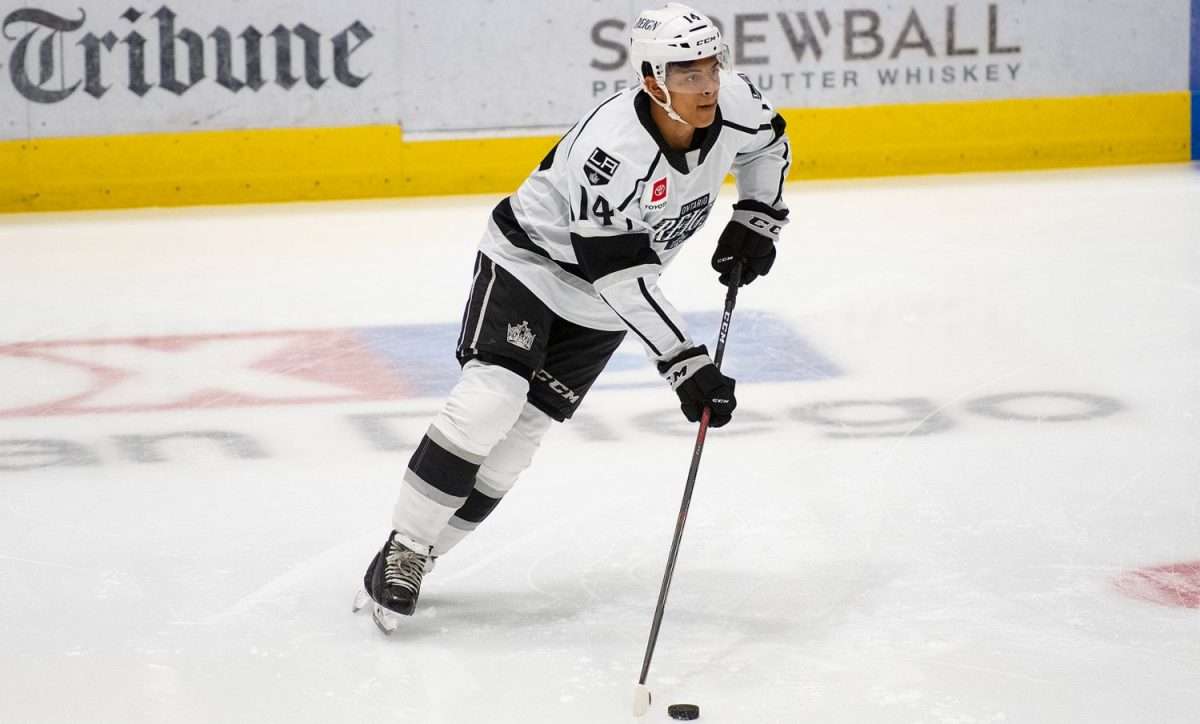 Akil Thomas has officially been activated from the injured / non-roster list and will be a welcomed addition to the Ontario Reign roster when he jumps over the boards for his first shift in over six months.

The former second-round selection by the LA Kings in 2018 is expected to be in the Reign lineup for Saturday’s contest in Bakersfield after recovering from an offseason shoulder operation that came at the end of Ontario’s abbreviated 2020-21 season.

It was an exciting rookie season for Thomas, who appeared in all 40 of the team’s contests and finished second on the club with 26 points. The Toronto native was one of only three forwards to reach double figures in goals with 11, joining other Kings prospects Arthur Kaliyev and Samuel Fagemo. Thomas’ best offensive play came in the final days of the season, finishing the campaign by scoring points in the team’s final eight games, including a first-period goal in their only playoff action.

But it was a long road back for the 21-year-old, who has been skating with Ontario and acclimating himself to both old and new teammates since the beginning of November. Thomas mentioned he’ll have a few nerves to work through but he’s been chomping at the bit to get back into game action.

“It’s been a long summer,” said Thomas. “I’m relieved and a little bit nervous already just because it’s my first game in such a long time. Nervous in a good way, I just want to get out there and I’m looking forward to it.”

One thing yet to be decided is who Thomas will have next to him on his line. The forward said he has no idea where he’ll be in the lineup, but that hasn’t diminished his excitement to add to Ontario’s already potent offensive attack. The Reign are one of the top offensive teams in the AHL and are tied for the league lead, averaging just over four goals per game (4.06).

The versatile Thomas played both center and wing last season, skating alongside a variety of different linemates throughout the course of his rookie season. His ability to play in various roles, in various situations, should make it an easy integration.

“I think the coolest thing is just being able to watch the whole season up to this point and seeing from my point of view what we need to fix up, do better, and what we need more,” Thomas said. “Maybe I can bring just that and try to implement my own game back into play as well. I’m looking forward to showing what we need a little bit more of.”

The final steps of his recovery were the most frustrating, as Thomas had the strength he needed but wasn’t given the go-ahead medically until this week. Not rushing the process is something that was important with this type of injury, something Thomas had to begrudgingly accept.

“After such an intensive surgery, you just need a certain amount of weeks before your shoulder can take a hit,” Thomas said. “I was very strong early on, so that was kind of frustrating because I was strong enough to play but just the weeks weren’t there. It was a good problem to have, being too strong, but I feel great. I’ve been feeling like I’m ready to play for a while now so I’m not going to be hesitant or anything like that.”

Even though Thomas hasn’t been watching from the bench in game situations, the difference in results for this year’s Reign team has been easy to see from anywhere. Ontario got out to the hottest start in team history, winning nine of their first 10 before finally suffering a regulation loss.

Thomas joined the team on a recent trip to Tucson and has been in attendance for most of the team’s games so far this season. He’s gotten the look from above, and often times players learn different things when watching from the press box.

“It’s way different,” Thomas said. “With the team we have, I think it’s easier to come back after not playing for so long on such a good team. I’m familiar with our systems and most of the players and I’ve gotten to see the new players so much that I kind of know what their tendencies are. I’m really happy that I don’t have to sit and watch every game going forward and I can finally join them and earn a part of the team.”

Join them he will, with the second-round pick ready to roll, hopefully coming tomorrow evening.