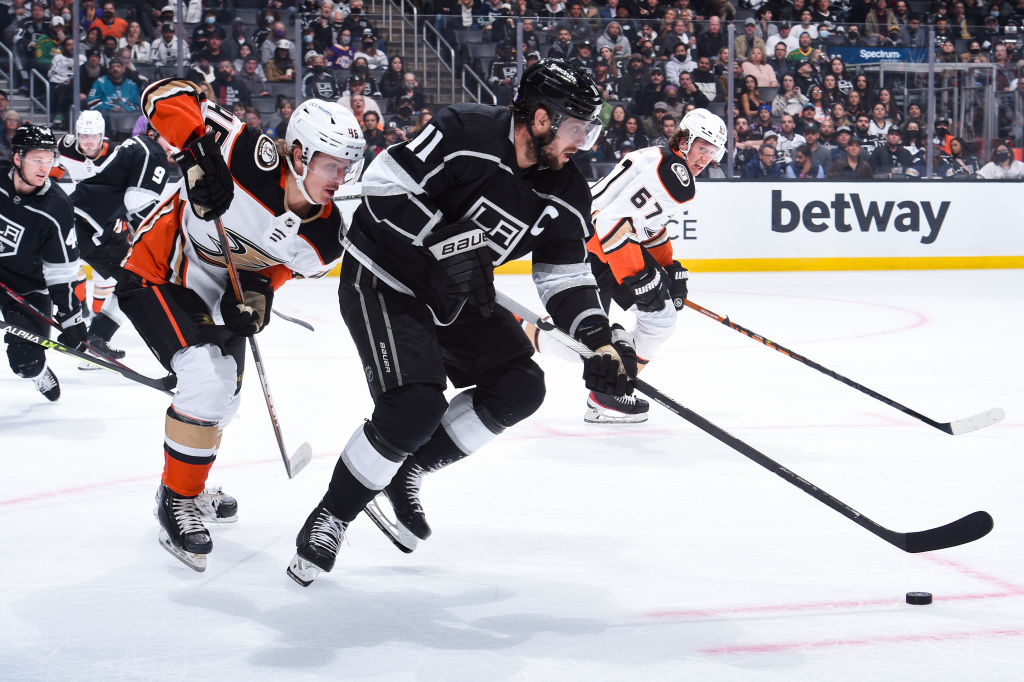 The LA Kings mounted a spirited comeback to earn a point, but fell short during the shootout, in a 5-4 defeat against Anaheim.

The Kings got two goals from Alex Iafallo, and multiple points from Anze Kopitar and Matt Roy, as well as an assist from Drew Doughty in his first game back from injury. Jonathan Quick made 32 saves, taking the shootout loss decision.

The first period came and went with a volume of shot attempts for the Kings, but no goals for either side. The Kings were led by Doughty and defenseman Alex Edler, as well as forward Viktor Arvidsson, with three shots apiece during the opening 20 minutes.

Anaheim opened the scoring just past the halfway mark of the second period, as Troy Terry netted his 14th goal of the season. After the Kings killed off their first penalty of the evening, Terry worked the puck out of the corner, moved into the left-hand circle and fired off the post and in to get the visitors on the board.

The Kings responded less than three minutes later, however, as Iafallo knotted the score at one. Phillip Danault cycled the puck down below the goal line to Viktor Arvidsson, who circled the net and hit Iafallo. The New York native saw his redirection hit an Anaheim skate and deflect in. Iafallo’s goal was his seventh of the season as Arvidsson extended his point streak to three games with the primary assist.

The Ducks regained their advantage in the closing minutes of the second period, however, as Kevin Shattenkirk fired home for a 2-1 lead. Off a neutral zone turnover, Shattenkirk led the rush, used defenseman Matt Roy as a screen and shot glove side for the goal, his fifth of the season.

The visitors added two more early in the third period, less than 30 seconds apart, to open up a three-goal advantage. First, with Anaheim on the power play, some nice puck movement fed Cam Fowler at the center point, where he beat Quick for a 3-1 lead. Shortly thereafter, forward Isac Lundestrom weaved his way into the attacking zone, and was pokechecked by Quick, but the rebound hit a clash of Kings sticks and deflected in for an own goal.

The Kings stormed back, however, with three goals of their own to tie the game at four late in the third period. First, Adrian Kempe got a deflection in the slot on a Matt Roy shot from the point, to bring the hosts within two. The Kings then thought they pulled back within one just seconds later, but Carl Grundstrom’s potential third goal in two games was disallowed for a high-sticking infraction in front.

Iafallo actually pulled the Kings back to 4-3, as Doughty’s effort from the right point deflected off of his leg and in, giving Iafallo two goals on the evening. Dustin Brown got off the schneid in a big way to bring the Kings all the way back, netting his third goal of the season to tie the game at four late in regulation.

After a scoreless overtime period, Anaheim was the victor during the skills competition in the shootout. Lias Andersson scored in round one for the Kings, followed by goals from Trevor Zegras and Shattenkirk for Anaheim to give the Ducks the extra point.

Drew Doughty talks about being back with the guys and tonight's #FreewayFaceoff
@LAKings | #GoKingsGo pic.twitter.com/7Ud41whqHt

On how tonight’s game turned from a tight-checking game to a shootout in the third period
From our end of it, we made some mistakes. Shot went into our own net, we weren’t sharp to start the third, took a penalty when we didn’t need to and they scored there. At the other end, we kept throwing pucks at the net and we finally created by using our shot from the blueline, instead of passing it off to the side, and we were hungry around the net. That was our end of the goals against and the goals for.

On seeing Dustin Brown get off the schneid with a big goal for the Kings
He’s an important part of our team, he’s been snakebit for a while, frustrated, moved up and down the lineup. To get one, hopefully that gets him going. He’s a proud, proud veteran player, longtime King, he carries that with him and it’s hard. Maybe now, he’s a little bit free to relax. It’s hard to believe we’re talking about a guy that’s spent that many games in the NHL, but it happens.

On Drew Doughty’s energy and impact
27 minutes, pretty solid, calms things down, good vision, willing to shoot the puck. He wasn’t on the ice, I don’t believe through the eye-test right now, for many scoring chances against. We’re happy to have him back.

On his comfort level with Doughty’s game
Yeah, and overtime, he’s good in that situation. We rolled two or three defensemen for a full five minutes, you rack up the minutes quite quickly there, but we were comfortable with him. We knew we would be and now it’s sustaining that once the wear and the tear gets back on the body.

On coming back from three goals down to force overtime
Well, it doesn’t come easy, it doesn’t happen often. Momentum is a strange thing, you can gain and lose it quickly and we’ve been on the other side of something like that too where it gets away on you, it’s like a big snowball just rolling down the hill. Fortunately for us, it was in our favor, but we couldn’t finish the night.

On a lack of panic following the disallowed goal
Actually, I think that moment, that actually kept the momentum going for us, we can do this, it’s happening for us, let’s keep it going. Kopi did a good job, he made his rounds around the bench, let’s go, because you could feel it. He did a good job there too.

– Forward Viktor Arvidsson and defenseman Sean Durzi each extended their point streaks to three games with assists in tonight’s shootout defeat.
– Forward Alex Iafallo scored two goals tonight, his second multi-goal game of the season. Iafallo is tied for the team lead with eight goals this season.
– Forward Adrian Kempe also tallied his eighth goal of the season tonight, tying him with Iafallo and Anze Kopitar for the team lead.
– Kopitar (0-2-2) and defenseman Matt Roy (0-2-2) each collected two assists tonight.
– Defenseman Drew Doughty collected an assist and played 27:55 in his first game back from injury. Doughty’s game tonight was his first played since October 22 against Dallas.
– Forward Dustin Brown scored his first goal in 15 games with the game-tying goal late in the third period. Brown is one goal shy of Bobby Carpenter for 20th all-time against Americans.

The Kings are scheduled to return to the ice tomorrow morning at 11 AM at Toyota Sports Performance Center.