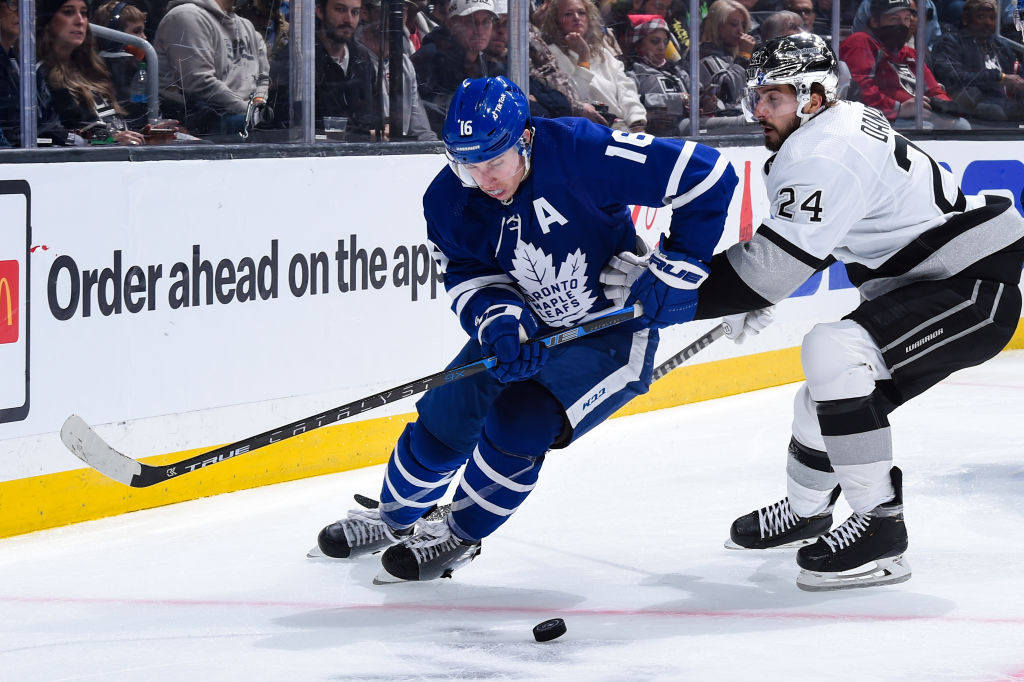 The LA Kings dropped their fifth consecutive decision on Wednesday evening, a 6-2 final against the Toronto Maple Leafs.

Defenseman Sean Durzi made his NHL debut, scored his first NHL goal and collected his first career NHL point in the defeat. Forward Viktor Arvidsson also had a multi-point night (1-1-2) as he scored the other goal for the hosts.

Toronto scored the lone goal of the first period to take a 1-0 lead through 40 minutes of play. After the Kings killed the game’s first power play, forward Alex Kerfoot got himself loose in the slot off the rush, found the puck on his backhand and beat goaltender Jonathan Quick for the game-opening goal.

The Kings tied the game early in the second period, however, off a power-play tally from forward Viktor Arvidsson. Defenseman Sean Durzi, in his NHL debut, got a shot through from the center point, that Arvidsson deflected, to get the hosts on the board. Arvidsson’s goal was his third of the season, with the Kings netting on the man advantage for the first time in five games.

The second period was all Toronto from that point on, however. The Maple Leafs scored four times in the middle stanza to open up a 5-1 advantage. First, Wayne Simmonds created an odd-man rush goal, as he hit Pierre Engvall for a tap-in tally less than two minutes after Arvidsson’s marker. John Tavares made it 3-1 just over two minutes after that, as he got a deflection on William Nylander’s shot from the right point.

Auston Matthews made it four goals for the visitors midway through the second, as he got on the end of a rebound, off a Tavares wraparound effort, to put Toronto ahead by three. Jason Spezza concluded the second-period scoring, with a slap shot from the right-hand circle on the power play, to make it 5-1.

Toronto opened the scoring in the third period, as Michael Bunting was credited with an early goal. After Jonathan Quick made what would have gone down as a highlight-reel save, the rebound deflected off the post, off of Philiip Danault’s skate and in for the sixth goal of the evening for the visitors.

Late in the third period, Durzi turned in the brightest moment of the evening for the Kings, as he scored his first career NHL goal on the man advantage. The rookie defenseman carried the puck into the slot, and snapped a shot glove side on Toronto netminder Jack Campbell.

Hear from Durzi and Head Coach Todd McLellan after the game.

On the emotions of his NHL debut and his first career NHL goal
Yeah, it was nice. Obviously garbage time in the hockey game, but to get it out of the way was good. I thought there was a lot to clean up, but it’s a good feeling.

On having his family in attendance for a special night
Yeah, it was awesome. It was kind of last minute, mom made her way from the Dominican Republic, but it was special to have them here. They’ve gone through a lot with me, my biggest support group. My girlfriend was here too, that was great. It was nice to have them here.

On handling the nerves coming into today
The team was really good about it throughout the day. Lemieux actually sat down with me before the game, said a couple nice words, which I thought really calmed me down a little bit. It’s a great group. Not the result we wanted, especially for my first game, but I thought a lot of the guys, especially the leaders, Kopi, Brownie, I could say a lot of names on the list. The team was really good about it and made it as easy as possible for me.

On how he felt on the power play
Good, there’s a lot of great players on that power-play unit. I was lucky enough to get that first shift with them, and I tried to make the most of it. You talk about the hockey IQ on that unit, the skill, everything. I felt good with the extra man, it went well there.

On what he felt went wrong for the Kings during the second period
I thought they were a really good transition hockey team, a lot of skill, speed coming from different areas and it showed. For myself, it felt like a fast hockey team and obviously in my first game, I knew it was going to feel like that, and even a little bit faster than I expected. Puck management in the neutral zone probably wasn’t the best, a lot to clean up there. Just managing pucks, getting them in, maybe a little bit more communication.

On if tonight’s result was a one-off, or if things he didn’t like from other losses were just amplified today
Well, let’s hope it’s a one-off, we won’t know until we play the next, but tonight was obviously not a good night for us. I thought that one team skated like they were on top of the ice, smooth and fast, and another team just sloshed through the slush. We were slow, when we were quick to make decisions we had poor execution, we weren’t together. It just wasn’t a good night against a real good hockey team and that’s what happens.

On Jonathan Quick tonight
Not one bit on Quickie. In fact, we’d probably be talking about a lot of other goals if it wasn’t for Quickie, so not even remotely close on the goaltender tonight.

On Sean Durzi’s play toinght
I thought Durz did what he was supposed to do offensively, he was real good on the power play. Obviously, what a great night for him to remember from an individual perspective, a goal and an assist on the power play, but he didn’t get what he wanted maybe team-wise. Tough game to play, when the team is not good around you in your first one and you’re playing against a real good club that can move the puck around a lot. We liked what we saw, we’re going to keep working with him and make sure that he improves as time goes on. Real good start.

On the moment with Durzi scoring his first career NHL goal
Unfortunately for Durz, the emotional component to his goal was minimal, because of when it happened and the score of the game. I’ll give our guys credit, they were all excited for him, they were, the bench was all standing, guys were excited, but it would’ve been so much better for him as an individual if it was 3-2 or whatever it might be. Really happy for him, we all are, but the emotional investment into the goal wasn’t as great as it could have been.

On if he saw any positives to the changes he made during the third period
Hard to evaluate them, we were just trying to find some legs for guys that didn’t have legs, that were moving slowly and really sloshing around out there. We mixed things up to find a little bit of energy for a period. We’ll look at it, there may be some things there that we can continue on with. We just wanted to find our team game again, I’m not sure that we did that. We tried something, we’ll see.

– Sean Durzi (1-1-2) became the 22nd player in Kings history to score a goal in his first NHL game (most Recent: Arthur Kaliyev, 2/1/21). He was the first defenseman to do so since John English in March 1988.
– Durzi logged 15:52 of ice time during his NHL debut, including 1:13 on the power play.
– Viktor Arvidsson (1-1-2) scored his third goal of the season and collected his first multi-point game as a member of the LA Kings.
– The Kings scored multiple power-play goals this evening, marking the third time this season they have done so. They also snapped a four-game scoreless drought on the man advantage in the process.
– Anze Kopitar (0-1-1) registered his team-leading tenth assist of the season.

The Kings are not scheduled to skate tomorrow. The team is slated to return to the ice on Friday morning at Toyota Sports Performance Center.