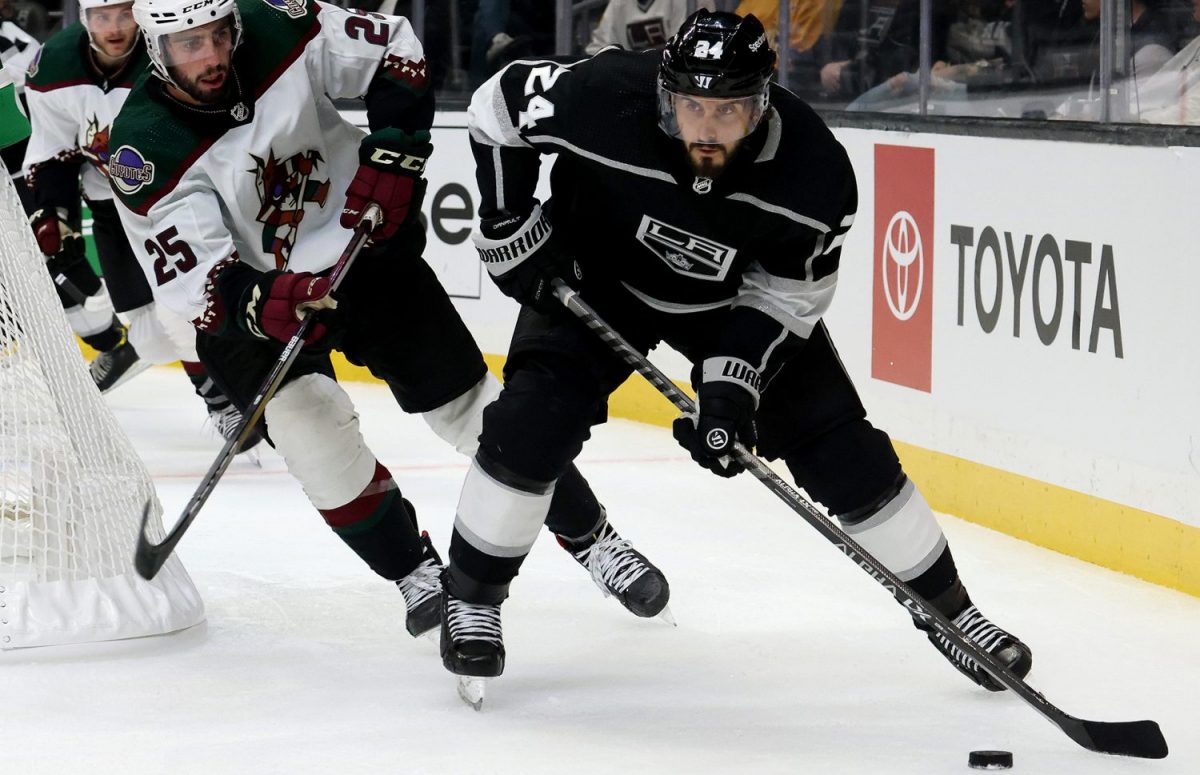 TONIGHT’S MATCHUP: The LA Kings are right back at it here this evening, as they host the Arizona Coyotes for a 7 PM puck drop at STAPLES Center.

HEAD-TO-HEAD: The Kings and Coyotes met eight times during the wacky 2020-21 season, with the Kings winning the season series with a 5-3-0 record. It was Arizona, however, that won three of the four games played in Los Angeles. Anze Kopitar led all skaters in the head-to-head series with eight points (1-7-8) from eight games played, and the captain is over a point per game in his career versus Arizona with 84 points (22-62-84) from 82 games played. Defenseman Kale Clague appeared in two of those games last season and tallied three points (0-3-3), including the only multi-point game of his NHL career on 4/7/21.

KINGS VITALS: The Kings will conclude their fourth back-to-back set of the season tonight as they host Arizona. The Kings enter tonight’s action at 2-1-0 in such situations, including a win from the lone pair of back-to-back games played at home, a 3-2 victory over Buffalo on Halloween.

The team did not hold a morning skate today, considering the back-to-back, so we won’t have specific details regarding tonight’s lineup until much closer to game time. When asked yesterday specifically about the possibility of defenseman Sean Durzi playing tonight, Todd McLellan said it was too soon to provide lineup updates for today, though he added that forward Lias Andersson and Carl Grundstrom are “ready” if called upon.

“Potentially,” he said when asked about Durzi yesterday evening. “I can’t tell you who’s going to be in or out tomorrow, I still have to get an injury update tonight and look at the game. We have a couple of forwards who are ready to go as well, so we’ll see where we’re at.”

For reference, here’s how the Kings lined up yesterday –

Considering the back-to-back, the expectation is that Jonathan Quick will be in goal tonight, after Cal Petersen started yesterday’s defeat against Carolina. Quick has faced Arizona 46 times in his NHL career and if he gets the nod this evening, he’ll have faced Arizona as frequently as any other opponent (Anaheim, 47). The 35-year-old netminder is 22-20-4 in his career versus the Coyotes, with a .905 save percentage and a 2.51 goals-against average.

COYOTES VITALS: The Coyotes also played yesterday, as they skated to a 2-1 overtime victory over the Detroit Red Wings on home ice in Arizona. Forward Clayton Keller netted the game-winning goal in overtime to earn tonight’s visitors their third win of the season.

With the travel, there’s no expected morning skate for Arizona. Goaltender Scott Wedgewood – an Ontario Reign (and Adirondack Thunder!) alum – was in net for the Coyotes yesterday evening. If Wedgewood gets the nod again today, it would be his third career start versus the Kings, bringing a 1-1-0 record, a .867 save percentage and a 3.92 goals-against average from the prior two. Arizona’s other option in net is rookie Karel Vejmelka, who has appeared in 12 games so far this season, his first campaign at the NHL level.

Per Arizona’s team account, here’s how the Coyotes aligned yesterday –

After a disastrous start to the season, that saw them drop 11 consecutive games, Arizona has righted the ship at least a bit, with now points in their last three games, including a pair of victories. For the rebuilding Coyotes, growing pains were expected, though plenty of NHL-caliber talent still comes to STAPLES Center this evening, in a matchup that cannot be underestimated.

Fourth Line Fury
In 9:52 of ice time at even strength yesterday, the Kings fourth line, consisting of Brendan Lemieux, Blake Lizotte and Arthur Kaliyev registered 19 shot attempts for, compared to four against, with a 9-2 advantage in scoring chances and a 6-1 advantage in high-danger chances. That line turned their volume into two goals, one apiece for Lizotte and Lemieux, playing perhaps their best game of the season.

That’s saying something too, because that trio of players has been pretty darn good since they were assembled midway through the Kings recent winning streak.

The mantra of that line has typically been to work hard and keep things simple. We saw that at times, with both goals coming off of hard-working plays. On Lizotte’s goal in the first period, Lemieux tied up his man in front, affording Lizotte a bit of space between the circles, where he beat Carolina netminder Frederik Andersen clean with his shot. The second was another net-front battle won by Lemieux, as he got on the end of Matt Roy’s point shot and swept home the rebound for the line’s second marker of the afternoon.

No two players were on the ice for more shot attempts for than Lizotte and Lemieux, with Lizotte’s play earning him a bump to the team’s second line late in the game. With the Kings trailing 5-4, Lizotte was on the ice with just over two minutes remaining, in search of a tying goal.

“That line was tremendous, I thought, and there’s no reason they shouldn’t be out there,” McLellan said. “They created numerous chances, didn’t give up much. Just because Blake is deemed a fourth-line player, there’s nights where he outplays the third line or the second line and needs to be out there. That’s why he was and that’s why his line was out there.”

Many try to diminish Lizotte’s contributions, but over his last nine games, he’s +31 in terms of shot attempts and he’s been on the ice for five goals for, compared to just one against. Lemieux has been just as noticeable, at +32 in that span, and he’s got six goals for, versus just the one against.

Certainly a solid night for that line, and seeing their contributions continue goes a long way with establishing depth up front for the Kings.

Back-To-Back, But Better
Back-to-backs suck, no way around it. These are challenging situations for the players and situations that traditionally put the team on the second half in a vulnerable position. In tonight’s game, however, the Kings will have two things going in their favor that they traditionally would not in a back-to-back.

One is that Arizona is in the same boat, only they also traveled last night meaning two games in two cities. That eliminates the disadvantage the Kings would normally face here and perhaps lends them a bit of a leg up.

The second part is that the Kings played yesterday at 1 PM as opposed to 7 PM and that presents a much different situation, even more so than I expected after speaking with Olli Maatta and Todd McLellan.

Maatta – I think it helps, to get the afternoon game and get a good sleep, get to bed early the night after a game, I think it’s a benefit. Those back-to-backs [on the road], you play at 7, you travel to somewhere, you get to bed around 2 or 3 and fall asleep at 4, so it’s not the best day the next day.

McLellan – I think there’s a huge difference in the two. Even the [1 PM / 1 PM] back-to-back we had, you get home, you eat, you’re relaxed, you unwind and spend time with your family, you cleanse the game. If you haven’t played well, you get it out of your system and you don’t go to sleep with it. If you played well, you’re excited, you’re looking forward to the next game. At 11 o’clock at night, you’re trying to fall asleep, but you’re dwelling on the game if you didn’t play well and when you wake up in the morning you feel like crap, so you’ve got to re-adjust. I think it’s very beneficial to have that extra time.

Naturally, you expected there to be a better situation with the additional rest, but it was refreshing to hear exactly how much, especially when the typical answer in those situations is something along the line of “no excuses”. The Kings will certainly take it here when they can get it, and we’ll throw a nod to the LA Clippers and their 12:30 tipoff for the extra rest.

How it impacts tonight’s game versus Arizona, we will find out!

Copy/Pasting the theme from yesterday, though with new detail…..leave early! If you’re attending tonight’s Kings/Coyotes game, be mindful of afternoon basketball, the American Music Awards at Microsoft Theater and the LA Auto Show at the Convention Center. I slept over at STAPLES Center last night to avoid being late. Talk soon, Insiders!