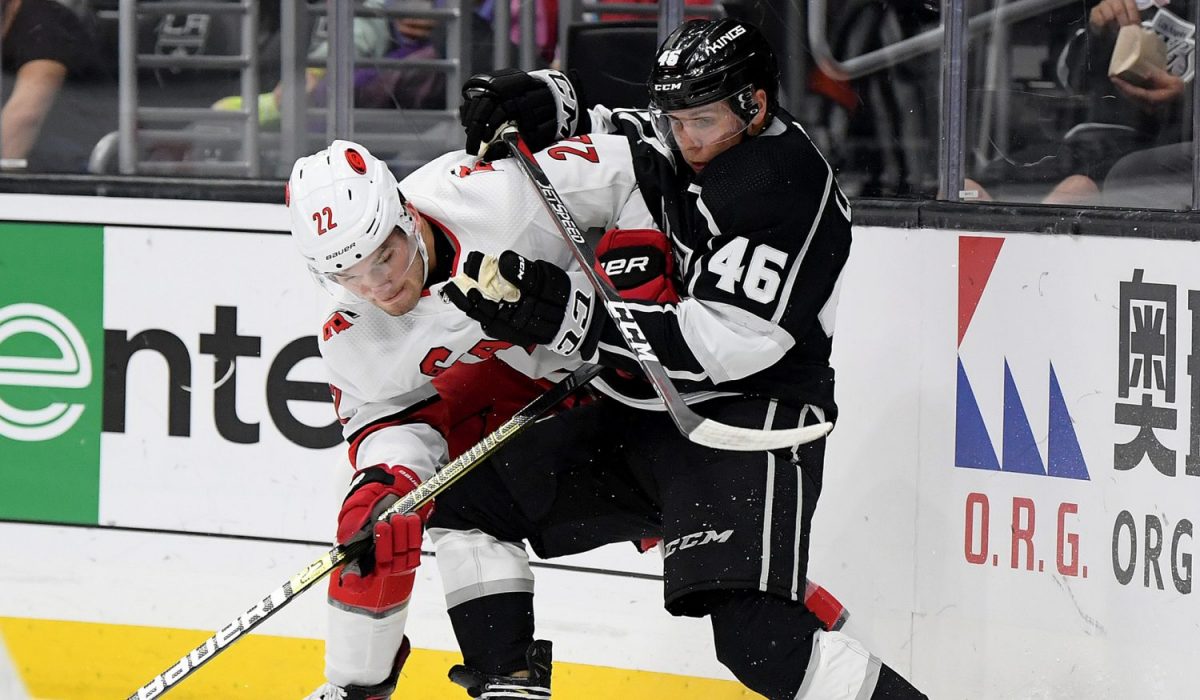 TONIGHT’S MATCHUP: The LA Kings return to game action this afternoon, as they host the Carolina Hurricanes for a matinee in Los Angeles.

HEAD-TO-HEAD: Low-scoring games have been the theme in recent meetings between the Kings and Hurricanes, with three of the last four meetings ending in 2-0 finals, one in favor of LA. The Kings have scored just three goals from their past four games against stingy Carolina, with Dustin Brown involved on two of them (1-1-2).

KINGS VITALS: The Kings play today for just the second time in seven days, after a jam-packed schedule that saw them play four times in six days on the road North of the border.

The team did not hold a morning skate today, considering the afternoon puck drop, so we won’t have specific details regarding tonight’s lineup until much closer to game time. With that being said, the Kings made a couple of adjustments to their lines after Wednesday’s loss to the Capitals and here’s how they lined up on Thursday for practice.

Lias Andersson and Carl Grundstrom are also options at the forward position this afternoon, with McLellan indicating that neither player deserves to not be playing at this juncture, but the Kings have a competition for roster spots, which is a good thing for the organization. On the backend, defenseman Sean Durzi was recalled from AHL-Ontario yesterday, though he is less likely to check in today versus Carolina. Durzi and defenseman Austin Strand swapped roster spots, with Strand returning to the Reign.

In goal….well your guess is as good as mine. The Kings play both today and tomorrow, meaning we will likely see both Jonathan Quick and Cal Petersen once this weekend. The rotation would point to Petersen getting the nod tonight, but Quick was stout on Wednesday against Washington, as he has been just about every time he’s played. Petersen has also been good, however, so consider this one a TBD for now.

If Quick is between the pipes, he is 6-4-0 all-time against Carolina, with a .918 save percentage and a 2.60 goals-against average. Petersen would be making his first career start versus Carolina if he gets the nod this afternoon.

HURRICANES VITALS: Carolina enters today’s action with three consecutive victories and wins in four of their last five. At 13-2-0 on the season, the Hurricanes own the NHL’s best winning percentage and are tied with Florida for the league’s best goal differential at +23.

Without a morning skate, we won’t know who starts in net until closer to game time. Usual starting goaltender Frederik Andersen is coming off of another strong performance in Anaheim on Thursday, with Antti Raanta now back from injury as the backup. If Andersen does indeed get the start, he brings an 8-1-3 lifetime record against the Kings into tonight’s play, with a .935 save percentage and a 2.01 goals-against average.

Via Walt Ruff of the Carolina team website, here’s how the Hurricanes aligned versus the Ducks –

The #Canes are on the ice for warmup at Honda Center. Their expected lineup this evening is the following:

Per Ruff, Brett Pesce was a game-time decision against Anaheim but did not play. Forwards Martin Necas and Nino Niederreiter recently returned from injury, as did Raanta.

Matching Up With The Best
Make no doubt about it, the Kings are facing a stern test here this afternoon in the league-leading Hurricanes.

Carolina has allowed just 28 goals from 15 games, by far the best defensive record in the NHL, averaging fewer than two goals allowed per contest. It’s not as if they’re playing every night winning 2-1 either, as they also rank third in the Eastern Conference in goals scored.

“Their transition is as good as anybody’s, they can turn on a dime and they go,” McLellan said of today’s opponent. “There’s the cliches, puck management, turnovers, they volume shoot so they get a lot of opportunities in succession – bang, bang, bang – and then they’re out. Special teams are very strong, confident and they give up nothing. That’s a big challenge for our group.”

Today’s action makes it two difficult tests in a row here for the Kings, coming off of Wednesday’s defeat against Washington. That doesn’t make it the same test, however. While there are some similarities that exist, it’s a different challenge tonight.

“They’re a little bit different than Washington, their numbers are very similar though,” McLellan said. “They’re stingy, they’re a volume-shooting team and they can get after you really fast. They’re a pace-driven team. I think that Washington is a little more methodical, in a way, but we have to check first. We’re not a wide-open, run and gun team, we’re going to have to check for opportunities and do more with them when we get them.”

Variety
Speaking of playing different teams……that’s a nice change of pace from last season, isn’t it?

With all due respect to the Freeway Faceoff – and make no mistake I am excited to see it on this homestand – when the Kings and Ducks played four straight games against each other at the end of last season, it got pretty tiring. Those games got stale by the third game, old by the fourth game and I’m not sure where we would’ve been if the schedule hadn’t changed and we saw the five straight matchups we were originally supposed to.

McLellan used that as a reference point when discussing a variety of opponents. In that instance, he noted that there’s only so much you can give the players in terms of pre-game preparation.

“We played Anaheim four times in a row last year, what else can we give them?” McLellan said. “Play better than they do, there’s not a lot of surprises. At that point, they’re tuning you off and as the teachers, we have to recognize that, how much to give them and how little to give them at certain times.”

This season, however, we have variety. Teams like Carolina and Washington were not at all on the radar last season, because there were no games between conferences. The Kings are back to a normal schedule, playing their usual 82 games against 31 opponents. That variety, McLellan said, has been an exciting re-introduction for the Kings.

Overall, McLellan feels that the return to a normal schedule helps the Kings. New teams, new challenges, all good things.

“I think variety helps this team,” McLellan added. “There’s different challenges every night. If you’re Toby and Mikey, and you prepared for Ovie the other night, well now it’s a little bit different with Aho, he plays completely different, or whoever it might be with Carolina, then the next night it’s a different type of team. The challenges change on a nightly basis.”

If you’re coming to today’s game, leave early…..USC-UCLA at the Coliseum also has a 1 PM kickoff. Kings and Hurricanes, coming up next, Insiders!