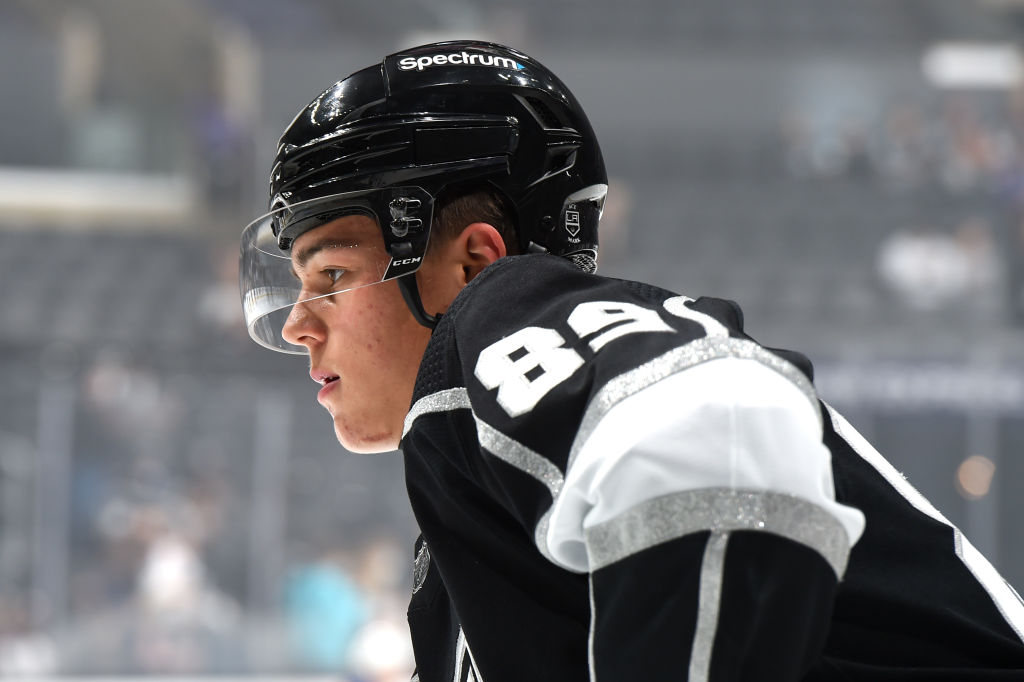 What do you like better – A silky-smooth breakaway move, patented after perennial Hart Trophy candidate Aleksander Barkov, or a shot from the top of the circle that was so pinpoint it was only in the net for a split second after finding the back bar?

For Rasmus Kupari, over the past four days, you didn’t have to choose.

On Thursday against Winnipeg, Kupari took a stretch pass from Arthur Kaliyev, used his speed to create a breakaway down the left wing and finished with a nifty little deke for the goal. Kupari moved from left to right, got the goaltender to slide with him and chipped the puck back against the grain for the goal on the blocker side.

It was a move he said he had used last season with the Ontario Reign – both goals are shown below – and tried earlier that day at morning skate, but he had obviously never used it before in an NHL game. The one that really matters though was the one on the biggest stage.

“I actually tried that move in morning skate today, it was on my mind,” he said. “I had good speed, I’ve seen Barkov do that move a few times and it worked this time……I tried to fake a little bit and chip it back over the elbow. I actually did the same move last year with the Reign. It was just on my mind and I wanted to try that.

Two days later, Kupari seemed eager to out-do himself. Early in the third period, with the Kings on the power play, Kupari took a feed from Matt Roy in the right-hand circle and fired a well-placed shot, through a Dustin Brown screen, that rang directly off the bar in the back corner of the net and fired out like a rocket on the other side. If you blinked, you might’ve missed it go in.

Kupari described the play as “the shot of my life” and was happy to see it go in, exactly in the spot he had picked.

“I had it in my mind that I wanted to go short side and [it was a] great screen by Brownie,” he said. “It made it even harder for the goalie to see the shot. I’m happy for the shot.”

We’ve spent 400 words here talking about two individual plays and those are both great. We’re here to score goals and Kupari delivering a pair of them has been a great thing for the Kings.

It’s important though, as it relates to Kupari, to not get caught up in just the highlight-reel plays and to look at the development he’s taken throughout his game. As he continues to grow and evolve into an NHL contributor, it will be about the things he’s doing all over the ice that will continue to earn the trust of the coaching staff and eventually translate into a full-time role.

It would be easy to forget that Kupari did not make the opening night roster, as one of the final players assigned to the AHL out of training camp. Though he was with the Reign for a brief time, Kupari never skated in a game with the club, as he was recalled prior to the second game of the Kings season, with Lias Andersson placed on injured reserve that same day.

Since that time, he’s featured in a number of different roles, including both at center and on the right wing. Initially, Todd McLellan said that the plan for Kupari this season was to begin him in the AHL, playing on the wing, and play him big minutes to get more comfortable at that position.

Plans change, however, and he has found himself smack dab in the middle of the NHL roster picture, playing a key role in multiple situations.

“I would say something that surprised me is he’s been more physical than I thought he usually would be,” linemante Trevor Moore said. “He hounds pucks, he’s a guy that can do a lot of different things, he’s not one-dimensional. He’s a guy that I definitely like playing with.”

Kupari himself said that he tries to play with some physicality because it helps him to establish his comfort level. When he’s not playing physically, he said that sometimes he feels off and that it helps him to settle in. From there, it’s been about taking his tools and his gifts and turning them into more. That’s where confidence comes into play.

When asked about his teammate the other day, Dustin Brown focused on that one word, confidence, before pausing and expanding.

“Confidence,” he said. “It’s a funny thing, confidence, when a young player can get it. He obviously has very good skill and very good speed. I thought [on Thursday] he was one of our better players and hopefully that can continue to build internally for him because that’s important for a young player.”

Last season, when he came up, it wasn’t necessarily that Kupari was not confident, though he certainly trended towards making sure that the noticeable areas of his game were in order. As a young player, there is always the thought in the back of your mind to make sure you’re not hurting the team at the wrong end of the ice.

We certainly saw flashes from Kupari in his limited sample size last season. He’s a terrific skater, and he showed it, but there was certainly more to give. As he adjusted to the NHL style of play, he kept things simple during his first tour at this level.

“I just wanted to be good in the d-zone last year, stay structured with the system we were playing,” he said. “Now, in my second year playing games with the Kings, I’m more comfortable with the system and I can be more open-minded and try to use my strengths a little bit more.”

With that comfortability has come confidence, and that confidence has been noticed by the coaching staff as well as by his teammates.

“He’s more confident,” McLellan said, of Kupari. “Ras looks excited when he’s playing, he can’t wait for his next shift. He comes off, he looks back at Marco [Sturm] or whoever and he wants feedback. It’s nice to see that excitement, that energy he brings to the group.”

As Kupari’s confidence has grown, so has his production and so has his role with the team. In his season debut, he played just over 10 minutes, all at even strength. Fast forward to yesterday’s win over Buffalo, and Kupari logged more than four minutes on the power play. He has mixed in occasionally on the penalty kill as well during the early stages of the season, with McLellan commenting that he believes Kupari will become an effective PK guy in time.

As he’s continued to grow and mature as a player, he’s gained the confidence of the coaching staff, which has led to elevated minutes in elevated roles.

“He’s learning as he goes, but his speed and his tenacity have helped the group,” McLellan said. “We’ve played him as a penalty killer, played him on the power play, he’s earning our confidence as well. It’s a good tradeoff right now, he’s become a pretty darn good player for us, and quickly.”

With 15 career games of NHL experience, Kupari can’t be considered to be a mainstay just yet. He still has areas of improvement and things he will continue to work on.

With several players currently out of the Kings lineup, however, others will be continually called upon to step in and step up. Kupari is one who has already done so, and with opportunity still in front of him, it’s been good signs early for the young forward.