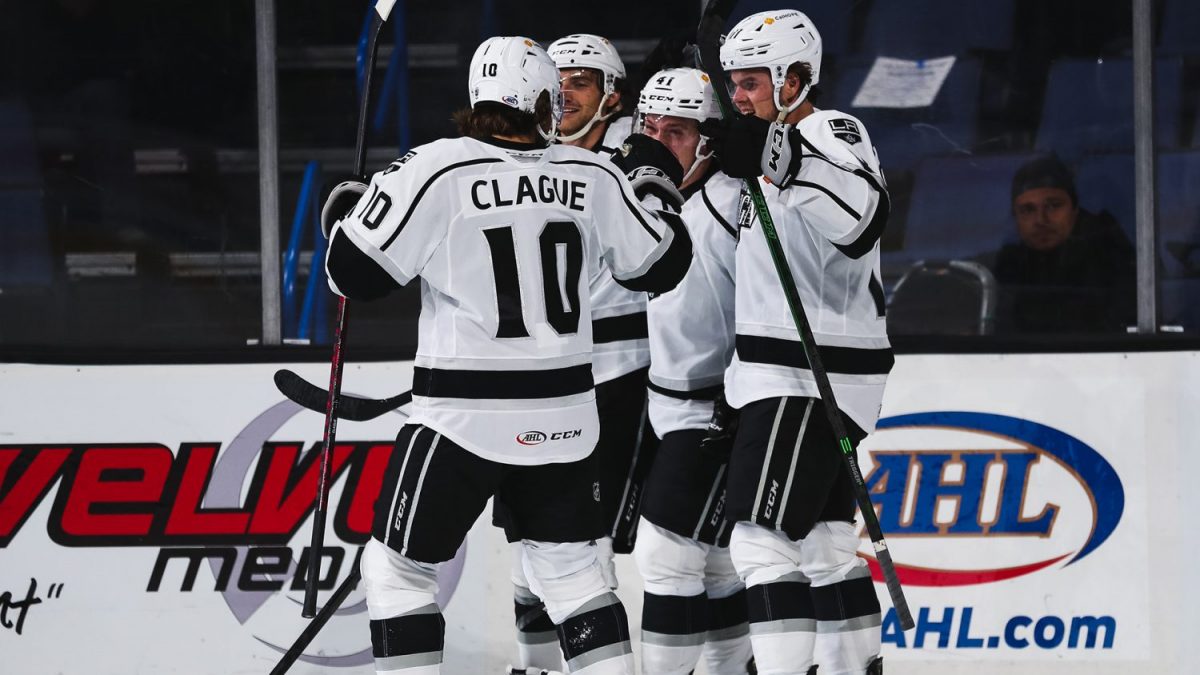 The Ontario Reign have gotten off to the start they were looking for. Tasked with a 2021-22 schedule that began with five home games in just eight days, the team came within a sliver of perfection, earning nine out of 10 points to open the year, all against Pacific Division opponents.

Leading into the opening weekend, Head Coach John Wroblewski knew his group was staring at an important opportunity. Just eight months ago at the start of his tenure behind the Reign bench, he saw things go the other way for the club, dropping the first five games on their way to a 1-10-2 start.

“If we hit the ground running and we’re playing great for eight days, then it’s awesome and we get to pot a bunch of points,” Wroblewski said two days before the opener. “But if we’re not, then there’s not a ton of opportunity to work on anything so in 10 days we’ll see how we like it.”

Well, the points have been banked and the Reign are now sitting at the top of the division and second-best in the AHL with a .900 points percentage. It’s safe to say things worked out.

“4-0-1, you sign up for that all day,” Wroblewski said after Saturday night’s 5-1 victory over San Diego to end the homestand.

The start is Ontario’s best since 2015-16 when the club won its first five games and picked up points in seven straight during the first month of their AHL existence.

“It’s a really good feeling,” said goaltender Matt Villalta. “Any time you can start off a year winning a few games, getting some confidence under our belt, it’s a great thing. I think we’re rolling here. Everyone’s been doing their job, working hard, and I think the most important thing is that we’re all having fun.”

A large part of the Reign roster has been with the Kings organization for multiple years. In total, 19 players that have cracked the lineup so far this season were returners.

After scoring a late goal that sent last Tuesday’s game against Abbotsford into overtime, forward Tyler Madden remarked that things have come easier to him this season because of the existing chemistry he already had with his teammates.

Villalta echoed that sentiment, saying that he’s had a blast coming to the rink, whether it’s been in El Segundo for practice or Ontario on game days.

“We all get along, we’re a very close family here,” Villalta said. “It’s a pleasure being able to work with everyone.”

While being satisfied with the start, Wroblewski and others, like Alex Turcotte, have mentioned they don’t even think they’ve come close to playing their best hockey. The belief is there that the group can get to a higher level as the season progresses.

As the team prepares for their first road action with two games in Abbotsford this weekend, here’s some of what has stood out through five games for Ontario:

While not always controlling the game early on, the Reign haven’t been behind much, especially in the early part of games. In fact, Ontario has only allowed a single goal in the first period this season, and that came to Bakersfield during a 5-on-3 power play for the Condors.

Not once have the Reign gone into the locker room trailing after 20 minutes. That’s always going to be a good recipe for success.

Getting out to leads has helped everyone settle in, including Helge Grans and Jordan Spence, rookie defenders that are just beginning their North American professional careers. Both have been eased into the rotation, but each has areas of their game to be proud of early on. Grans has earned three assists and a +3 rating in just two appearances, while Spence has seen action in all situations and got his first pro point with a power play assist on opening night.

In more than 300 minutes of action, Ontario has only found itself trailing for a total combined time of 14 minutes and 18 seconds. All four times they’ve been behind, the Reign have quickly found an equalizer. The longest they’ve been down was for 5:41 after the aforementioned 5-on-3 goal by Bakersfield in the first period before Brayden Burke evened things up with a power play goal of his own.

Speaking of Burke, he’s been a key factor that was an unknown for Reign fans coming into the season. The former AHL All-Star who finished the shortened 2019-20 season with 52 points is tied for the team lead with three goals. After starting on the fourth line on Opening Night, Burke has been elevated to the top trio alongside TJ Tynan and Martin Frk.

I’m not sure how it’s taken this long to mention those other two, as one could argue they’ve been the most impressive of anyone to begin the year. Tynan, who leads the team in scoring with six assists, has been on the scoresheet in all but one game. He consistently drives play and is always making his linemates better, no matter who he is skating with.

“There’s not a ton of instruction that goes along with him,” Wroblewski said when speaking about his relationship with the reigning AHL’s Most Valuable Player. “He’s earned the right to coach on the fly a little bit and lead on the fly. I can’t say enough about his effort thus far. After being around him for training camp and a few games so far, it’s been awesome having him.”

Frk, who missed most of last year’s campaign due to injury, looks healthy and came out firing, scoring the team’s first two goals of the season on Opening Night. Two of his three goals have been on the power play, he’s earned a +4 rating, and his 19 shots rank seventh-most in the AHL.

Overall, the scoring balance the team has found is hard to overstate. A staggering 15 players have posted at least two points already. Maybe even more impressive, only three skaters have seen action and haven’t registered a point. Even goaltender Jacob Ingham, who was recently reassigned to Greenville in the ECHL, was credited with an assist in his lone appearance.

“You like the process because I think we’ve had a lot of guys show up whether it was Alex Turcotte’s three assists [on Friday], or Tynan just racking up assist after assist and Brayden Burke, what a nice surprise he’s been here being able to pick up some offense for us,” Wroblewski said. “You can go up and down the lineup and point out guys that have played well. It’s a different star every night and a different momentum cast every night so I’m very happy with it.”

While their first period starts have been notable, the way the Reign have finished off games has been equally as impressive. Not once in their first five outings did the team falter with a lead at the start of the third frame.

That may not be sustainable as the sample size grows, but it’s a great trend to see and it speaks to the confidence the group has shown. With a 3-1 advantage heading into the third on Opening Night, Ontario didn’t allow anything to San Diego until the final minutes of the contest, after Aidan Dudas had added an empty-net strike and Samuel Fagemo tacked on power play marker to add insult to injury. Things were closer on Friday against Bakersfield, with the Reign holding a 2-1 lead at the start of the third. During a 4-on-4 situation, Austin Strand, who was recalled by the Kings the following day, added breathing room with an insurance goal.

Most recently on Saturday, San Diego’s Vinni Lettieri scored just nine seconds into the third which could have swung momentum in the Gulls’ direction. But Villalta stepped up to shut the door, stopping 15 third period shots to finish the game.

Wroblewski was satisfied with the way his team closed things out Saturday night to finish the homestand.

“I thought that almost uniformly we had guys with their energy stores in the right spots both mentally and physically. They were sharp.”

Always the great equalizer, good goaltending should never go overlooked. Villalta has carried the mail in the crease and so far, he’s looked like someone the club can depend on. With an unblemished 3-0-0 record, the third-year pro has a goals-against average of 1.98 and a stout save percentage at 0.931.

“You just look at him playing the puck, that shows his confidence level,” Wroblewski said after Villalta stopped 33 shots in Saturday’s win. “Where he’s at with his comfort level in the net, I use the phrase earned confidence. I think that going back to last year his practice habits and the way that he’s studied the game and put in the proper amount of smart, hard work, staying with his process, has been admirable. I hope it continues not only for our team but for him because he’s such a good guy.”

The Kingston, Ont. native who spends a lot of his downtime with a fishing pole in his hand said he’s trying not to overcomplicate his role.

“I’m just out there playing hockey,” Villalta said. “I’m not thinking too much and just having fun. If you can enjoy the game, most times I think you’re going to be successful. That’s all I’m trying to do right now is just enjoy it, have fun every day, put the work in and keep winning games.”

Veteran Garret Sparks was injured during his only AHL preseason appearance against San Diego on Oct. 11 but made his Reign debut on Friday. Despite Ontario allowing a season-high 37 shots to Bakersfield, Sparks was sharp and secured his 94th career AHL win.

“He’s calm back there,” Wroblewski said while describing Sparks after the victory. “He uses that frame and I think that he’ll get better and better with the more comfortable he is in the net. I think you could say that for anybody, but for him being a positional style goaltender, I think that reps are going to be key get him into the net as timely as possible.”

The reliable play in the crease hasn’t gone unnoticed by the rest of the roster either.

“It brings a lot of confidence to our team,” Turcotte said. “They’re all really good goalies and a lot of fun to be around. To know that we have guys like that who can stand on their head for us is huge and sometimes we’re going to need that.

Ontario Reign captain TJ Tynan has had quite the month. When 2023 began, the first line center was leading the