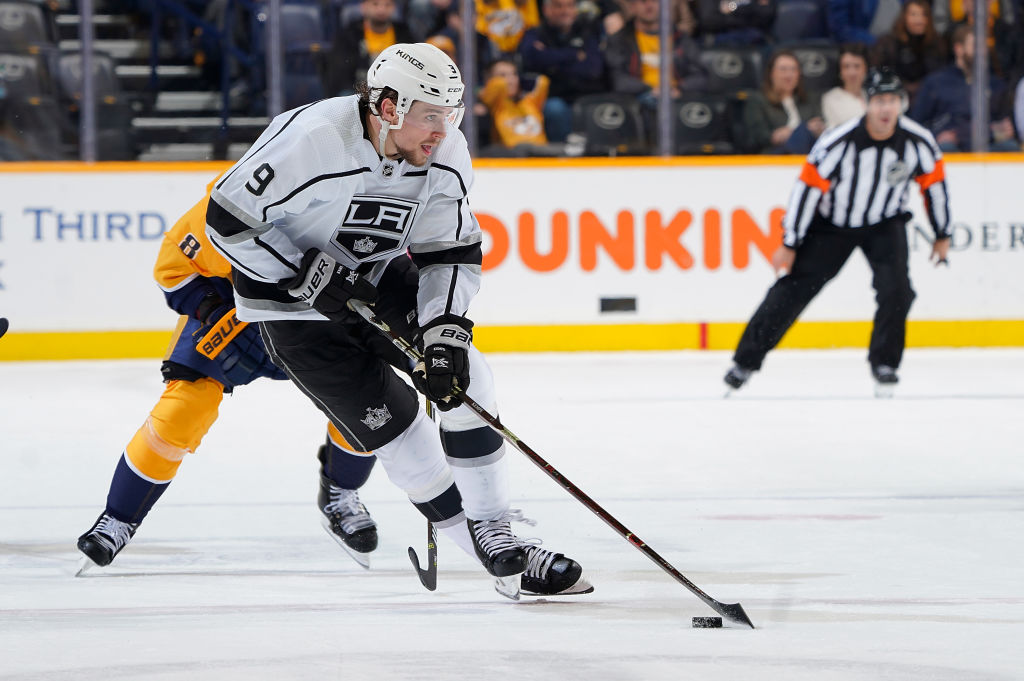 TONIGHT’S MATCHUP: The Kings hit the road for the first time this season, as they begin a four-game trip this evening in Nashville.

HEAD-TO-HEAD: Tonight’s contest marks the first for the Kings in Nashville since February 21, 2019. The Kings, who haven’t won in Tennessee since 2016, were slated to visit in March 2020, before the season was shut down due to COVID-19. Amongst active NHL defensemen, none have more goals against Nashville than Alex Edler, who has 10 tallies and 26 points in his career versus the Predators. For the veteran, it’s his fourth-highest point total, and his second-best points-per-game (0.67), against any one opponent.

KINGS VITALS: Goaltender Cal Petersen was first off this morning for the Kings, making him tonight’s probable starter between the pipes, on his 27th birthday……HBD, Cal!

Petersen has made just one start against Nashville to date, back in 2018-19, the second start of his professional career. On that night, the Iowa native turned aside 38 of the 42 shots he faced, good for a .905 save percentage, in a 5-3 Predators victory. Tonight’s game is slated to be Petersen’s second start of the season after he and Jonathan Quick split the back-to-back set at home to kick off the 2021-22 campaign.

In terms of skaters, the look that we saw on Sunday during practice was also what we saw during line rushes this morning. Todd McLellan hinted at changes coming to the third line, which he confirmed this morning to be in the form of Trevor Moore, who brings elements of speed, tenacity and energy to whichever line he skates with. Forward Arthur Kaliyev looked like the odd man out based on this morning’s skate, though unconfirmed. In that case, forward Carl Grundstrom would be in line to make his season debut, skating as a part of a trio with Blake Lizotte and Rasmus Kupari.

Here’s how the rushes set up this morning –

PREDATORS VITALS: Nashville has been out of game action since last Thursday, when they dropped their second of the season from two games played. The Predators enter tonight’s action well =0rested, and without travel, as they face off against the Kings for the first time in a long time.

In terms of a goaltender, assuming the starter, Jusse Saros, is in net, he would be in line to make his third start of the 2021-22 season, and his third career start versus the Kings. All-time, Saros is 1-1-0 with a .882 save percentage and a 4.24 goals against average against Los Angeles.

Below is how Nashville lined up last time out versus Carolina –

Per Brooks Bratten of the Predators team website, expect to see forward Tommy Novak check in for Cody Glass, who was assigned to the AHL’s Milwaukee Admirals between games. Novak, a 2015 Nashville draft pick, will make his NHL debut tonight.

#Preds Head Coach John Hynes on Tommy Novak, who is set to make his NHL debut: "He's physically and mentally ready to step in and play, so we're excited to give him a chance tonight."

NashVik
One of the most-discussed storylines heading into tonight is the return of forward Viktor Arvidsson, who had spent his entire NHL career to date with Nashville, prior to the offseason trade that brought him to the Kings.

Arvidsson had obvious success in Nashville, with two, 30-goal seasons, and was a part of the 2017 team that finished two wins shy of a championship. As an NHL player, Nashville was all he had ever known, making tonight’s reunion likely to be a memorable one.

While the Predators have always been well-supported here in Nashville, things seemed to pick up around the time Arvidsson arrived, as he recollected.

His first season with the organization was also then Head Coach Peter Laviolette’s first season and Arvidsson recalled the buzz around the team starting to grow in his early years. That led into the Stanley Cup appearance in his first full NHL season, one of his two thirty-goal campaigns.

“When I got there, [the city] was completely new [to me],” he said. “It was a new coach, Peter Laviolette, we had just traded for James Neal, the hype was pretty obvious when I got there. We started playing well, the hype around the team got even bigger.”

Now returning, for his first season not with the organization, Arvidsson will see friends who were formerly teammates, wearing another jersey for the first time.

He recalled his battles during practice with defenseman Mattias Ekholm, who recently signed an extension to remain with the Predators. Both Swedish, Arvidsson called his countryman a “good friend” and noted, with a smile, his excitement to battle up against his former teammate. He said he keeps in touch with some of his former teammates, talking every few days to some, after being together for six seasons.

Entering tonight, Arvidsson gave us a preview of what to expect in Nashville, talking about the liveliness of Bridgestone Arena. It’s a notoriously good atmosphere here, and the Kings will need to be prepared for it.

“It’s an energy building,” he said. “The rink is right on Broadway, so they’re pretty amped up when they get in there. They feed on that, especially early in games, and they get momentum from them. We’ve got to be ready for that. Don’t panic, when they score a goal, for sure.”

As one of the men used to providing that energy, Arvidsson will now aim to diminish it with a goal, and a win, here tonight.

A Mix, For The Bottom Six
The Kings have decided to shuffle the personnel around a bit in the bottom six, bumping up Trevor Moore to play on the third line alongside Gabe Vilardi and Vladimir Tkachev. The fourth line, from rushes this morning, had Carl Grundstrom in the mix, skating with Blake Lizotte and Rasmus Kupari, with Arthur Kaliyev looking like the odd-man out.

The third line has been a point of conversation for the Kings following the first two games, with a line looked at to provide some offensive production not doing so at even strength against Vegas and Minnesota. With that in mind, McLellan felt it was time to shake things up a bit.

“The line, the way it was constructed is that you’ve got two, inexperienced players with Arty and Tkach[ev] there,” he said. “Arty is a shooter, Tkach is a playmaker, but it just wasn’t working. They weren’t shooting the puck and Gabe wasn’t either.”

Moore has shown throughout his career that he’s able to bring energy and aggressive play, regardless of who he’s playing with. He was moved around the lineup last season, anywhere from the first line down to the fourth line, and provided something in every situation. In McLellan’s words, he offers something different alongside Vilardi and Tkachev.

“Mooresy is going to add a different ingredient,” McLellan explained. “There’s going to be some tenacity, a puck hunter, a forechecker, somebody that’s going to hunt and retrieve, get to the net.”

The key to the line working, though, is more than just changing the personnel.

Adding Moore is one thing, but McLellan wants to see more of a shooting mentality from Vilardi and Tkachev, two players who are playmakers by nature, but have quality shots and goalscoring abilities. We saw that from Tkachev during points of the preseason, and we really saw it from Vilardi towards the end of last season, and into the exhibition games last month.

Now, McLellan wants to see those traits put into practice.

“[Moore]’s only going to be able to do his job if the other two decide they want to shoot the puck a little bit,” he said. “They know they have to do that a little bit more. When one has the puck, the other one has to get open for a shooting opportunity, and vice versa. That’s what we’ll be looking from them offensively, and defensively, they didn’t get scored on the other night, which was a good sign, the rest of the lines gave up one. It’s not that they’re getting hurt at that end, it’s just that we expect more from them, momentum wise, offensively.”

Air Jordan
Lastly, hear from Stanley Cup Champion, and the newly hired, Jordan Nolan on returning to the Kings organization in a front-office capacity. Nolan was a part of the Bally Sports West broadcast team on Saturday, and will be involved in community events for the organization.

Kings and Preds, a few hours from now!