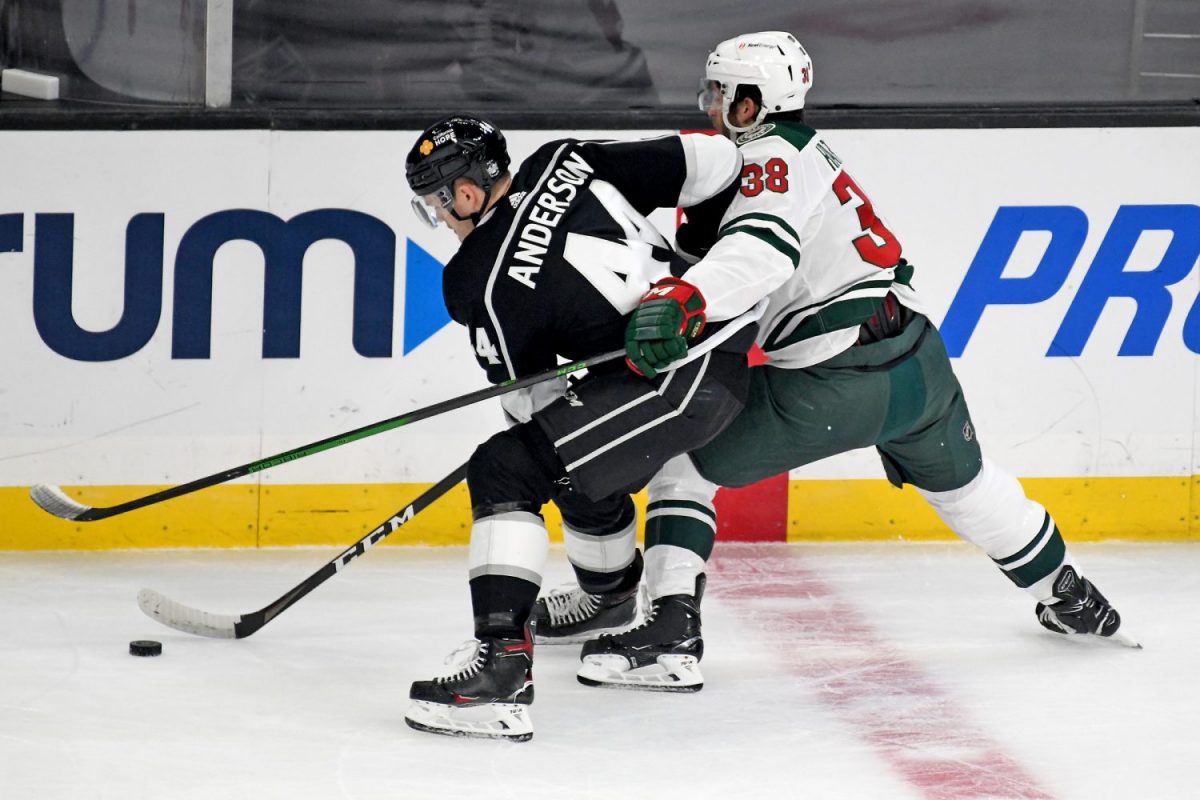 TONIGHT’S MATCHUP: The Kings conclude a short, two-game homestand to begin the season with tonight’s game against the Minnesota Wild.

HEAD-TO-HEAD: The Kings will square off against another familiar foe this evening in Minnesota, after the teams played eight times a season ago. LA earned points from five of the eight meetings, but won just two games, in the head-to-head series last season. Anze Kopitar was a point-per-game player against Minnesota with eight points (1-7-8) from eight games, while defenseman Drew Doughty and forward Dustin Brown led the way with three goals apiece.

KINGS VITALS: First things first, expect a change between the pipes this evening, with Jonathan Quick tonight’s expected starter against the Wild. Quick was first off this morning, and Todd McLellan confirmed that he will get the nod for the Kings.

The Kings announced several roster moves this morning, found in full here, including forward Rasmus Kupari being recalled to the Kings, forward Lias Andersson added to injured reserve and forward Brendan Lemieux placed on the non-roster/COVID-19 List. Andersson suffered a groin injury during the Kings preseason game against Anaheim and hasn’t played since, with Kupari now joining the roster after he was one of the final players sent to AHL-Ontario last week.

In terms of alignment, McLellan confirmed that Kupari will be in the lineup this evening. Below is how the team took line rushes this morning, which has the same personnel as Thursday evening, minus Kupari in for Lemieux.

Not with the group today was defenseman Christian Wolanin, who was claimed off of waivers this morning by the Buffalo Sabres. Wolanin was a part of the opening-night roster against Vegas, but did not feature in the game. His spot on the active roster will be taken by Olli Maatta, who was activated off of injured reserve earlier today.

WILD VITALS: The Wild played last night against Anaheim and complete their back-to-back set this evening at STAPLES Center. Considering the back-to-back, and the post-game (albeit light) travel, Minnesota is not expected to hold a formal morning skate today.

With that in mind, could we see Kaapo Kahkonen in net tonight, with Cam Talbot getting the nod yesterday against Anaheim? Kahkonen was 2-2-0 with a 2.75 GAA and a .902 SV% in four starts against the Kings last season, with both LA victories coming against Kahkonen. The Finnish netminder’s totals against the Kings aligned closely to his overall numbers last season, with an identical save percentage to his full-season total.

Per the wonderful data provided to us by Natural Stat Trick, here is how Minnesota lined up yesterday in Anaheim –

KupaRight
Recalled just before this morning’s practice, forward Rasmus Kupari will feature tonight for the Kings, in place of Brendan Lemieux.

When Kupari was sent down to the AHL, it wasn’t necessarily due to anything in his own play. Whereas there was perhaps a fit off the bat for Arthur Kaliyev, the desired plan of attack with Kupari was to have him play an expanded role in the AHL with Ontario to start the season, with the likelihood that he would feature with the Kings as well.

“It’s not like he’s been away from us for a long time, he was with us in camp, played in exhibition games, I think he’s picked up where he left off,” McLellan said this morning. “I think he’s an NHL player right now and there’s only so many spots on the roster, so we wanted him to play a lot in the American League. With [players out], he’s back up and he’s just got to play his game. He’s a good skater, he has a tenacity in him all over the rink, he can hunt pucks down, we expect him to become a real good penalty killer and he can provide offense as well. He’s got a lot of tools that he provides the group.”

Kupari is currently in the middle of a transition from center to the wing, where he will likely feature this evening, on the right of Blake Lizotte and Trevor Moore. That’s not to say he still doesn’t have the ability to play center in his arsenal, but with two established pivots in the Top 6, and several others vying for ice time on the third and fourth lines, plus the talent in Ontario, there could be more opportunity for a player such as Kupari to excel on the right than down the middle.

Kupari detailed a couple of the differences between the two positions, while indicating he is comfortable in the new role.

“It’s a little bit different than center, which is a little slower, down low, maybe get more of the puck through the middle,” he said. “[On the wing], I would say maybe a bit more chances, trying to use my speed and push the pace.”

He also noted that playing center features added defensive zone responsibilities down low, meaning that he is perhaps a bit more free to use his wheels playing on the outside, but might have less opportunity to have the puck on his stick playing through the center of the ice.

From McLellan’s perspective, he admitted that the sample size is still obviously quite small, though he talked about Kupari’s intelligence as a player, and his skating ability, as two factors that will aid him in being successful regardless of his position.

“It’s still really early, he’s only three games in really, to this transformation to the right side, so we’ve got to give him some time to get an honest evaluation. I do think though that it’s easier to go from the middle to the wing, than from winger to middle. He’ll be fine. He’s a smart player, he’s got good legs to get him to the battles and get him out of the trouble.”

Haven’t We Seen You Before?
One of the major talking points heading into this season was the fact that NHL teams are back on a more routine travel schedule, as opposed to last season’s division-only format.

So, naturally, the Kings start off the season facing off against two of the seven teams they played against last year. Because of course, right? When asked, McLellan indicated that one, both teams made the playoffs last year and provide a strong test, and two he agreed that the familiarity provides a good, early-season measuring stick for his group, with familiar opponents providing a sense of what to expect heading in.

“I think that’s fair to say,” he said. “They were obviously both playoff teams, they had great seasons, they are expected to have real good years [this year] and be back in the playoffs. I think it’s a good test for us right off the bat. It also gives us an idea, playing familiar opponents, someone you played that many times, allows you to plan for the game and at least have an idea of what to expect.”

With Vegas now in the rear-view mirror, the focus is all on the second half of the tandem and that’s Minnesota.

As noted yesterday, the Kings won just two of eight head-to-head matchups last season, but several of those games came in unique circumstances. The first two games of the season were the first games for LA in 10 months, one loss in Minnesota was the game where the team lost two defenseman and two other games were impacted by COVID protocols, one each way.

Regardless though, Minnesota was a dangerous team last season, with the addition of Kirill Kaprizov making a big impact, not to mention the growth and progression of other internal players. Kaprizov had six goals from eight games versus the Kings last season, and is naturally a point of emphasis tonight.

“I think everybody is aware of him now, but that doesn’t make the job any easier…everyone has been aware of Connor McDavid, but that doesn’t make the job any easier,” McLellan said. He has a very slippery skillset, he handles pucks really well in traffic, he slides off checks, he has the ability to go 10 and 2 with his feet, he wraps and jams in and around the net. Then, he’s also very effective in the long game, making plays, so he’s a full, 200-foot player and there’s a reason he was the Calder Trophy winner. By committee, whoever is on the ice, you’ve got to know where he is, but they have some other very good players too you have to pay attention to.”

Game Thread to follow tonight from STAPLES Center, before the Kings and Wild square off for some Saturday Night Hockey!