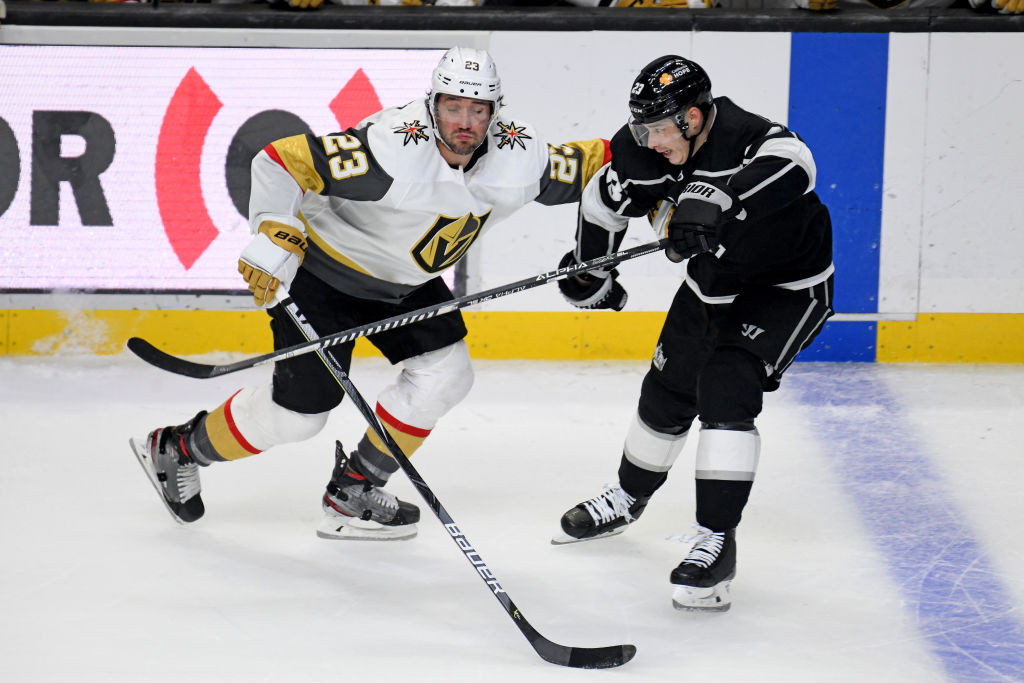 HEAD-TO-HEAD: The Kings and Golden Knights split a pair of games during the preseason, with the Kings winning 3-1 in Salt Lake City, and Vegas winning 4-0 on home ice. Last season, the Kings won just two of eight games against the Golden Knights, with forward Anze Kopitar leading all scorers with seven points (2-5-7) from eight games played. In NHL history, no player has collected more points against Vegas than Kopitar’s 21 (8-13-21), with forward Alex Iafallo’s 15 points (4-11-15) ranking tied for second.

This morning, the answer for this evening is Cal Petersen, confirmed to us by McLellan in his morning skate media availability.

Petersen has made six starts and eight total appearances against Vegas in his NHL career to date, and brings with him a 4-2-0 record, a .931 save percentage and a 2.58 goals against average. Throughout his NHL career, Petersen has faced Vegas more frequently than any other opponent, and his save percentage versus the Golden Knights is his second best against any team he’s made at least three appearances against.

In terms of the skaters, nothing from this morning made it seem like we wouldn’t see the alignment we’ve seen over the last few days. Lias Andersson’s status was the lingering question earlier in the week, but yesterday, McLellan ruled the forward out for this evening with a groin injury. As such, here is the expected configuration for the Kings tonight.

From a team standpoint, Dustin Brown is excited about the alignment of that group, entering tonight’s action.

“I like our team,” Brown said. “This is the best team that we’ve had here in some years on paper and now it’s up to the guys and the coaches in the room to figure out how to make it work in the real world.”

This lineup leaves defenseman Christian Wolanin and forward Carl Grundstrom out of this evening’s game as healthy scratches, while defenseman Olli Maatta remains on injured reserve, as he works his way back from an injury.

GOLDEN KNIGHTS VITALS: The Golden Knights enter tonight’s action with one game under their belt, a 4-3 victory over Seattle on Tuesday evening in Nevada. Forwards Max Pacioretty (2-1-3) and Mark Stone (0-3-3) led the way with three points apiece in the victory, while forward Chandler Stephensen had a goal and an assist.

“I really believe that they’re a good pace team, a good rush team. Whether it’s on the forecheck, or whether it’s on the rush with the fourth man joining, coming at you with pace, they look to go long and stretch the game out. A lot of times, the mistakes that teams make playing against Vegas don’t even happen in your end, it can happen up the ice, in recovery and in taking away important players later in the rush.”

Per David Schoen of the Las Vegas Daily Journal, here is a potential lineup tonight for the Golden Knights –

Starting Fast
Todd McLellan has preached fast starts at times throughout the preseason, both in the context of individual games and the season as a whole. Tonight’s game will obviously be no exception, with the fast-starting Vegas Golden Knights on the other end of the ice. Last season, Vegas was tied for fourth in most goals scored during the first period, while the Kings were third from the bottom in goals conceded in the opening twenty minutes.

No team scored first, or had more wins when scoring first, than Vegas did a season ago. The only team to do so fewer, in both categories, than the Kings was the Buffalo Sabres. At this point of the season, all we have is last season’s data, which doesn’t count for much. But in any event, starting fast will be important for the Kings, both tonight and moving forward.

Speaking with forward Dustin Brown this morning, he put the key to starting fast and playing fast as passing the puck effectively. He put it simply – when the Kings pass well, they play well and when they don’t……they don’t play well.

“With this group, when we pass well, we play well and when we pass terrible, we play terrible,” he put, bluntly. “It sounds like a small, little thing, but when we’re passing the puck really well, we’re able to go up and down the ice, do what we want, be in the zones we want, more often. I think that’s a small, little detail that makes a huge difference for this group.”

The small details are the ones that usually make the larger ones relevant.

When you look at the broader buzzwords of playing the systems that the Kings want to play, it all starts with the small details. Moving the puck crisply and effectively is a key factor for the Kings, in several different areas, and each pass sets up the next part of the system. But it starts with the passing element.

In terms of how the Kings have prepared to do so, it’s started this week in practice. McLellan and his staff have preached pace and tempo throughout the week and feel that the group is prepared to do exactly that tonight.

Speaking with the bench boss this morning, he agreed with Brown that it all starts for the Kings with moving the puck. It’s passing the puck and receiving the puck, and doing so with pace and tempo. As the old saying goes, the puck moves faster than the man, and there enlies the different between being fast and playing fast. The latter only helps with the former, as McLellan touched on this morning.”

“Absolutely, one-hundred percent,” he said. “You talk about speed, playing fast, physically you can only skate so fast and that dramatically slows down when the passing is off and you’re throwing it into skates, having to adjust your tempo to line up to receive or deliver a pass. Every team that can be said for, but just for ours, we need to connect the dots, we need to do it often and we need to do it well.”

Do The Damn Debut
Tonight appears likely to mark an NHL debut for forward Vladimir Tkachev and Kings debuts for the trio of Viktor Arvidsson, Phillip Danault and Alex Edler.

For Tkachev, tonight will be a lot about playing his game, and focusing on the things that he does well. The stage has grown from preseason to the real deal, but Tkachev appears set to be put in a position to play to his strengths, skating on a unit with the playmaking Gabe Vilardi and the sharpshooting Arthur Kaliyev.

Looking at the body of work possessed by the latter three, there’s unlikely to be any sort of nerves necessarily about doing it with a new team. All three have played in Stanley Cup Finals, all three have been on the biggest stage, all three know what it takes here.

Speaking with Edler, there is still some obvious excitement heading into the day, being a first game with a new team.

McLellan has seen that extra little bit of excitement in his as well.

“He’s got that veteran savvy and he’s got a little spark in his eye right now, I think he’s excited about playing and finding a spot on his new team.”

Our first taste of the action for all four players is expected to come this evening, with all four establishing their roles on the team during the preseason.

Coming up later this afternoon, hear from several players and coaches about the excitement level of tonight’s game specifically, with regards to being back at STAPLES Center in a normal setting, with normal fans, in a much more normal season. It’s GAME DAY, let’s get excited!