One week out from opening night, setting the stage for the final battle for roster spots up front 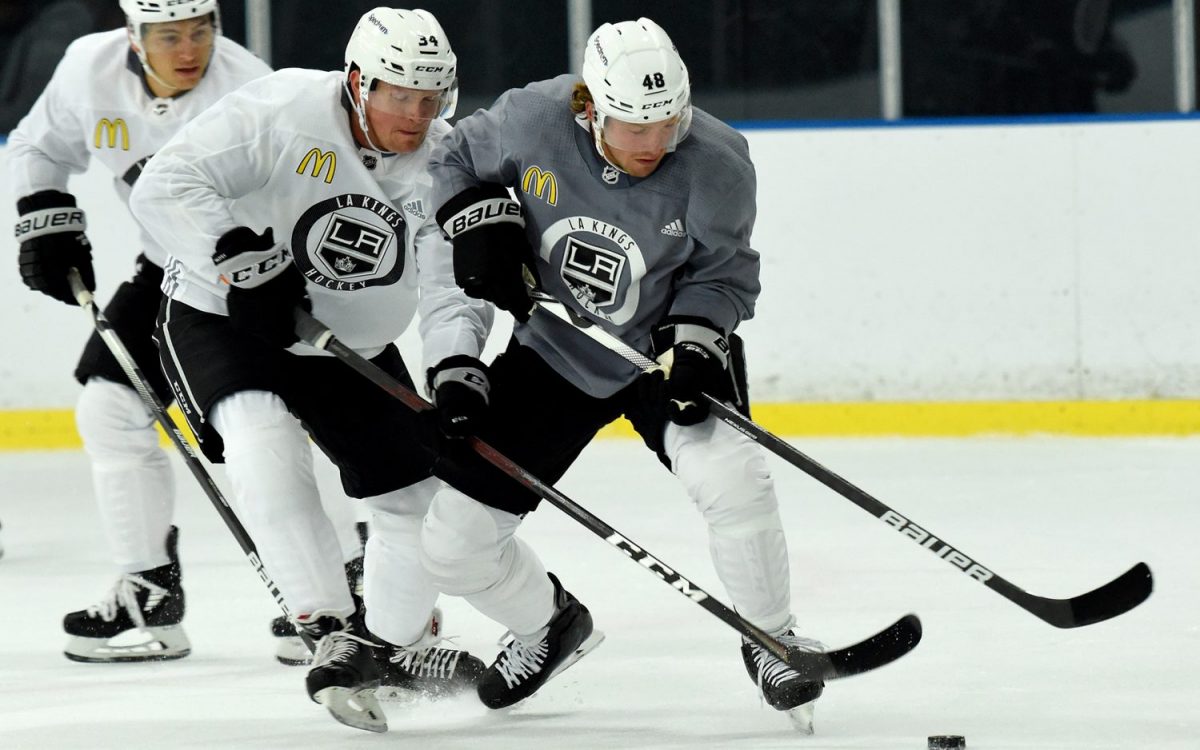 The LA Kings opened training camp with 39 forwards on their active roster. As of this writing, the number stands at 15 healthy forwards currently on the active roster, in advance of opening night.

For those doing the math at home, 15 one player more than the Kings will likely carry on the opening-night roster, which is due to the league early next week. With Arthur Kaliyev added back into the group this afternoon, the Kings are clearly considering multiple options, and decisions still need to be made.

With Andreas Athanasiou, a regular when healthy, working his way back from injury and a group of young, talented prospects knocking on the door, the competition still continues throughout camp, and will likely continue to do so into the season.

Further complicating the issue, or perhaps clarifying it, depending on your point of view, is the left-ankle injury suffered by Quinton Byfield in Tuesday’s exhibition game against Arizona. The fracture will keep Byfield out of the lineup indefinitely, which is a big blow for both the Kings and for the talented young forward, who had earned a spot on the opening night roster through his play throughout training camp, in the eyes of Head Coach Todd McLellan.

“Quinton Byfield, in my opinion, had earned a spot unless something dramatic happened in his play, but there’s another injury,” McLellan said yesterday. “Injuries will open up opportunities for some and they may never give it back. One man’s misfortune is another man’s opportunity to take advantage of it.” 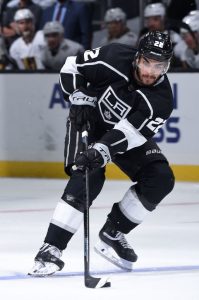 Opportunity is the name of the game here at Kings camp. Entering the first day, you could rattle off more than 20 names at the forward position of players who either had NHL experience, or have shown through their play that they might be ready to play NHL games.

That’s a great problem to have for the Kings, because frankly, that problem did not exist last season. The roster entering training camp a season prior felt all but set, pending injuries. When injuries or on-ice performance merited a roster move, it was an untested rookie coming into the mix, rather than someone with some experience under their belt.

Now, entering the 2021-22 season, the Kings will have extra forwards with NHL experience to their names, and a strong pool of candidates with the AHL’s Ontario Reign, ready to step in if the opportunity arises.

“We have the depth in the organization, and I know that we’re going to have to take advantage of it throughout the year,” McLellan said. “If a certain individual isn’t with the big club to start, it doesn’t mean he’s gone and forgotten, there’s a good chance that he might come up and never go back again, and vice versa. For a lot of them, don’t think that you’re here to stay, you’re here to earn your keep night in and night out. We still have one more game to play, and we’ve got a week to formulate what our roster might look like.”

Yesterday’s game in Anaheim saw the Kings enter nine players into the lineup who did not dress the night before against the Coyotes. After the game, McLellan said rather bluntly that last night’s contest was an opportunity for those on the bubble to either show that they merited perhaps a longer look, or that they did not.

In the first period, the Kings went down by three goals early, with players who needed to show out playing tentatively against a Ducks side that was more experienced on paper. McLellan made sure to remind the group what they were playing for during the first intermission, and we saw a very different Kings team during the second and third periods.

“We were giving numerous players second and third opportunities to try and work their way into the lineup,” McLellan said. “Did some of them do that? Maybe. Some probably played themselves off, but they needed to understand that it wasn’t just another exhibition game for them.”

It would be hard to walk away from last night’s game and ignore the contributions that Kaliyev made and it’s also important to put them into perspective. Kaliyev is a proven goalscorer at lower levels, who tallied three times in a comeback win. At the same time though, it wasn’t necessarily the goals that were all that McLellan was focused on. 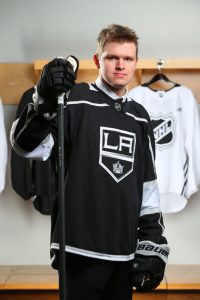 More likely than not, Kaliyev is not fighting for a spot on Anze Kopitar’s wing at this stage in the process. The top six for the Kings feels relatively set entering Opening Night, but spots amongst the bottom six forwards and on the active roster overall remain up for battle. No player last night for the Kings logged more time on the power play than Kaliyev did, and that made sense considering last night’s personnel.

That won’t, however, be the case during the regular season, considering the wealth options available. Therefore, while we know about Kaliyev’s impressive offensive toolkit, it’s about the other things he does that might draw attention to his game. And, in those areas, he impressed as well.

“There’s going to be a lot of talk about the goals he scored, and they were nice goals, he put himself in a real good position, but shift after shift, he was positioned well, he made good plays along the boards, he managed the puck well, he used his size when he needed to, I don’t recall him [making an error] defensively at all,” McLellan said. “A lot of other attributes to the game that are really important that came into play tonight in his game, and guess what, he was rewarded. That’s a really good sign for him and for us that he’s picking those things up.”

The Kings made the decision to keep Kaliyev on the active roster for at least the immediate future, with a series of roster moves earlier today that sees him sticking around with the NHL group.

How exactly Kaliyev factors in, and how the Kings decide to construct their season-opening roster, will likely come down to a few different factors, and it doesn’t necessarily mean just taking the 14 best individuals and calling it a day.

Roles filled in some instances can be just as important as individual talents, because the player best suited to be the 13th forward might not be the same player best suited to slide into a second-line role if that situation presented itself. How McLellan and his staff view the identity of the fourth line, and how that line slots in amongst the team’s identity as a whole, will go a long way towards who makes the team and how that group changes throughout the season.

“I think our fourth line can’t give anything back in a shift, and what I mean is that if we have some momentum, we can’t hand it back to the opposition when the fourth line comes out, and in my opinion, that happened far to often last year, McLellan said. “We’d build, build and then we handed it back, regardless who was on the fourth line, it seemed to happen night in and night out.”

Waiver exemption plays a role in the equation, as does asset management. Does sending down a player who does not require waivers to play in the AHL, as opposed to running the risk of losing a player who does, make more sense? Or, does that first player provide a significant upgrade over the other player, justifying the risk?

Situation, opponent and time of year also factor in. By design, the line might look differently on night one against Team A than it does on night two against Team B.

“For us, there has to be a maintenance of momentum, or an increase in momentum,” McLellan added. “How you do that is different based on individuals, whether it’s physicality, the ability to check, speed, tenacity on the backcheck, turning pucks over. Different ingredients give you a different look all the time, and we feel we have a lot to pick from. There will be nights where you need a more physical lineup, and nights when you need more pace, or a penalty kill type lineup. It’s just figuring out the ingredients right now, and who will make it in the end, we’ll figure out as the season rolls around.”

These are all questions that the Kings are currently pondering heading into the final exhibition game of the preseason on Saturday, when they will host the Anaheim Ducks. From that point, final decisions need to be made, which will present the overall picture of the first edition of the 2021-22 LA Kings. Buckle up, Insiders!