The Kings have committed to being more aggressive this season – What that means, in their words 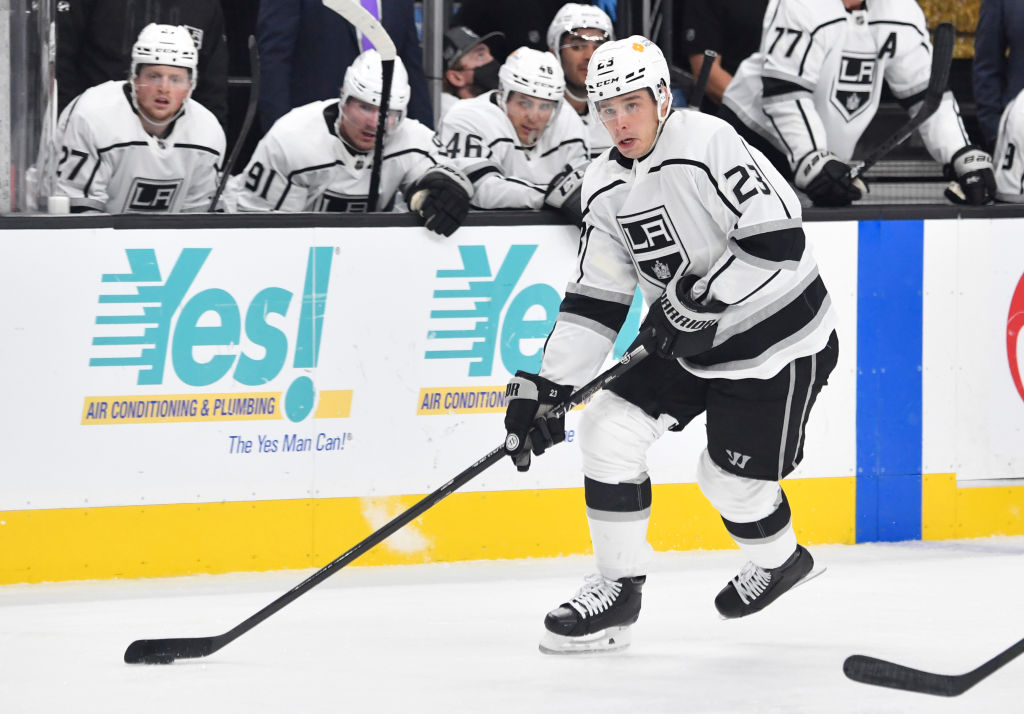 An early theme throughout training camp has been the Kings commitment, as an organization, to play a more aggressive style of hockey.

What’s important to determine first, is how we’re defining the word aggressive.

“Defining what aggressiveness is – I think when you think of aggressive, you think of bullying, running over guys, fighting – but it’s closing quick,” McLellan said. “It’s taking time and space away, it’s taking the game to the other team. It could be on the forecheck, it could be in the neutral zone, wherever it may be, and that’s why we’re using that theme more.”

Two seasons ago, his first behind the bench for the Kings, McLellan and his coaching staff implemented some of these same principles, and at times, you saw them in practice, especially early in the season.

The Kings did have a more aggressive mindset, though it didn’t necessarily translate into more success, at least at first. 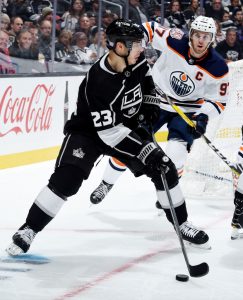 “We did it two years ago, but we did it in a really crazy way as players, I think McDavid had five breakaways in the first 20 minutes of the season against us,” forward Dustin Brown said. “We forechecked really hard, but maybe not very smart. Now, it’s little adjustments, more personnel, but I think it is an adjustment for our whole team to play a little bit more in your face.”

The Kings certainly played more aggressively early in the season, in the fall of 2018, but did so in a way that compromised the team at the other end of the ice. What resulted was sometimes a successful execution of the forecheck, as designed, but with a downside of allowing Grade-A chances at the other end.

As Brown details, the margin for error for the Kings that season was so slim. The team might do everything right on the forecheck one trip down, forcing turnovers and creating opportunities, but one slip up was a quality chance the other way.

“We would forecheck, turn over pucks and control the zone, and then we would forecheck [again] and give up a breakaway,” Brown explained. We were really good when we were on, but if we made one mistake, because we were so aggressive, it wasn’t a B chance, it was a Grade-A chance, and it bit us really hard. What ended up happening, because it bit us so hard, is we started pulling back and I thought last year, we didn’t forecheck much.”

Last season, the Kings found themselves overly reliant on the 1-3-1 approach in the neutral zone, a lower-risk, lower-reward style that helped to plug some of the holes defensively but afforded the team fewer opportunities to attack the other way.

In some situations, it was a comfort factor. As Brown noted, the Kings retreated into that alignment because of being burned too often from the aggressive style. He also noted that it was a familiar approach for he and some of the other veterans, who had played that way for so many years.

“I’m sure you saw it last year, we relied on how good we were at the 1-3-1, it was almost a comfortability factor,” defenseman Sean Walker said. “If we didn’t think something was going right, we’d just fall right back into the 1-3-1. I think this year, the main focus is being aggressive and only going to the 1-3-1 when it’s absolutely necessary. I think you’re going to see a team that’s a lot more hungry, more aggressive, turning pucks over and keeping the offense alive.”

So what has changed? While the beginning of the 2018-19 season offered a more aggressive brand of hockey, it wasn’t necessarily translating into more on-ice success in the short term.

For one, the Kings have upgraded their personnel, both internally and externally, from where they were two training camps prior.

Outside acquisitions such as Viktor Arvidsson and Phillip Danault have bolstered the forwards, while the Kings expect to see internal improvements from younger players such as Gabe Vilardi, Mikey Anderson and Tobias Bjornfot, helping to up the standard of the organization through the development of younger players.

Part of the personnel improvements have also come in the form of skating ability. The Kings figure to be a team that not only skates faster, but also plays faster, this season.

Arvidsson’s skating ability is well documented, as is that of several of the younger players beginning to enter the fold during training camp this season. Pairing those additions with players such as Adrian Kempe, Trevor Moore and Andreas Athanasiou, already with the team, and you’ve got an exciting looking makeup for the potential change in style. 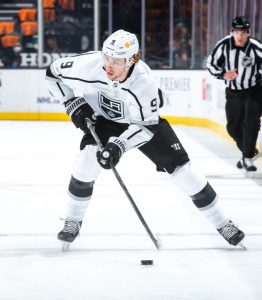 “For me, and for the players that we brought in, I think that [playing more aggressively] is a good thing,” Kempe said. “We have a lot of good skaters and that means that we can be more aggressive, win more pucks back, draw penalties…I’m happy with the way we’ve changed the way we play the game.”

Moore was quick to agree.

As a player who relies on energy, forechecking ability and playing with pace to find success, the style figures to fit Moore, as it does Kempe. The Thousand Oaks, CA native was a breakout player for the Kings last season, with his in your face style endearing itself to those watching, and his ability to bring a spark to the team something that stood out, despite the lesser-aggressive style overall.

Now, with a new approach in place, Moore is excited for how it can help both his game, and the Kings as a whole.

“I like it more,” he said. “You have to have your legs every night, and it takes a level of preparation to have that, but I think I skate well, and a lot of guys on our team skate well, and we can cause some fits for defenders. [We can’t allow] them to have an easy night, less backing out. It should be good.”

How this plays out in practice still remains to be seen. We’re just six days, and two exhibition games, into training camp and several NHL regulars have yet to appear in a preseason game. Early returns, from a young group, were evident in last night’s game in San Jose, with the team playing to that identity in the second and third periods. At the end of the day though, we’ll really get a better sense of the alterations in a week or so, as the team narrows down its roster to more of what we’ll see on opening night.

In the concept stage though, it’s a step forward, right alongside what the Kings have preached all summer – It’s time to get better.

With improved personnel in place, and the right mindset behind them, it’s time to get aggressive.

By Zach Dooley
104 Comments
Behind the Scenes