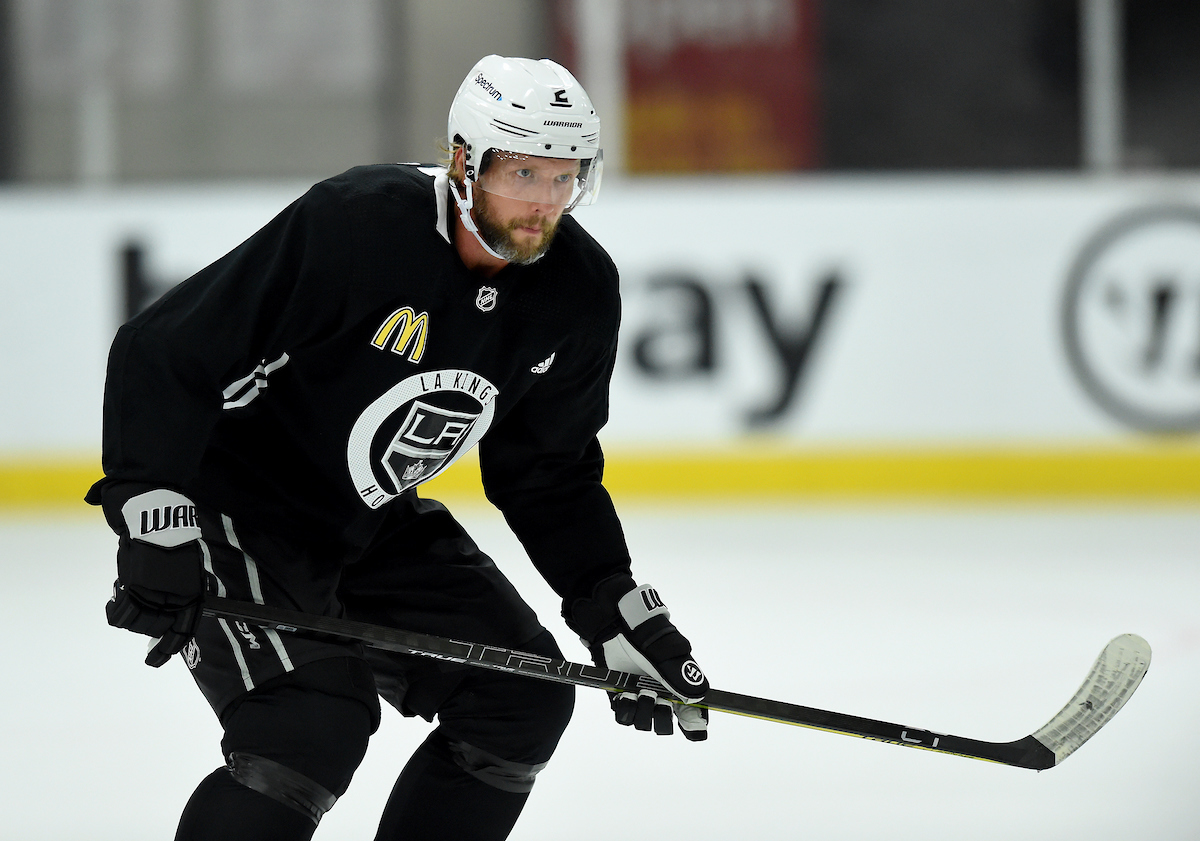 As we prepare for the Kings vs. Kings showcase in Ontario, this season’s edition of a modified Black and White game, let’s take a look at the three, big-name acquisitions from the offseason and how they’ve started to settle in during their first training camp in Los Angeles.

Viktor Arvidsson, Phillip Danault and Alex Edler bring their own levels of experience and expectations with them, with the arrival of all three expected to help continue to raise the level of play, and the standards of the Kings organization.

A look below at how all three players have started to settle in, plus how they’ve lined up with and potential roles and expectations early in camp.

Viktor Arvidsson
The first big addition of the summer also happens to be the first alphabetically, which gives us some good chronology in this story. 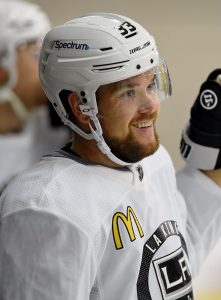 Arvidsson has skated on a line with Anze Kopitar and Dustin Brown during Days 1 and 3 of training camp, while he flanked Gabe Vilardi and Arthur Kaliyev on Day 2. Arvidsson has played exclusively on the left during the first three days of training camp, though he has experience playing on both wings, and indicated that he is perfectly comfortable on both sides of the ice, not altering his game depending on which side of the ice he plays on.

“It’s the same [regardless of which wing I play],” he noted. “I’m aggressive, I shoot the puck when I get the chance and do everything to get space for my teammates. I wouldn’t say it changes anything.”

The expectations for Arvidsson will also include power-play time with the Kings, with the energetic forward in line to at least get an opportunity to skate on the top PP unit at some point throughout training camp, something that Todd McLellan spoke on yesterday.

McLellan has been impressed with Arvidsson’s start to camp, immediately being drawn to the energy and enthusiasm that he’s brought to the group.

It didn’t take long for Arvidsson to endear himself to the coaching staff, as the Swedish-born winger attempted three shots on goal during the first 60 seconds of the first scrimmage. His ability to shoot and score has certainly been a calling card of Arvidsson’s from his time in Nashville, but he’s brought more than just that to the Kings

“The first impressions are that he’s got a tenacity to him, he’s around the puck,” McLellan said. “I know, from a physical stature, he’s small, but he doesn’t play small anywhere on the ice. He’s very aggressive with his shot, in the first minute [of the first scrimmage] I think he had three shots on goal, or three attempts, and he’s around the net a lot. All of the characteristics that we thought we were getting, we saw today, and there’s the energy. He brought a lot of energy to the practice, enthusiasm to the rink, so that’s a good thing as well.”

Phillip Danault
Since he was signed by the Kings to a six-year contract on the opening day of free agency, Phillip Danault’s name has been immediately slotted behind Anze Kopitar’s atop the depth chart at the center position. 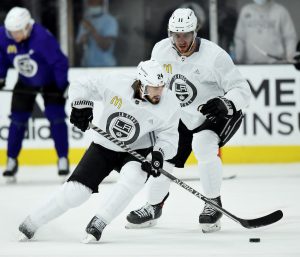 Danault’s addition gives the Kings two of the top two-way centermen in the NHL, with Danault’s ability to shut down opposing players rivaling that of the Selke-Trophy winning Kopitar. Talent down the middle in the top two slots, that really gives the Kings flexibility on a given night and gives younger centers such as Quinton Byfield, Gabriel Vilardi and Jaret Anderson-Dolan the opportunity to slot in lower in the lineup, relieving some of the pressure of having to take some of the burden off of Kopitar’s shoulders.

“We, as an organization, pursued this individual aggressively,” McLellan said yesterday. “We felt that he would fit with what we’re trying to do now, and also down the road. We’ve talked about his ability to help players lower in the lineup, to slot them properly, but also to help the players above, ie: Kopi, to take some minutes away. From what I’ve seen out here, and the questions he asks, I know that’s going to happen.”

Danault has had a strong start to camp, impressing in the scrimmages with his on-ice abilities. Danault has centered a line with Alex Iafallo and Vladimir Tkachev on the first and third days of training camp, while skating with Iafallo and Adrian Kempe on Day 2.

Regardless of combinations, McLellan has been impressed with Danault’s hockey IQ, and his ability to ask the right questions, showcasing his knowledge of the game.

“I think he’s very astute on the ice, he understands positioning well, he has a good sense of where everything is going to go,” McLellan said. “His questions are just clarification things on how we do stuff. He’s got a real good knowledge for the game. Thus far, he’s been a great guy to have around.”

Danault figures to play a prominent role in all situations for the Kings this season. With the current pieces in place, you’d expect to see his name as a part of the team’s second power-play unit, while his presence on the penalty kill will be extremely important. At even strength, he will occupy that number-two center position, helping to relieve some of the burden off of Kopitar’s shoulders, which is already something that McLellan is thinking about and how it can be best implemented.

While stating that Kopitar will still be expected to be a player who goes over the boards when the other team’s top skaters are on the ice, McLellan knows that on certain nights, against certain matchups, or perhaps when the team wants to free up Kopitar to be more offensively minded, Danault is available to take those tougher minutes.

“I think Danault can come in and accept that role,” McLellan said, of Danault spelling Kopitar in certain situations. “Last year, we had very capable and young centermen coming up, different flavors if you will, with size or skill. That’s a lot to ask of inexperienced players to do, and Phil has that experience to do it. He’s signed for a long time, he’ll do it now and he’ll do it later and he takes pride in doing it.”

Alex Edler
While he doesn’t have the flash to his game that Arvidsson might, or the long-term commitment that came with Danault, the Kings were still quite excited to add Alex Edler to their group this offseason.

Edler brings with him nearly 1,000 NHL games, all of which had come with the Vancouver Canucks. That experience on a Kings blueline that last year featured two rookies, and two players in their second NHL season, was valued and pursued this offseason by Rob Blake and his management team.

The veteran has partnered with Sean Walker throughout the first three days of training camp, pairing the heady, veteran Edler with the smooth-skating Walker. Both players were highly complimentary of the other through the first few days of camp, with Walker hoping that the pairing continues throughout camp and into the season.

Throughout his career, Edler was a point-producing defenseman, who excelled at both ends of the ice. Last season, his offense wasn’t quite there, though he logged difficult minutes for the Canucks, frequently facing off against the opposition’s top players. Edler’s evolution into a different type of player reminded McLellan of a similar transition made by Blake, when he played for McLellan in San Jose.

“In all my years involved in this division, he’s been one hell of a player,” McLellan said. “He almost reminds me in some sense of our General Manager. When I was coaching in San Jose, a little further in his career, he’s changing teams…when I talked to Blakey about it, it was exciting for him, it was refreshing for Rob when he came to San Jose and I hope Alex gets that as well. Everything’s new to him…sometimes it is a nice boost to your career later on.”

In coming to Los Angeles, the professionalism that Blake spoke of over the summer has rung true for McLellan and his staff. Edler provides a veteran presence on the Kings blueline and is someone who can help along the process for Mikey Anderson and Tobias Bjornfot on the left side, along with holdover Olli Maatta, who remains firmly in the fold.

“So far, he’s been tremendous,” McLellan said of Edler. “You can see his professionalism, he picks things up quickly, asks good questions, fits the group very well. I hope he can play at a high level and we get the best of him.”

BONUS – Vladimir Tkachev
Tkachev signed a one-year contract with the Kings early in the summer, coming over to North America from the KHL. At 5-10, the Russian forward has been a strong point producer for SKA St. Petersburg, amassing 80 points (25-55-80) over 100 games between 2019 and 2021.

Tkachev has skated on the aforementioned line with Danault and Iafallo on Days 1 and 3 and was listed on the top line in Group B during day two, as he featured on the left with Alex Turcotte at center and Andreas Athanasiou on the right.

McLellan had this to say about his early impressions of Tkachev –

“Skill, and a quiet player. He’s not flashy, you don’t always notice him, but he makes a lot of smart plays. He stays unengaged, which at his size is a pretty good quality, he’s not getting freight-trained all over the rink. When he gets the puck, when there’s time to create, he knows where to go and what to do with it. He’s a guy who [sometimes people] write off, because sometimes he’s quietly playing the game somewhere, but it’s the right thing to do. We’ll see as it goes.”

Stay tuned for a live thread from Kings vs. Kings, scheduled to begin at 3 PM today! The game will be streamed at THIS LINK. 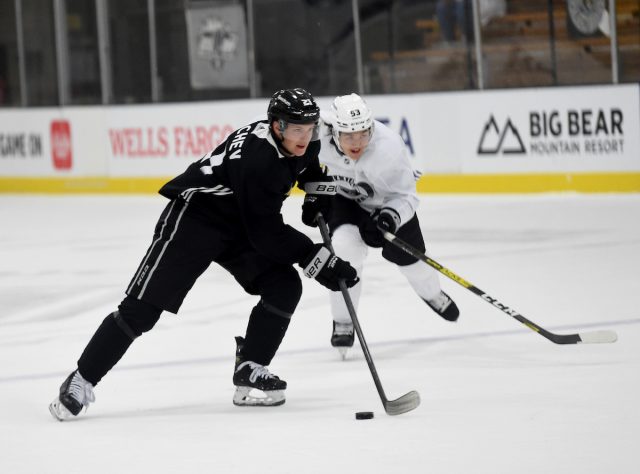