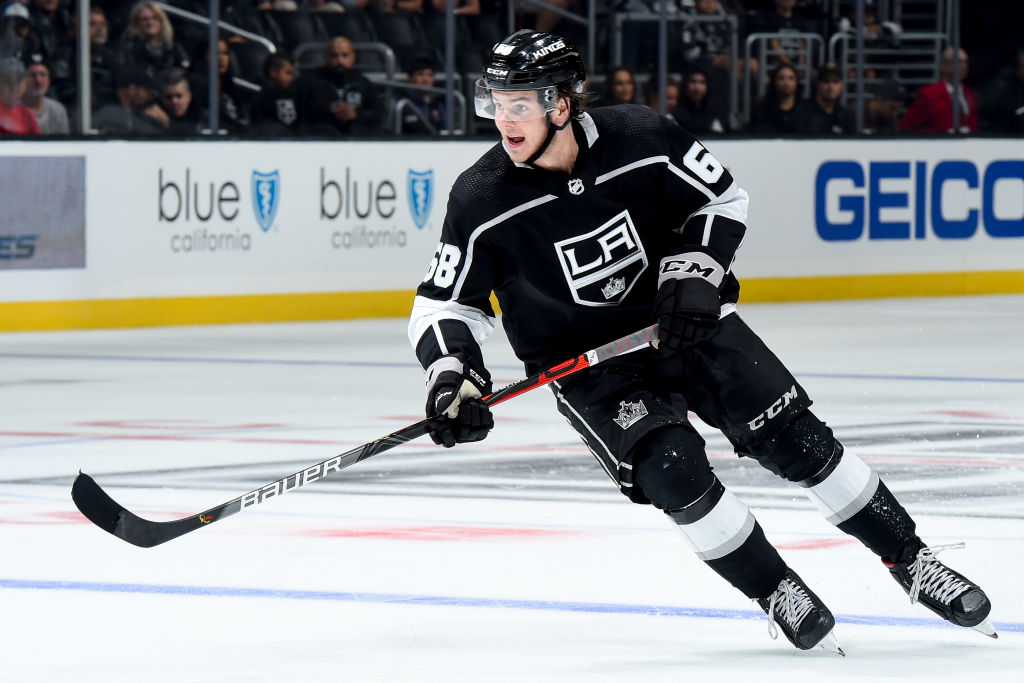 Kings vs. Kings is in the books, beginning a stretch of five games, or game-like activities such as today, in six days. The Kings split into two groups for a Black – White showcase in Ontario, consisting of two, 25-minute halves and a three-person shootout for each side.

Forward Samuel Fagemo, skating for Team Black, scored the only goal at 5-on-5, a strong individual effort, as he moved from left-to-right, deked to his forehand and beat Cal Petersen past the left pad. Adrian Kempe went on to score the only goal of the shootout session, as he deked to the backhand and beat goaltender Matthew Villalta on the glove side, with a shifty move.

The biggest theme today was that the players seemed to raise the level of intensity by at least a couple of notches from the scrimmages that have taken place each day of training camp. With fans in the building, a new atmosphere and the game jerseys replacing the practice ones, the energy, aggression, or whatever term you care to use was certainly enhanced today, with the team scheduled to begin preseason play tomorrow evening in Arizona.

The Kings’ exhibition schedule kicks off tomorrow evening in Arizona, followed by a game on Tuesday evening in San Jose. The team will then square off against Vegas on Thursday and Friday, with Frozen Fury in Utah preceding a trip to Vegas to end the week, followed by what will become a much-needed off-day for the players on Saturday.

On his goal in today’s showcase
I was going down the flank there and I got a pass from Arvy and I had good speed. I had pretty good speed and I was just thinking about taking the positive momentum and I was glad to see the puck go in.

On taking the momentum from Rookie Faceoff and hitting the ground running at main camp
Yeah, I think that helped me a lot, to get into game shape, get going at the pace, that was good for me.

On skating on a line with Anze Kopitar and Viktor Arvidsson today
It was so much fun, so nice, such a great experience for me. Kopi is [one of] the best centers in the league and Arvy is a sick player too. It was a really fun experience for me.

On the increased level of intensity today
I think it gives all of the players a chance to have more success heading into exhibition season. This was a different venue, there were fans, a lot more life-like, or real, and I thought the players responded well. It was as good of a Black and White game as I’ve been around in a long time. There were some skilled plays, there was some physicality, some good goaltending. We’re pleased that we are where we are, but we have a lot of work to do.

On Samuel Fagemo
I think Sammy gets lost in the talk, or the hype, about the early first-round picks and that type of stuff, but we haven’t forgotten about him, he’s a hell of a player. 18 months ago, he was one of the top scorers at the World Juniors tournament, and he does a lot of things well. Not only did he score tonight, but he checked well, he made smart plays with the puck in different areas. His game has grown, and he has an opportunity, he has a real good chance of staying if he continues it.

On some of the strides he’s seen from younger players from development camp through the preseason
The ones that are left here, going all the way back to development camp, they’ve done a good job, and some were expected to improve. I think Quinton Byfield, over the last two or three days, has been a real nice player. Tonight, he had a real good game, he created opportunities and he played well, and we expect that from him. [Jordan] Spence, for example, we weren’t sure what to expect. We knew he was a really good player, but he’s grown on us, each and every night he comes in and seems to get better. Grans, we heard a lot about him, but we’d never seen him play, I think he’s making strides. Some of that is them feeling more comfortable, adapting and adjusting, and some of that is them improving.

On his plans to rotate the squad over the first four exhibition games
We have a large group that we need to look at. Tomorrow night, we’ll see 20 players play and in all likelihood, we’ll see a different 20 players the next night. That will knock 40 players out for at least one game. We’ll still have some veterans that will not have entered the fray yet, and we’ll get as many of these young kids in the lineup as we can. Obviously, you want to win every night, and I expect our guys to play that hard and push for the win, but it’s exposing them to that experience that’s going to be really important right now. Pinelli, Chromiak, Grans, they will get an opportunity to play and see if they can take it up another level, another notch. We’ll eventually start whittling it down, making it smaller and smaller.

On potential personnel for tomorrow night in Arizona
Probably the most senior player will be Adrian Kempe, he’ll be in the lineup, and after that it will trickle down from there. You won’t see Kopi, Brownie, Doughty, even Arvidsson and Edler won’t play. There are rules that you have to dress a certain number of veterans, and we’ll have that quota filled, but it will be filled with young veterans.

The Kings are scheduled to begin training camp at 10 AM tomorrow at Toyota Sports Performance Center. The team is slated to take on the Arizona Coyotes tomorrow evening at 7 PM to open exhibition play.