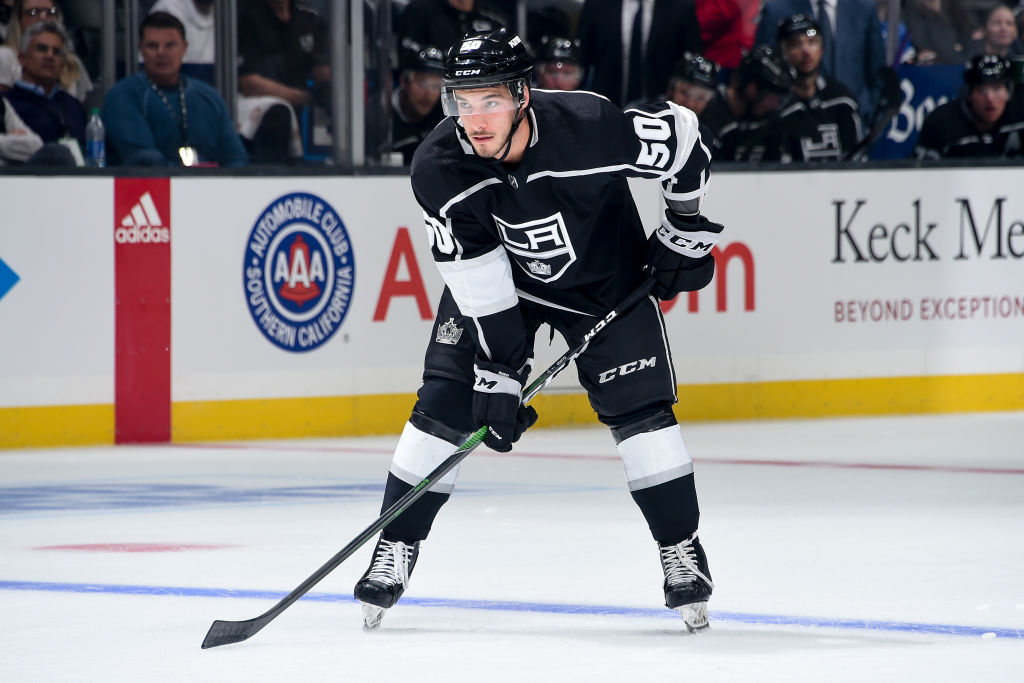 The LA Kings skated to their second consecutive victory during the 2021 Rookie Faceoff, with a 2-1, shootout win over Arizona on Sunday evening at Gila River Arena.

As the shutout streak for the tournament approached 100 minutes, Arizona broke the 0-0 deadlock towards the end of the second period, as forward Dylan Guenther fired through a sea of traffic in front of Kings netminder Jacob Ingham, for the first goal of the evening.

The Kings answered back through forward Alex Turcotte early in the third frame to knot the score at one. Turcotte drove down the left-wing, fired a shot on goal was stopped, but the rebound ricocheted off of an Arizona defenseman and into the back of the net for the goal.

The teams each had several opportunities to win the game throughout the third period and overtime, with each team having a 4-on-3 power play, but neither was able to break the deadlock. From there, we progressed to a shootout, where Tyler Madden scored the game’s only goal in the skills competition.

3 Takeaways
1. As easily as Friday’s game seemed to come to the Kings, and right off the opening puck drop too, tonight’s game did not start the same way. The Kings seemed to be fighting it a bit early in the game, before putting together a strong third period to comeback and eventually earn the victory. As you’ll see in the video below, Tyler Madden took the slow start upon himself and some of the other more experienced players. He took ownership and believed the team improved as the game went on, which it generally did.

2. Alex Turcotte was, in John Wroblewski’s eyes, the most consistent Kings player across the first two games of the tournament. Turcotte was noticeable tonight, even when the team struggled. His ability to get on pucks in the offensive zone and create havoc below the goal line led to multiple chances in the first period, at times the only ones the team had early on. Turcotte has shown an impressive blend of sandpaper and skill here that has made him an effective player over the team’s first two games.

3. While you could point to goaltending as a weakness at times for last season’s Ontario Reign, there has been no such thing here this season. Following Matthew Villalta’s shutout win on Friday, Jacob Ingham stopped 32 of the 33 shots sent his way this evening, making it one goal allowed from 125 minutes at the tournament as a whole. Ingham made two particularly impressive saves in the third period – one each with the blocker and right-pad – as he backstopped the team through the third period and overtime, eventually into the shootout.

Jacob Ingham
On stay engaged and ready without much shot volume early
Yeah, it’s tough, especially the first game in a couple of months. You play those inter-squad games during development camp, and they’re good and all, but nothing can re-create an actual game until you get into one. Not having much action in the first period was pretty tough, they only tested me once or twice in the first, but in the second it was re-setting in the room and doing what I usually do.

On following the tone that Matthew Villalta set with the shutout on Friday
He set a great tone for our team. Everyone played well, it was awesome to watch from the bench. Being really close to Matty, talking to him yesterday and asking him how he felt during the game and for a couple of things to look for, he was just trying to give me a couple of pointers and keep my feet under me. All of those things were really helpful, just to think about. We haven’t really played in awhile, so just for him to go out there and get a shutout, he obviously knows what he’s doing and he’s doing it really well. It’s nice to have that comradery between goaltenders.

On if the goalies got the playing rotation in advance
Yeah, they gave us the rotation, once I knew Matty was playing on Friday, I was going to back up, I knew I was going to play [today]. It’s nice to know beforehand, it gives yourself some time to prepare and do the things you have to do just to feel ready, go in and play your game.

John Wroblewski
On his overall takeaways from the game
I think we showed some of our “rookie” tonight. It is a rookie camp, a rookie tournament and maybe some of the successes that guys had, and the team success we had the other night, we probably took for granted a little bit coming into tonight’s contest. Credit to Arizona, I thought they competed very hard. They earned a lot tonight.

On Alex Turcotte’s game
I thought tonight, he showed his game as well as anyone did out there. When you say feistiness, tenacious and add that skill on top of it, you’ve got him pegged, that’s who he is. I thought these first two games, he’s probably been our most consistent [player] up front. It’s a small sample size, but I’m proud of the way Turcs has handled himself. He missed a little bit of time right before camp too, so good for him to hit the ground running. His result was awesome, having missed some of that development camp. For him to be able to respond and come through with two solid games was commendable.

On the rotation of players for tonight’s game, and tomorrow
[Sitting Fagemo and Kupari tonight] was pre-planned. We have a plan for tomorrow but that can be adjusted too. I don’t have any comment yet on the lineup for tomorrow. I might go in there and say that this guy needs to play after his performance tonight, or I might say that a guy needs a day off to be ready for main camp. Management is pivotal with those decisions at rookie camp, so we’ll see what they have to say and react from there.

On looking for guys to build from game-to-game in a tournament like this
With the players that we’ve coached in Ontario before, they have a certain amount of credit built up in their accounts. We know what they can do for us, we trust them in certain situations. What they need to make sure of – the mark of a professional is consistency – is that the credit they have in the account with the big club is, for a lot of them, isn’t there yet. This is the chance for them to display that consistency, which as I alluded to is the mark of a professional. I think there might have been some performances tonight that may have detracted and taken some credit out of the account. I don’t know if those guys are going to get in tomorrow, that didn’t have their best performance, but they might be rested for main camp too. They understand the message, they understand where they’re at, the exact phrasing. I trust all of these guys, and they have to earn the trust of the big club too. The mark of a professional is that consistency.

The Kings will not skate tomorrow morning in advance of the early faceoff against Vegas. Puck drop is set for 11 AM from the Ice Den, to conclude the 2021 Rookie Faceoff.