By All The Kings Men
50 Comments
Share This Article 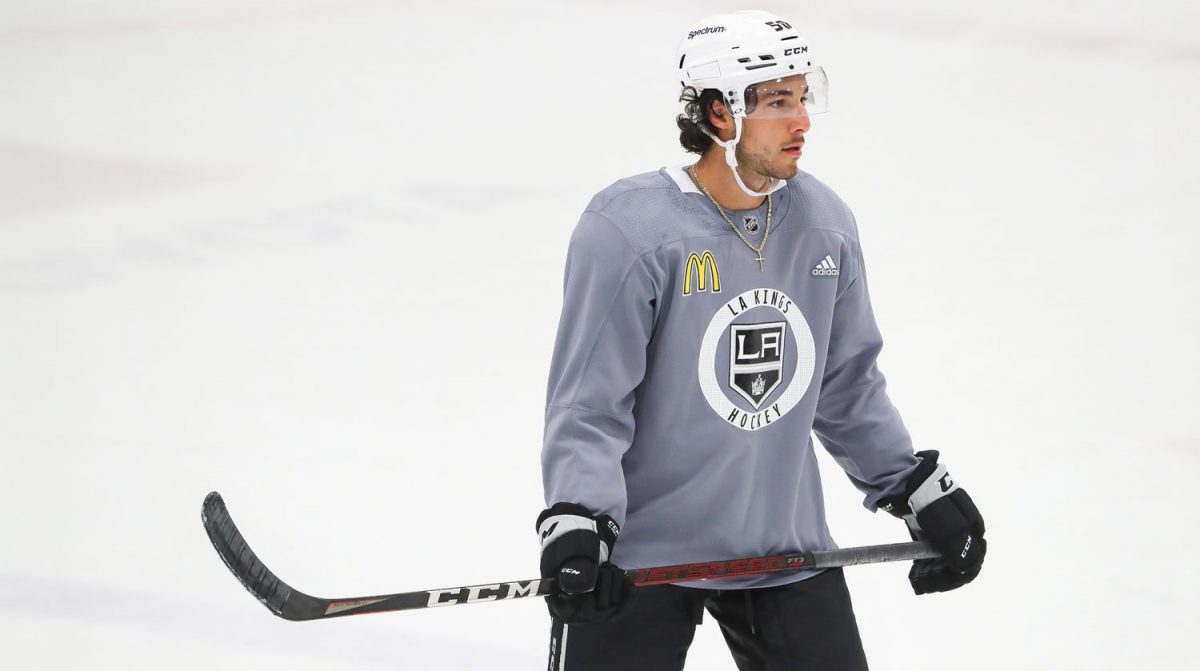 LA Kings defenseman Sean Durzi joins Jesse Cohen and Jack Jablonski to talk about the LA Kings 4-0 win over the Colorado Avalanche in their opening game at the 2021 Rookie Faceoff hosted by the Arizona Coyotes. Durzi wore the captain’s C in the game and was among the most impressive skaters during the convincing win.

Entering his third professional season, Durzi is one of the more experienced players on the roster this weekend, having played nearly 80 AHL games from 2019-21. With several younger defensemen around him this weekend, the Ontario native talked about the honor of being named Captain, Ontario Reign coach John Wroblewski and his approach to the upcoming season.

Durzi on being named captain of the rookie team
No matter where you are, or what level you’re playing at, it’s always an honor to wear the C. It shows that the staff and the players have a lot of faith in you and trust you to be their leader. I think, especially in the Kings jersey, you take a lot of pride in that. This week right now, we’re representing the LA Kings organization, so it was an honor. It didn’t change too much [for me], I just played my game and let my natural personality do the rest.

On his offseason focus, heading into a new pro season
A big thing for me was shooting, working on my shot. Ways to get more pucks to the net, ways to get more power, velocity, change angles, better release, a lot of things. I experimented with different shot types this summer and find new ways to get my shot off. If I can be a dual-threat, shooting the puck and passing it, it can only up more lanes for myself. I really wanted to come into came in good shape, good conditioning, and a lot stronger. I think I tried to put on some pounds this summer, with good muscle, which is hard to do, but I think I put a lot of time into building the right strength to the right spots, to help me on both sides of the puck.

On the importance of a strong start to the season
It just set the tone for the LA Kings season. It’s not much, it’s a rookie tournament, but we’re representing the team, we’re representing the organization and we’re not just coming here to play, we’re coming here to win. It doesn’t matter what you do, if you get to this level, you want to win, you have that competitive drive. As soon as you get out there, you realize this is a game, this is competitive, it’s competitive hockey. It’s fun and you’re trying to win. A lot of guys here know we’re here to win, even though it’s a rookie tournament, a lot of guys are taking this as a try out. It’s a good way to start the season off on the right foot. We knew that going in, we played a pretty hard game, and I think we’ve just got to keep building, build this right into main camp.

More to come today from Arizona, where the Kings are preparing for Game 2 of the 2021 Rookie Faceoff, tonight against the Coyotes!

By All The Kings Men
50 Comments
Audio

By All The Kings Men
189 Comments
Audio