By All The Kings Men
190 Comments
Share This Article 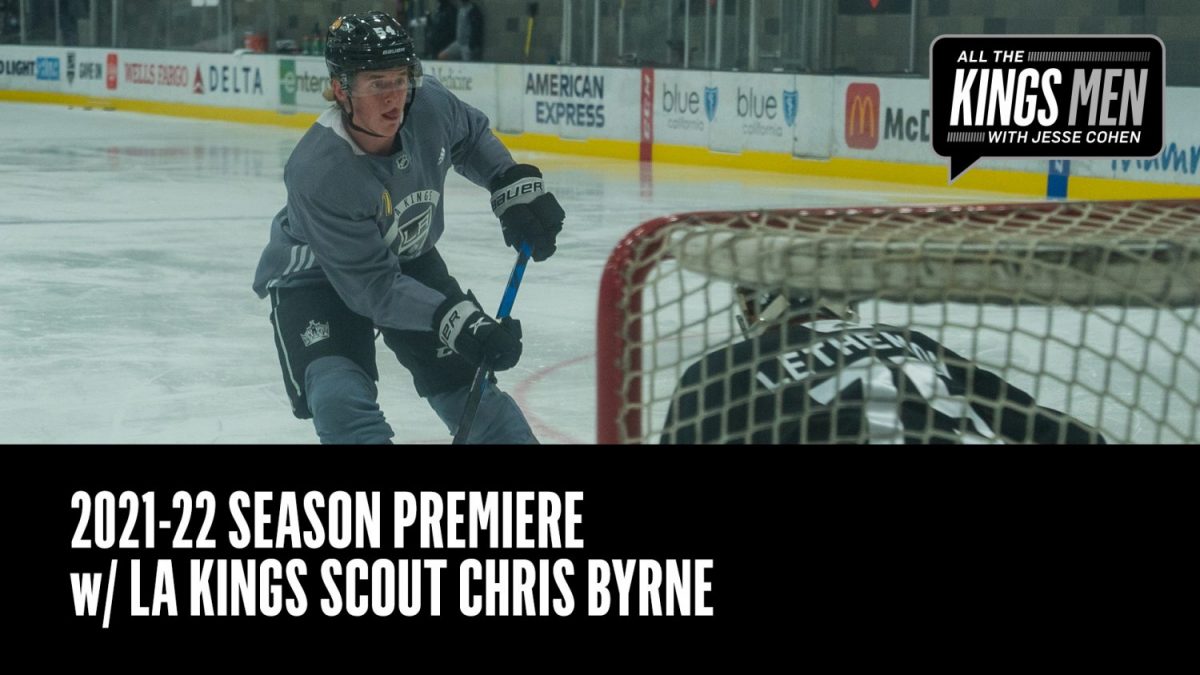 LA Kings amateur scout Chris Byrne joins host Jesse Cohen on the season premiere of All The Kings Men. Byrne made the Kings first-round selection at the 2021 NHL Entry Draft and talks about the scouting process that lead to the selection of Brandt Clarke at 8th overall. The interview with Byrne begins at 11:50 after an introduction to many of the changes coming in the 2021-22 season.

Byrne is the organization’s primary scout for the OHL, and watched a lot of Clarke during his 2019-20 season with the Barrie Colts. Byrne weighed in on Clarke’s strengths both offensively and defensively, as well as on the varying opinions on Clarke’s unique skating style and some of the other quirks in the scouting process in general.

Chris Byrne on what the Kings liked about Brandt Clarke in the draft (18:50)
He clearly wants to be a player, and he was clearly excited about the draft, being drafted and being in LA and it’s genuine. A really solid kid, who is really excited to be a player.

In watching him, I think the thing that comes to me first and most importantly is the abiity to make plays. For our team, and being able to play in the NHL, be an NHL player, we need [you] to be able to make plays. Not out of nothing, but maybe where other players can’t see that play, or don’t have the deception or the timing to make a play out of a very tight situation, for me, watching him, that was what he leads with. He has a very good defensive stick. Maybe people classify him as only an offensive player, or as an offensive defenseman, but he has a very good stick. He’s competitive, he wants to win, he’s willing to use his body to defend and get into tighter, tougher areas defensively, plus his skill level is good. His hockey sense, hockey IQ, his brain is the thing that he leads with for me.

On when Clarke entered onto the Kings scouting radar (20:50)
He’s from Ottawa, I’m from Ottawa, so I’ve known of him and his brother for years. Watching him play as a 16-year-old in the OHL, I think he started his OHL exhibition games with four or five goals in his exhibition games, so obviously right off the hop he’s going to spark interest. He had a slower first half as a 16-year-old year and a very good second half. I can remember watching a game with Rob Blake, he was in to watch somebody else, and I said here’s a kid who’s a pretty good player for next year’s draft. We were aware of him as a 16-year-old, as a top player coming into the OHL, and I enjoyed watching him that year.

How strong is Clarke defensively (24:25)
The parts that we talk about, his reads, his sense, his thinking the game, he thinks it very quickly and that helps him in both zones. Obviously, he has work to do, defensive positioning, gaps, some of the angles that he takes into corners, the fine work defensively, but his instincts I think, defensively, are very good. You worry about an offensive player, that he’s not willing to compete defensively, but I think [Clarke] competes very well. He’s willing to use his body, he wants to defend, he wants to break up plays with his stick. Obviously he has work to do defensively, as all young players do, but I think his instincts are very good.