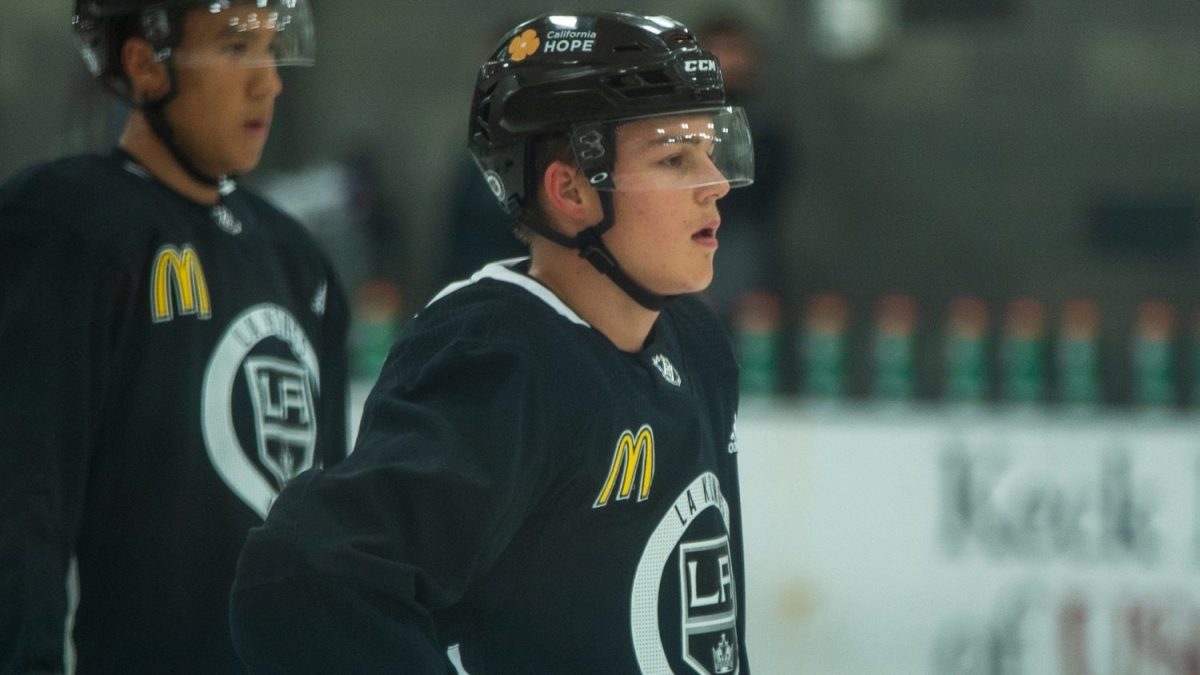 In his end of season exit interview, at the conclusion of the most recent AHL campaign last May, Ontario Reign Head Coach John Wroblewski set a mandate for the young LA Kings prospects going into the offseason.

“This has to be a business summer, it can’t be that we’re going home to vacation,” Wroblewski said. “We’ve got to hunker in, round out our athleticism and attack the summer. Then we can see huge jumps with our young core, because these guys are still at an age where they can make massive leaps in their athleticism.”

Three months have come and gone since the Reign season came to a close and last week’s LA Kings Development Camp provided an opportunity for many of those young players to show they’ve taken care of business. The performance of 2018 first-round draft pick Rasmus Kupari looked like he took his coach’s comments to heart.

The forward made a big impact for the Reign during the shortened 2020-21 season, his second year as a professional within the Kings organization. With 23 points in 32 American Hockey League games on eight goals and 15 assists, Kupari earned his first two call-ups to LA, which included his first NHL goal against Colorado on May 8.

After observing his performance last season, Reign General Manager Richard Seeley said Kupari made big strides after his battling through an injury the year prior.

“To see him come back healthy and skate and play with the power he did to progress was awesome,” Seeley said of the Kotka, Finland native. “He was one of those maturing processes you can see right before your eyes where he’s going from a younger teenager to what you would almost call a man. It was great to see.”

Seeley then echoed his head coach’s comments about how important the summer is for young prospects.

“You’re starting to engrain the routines in them, and I think they’ve had some great exposure of what it takes to be a pro player,” Seeley said. “They’ve had their eyes open to what kind of work goes in on the back end to be successful on the ice. Their summer with working out is inherently important.”

The first opportunity for many of these players to formally put those things in play came last week, at Development Camp. Kupari was one to put his summer process to the test, as he showed off his speed, strength and smarts throughout the week, which have many within the organization convinced he’s prepared to take one of those ‘huge jumps’ ahead Wroblewski was hoping for.

“I think it was a good camp,” Kupari said. “I got to know new guys, work on some things we needed to learn as forwards, and all the development staff did a great job with us.”

The natural center also shed light on the summer work he did to prepare himself for next season, with a focus on direct play and using his tools to get into dangerous areas on the ice.

“I think I’ve tried to be a little more direct with my game,” Kupari said. “I’m trying to drive to the net and use give-and-go’s and that type of game to use my speed. Maybe try to shoot a little more too. I want to show my skills, and there are some situations you can show what you’re able to do with dangles and that stuff, but I need to keep working hard every day.” 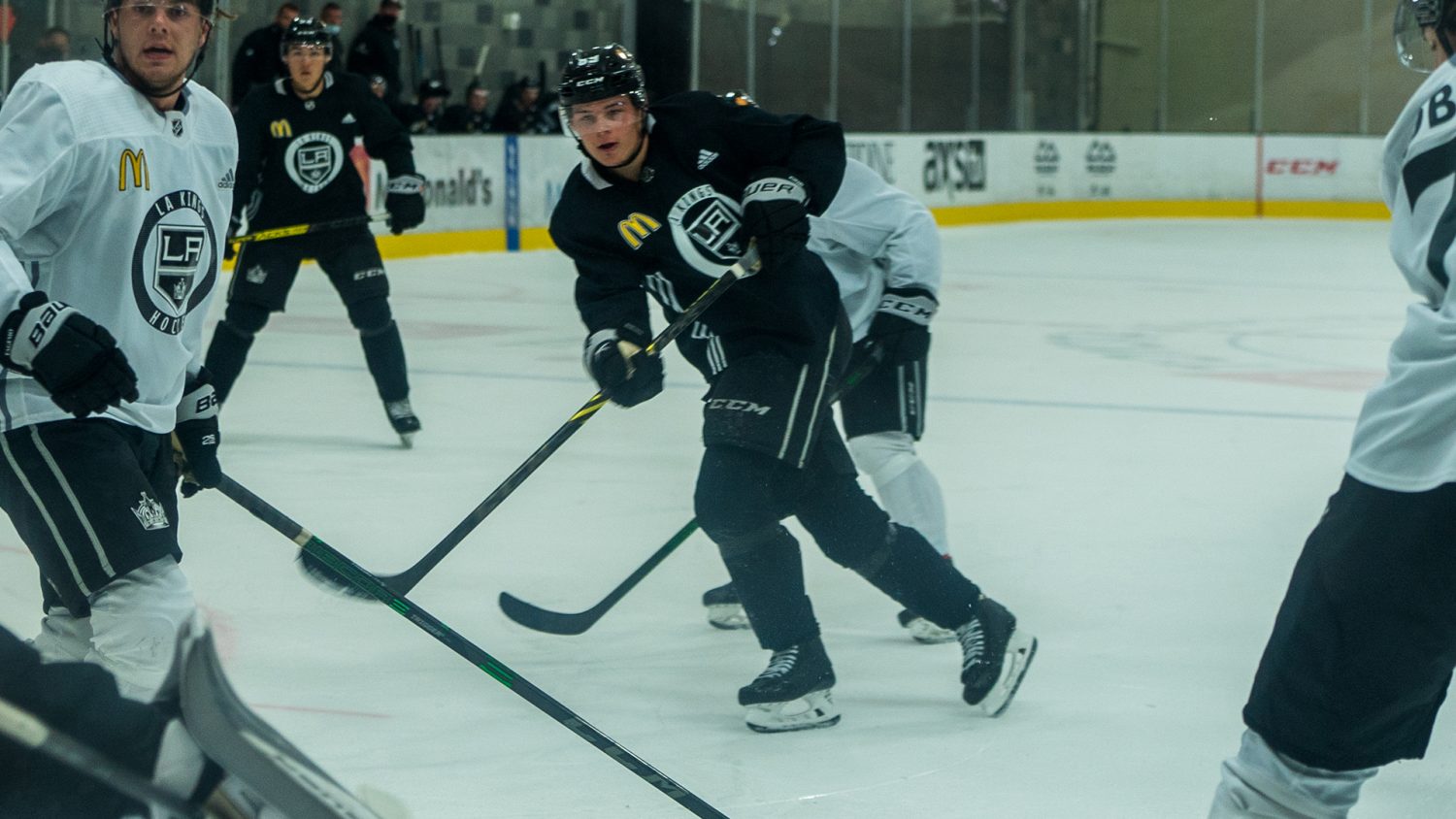 On four of the camp days, the prospects were split up in their position groups for closer work with development coaches. For Kupari, that meant instruction from former Kings forward Jarret Stoll, who is now part of the player development staff and was on the ice with the group each day. Like Seeley, Stoll has enjoyed watching Kupari’s progression and saw signs that he’s closer than ever to being able to contribute at the NHL level.

“I could tell he got stronger over the course of the offseason,” Stoll said. “He’s a great kid who has character, pays attention, is focused, and really cares about his game. He goes through the reps and practice wanting and trying to get better. That’s what development is all about. It’s for the little things that we as an organization feel are important, like puck protection, wall play, passing and hitting the net, things that you’ve got to be able to do in order to be a regular NHL player.”

Speed and skill have always been areas that have stood out for Kupari, every since he was drafted by the Kings back in 2018.

Kupari has put those tools to work over the last two seasons playing with the Kings and Reign, and Stoll highlighted the excitement he generated at camp this past week.

“He’s an exciting player to watch,” Stoll added. “When he didn’t have the puck you noticed his speed, but when he did you noticed his skill. He’s gotten better for sure using his size; you don’t realize how big he is until you’re right beside him. For a big man like that who can skate and have the skill level that he has, that’s pretty scary. The sky is the limit for him. He loves working hard and is great to coach.”

With Development Camp now in the rearview mirror, the next step for Kupari is participating in the Kings’ rookie camp during mid-September, as he was named as a part of the organization’s 26-man roster yesterday.

There, he will have a chance to get more familiar with his teammates, some of whom were with him in Ontario last season. Others are newer to the organization and quickly acclimated themselves to the forward group at development camp, like newly drafted forward Francesco Pinelli.

“I had some good chemistry with Pinelli and [Tyler] Madden, one goal we scored was nice,” Kupari said. “There were lots of guys who did a great job all week long.”

LA’s group of prospects will travel to Arizona for the 2021 Rookie Faceoff, which features three exhibition games against the Avalanche, Coyotes and Golden Knights in a four-day span from Sept. 17-20.

After that, Kupari will have an opportunity to try and crack the Kings’ roster when main camp opens later this month, as one of many forwards battling for spots up front.

“We have lots of young guys but [the Kings] have added some older guys as well which is good,” Kupari said. “I’m looking forward to camp and I’m ready to battle for a spot on the NHL roster.”