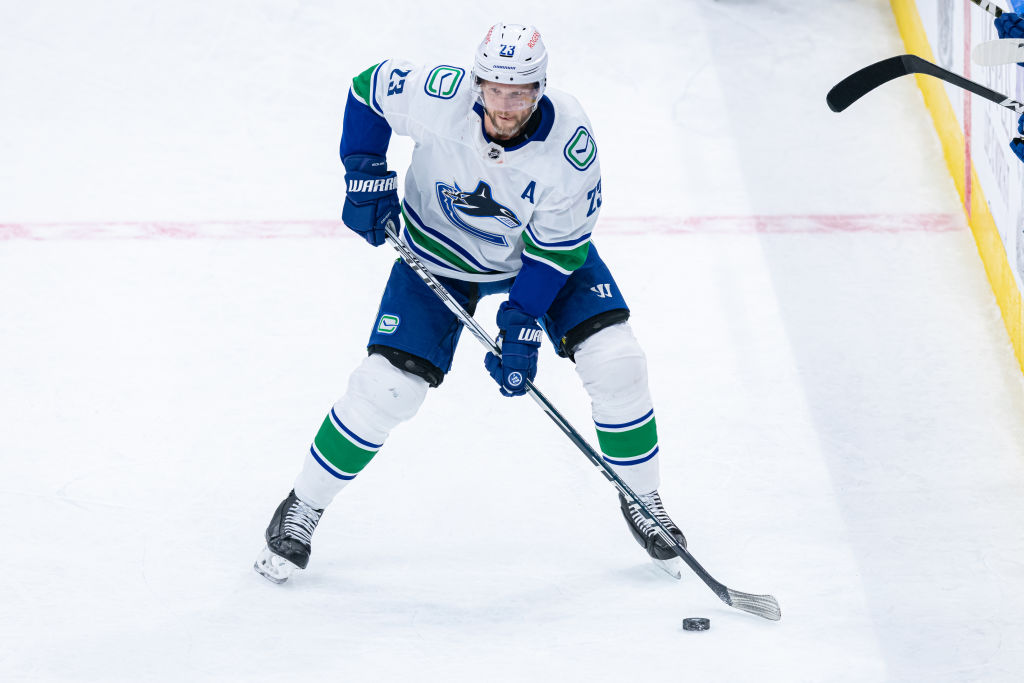 If you look at the statistical history of the Vancouver Canucks, you’d see the name Alexander Edler atop the lists for most categories amongst defensemen in franchise history.

No Vancouver blueliner has skated in more than Edler’s 922 games, and no defenseman has tallied more goals (99), assists (310) or points (409) in a Canucks jersey than Edler has. A franchise icon, who was drafted by the team back in 2004 and has played for the NHL club since 2006.

Come October, however, Edler will trade his blue and green for the black and white of Los Angeles, after signing his first-ever contract with a different NHL franchise. As he navigated the free agency process for the first time, Edler was influenced by the heavy interest shown by the Kings, and the belief and role they saw for him this season.

“They just showed a lot of interest,” Edler said. “They thought that I would fit in with the team, they all believed in me and they showed interest early. They saw a part for me with the team and the organization, to play in a lot of different situations and helping out with the young talent we have here. It just sounded good to me.”

Edler noted that the Kings were not the only team to express interest, though they did express the strongest amount of it. As noted above, it was the interest shown, and the organizational fit, that sold him on LA.

He called the process of being a free agent a combination of excitement and stress, as he went through the process for the first time at 35 years old.

“It was different, something I’ve never done before,” he explained. “A little stressful, not knowing if anyone would be interested. Stressful, but also exciting. It turned out good, so I’m happy.”

Though free agency these days feels like a need to make snap and immediate choices with regards to a player’s professional future, it wasn’t just an overnight decision either, to depart the only organization he’s ever known at the NHL level.

Last season was challenging for everyone around the league, and perhaps for none more so than the Canucks, who experienced an extended, in-season pause due to complications with COVID-19.

The Ostersund, Sweden native noted the difficulties faced last season in Vancouver, for both himself and the team as a whole. Edler’s offensive numbers were down, but so were those of the Canucks as a whole, as they ranked seventh from the bottom of the league in terms of goals scored. Though the memories he had in Vancouver were strong, it was time for a change.

“It was just the feeling I had,” he noted. “Last year obviously was the year that it was, it wasn’t a great year for our team, or for me personally. I felt like I wanted to try something new, I think I wanted to get that spark back…not that I haven’t had fun, a lot had to do with not having fans last year, but I just felt like it was time for me and my family to try something new. We decided that, and we’re happy with our decision.” 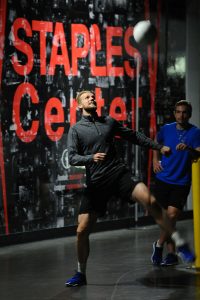 LOS ANGELES, CA – OCTOBER 13: Alexander Edler #23 and Sven Baertschi #47 of the Vancouver Canucks warmup outside the locker room before the game against the Los Angeles Kings at STAPLES Center on October 13, 2015 in Los Angeles, California. (Photo by Juan Ocampo/NHLI via Getty Images)

Though the Kings are a new home for Edler, they hardly feel like a stranger.

Edler has faced off against the Kings 44 times during his career – he faced just six opponents more regularly as a Canuck – and has a good idea of what the team’s veterans bring from facing off against them so regularly.

“I’ve played a lot of games against them, and I know how good they are and how hard they are to play against,” he said, of the team’s core in LA. “It’s going to be good to be on their team from now on, so I’m looking forward to that.”

Edler said that pretty much all of that group has already reached out to him to greet him as a new member of the organization, noting how “welcoming” the players have been so far. Now, as a teammate, he hopes to be a part of that hard to play against mentality that he’s experienced on the opposing bench.

Being difficult to play against typically entails playing, and excelling in, difficult minutes. When you play in Western Canada, that meant squaring off against Connor McDavid and Leon Draisaitl in Edmonton, Johnny Gaudreau in Calgary and Mark Schefiele and Blake Wheeler in Winnipeg. It just so happens that those were Edler’s five most common opposing players over the last three seasons.

As he’s evolved throughout his career, Edler has grown more and more into that player who takes on the toughest of opposition on a nightly basis. A staple on the power play early in his career, Edler has reversed course in some ways, logging minutes on the penalty kill during the 2020-21 season than not just any other Canucks skater, but any player in the NHL this season.

While acknowledging what his role was a season ago, Edler is ready to accept whatever assignments he’s given with the Kings and believes he can excel however he is utilized.

“I think I can be used in all kinds of situations,” Edler said. “From game-to-game, how the game goes and we’re playing, I just want to be used in whatever situation will help the team the most, that’s the player I am. I want to win the game, and whatever the coaches need from me I’ll be ready to do. That’s the mindset I have.”

In signing Edler, Kings General Manager Rob Blake saw a player who can help with some of those heavier minutes that he’s played recently with Vancouver.

As noted above, the Kings showed an aggressive interest in Edler’s services, and Blake gave insight as to why back when he initially signed the contract.

“In Alex Edler, we get a very solid veteran, who’s capable of playing minutes, he plays a heavier style and has played against top lines throughout his career,” Blake said. “Really stabilizes that left side, in the amount of minutes and the quality of opponents he can play against.”

Throughout his time with the Canucks, Edler frequently wore an “A” and was an alternate captain during his final five seasons with the organization. While he certainly has something to offer the younger members of the Kings on the blueline, he sees himself as a “lead by example” type of player, who wants to pass along things that some of the leaders he’s played with during his career passed on to him. 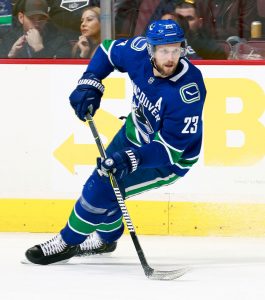 VANCOUVER, BC – NOVEMBER 27: Alexander Edler #23 of the Vancouver Canucks skates up ice with the puck during their NHL game against the Los Angeles Kings at Rogers Arena November 27, 2018 in Vancouver, British Columbia, Canada. (Photo by Jeff Vinnick/NHLI via Getty Images)”n

“I’m mostly just trying to lead by example,” he said. “I’ve had some great leaders early in my career, who showed me what it takes to be a good player, to be a good defenseman in the league. I’m trying to think about what they did for me, and do the same thing for the young guys I’m playing with now.”

Blake saw similar things in Edler and views his newest defenseman as someone who can not only contribute in the here and now on the ice, but also as the type of person he wants to surround his young, developing players with.

“First and foremost, he’s a quality teammate,” Blake said. “Anything we’ve heard since it’s come out that we’ve agreed to terms has all been about the quality, the type of teammate, the type of professional you’re going to get every day. When you have a combination of Mikey and Toby, at a relatively young age, playing much above their age, if you can surround them with good veterans like Olli [Maatta] and now with Alex, it definitely helps.”

That 922 number is also important from a personal standpoint, in that Edler is approaching the 1,000 regular-season game milestone. At exactly 78 games away, a full and healthy season could get him there in April.

While he isn’t driven by the statistics, or the numbers, Edler understands the significance of this particular mark.

The march to 1,000 beings with game 1 in a Kings jersey, a game which is expected to come on October 14 assuming all goes according to plan. Though he has still yet to make his way to California, that move is on the docket in the near future. Getting to Los Angeles, and finally integrating with his new team, is what Edler is looking forward to most as he approaches the season to come.

“I’m just looking forward to getting into the dressing room with the team, coming to training camp and skating with [everyone],” Edler said. “Playing again, playing in front of fans, and I know both me and my family are excited to move to LA and try the lifestyle down there. Waking up to sunny weather every day and things like that. My whole family is very excited about this move.” 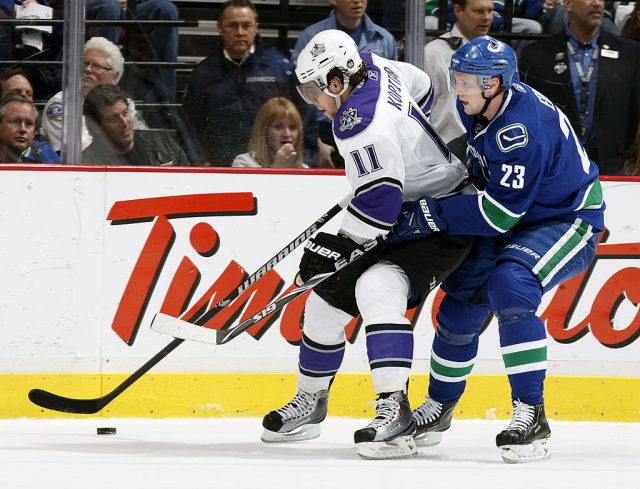 VANCOUVER, CANADA – APRIL 15: Anze Kopitar #11 of the Los Angeles Kings is checked by Alexander Edler #23 of the Vancouver Canucks as he skates up ice in Game One of the Western Conference Quarterfinals during the 2010 Stanley Cup Playoffs at General Motors Place on April 15, 2010 in Vancouver, British Columbia, Canada. Photo by Jeff Vinnick/NHLI via Getty Images)