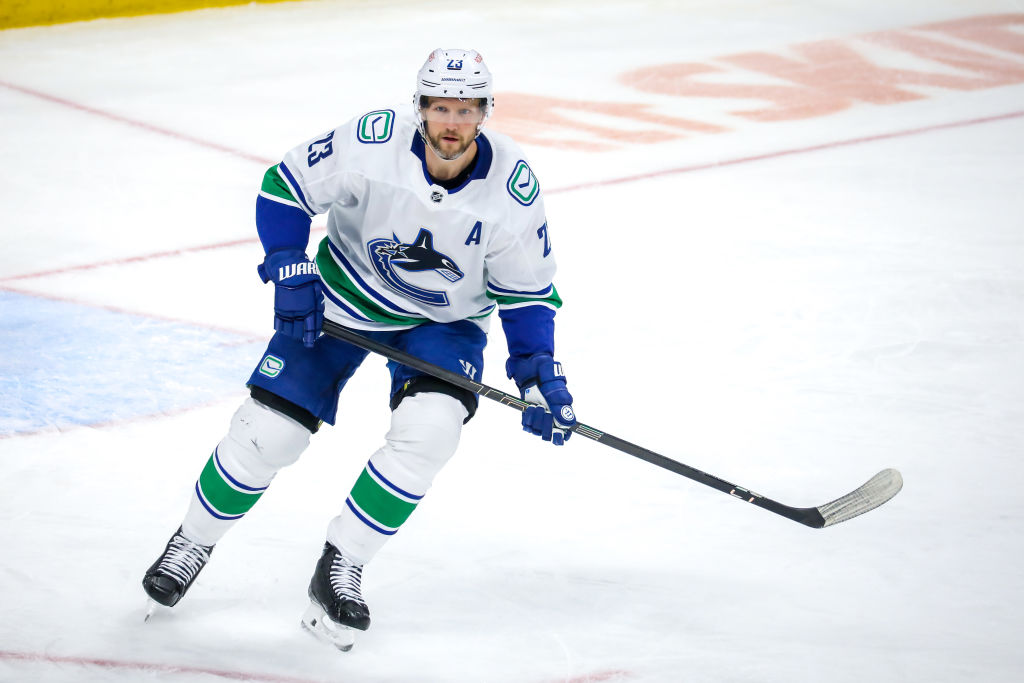 The LA Kings announced today that they have signed defenseman Alex Edler on a one-year contract, with an AAV of $3.5 million.

Edler, 35, has spent his entire NHL career to date – 925 games worth to be exact – with the Vancouver Canucks. A part of the team’s run to the cup finals in 2011, Edler is the organization’s all-time leader in goals (99), assists (310) and points (409) by a defenseman, with his assist and point totals ranking him in the Top 10 all-time amongst Canucks of all positions.

Though he tallied just eight assists during a topsy-turvy season for the entire Vancouver organization, Edler collected at least 30 points in each of the three seasons prior, and eight times throughout his professional career. The veteran rearguard logged nearly 21 minutes last season, and has averaged over 20 minutes in each full NHL season he’s played.

Possessionally speaking, Edler has never posted gaudy totals, though at least some of that can also be attributed to the role he’s played with the Canucks, logging minutes against the opposition’s top players in most situations. On last season’s Vancouver team, which was low on the possession scale overall, Edler was the team’s best defenseman with regards to high-danger chances, with the fewest conceded per 60 minutes amongst all team blueliners. This jives well with his expected goals allowed, with no Canucks blueliner better in that metric. Bend, but don’t break, defensively, and an ability to do it in an enhanced role.

The Ostersund, Sweden native adds a veteran presence to the Kings backend, that consists of four players potentially expected to slot in as regulars with two or fewer full seasons of NHL experience. Drew Doughty obviously speaks for himself, while Olli Maatta also has that veteran status, despite still being just 26-years-old, hardly over the hill. Adding in Edler is a solid move to put some experience into that group, on a team that has seen several veterans depart over the last three seasons.

With such a short term on the contract, Edler represents essentially zero risks for the organization. With Mikey Anderson and Tobias Bjornfot coming off of their first seasons at the NHL level, Edler joins Olli Maatta as more experienced hands on the left side of the blueline. Edler was an alternate captain in Vancouver for five seasons, and can lend some of that leadership and experience to Anderson and Bjornfot. The Kings currently have seven defensemen expected to play in the NHL this season, giving them plenty of options, and flexibility, as they approach training camp.

Thomas Drance, who covers the Canucks for The Athletic, noted that Edler’s footspeed isn’t what it was earlier in his career, but no Vancouver defenseman logged tougher assignments this season than Edler, nor was a defensemen relied upon more heavily in shorthanded and difficult situations.

“Even at age 35, there’s no defender that the club trusted more to handle penalty killing duties or the tough matchups,” Drance wrote earlier this summer.

Edler was offered a new contract by Vancouver, meaning that this wasn’t a situation of the organization not wanting him back. Despite his advanced age, Edler was still valued in Vancouver, though Drance reported that he himself was looking for a new situation. Joining the Kings provides that, on a low-risk deal for the organization, that provides Edler with a financial commitment this season.

Rob Blake on the decision to sign Edler
If you look at Mikey Anderson and Toby Bjornfot, along with Olli Maatta, last year, two really young defensemen coming in and playing big minutes, playing alongside Drew, playing against tough competition every night. In Alex Edler, we get a very solid veteran, who’s capable of playing minutes, he plays a heavier style and has played against top lines throughout his career. Really stabilizes that left side, in the amount of minutes and the quality of opponents he can play against.

Rob Blake on Edler’s game, and how he’s evolved his game as he’s gotten older
He’s just a real solid defenseman. First and foremost, he’s a quality teammate. Anything we’ve heard since it’s come out that we’ve agreed to terms has all been about the quality, the type of teammate, the type of professional you’re going to get every day. He played big minutes in Vancouver, against tough competition, he’s always been very steady, very reliable. When you have a combination of Mikey and Toby, at a relatively young age, playing much above their age, if you can surround them with good veterans like Olli and now with Alex, it definitely helps. 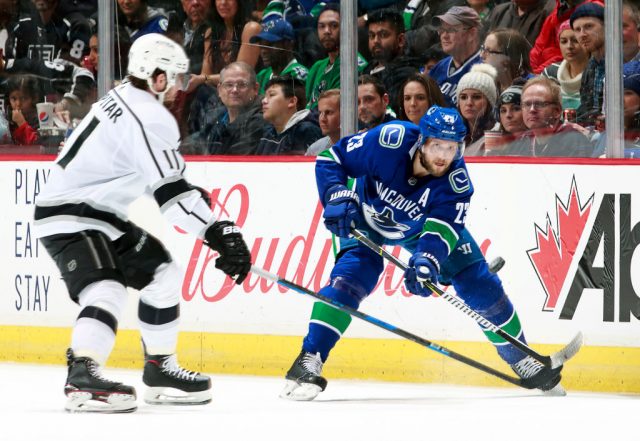 VANCOUVER, BC – DECEMBER 30: Anze Kopitar #11 of the Los Angeles Kings looks on as Alexander Edler #23 of the Vancouver Canucks passes the puck up ice during their NHL game at Rogers Arena December 30, 2017 in Vancouver, British Columbia, Canada. (Photo by Jeff Vinnick/NHLI via Getty Images)” 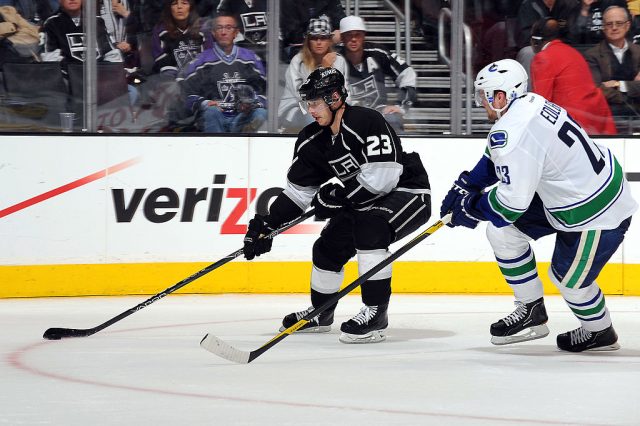 LOS ANGELES, CA – APRIL 18: Dustin Brown #23 of the Los Angeles Kings skates with the puck against Alexander Edler #23 of the Vancouver Canucks in Game Four of the Western Conference Quarterfinals during the 2012 NHL Stanley Cup Playoffs at Staples Center on April 18, 2012 in Los Angeles, California. (Photo by Andrew D. Bernstein/NHLI via Getty Images) 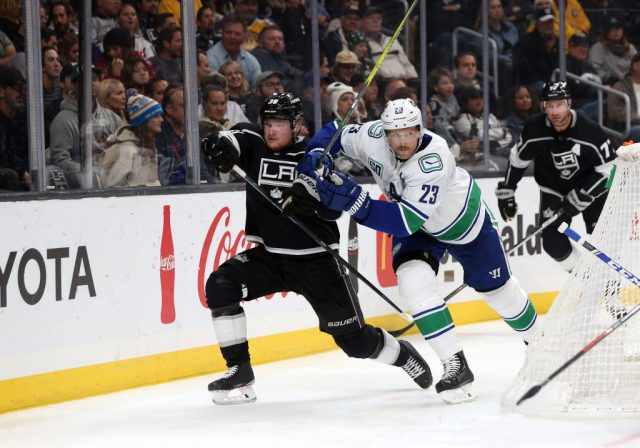