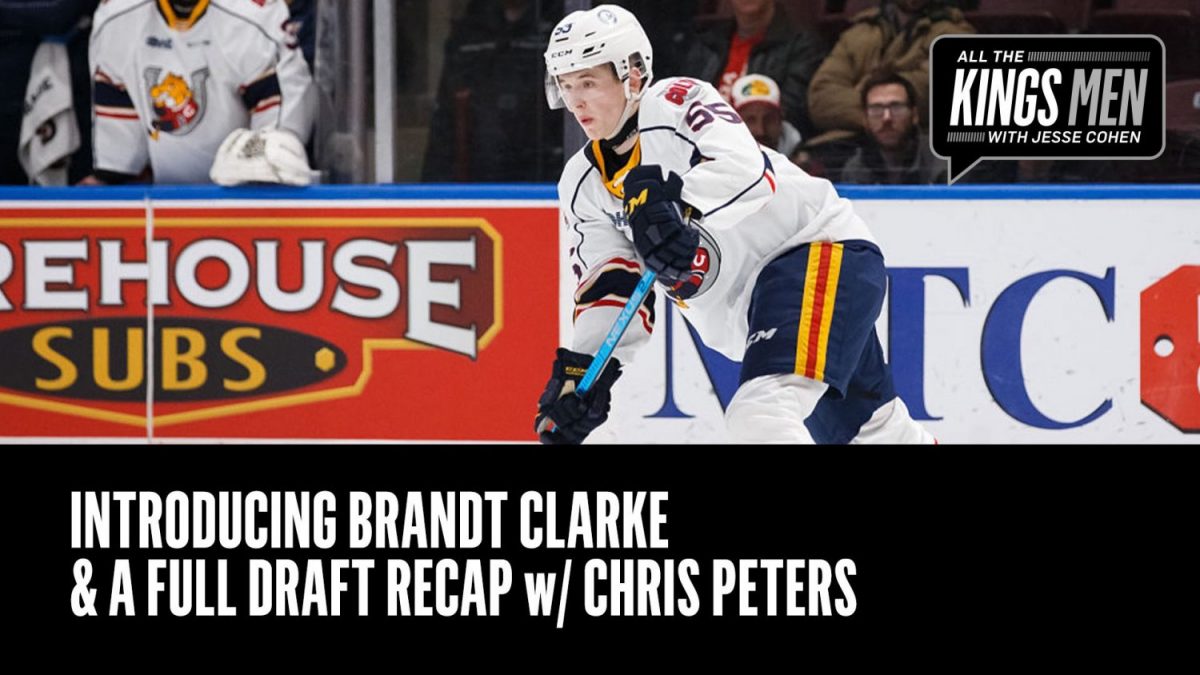 Brandt Clarke joins Jesse Cohen and Jack Jablonski after being selected 8th overall by the LA Kings in the 2021 NHL Entry Draft. Following that conversation, Chris Peters joins Cohen to talk about the full complement of draft picks selected by the Kings in this year’s draft. Peters gives his thoughts on all four players, where they were selected and how they fit into the Kings heralded prospect pool.

The organization’s newest first-round pick, Clarke, addressed external comparisons to Drew Doughty and why he doesn’t feel that young players should be compared to future Hall of Famers, the hockey lineage with his family through his brother Graeme, the maturity and independence he learned from his time playing professionally in Slovakia this past season and his thoughts on Quinton Byfield, who he played against several times throughout his OHL career.

Clarke on what makes him a unique player
I feel like what I bring to the table is that I’m a very poised player, I make smart decisions every single time. I always have my head up, I get shots through from the point – something that Drew does very well as well, so maybe that’s where you see the comparisons. I just feel like I’m a really steady guy who is always in the right spots, always shutting guys down, never letting second-chance opportunities on our goalie, tying up sticks in front of the net. I feel like I’m just a well-rounded player, I’m good with the puck on my stick and I’m good at recognizing where the other team is trying to attack from and I try to shut that down.

On what he’s learned as a player from his brother, a forward
He’s been great for me my entire life, even going back to when we were super young. When he would have scrimmages with his friends he would always bring me out and that would push me, I didn’t want to slow the game down, be the kid who’s two years younger who’s ruining the pace of play. That pushed my intensity to keep up with these guys. Going back to then, he’s always been with me every step of the way. [At] the OHL Draft, he was a high pick there, I was a high pick there, he showed me the ropes and now going into the NHL Draft, maybe I did go a bit higher than he did, but he still endured that process and it’s just something that he’s been there with me for my entire life. He’s told me what to say, told me to speak from the heart, be positive all the time, he’s been huge for me.

On playing against Quinton Byfield in the OHL, and the prospect of now being teammates
I played against [him] eight times when I was in Barrie, and went 0-for-8, so that’s definitely somebody I’m [looking forward to playing with]. It’s definitely something he’s going to let me know about, and there were many highlights he had that were against us too, so it’s going to be nice that when he does something nice out there, that I actually get to cheer for it. That’s going to be a nice change. He’s a special player and it’ll be nice to be lined up with him.

Hear the rest of Clarke’s exclusive interview, along with Peters’ analysis, on the podcast!