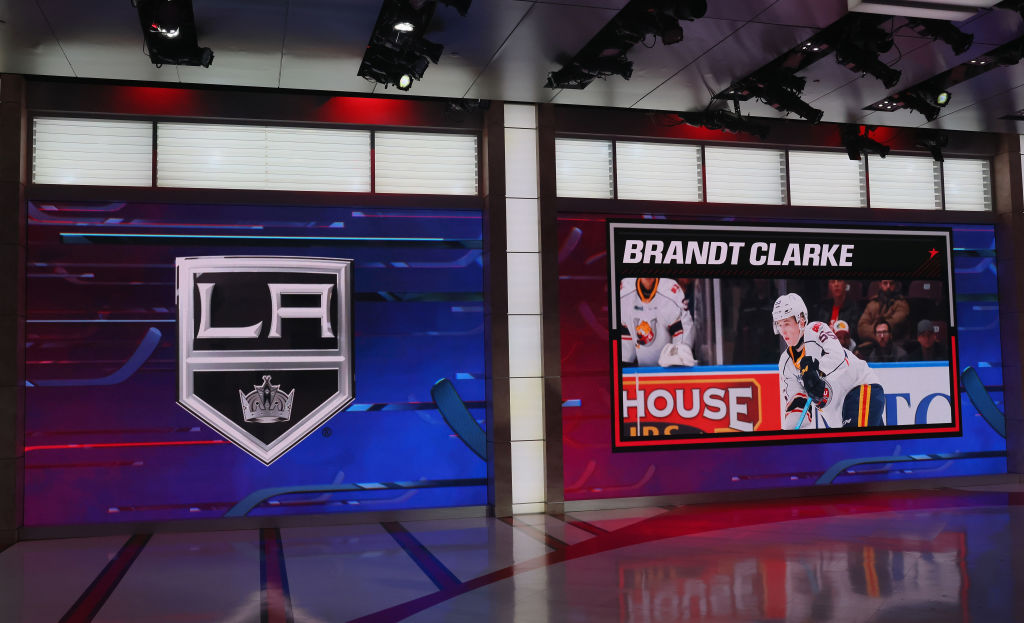 The LA Kings have selected defenseman Brandt Clarke with the eighth-overall pick in the 2021 NHL Draft!

Via The Athletic’s Corey Pronman
Clarke went to Slovakia because there was no OHL season and was quite good. He is a dynamic player with the puck because of his puck skills and playmaking ability. He has the poise and vision to make tough plays from both ends of the rink. He can beat opponents with his skill consistently and looks unique with the puck on his stick, with true first power-play unit potential in the NHL. The concern on Clarke is his skating as he’s a somewhat knock-kneed skater without great quickness. He defends well in junior due to his sense and having decent reach, but the pace will be a concern in that regard as he advances levels. In a sentence, Clarke projects as a second or third defenseman who can be on a top NHL power-play unit but may not be able to face top opponents defensively.

Via ESPN’s Victoria Matiash
A brilliant offensive defenseman, Clarke often serves as a bonus forward on the ice. A skilled puck-mover with a right-handed shot, he’s built to run a power play — which he’s already done at the pro level in Slovakia, where he was loaned this past season. Patient and perpetually calm, Clarke anticipates play well and adapts quickly. His skating remains a work-in-progress — particularly backwards — and his defensive play could use some refining, but this offense-minded blueliner is likely bound to fill a top-pairing NHL role in the not-too-far future.

What His GM Said – Rob Stewart, Barrie Colts (via Scott Wheeler, The Athletic)
He’s not your typical smooth, flow-y skater, but I think that lends to the deception that he plays with. I think that at times, opponents will think they’ve got him in a spot where they can check him, and he seems to find a way to get out of it. I don’t see it as as big of an issue as what some people do.

On his reaction when originally drafted by the Kings
It was crazy. You sat there, see the picks go by, some people I knew, it was a pretty cool experience. I have a really good support system, a lot of people off camera that you didn’t see, but a lot of people there supporting me. They came all this way, from out of town, to support me, it was amazing. That feeling when it finally happened was raw emotion and I was just really excited. This is the best day of my life.

On how much communication he had with the Kings in the draft process, and if he had any kind of hunch he might be selected by LA
I did yeah, I talked with them a good amount of times and they really liked me. We did some video too, I broke down some plays for them, they wanted to see what I saw in situations, it was cool. I’m really happy that I got to talk to them that much and I was just really happy. They were great to me in the entire interview process and I’m ecstatic to be an LA King.

On hearing his style of play compared to Drew Doughty
I don’t know, Drew is one of the most complete players in the NHL, has been for many seasons, multiple-time Stanley Cup Champion and I’m not an established person yet. I don’t want to say that, set those expectations, he’s a Hall of Famer and I have the utmost respect for that guy. I don’t like when people jump the gun and say huge comparisons that they’re going to be these NHL legends, because that’s just not realistic. I have the utmost respect for him and I hope I get to learn from him.

On what he learned about himself when playing in Slovakia this season
I had to do a lot of off-ice growing up. I was away from my family, halfway across the world, and my brother was with me for a bit but then he had to take off. I had to do my own grocery shopping, do my own cooking, be responsible to go to bed at the right time, wake up at the right time, stuff like that. I just matured as a person and I think it was really beneficial for me. The team was great, I have nothing but great things to say about Nove Zamky, I’m honored to represent them, and I’m grateful that I had the opportunity to play professional hockey this season when a lot of people couldn’t play hockey at all.

On his style of play and his “offensive mindset”
I feel like I am a very creative player, I’m patient with the puck. I feel like I make the right decision every single time and that’s something I pride myself on. I don’t want to be the last line of defense a lot, you can’t make mistakes or it winds up in the back of your net more often than not. I pride myself on getting pucks up quick, I pride myself on making good first passes, but I do have that creative asset. I can throw those fakes in to throw forwards off sometimes, or throw those fakes in to get shots through from the point. I feel like that’s just something I’m good at, like I said I’m poised and patient with the puck, I think those are some of my best attributes and something I hope to prove to LA Kings fans sometime soon.

On the strides he feels he needs to take to transition into an NHL player
I feel like I need to just put on more weight, be stronger, be more explosive, that’s all stuff that I know I have to do. Situations when maybe it’s a 2-on-2, guys chip the puck around me, I can be more explosive with those first two steps, get to the puck in the corner and make a good breakout pass, instead of having the guy right on me. I feel like stuff like that can help with my well-rounded game.

From the LA Kings Official Release –

Clarke, 18, registered 15 points (5-10=15) and a plus-6 rating in 26 games last season with the HC Nove Zamky in Slovakia. Prior to playing overseas due to the COVID-19 pandemic, he played with the Barrie Colts of the Ontario Hockey League.

The 6-2, 190-pound defenseman posted 38 points (6-32=38) in 57 games during his rookie season with Barrie in 2019-20. He led all rookie defensemen in points and assists and finished second in goals. He ranked fourth on the Colts in points and second in assists, leading team-defensemen in both categories.

The Ottawa, Ontario native has represented Canada twice, most recently at the 2021 IIHF U18 World Junior Championship where he tallied seven points (2-5=7) and a plus-12 rating, helping lead Canada to the gold medal. He also competed at the 2020 World Under-17 Hockey Challenge, posting six points (1-5=6) in five games.

Quick Take – Once we hear from General Manager Rob Blake later on this evening, I think he will be happy with how the first round shook out from a Kings perspective, with the team knowing by Pick 6 that they would have a chance at either William Eklund or Brandt Clarke.

Clarke was considered to be one of the top four defensemen available in the draft, typically ranked second, third or fourth depending on which list you went off of. Certainly a nice add for the Kings at 8, with an offensive-minded blueliner joining an already stacked prospect pool.