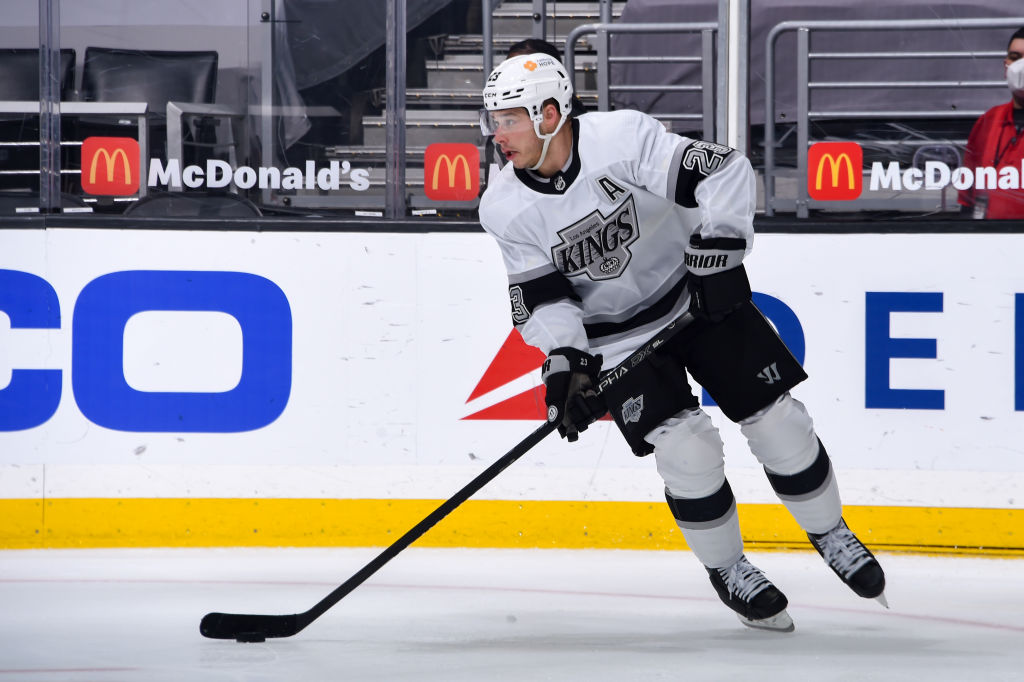 With the left side of the forwards now in the books, we move on over to the right wing, with a look at the most veteran member of the Kings roster in Dustin Brown.

Brown had a nice year, leading the Kings in goals and during the first half of the season, ranking amongst the division leaders in goals scored. Brown was nagged by injuries in the second half of the season, missing a couple of games, though he was generally able to push through until he was eventually shut down for the team’s final five games in early-May with an upper-body injury.

Brown’s value to the Kings goes beyond the numbers, but the numbers weren’t too shabby either. As a veteran player and a natural leader in the room, Brown remains an important figure for the role he plays as a person. As a player, he posted some of the team’s top numbers both in terms of raw production, as well as possession metrics. Brown’s play this season impressed his head coach, who feels Brown has been able to not only adjust to an evolving style of play in the NHL, but succeed in doing it.

“You can see why he’s had such a great career,” Todd McLellan said of Brown. “He’s competitive, he’s been able to adapt and change and I think that’s one of the biggest things for an individual that’s played that long, understanding how the game is played, study it a little bit and figure out how you’re going to be effective in the game. Accept change, and our group as a whole has done that, it starts with the five veterans that we have and it works its way down. There’s no one more senior than Brownie, and he’s getting rewarded for some of the things he’s doing well right now.”

Trending Up – Dustin Brown led the LA Kings in goals this season. Open, shut, close the book, that’s good. Whether you look at raw totals, with Brown’s 17 tallies topping the charts, or on a per/60 basis, with Brown’s 1.18 far and away ahead of his teammates, Brown put the puck in the net more regularly than anyone else on the Kings.

Brown was also one of the NHL’s best goalscorers on the power play this season. Among players with at least 100 minutes of power-play time, Brown ranked eighth in the NHL with 3.66 goals per 60 minutes. His goals also came, mostly, from high-danger areas and he was one of the NHL’s best at generating high-danger opportunities. Brown ranked well outside the NHL’s Top 100 in total shot attempts on the power play, but was 12th in high-danger chances for. Brown got to the dirty areas on the man advantage and was a big reason the Kings had such an effective power play in the first half of the season.

Brown’s possession metrics led the Kings in Corsi, scoring chances and high-danger chances, posting rates between +3.9 and +6.0 percent relative to his teammates. When on a line with Anze Kopitar and Alex Iafallo, the team’s usual top line this season, all three players posted a CF% of nearly 56%, but below 50 when playing without the others. With a scoring chance percentage of nearly 53%, and high-danger chances over 55%, Brown’s possession metrics were excellent both on that line and in total individually.

While not something you can measure, Brown’s leadership abilities in the room, with a young group around him, have continued to be important. A long-time leader for the organization, Brown’s ability to work with younger players has been lauded, and it’s something he’s taken pride in. Once Jeff Carter was traded to Pittsburgh, Brown wore a letter through the end of his season, with McLellan calling him a “tremendous leader.”

Trending Down – These trending down sections do seem to have a common theme amongst players who had a good season overall, and that’s the closing stretch. Brown scored 13 goals from his first 24 games, and 4 goals from his final 25, with seven of his nine power-play goals coming in the first half.

For Brown, it’d be unfair to say that injuries likely did not play a part in that. He missed two games in late-March due to injury, as well as the final five with an upper-body injury. When he was shutdown, it was noted that Brown suffered the injury earlier in the season, something that McLellan confirmed.

“It [had] been going on for a little while, he’s a pretty tough character, he’s played through a fair amount,” Todd McLellan said of Brown this morning. “It [didn’t] quite heal, it [kept] reappearing, it just [wasn’t] good for him to keep going right now. He’ll get the treatment he needs and he’ll be back, ready to go.”

2021-22 Status – Brown enters into the final season of the eight-year contract he signed back in July of 2013. Brown’s production level, while healthy, still shows he has something to give, and leading the team in goals is a good indicator of Brown’s value.

Where exactly he slots in this coming season remains to be seen. The addition of Viktor Arvidsson gives the Kings another offensively talented right winger. Brown has shown chemistry with Gabriel Vilardi, as well as the obvious fit with Anze Kopitar and a pairing with a young Quinton Byfield doesn’t sound like the worst idea either.

Brown’s role this coming season will be an important one, regardless of exactly which line he slots in on, with his contributions both on and off the ice continuing to be valuable to the Kings.

By Zach Dooley
69 Comments
Behind the Scenes