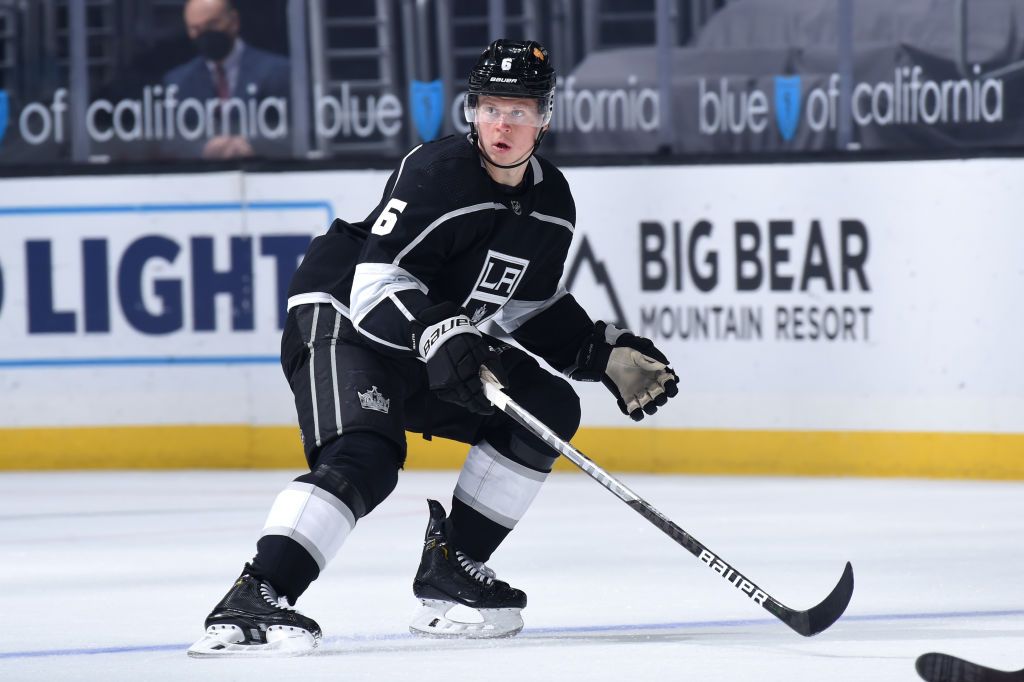 With the young bucks out of the way, we now move onto the veterans of the left side of the Kings backend, starting with defenseman Olli Maatta.

In many ways, Maatta was the biggest offseason acquisition the Kings made, as he joined the team via trade in exchange for forward prospect Brad Morrison. Maatta became a cap casualty in Chicago, and the Kings acquired the two-time Stanley Cup champion at a cut-rate price.

As accomplished as Maatta’s career has already been, it’s hard at times to remember he’s only 26 years old, far from the twilight of his career. While he was penciled into the wrong role to start his first season as a member of the Kings organization, he became a quiet yet effective defenseman for the Kings as the months ticked away, typically as a part of the third defensive pairing.

Expectations were extremely high for Maatta entering the season, with a lot of buzz around a potential pairing with Drew Doughty. Both players were excited about it, coaches were excited about it, but over the first four games of the season, for whatever reason, it wasn’t successful. After a few games as a healthy scratch, Maatta returned to the lineup to much more success, playing in a new role.

Maatta partnered predominantly with Sean Walker on an effective third pairing, and once he found the role with the Kings that was the proper fit, Maatta got back to playing effective hockey.

Trending Up – This is a re-hash from Sean Walker’s season in review, but it should be repeated – Maatta/Walker were an effective third pairing.

“In a lot of ways, Walker and left-shot blueliner Olli Maatta, his most common partner this season, formed an effective pairing, especially as a third pair. The Walker/Maatta duo placed above the 50 percent line in Corsi and high-danger chances, and were above the team average in both categories, plus scoring chances. In terms of strictly creating, no regular pairing created more attempts on a per-60 minute basis than the Walker/Maatta pairing did.”

What is interesting is that while the Maatta / Walker pairing ranked highly in chances created, Maatta was a safe, low-event player on his own. Maatta ranked in the Top 3 amongst Kings defensemen in shot attempts, scoring chances and high-danger chances against per 60 minutes, ranking behind only Doughty and Mikey Anderson in any one particular category. He did all of this while starting more frequently in the defensive zone than any of his fellow blueliners.

In that regard, he proved to be an effective partner for the riskier Walker, providing defensive stability alongside the offensive acumen of his partner, something that was echoed by Assistant Coach Trent Yawney, in a recent interview with Lisa Dillman of The Athletic.

“Over the course of the year, I thought he fit in and when he was comfortable, he’s a very good player and was good with (Walker). As time went on, I started to figure out that he’s hard on himself, sometimes to his detriment. But when he’s playing the way he likes to play, he’s very effective.”

Maatta’s character was also praised by coaches throughout the season. Yawney called Maatta an “unbelievable human being”, while McLellan referred to him as an “outstanding human being”. McLellan pointed to the type of person that Maatta is, his track record in the league, as big reasons for his bounce-back effort after a rocky start.

Trending Down – The biggest knock on Maatta is that he didn’t live up to external expectations this season. Whether his fault or not, there was a trendy narrative that Maatta’s addition to the roster would provide Drew Doughty with a steady defensive partner, solidifying the first pairing for the Kings.

While implemented to start the season, the results did not materialize, something that Todd McLellan took responsibility for.

“We have to accept a lot of responsibility for that, we put him in that situation, we built him up. It was the wrong thing in retrospect.”

Without regards to expectations, with Maatta on the ice, the Kings gave up goals at an alarmingly high rate, but a rate that the underlying numbers did not support. Maatta’s goals conceded column is lopsided, when compared to what was expected. The Finnish defenseman had a PDO of just .967, and with possession metrics much closer to the 50% mark, no Kings defenseman saw a bigger disparity between expected goals against and actual goals against.

TLDR – The underlying number suggest a better player on the left side of the third pairing than some of the raw numbers indicate.

2021-22 Status – Maatta enters the final year of his contract, before he would qualify for unrestricted free agency in the summer of 2022. Maatta counts at just over $3 million against the cap next season, and has proven to be, at the least, a solid contributor for the Kings.

Where he finds himself in perhaps a difficult position is the emergence of Mikey Anderson and Tobias Bjornfot, with a desire to keep both young defensemen developing. Maatta has shown though that he can be effective in the correct role and entering the season with a Maatta / Walker pairing should instill some semblance of confidence throughout the eventual group of six defensemen.

By Zach Dooley
10 Comments
Behind the Scenes