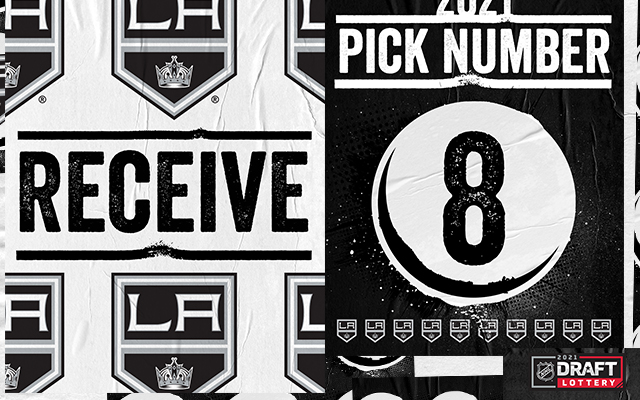 The LA Kings will hold the eighth overall selection in the 2021 NHL Draft, to be held virtually on July 23 and 24.

As a result of tonight’s draft lottery, the first 15 positions in the first round of the 2021 NHL Draft have been selected, listed as follows –

*Note that the Arizona Coyotes were awarded the 11th overall selection from the lottery, but will forfeit their selection.

Participants in the Draft Lottery included all clubs that did not qualify for the Stanley Cup Playoffs and the expansion Seattle Kraken, who begin play in the 2021-22 season. The remaining positions will be determined by the results of the playoffs. The Arizona Coyotes will forfeit their first-round selection, as a result of violating the NHL Combine Testing Policy during the 2019-20 season.

Seattle was the only team to rise in the lottery, moving from a tie for third-best odds to second, while Anaheim fell from second to third. All other percentages held firm. The Kings had a greater than 50 percent chance to select eighth and that turned out to be the case, with just the one change throughout the evening. Last season, the Kings rose from the fourth-best odds to select second overall, with each of the top three selections changing hands during the lottery.

The Kings pick in Rounds 2-7 will be the eighth in each round, which was predetermined, though the organization has traded some of its own draft picks, and acquired others. A full list of draft selections is shown below –

2021 will be the first time in franchise history that the Kings have selected eighth overall.

Regarding the top-ranked players, per the league’s official release –

Owen Power, a 6’ 6” defenseman from the University of Michigan, places No. 1 among North American Draft prospects in rankings released last week by the NHL Central Scouting Bureau. Rounding out the top-five North American skaters are No. 2 Mason McTavish, a center for Peterborough of the Ontario Hockey League who played on loan with Olten of the Swiss second division in 2020-21; No. 3 Kent Johnson, a center with the University of Michigan; No. 4 Luke Hughes, a defenseman from Team USA’s Under-18 National Team Development Program and the brother of recent high-end selections Quinn Hughes (No. 7 by VAN in 2018) and Jack Hughes (No. 1 by NJD in 2019); and No. 5 Dylan Guenther, a forward from Edmonton of the Western Hockey League.

With the Kings’ selection now officially locked in, we will take a look at some of the prospects projected to be available in that range as we approach the draft. In a year without a consensus regarding the overall rankings at the top of the draft class, as well as a year in which there is less information available on prospects from certain leagues, it could be a fruitful year to pick towards the backend of the Top 10, with rankings likely to vary between teams.

Much more to come as we approach the eventual day!

Insiders, a bit of schedule news for you, as we approach the three months out mark from training camp and

The LA Kings announced this afternoon that they have signed defenseman Helge Grans to a three-year, entry-level contract. The contract

The LA Kings will hold the eighth overall selection in the 2021 NHL Draft, to be held virtually on July