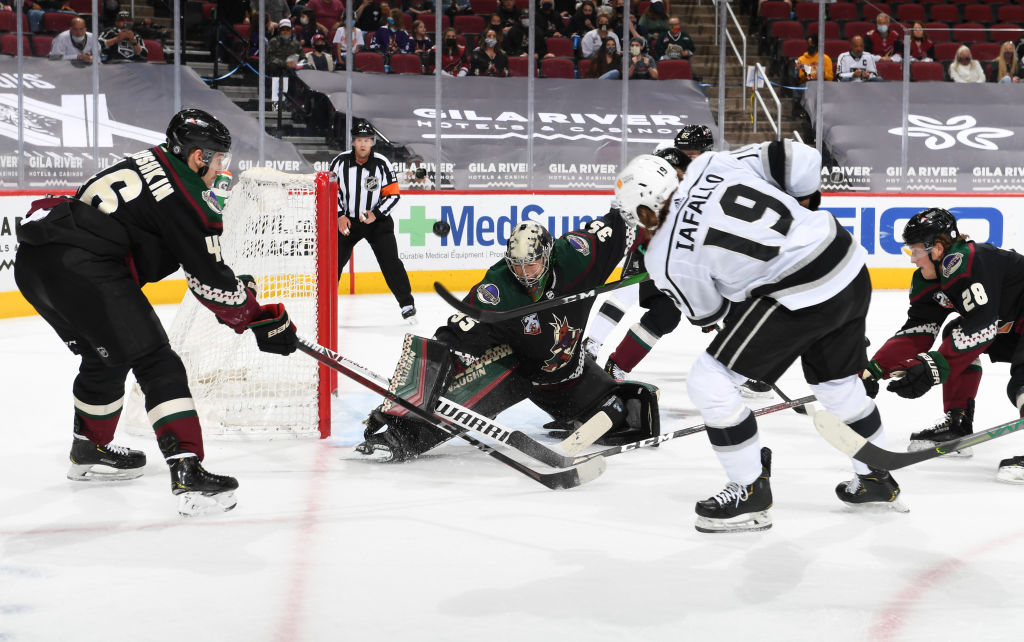 The LA Kings, to a man, bounced back from this weekend’s games against Anaheim with a strong 3-2 victory in Arizona, to begin a two-game set this week in Glendale.

Despite a start to the game that tilted shot attempts in favor of the Kings, it was Arizona that opened the scoring late in the opening period. Lawson Crouse got to a puck in the right-hand corner and sent a no-look pass towards the crease to Christian Dvorak, who deked to his backhand and in for the goal.

The Kings answered right back, however, tying the game less than a minute later. Quinton Byfield won a faceoff in the offensive zone to Trevor Moore, who wristed his shot past Darcy Kuemper for the game-tying goal. Moore reached double digits in goals on the play, with his tenth tally of the season, but Byfield’s originally credited first-career NHL point was eventually changed to an unassisted goal.

The Coyotes also scored first in the second period through defenseman Jakob Chychrun on the man advantage, who wired home a wrist shot from the left-hand circle, off the post and in. The Kings flipped the script, however with two additional goals of their own, to take a one-goal lead into the second intermission.

First, Anze Kopitar tied the game at two, as he buried a 2-on-1 feed from Adrian Kempe. The Swede made the play by using his speed down the right wing, creating the odd-man rush opportunity. The Kings then scored a power-play goal with 6:20 remaining in the second period, as Alex Iafallo got to the front of the net and buried a Drew Doughty rebound to put the visitors on top.

A goaltending change was necessitated to begin the third period, with Jonathan Quick leaving the game with an upper-body injury. Cal Petersen entered in relief and made 15 saves on 15 shots in the final period of the game, to help seal the deal on a 3-2 victory.

As Head Coach Todd McLellan details below, he was happy with the response the team showed tonight after a disappointing weekend against the Ducks.

Hear from Adrian Kempe, Iafallo and McLellan from after tonight’s game.

On his thoughts on the team’s response tonight after the games in Anaheim this weekend
Oh for sure, you could tell everybody had a great game. Up and down the lineup, goalies were awesome, everybody played well and it’s a huge win for us.

On his new line, and his play with Gabe Vilardi
We had a lot of support, great players are making good plays and that just gives us momentum going forward. Our line had a good game and we’ve got to keep that going.

On the first period tonight, and a full sixty-minute effort
I felt like we were moving the puck a little bit faster. You’ve got to hand it to Quickie, he made some big saves, and I feel like everybody was putting their bodies on the line, a lot of blocked shots. Good PK, good power play, and in our zone, just getting the puck out and making quick plays in the d-zone, that really helped us.

On Anze Kopitar, and his approach of the 1,000-point milestone
It’s incredible. Just to be out there with him, for him to be one point away, it’s pretty amazing. It’s just an honor to be able to play with him. He’s a good leader, on and off the ice, and a good friend as well.

On how he liked the team’s response from the games in Anaheim this weekend
To rewind, we were really disappointed leaving Anaheim after that second game, to a man. We didn’t need to say too much, I think the guys felt it and lived it for a day. I was asked about what was important and the response coming up and we had it. We had a real good response tonight, to a man, everyone played real well early in the game, which gave us some confidence. Quickie made some saves early and I thought the first period was as good a period as we’ve played in a long time. Second period, they buckled down a little bit and made it more difficult for us, third period we got some saves and held on. We’ll take the win any way we can get it and happy with the response.

On how Adrian Kempe took advantage of his opportunity, and his fit on the top line
I thought Adrian played one of his better games of the season. I thought he was aggressive all over the rink, set the tone on the forecheck, meshed well with those two. He was as good defensively as he was offensively, and he was pretty good at that end too. Really happy for him tonight.

On the first period tonight, and what he felt the team did well
I thought we were aggressive early, we tried to take the game to them, rather than receiving it. When we forechecked, we had five players involved in it instead of three, we were able to stay ahead of them in line changes, we were the fresh five instead of the tired five, which makes a big difference for our team. We were just aggressive. It didn’t cost us defensively at all, which was nice to see our team play that way.

On Alex Iafallo’s game tonight, after swapping spots with Kempe
They flipped positions and I thought they both played really well. Al’s been snakebit a little bit, hasn’t been on the scoresheet, to get the winner on the power play, which hasn’t been performing as well as we would like, was a nice sign for him and for us. Good for both of them.

– Forward Anze Kopitar collected points number 998 and 999 in his NHL career with a goal and an assist in the second period.
– Forward Trevor Moore scored his tenth goal of the season, the sixth Kings player to reach double figures in goals this season. Moore now has seven points (5-2-7) over his last nine games played.
– With the primary assist on Kopitar’s goal, forward Adrian Kempe collected an assist for the second straight game. Kempe has five points (1-4-5) over his last five games played.
– Forward Alex Iafallo snapped an eight-game scoreless run with his second-period tally.
– Jonathan Quick left tonight’s game with an upper-body injury after 40 minutes. Quick made 17 saves on 19 shots in the first two periods and earned the victory.
– In relief, Cal Petersen stopped all 15 Arizona shots he faced in the third period.

The Kings are scheduled to return to practice tomorrow afternoon at 2 PM at Gila River Arena.