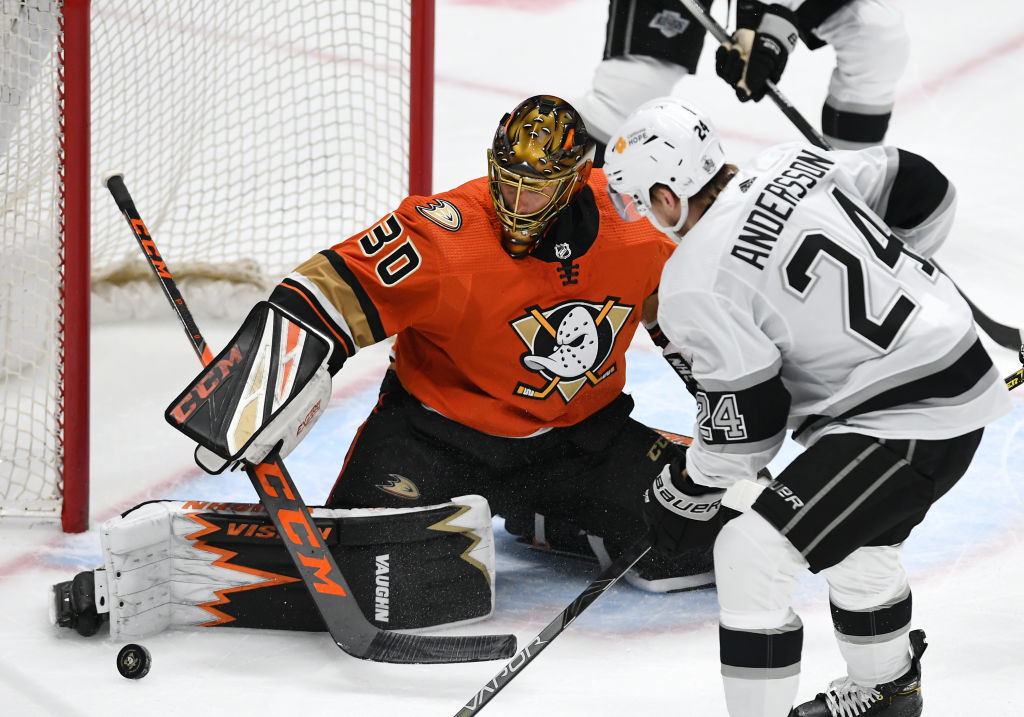 Entering Wednesday evening, the Kings were six points behind the St. Louis Blues for the final playoff spot in the West Division. Then St. Louis overturned a two-goal deficit and won. After a Kings loss later on that night against Anaheim, St. Louis won again on Thursday and suddenly six points became ten.

The Kings were never playoff favorites at any stage this week but the glimmer of hope that came from entering a four-game stretch against Anaheim seemed to have all but faded entering Friday’s game at Honda Center.

The Ducks were the better team for the majority of the 120 minutes this weekend, with Jonathan Quick’s stellar effort and a pair of timely goals late on Friday the difference between Anaheim collecting four points, and the season series, and the Kings getting a split at Honda Center, and a narrow points advantage on the season. As Todd McLellan spelled out after Saturday’s lopsided, 6-2 defeat, there was an overall letdown from the group with how things have played out recently, especially the 48 hours leading into Friday’s game.

The Kings as a whole, individuals outstanding, didn’t have that tenacity level you’d expect from a rivalry game, as perhaps the overall situation set in this weekend. Starting the week, you could map out a path to the postseason, with four straight games coming up against Anaheim, regardless of how realistic you felt actually qualifying was. In a way, it’s human nature to see a let up in that situation. But that doesn’t mean that the final games of the season should just be thrown away, either.

Now, with just seven games remaining, the Kings are faced with a series of closing games that boil down to evaluation of players, and how individuals perform when the postseason is out of reach. The games against Anaheim didn’t have that, in the words of the team’s bench boss.

“Let’s move on, we know what it is, it’s real and pick ourselves up,” McLellan said. “We can’t feel sorry for ourselves, that’s where we’re at right now, and play. There isn’t an athlete that can win when they’re not all in. It just doesn’t matter, their performance will never be good enough if you’re not all in and that’s where we were at tonight.”

After Friday night’s game, McLellan discussed the ongoing evaluation that management, coaches and the players themselves are conducting. These are important games for individuals in the evaluation process. McLellan highlighted certain players on the team as showing that they want more, and they’re ready for more, but also left even the 2-1 victory disappointed in the performances of some others.

For those who have been with the Kings all season, the final seven games fit into a larger scale evaluation throughout the course of the season. Now, with the stakes in terms of a playoff push lower, it comes in different ways.

“The intangibles come into play right now,” McLellan said. “Are you willing to get into a lane and block a shot now, are you willing to take a hit to get the puck out, can you shorten your shift up so your teammates have a better chance at success, are you willing to come back as hard as you go in…I could go on and on and on. A lot of it is the intangibles, the character stuff that we’re looking at. If you lack it, or you give it back, it’s going to show up quickly.”

With that evaluation will come opportunities for younger players to try and cement their own roles moving forward. Behind Anze Kopitar, the lineup in both games this weekend featured three centers with less than 100 combined NHL games. All four centers were within a minute and 20 seconds of each other in total time on ice on Saturday. Players like Quinton Byfield, Gabriel Vilardi and Jaret Anderson-Dolan, those considered to be the future at the center position, have a continued opportunity to earn a role.

While the plan is not for Byfield to finish the season with the Kings, his next three games are important as he looks to earn a full-time role in the fall. For Vilardi and Anderson-Dolan, who have been moved around between the second, third and fourth lines all season, where do they slot in moving forward, and can an impactful finish set the stage for a better picture heading into next season? There’s also the question of which player might earn the season’s final recall from the Ontario Reign, which adds another face, likely at forward, into that mix.

A center by trade, Lias Andersson played a season-high 15:02 on Vilardi’s wing on Saturday. Since he was reinserted into the lineup on Wednesday, the Kings have lost the Corsi battle in all three games Andersson has played, but Andersson himself was even or a positive each time out. Over that span, no Kings player had more individual scoring chances for (7) or high-danger chances for (5) than Andersson. These final games are important for a player like Andersson, who has shown offensive upside and is continuing to improve his 200-foot game.

The games this week were perhaps a harsh reality of where the Kings are in the process – six wins from 16 games played against Anaheim and San Jose just aren’t enough to be a playoff contender. Perhaps it was more symbolic, after eight wins from the last 24 games played. At the end of the day, the Kings did set themselves up to make a run at the postseason, but didn’t build on a promising first half of the season.

Regardless though, the seven games remaining are not meaningless, for individuals or for the team as a group. While recency bias from seven games shouldn’t change how a player’s entire season is analyzed, enjoy the chance to see where certain players on this team might fit in heading into the bigger picture for next season, while continuing to identify the holes that exist and how they might be filled both internally and externally heading into the offseason.