After a unique season, Quinton Byfield fitting right in after NHL debut 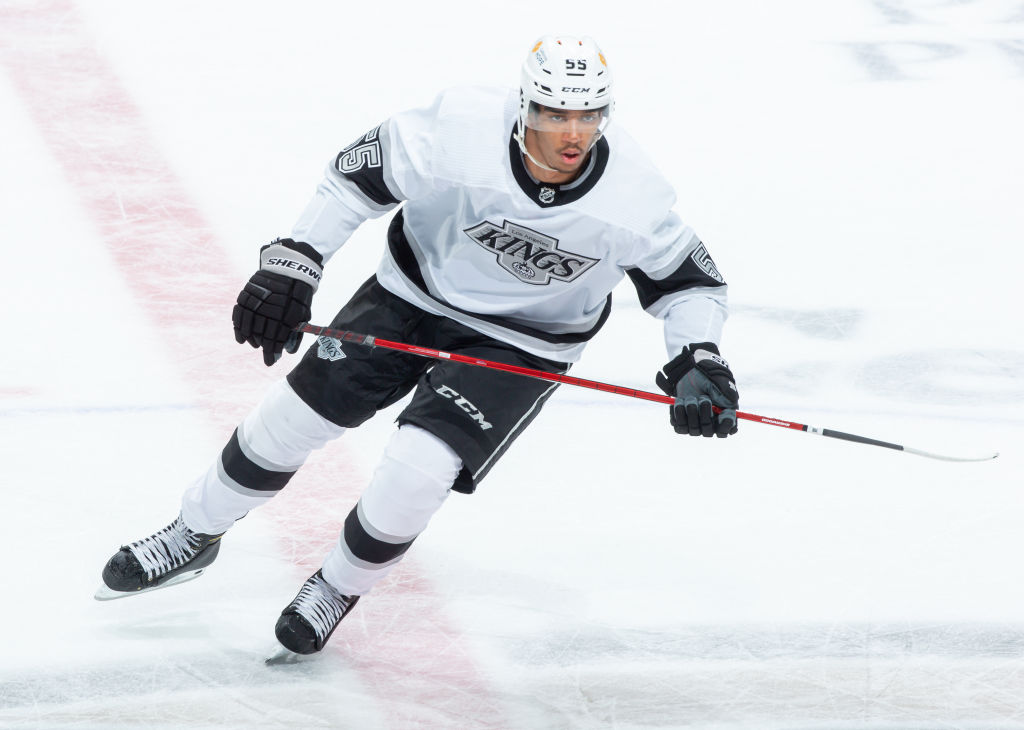 No matter what you do, where you go, or how you play, the expectations around any player selected in that position are extremely high. That is certainly the case with Quinton Byfield, regardless of the patience shown within the organization this season.

Byfield’s debut this season carried a lot of interest throughout the Kings fanbase, and with three games now under his belt, Kings fans are getting a small glimpse of the highest-drafted Kings player since 2008.

The excitement was evident from everyone, including the player himself heading into his NHL debut. It’s something he’s naturally looked forward to for his entire life, and when the moment finally arrived, it was naturally an incredible one for the young man from Newmarket, Ontario.

“It was definitely a very exciting day,” Byfield said, following his debut. “I wish I could have shared that moment with my family, but I know they’re super proud of me, they were texting me all day, giving me calls, all of my friends reaching out as well. I knew I had a lot of support behind me and I just wanted to go in with confidence.”

Byfield has shown well thus far in his first three games with the Kings. As a team, the Kings weren’t at their best in any of the three games he played this week against Anaheim, though on a team that was outplayed, the Kings were relatively even, or slightly better, in terms of puck possession with Byfield on the ice. 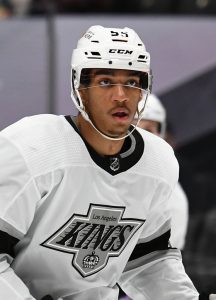 ANAHEIM, CA – MAY 01: Los Angeles Kings center Quinton Byfield (55) on the ice during a game against the Anaheim Ducks played on May 1, 2021 at the Honda Center in Anaheim, CA. (Photo by John Cordes/Icon Sportswire via Getty Images)

Though the metrics show a disparity in high-danger chances, you could say that Byfield had 2-3 high-quality looks in his debut alone, though they weren’t classified as such. The youngest member of the Kings set himself, and teammates, up for chances in all three games in a variety of different ways.

“I thought he contributed to a lot of offensive chances, he was good in the circle, he had a pretty good idea and understanding of the structure and how we wanted to play,” Todd McLellan said of Byfield, after his debut. “Overall, definitely a passing grade for him, he was probably one of our better players.”

While the excitement is undoubted, and Byfield’s play on the ice through three games has had plenty of positives that stuck out, the road to his debut has been anything but conventional for an 18-year-old.

For starters, the expectation heading into this season was that Byfield would either play with the Kings, in the NHL, or for Sudbury in the OHL. The COVID-impacted season opened up a welcomed door number three, with Byfield able to play for the AHL’s Ontario Reign, with the OHL season postponed and eventually cancelled.

While an extremely unfortunate reality for those in the Ontario Hockey League, from a selfish perspective for the Kings organization, the situation allowed for both players to develop under the watchful eye of the Kings management team, skating in the same practice facility this season as the big club. Byfield was nearly a two-points-per-game player last season with Sudbury, while no player has scored more OHL goals than Kaliyev since 2017.

“For us, it has been such a positive to have those two players here with us,” LA Kings Director of Player Personnel Nelson Emerson said. “The fact that we have them in our organization, being that age and being able to play pro hockey, it’s just added to their development. For us, we take it as a positive, we’re real fortunate and I think we’re taking advantage of the situation too.”

For Byfield, the AHL was exactly the place for him, as a player who has proven he can dominate at the junior level but needed some time to adjust to the professional game. 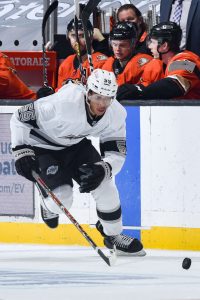 LOS ANGELES, CA – APRIL 28: Quinton Byfield #55 of the Los Angeles Kings skates with the puck during the third period against the Anaheim Ducks at STAPLES Center on April 28, 2021 in Los Angeles, California. (Photo by Juan Ocampo/NHLI via Getty Images)

Byfield was able to grow as a part of several younger players on this season’s Ontario Reign roster. Ontario has dressed 18 players for at least one game this season born in 1998 or earlier, and their top five leading scorers were born in 2000 or earlier. Growing, and developing, with his peers was helpful for Byfield to learn and become comfortable as a professional.

“I think he’s understood and begun to adapt to the pro game, at the American League level,” McLellan said earlier in the week. “He’s become more responsible defensively, understands the pace of play and how quickly he has to make decisions and distribute pucks.”

In the AHL, Byfield trailed only Kaliyev in terms of total points at the time he was reassigned from the Reign to the taxi squad and was inside the league’s Top-10 in points by a rookie player, doing so at a younger age than most. It was clear, as the season progressed, that Byfield made natural progression as he not only developed individually but felt more comfortable with the jump in the level of play from the OHL to the AHL.

From March 13 through March 26, the Reign played seven games and Byfield had at least one point in each of them. Over his final 12 AHL games, Byfield was +9, after the minuses accumulated at the beginning of the season.

“I think, when we first started off with QB, he was finding his route in the pro game, finding his timing, the detailed things like being a little bit heavier in battles, one hand on the stick in battles as opposed to when he needed two, all these things still need work,” Ontario Reign Head Coach John Wroblewski said. “He’s going to need to keep figuring them out, but the learning curve has gone from a guy that struggled the point, his plus minus was down there among the worst in the league, right at the bottom. Now he’s just, to me, he’s just a dominant player at this point. I loved his [most recent game with the Reign] and I’ve liked it for awhile now.”

The jump from the AHL to the NHL was the next step in the process, but that jump probably felt like more than one. Though the AHL is, in the minds of many, the second-best league in the world, there’s still a difference between it and the best league on the planet, featuring the majority of the world’s best players.

Some players say it’s the pace, others say it’s the strength, and many say it’s both. Byfield is a bigger guy, standing at six feet, four inches and skates better than most players of his stature. He still, though, noted the differences in pace in jumping up a league.

“The pace was definitely quite faster, you’re playing against the best players in the world,” Byfield said, after his debut. “I’ve got to get up to speed on that, make some more plays and up here, you’ve got to bury your chances or you don’t get the outcome that you want. There’s a couple of learning lessons tonight.”

Looking forward, Byfield will likely feature three more times this season at the NHL level. Dating back to training camp, Kings General Manager Rob Blake said that the plan for some of the younger players this season was to not activate the first season of their entry-level contracts. That plan has held true for Byfield, as well as Kaliyev, with both players playing mostly in the AHL and keeping that first season intact for a longer-term focus on salary cap management.

With the AHL’s Pacific Division announcing this past week that there will be a short postseason tournament, which will include all seven teams, Byfield could be reassigned to Ontario at some point to play out the final games of his rookie season competing with the group he’s competed with for most of the season to date.

For as long as he’s here, however, Byfield is soaking up the moment, and doing his best to bring his best at the NHL level, showing that he belongs in the show.

“I think there’s a couple of teaching lessons I can take [from my debut] and looking forward to the next, just keep on proving that this is the first of many games in my career hopefully. There’s a lot to takeaway, but I definitely feel like I belong here.” 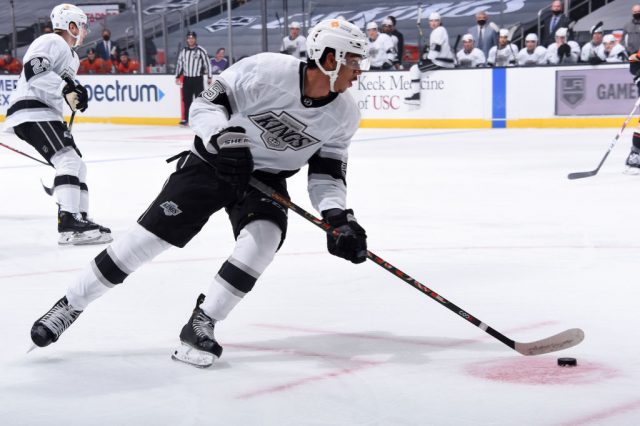 LOS ANGELES, CA – APRIL 28: Quinton Byfield #55 of the Los Angeles Kings skates with the puck during the first period against the Anaheim Ducks at STAPLES Center on April 28, 2021 in Los Angeles, California. (Photo by Juan Ocampo/NHLI via Getty Images)