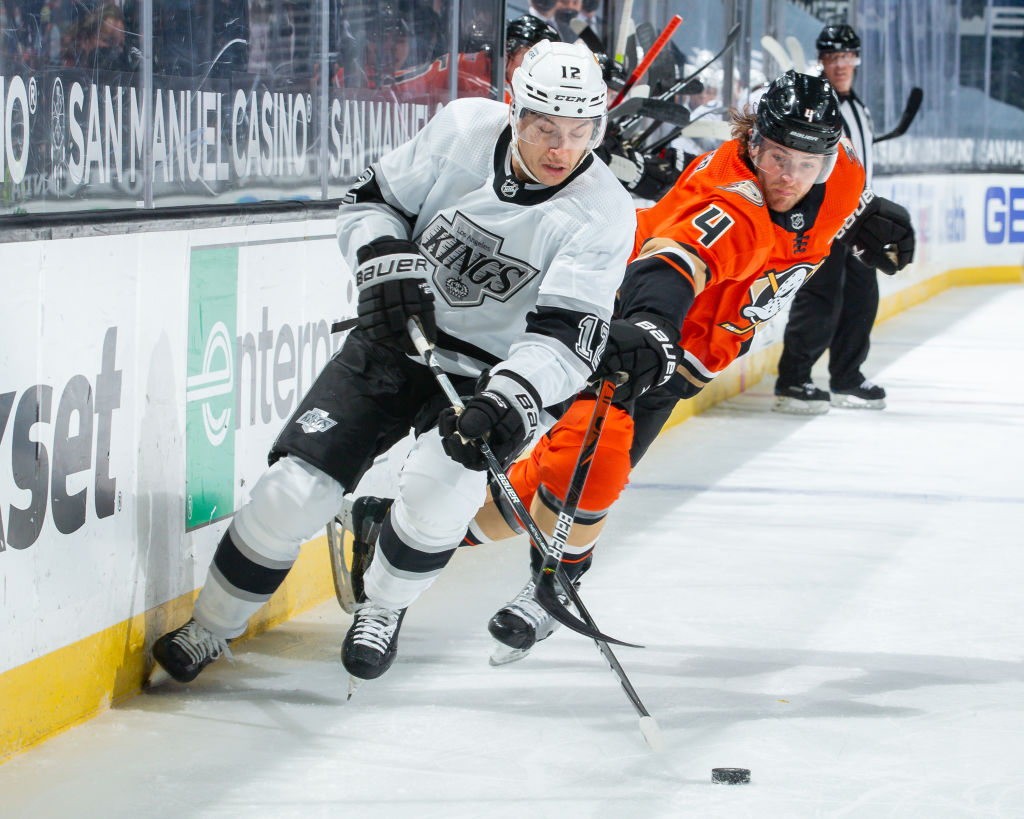 For the second straight night, it was the Anaheim Ducks that controlled more of the puck throughout the game. Unlike yesterday’s comeback win for the Kings, however, it was Anaheim that collected the two points in a convincing 6-2 win at Honda Center in the final edition of the Freeway Faceoff this season.

For the second consecutive game, the Ducks led 1-0 on the scoreboard and 10-9 in shots on goal after one period. Tonight, it was forward Trevor Zegras who opened the scoring from close range, as he got on the end of a diving feed from Max Comtois and slotted past Kings netminder Cal Petersen for his second goal of the season, and the one-goal advantage.

Also for the second game in a row, the second period was controlled by Anaheim. Unlike last night, however, the Ducks scored twice to open up a multi-goal advantage through 40 minutes. Anaheim struck twice off of one timers, first by Danton Heinen from the right-hand circle, followed by another from Nicolas Deslauriers off a 3-on-2 rush. The two goals came within a span of 36 seconds, which immediately followed a Haydn Fleury block that prevented Trevor Moore from scoring on an empty net at the other end.

The teams combined for three goals in a span of 3:26 early in the third period, with the Kings getting on the board but Anaheim striking twice to extend its advantage. First, Max Jones buried his own rebound off of a 2-on-2, to bring the Ducks lead to four goals less than two minutes in. Just over two minutes later, Brendan Lemieux scored his first goal in a Kings jersey to get the visitors on the board, but the moment was short lived with defenseman Jacob Larsson tallying just over a minute later.

Anaheim got one more – courtesy of Comtois – before the Kings got a late goal from defenseman Tobias Bjornfot, who scored his first career NHL goal in the defeat. Bjornfot’s goal came with less than two minutes to play, providing a small late bright spot in a lopsided loss.

Tonight’s game concluded the season series between the Kings and Ducks, with each team winning four of the eight games played. Los Angeles comes out one point ahead, courtesy of an overtime defeat, to win the overall set nine points to eight, though in the larger picture, that doesn’t count for much more than a footnote.

Hear from Bjornfot and Head Coach Todd McLellan from after tonight’s game.

On the importance of the response of the Kings on Monday in Arizona, and a look at the overall landscape
Well, our response Monday, Wednesday, Friday, Saturday, from this point on through, we’re going to play some tough games against some tough teams and we have to get over the fact that we are where we are. Let’s face it, we’re not going to make the playoffs, I might as well say it right now, we’re not going to make the playoffs. I just don’t see how that’s going to happen, and we have to get over the fact that that’s happened. I think that it’s noble that we’re feeling sorry for ourselves a little bit, but we can’t keep playing the way we played tonight and in fact we can’t play the way we did the other night when we won the game. Let’s move on, we know what it is, it’s real and pick ourselves up. We can’t feel sorry for ourselves, that’s where we’re at right now, and play. There isn’t an athlete that can win when they’re not all in. It just doesn’t matter, their performance will never be good enough if you’re not all in and that’s where we were at tonight.

On if Cal Petersen’s recent stretch is on him, versus the team
Well, we’re a team. Some of it’s on him, a lot of it’s on us. Tonight, I don’t think we did a whole lot to help Cal Petersen, in fact we didn’t do a lot to help Jonathan Quick the other night. One made some outstanding saves and we found a way to score two late goals to get the win. By the time the lateness came in this game, it was so far out of reach that the guys played like that.

On a bright spot tonight with Tobias Bjornfot getting his first career NHL goal
Well, it’s exciting, that was the most excitement we had all night on the bench, when he finally scored. Guys were, all of a sudden, there was some life and a little bit of energy, so that’s really good for Toby and good for our guys that we could at least honor him for his first goal. Always exciting to see a young player come into the league and get his first, it seems to be not only an individual moment now but a team moment. At least we had one team moment.

On Ryan Miller and the Kings staying on the ice after the game to congratulate him
He’s meant an incredible amount to the sport of hockey, especially in the US. When he entered the league, hockey was obviously big, but the number of quality goaltenders that are turning out in the US now are due, in large part, to his success, his participation, his willingness to give himself to his country. You hear things around the league about players and you never hear a negative thing about this guy. He’s a positive guy all the time, he loves the game, he loves playing it. I’m sure there’s going to be sticks in his driveway and nets all over the place with his young guy over time. When we met with him, I’m sure everyone shared different things with him, I just told him to enjoy life now with his wife and his son and give them all the time that he has, and I’m sure he will.

– Defenseman Tobias Bjornfot scored his first career NHL goal late in the third period.
– With an assist on Bjornfot’s goal, forward Adrian Kempe collected his ninth point (6-3-9) from eight games this season against Anaheim, tied for the most in the NHL.
– Forward Brendan Lemieux collected his first goal as a member of the Kings in the third period, which got the visitors on the board.
– For the second straight game, the Ducks led 1-0 in goals and 10-9 in shots on goal through 20 minutes, with the Kings conceding first for the 30th time this season from 49 games played

The Kings are not scheduled to practice tomorrow, following the back-to-back, and will travel to Arizona in advance of Monday’s game against the Coyotes.