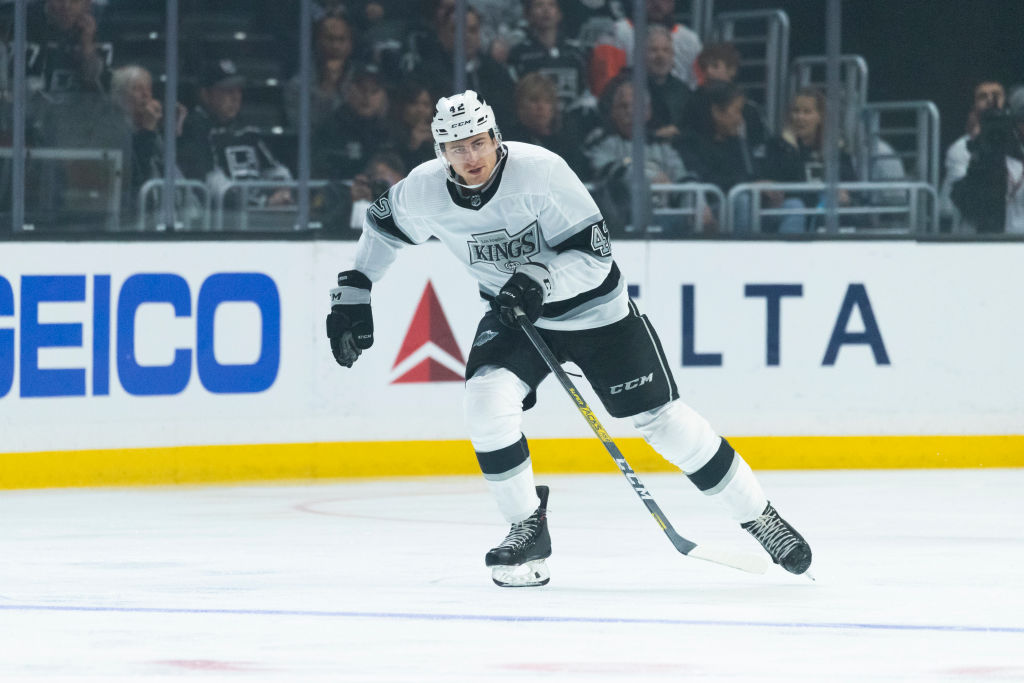 TONIGHT’S MATCHUP: The Kings head to Anaheim tonight for the final two games of the season against the Ducks, with the Freeway Faceoff hitting the ice tonight and tomorrow evening at Honda Center.

HEAD-TO-HEAD: Forward Adrian Kempe (6-2-8) leads all skaters this season with eight points from six games played against Anaheim, bolstered by his third multi-point game of the season versus the Ducks on Wednesday. Kempe is one goal, and one point, shy of the season lead amongst all skaters, leaguewide, against Anaheim this season. For the hosts, forward Rickard Rakell leads all skaters with five points (2-3-5) from six games played against the Kings, while goaltender John Gibson has won three of his four starts.

KINGS VITALS: The Kings held an optional morning skate today, in advance of their short ride to Anaheim.

Though today’s skate did not have a full collection of skaters, yesterday’s practice set up a few different lineup notes.

Forward Quinton Byfield is expected to remain in the lineup this evening, for the second straight game, after his NHL debut on Monday. Byfield centered the second line, between Adrian Kempe and Trevor Moore, a line that was encouraging throughout, and got stronger as the game progressed.

Also of note was that forward Blake Lizotte is currently out with an upper-body injury. He did not skate today, for the second straight day, and is unlikely to feature this weekend against Anaheim. As such, forwards Jaret Anderson-Dolan and Austin Wagner both returned to the bottom-six group yesterday, which aligned as follows –

McLellan also indicated yesterday that the 11 forwards / 7 defenseman look, used against Anaheim on Monday and Wednesday, is not a guarantee to continue, with the possibility of both Anderson-Dolan and Wagner returning to action tonight.

In terms of Anderson-Dolan, McLellan said that his game has settled in a bit, after was was a very noticeable start. The injury he suffered, right as he was playing perhaps his best hockey, didn’t help, and he’s seen signs of a young player navigating his first career NHL season, but stressed that he was not taken out of the lineup due to performance.

“JAD, he certainly wasn’t playing as well as he as he had been when he originally comeback, I think the shoulder injury that kept him out for three weeks set him back, he wasn’t as confident,” McLellan said. “He didn’t come out because he was playing poorly, he came out because we needed to find some playing time for a left winger and a center, and we may have other players, from now until the end of the season, that it happens to. Not always does the change occur because of performance, sometimes it changes because of an organizational desire to look at some other people.”

In net Cal Petersen and Jonathan Quick split the games earlier this week at STAPLES Center, with Quick victorious on Monday, and Petersen on the losing end two days later. With the back-to-back set this weekend, general consensus would think a split of games, but McLellan did use Petersen in both games of the team’s most recent back-to-back set.

If Quick goes, he is 1-0-0 against Anaheim this season, with 21 saves on 22 shots in his lone start earlier this week. Petersen is 1-2-1 from four starts versus the Ducks, with a .895 save percentage and a 2.98 goals against average.

DUCKS VITALS: Looking at Anaheim, in terms of a starting goaltender for tonight, Anaheim is expected to start Gibson in net tonight, and Ryan Miller tomorrow, per Elliott Teaford of the OC Register. Miller announced yesterday that he will retire at the end of the 2020-21 season, with tomorrow’s game serving as his last at Honda Center. In four starts against the Kings this season, Gibson has posted a 3-1-0 record, a .886 save percentage and a 3.21 goals against average, as he ceded 11 goals from the two games played earlier this season in Anaheim.

The Ducks recalled forward Trevor Zegras and defenseman Simon Benoit in advance of Wednesday’s game. Here’s how the Ducks lined up last time out on Wednesday –

Forward Adam Henrique is still on the NHL’s COVID Protcol list, and per Teaford is out through the weekend, while defenseman Josh Manson also remains out day-to-day.

A Look Inside A Trying Season

It’s easy to watch a player on game nights and make decisions, but it’s harder to look at the bigger picture.

In the American Hockey League, in the Pacific Division at least, games are typically played on Fridays and Saturdays, with midweeks here and there, Sundays here and there, but rarely are you looking at more than three games in a week, usually with at least 2-3 days in a row off, at least every couple of weeks.

The NHL is different. Games are not pushed towards marquee attendance days of the week, as they are in the minor and junior leagues, and teams are playing just about every other day for months straight. That’s an adjustment to make, and for forward Gabriel Vilardi, he gave us some insight into that adjustment as he winds down his first full season with the NHL team.

“Just coming to the rink every day, playing every other day this season is a little different, it’s a lot of hockey, and it’s tough,” Vilardi said this morning. “You don’t really get a lot of distractions, it’s very different than last year in the AHL, you play maybe twice, three times a week tops and then the next week maybe you only play once or twice. This year, it’s like you’re playing three, four games every week and there’s really not much time to practice, either. You build a lot of confidence in practice and doing stuff that you guys don’t see kind of thing, and it’s been tough this year. You play a game, the next day you’re back at the rink and practicing, but you’re not really practicing, you’re just working on a couple things and you’ve got a game the next day again, so you can’t really push yourself too hard because you don’t want to be tired. It’s just a constant grind kind of thing.”

Now those things are all true in any NHL season, but the added elements to this particular season is the additional mental toll taken on everyone in and around an NHL team this season.

With restrictions in place due to COVID-19, it’s been challenging to find much of a break from the game. Vilardi added that the mental battle this season has been different as well, and the recovery process from day-to-day changes without getting those distractions from the game that you might normally get.

“It’s really hard mentally, honestly, it’s tough, especially this year,” he added. “It’s tougher for everyone, everyone’s going through different mental battles with this COVID and not being able to do anything, see your family and that type of stuff. It’s definitely challenging mentally.”

One positive for Vilardi, though, is that he’s been able to remain relatively healthy throughout the course of a season for the first time in a long time. His start date last season was delayed into December due to the same chronic back injury that cost him all but four games of the 2018-19 season.

Vilardi’s health, both day-to-day and in the longer term, has been a well-told story over the last few years, ever since he was selected by the Kings in the first round of the 2017 NHL Draft. On that side of things, the first-year forward was thankful to be able to take care of his body, with the help of those in place around him.

Vilardi and the Kings are in action tonight at 7 PM at Honda Center, for the penultimate game this season versus the Ducks. The team will be wearing the 90’s throwback jerseys both nights in Anaheim.