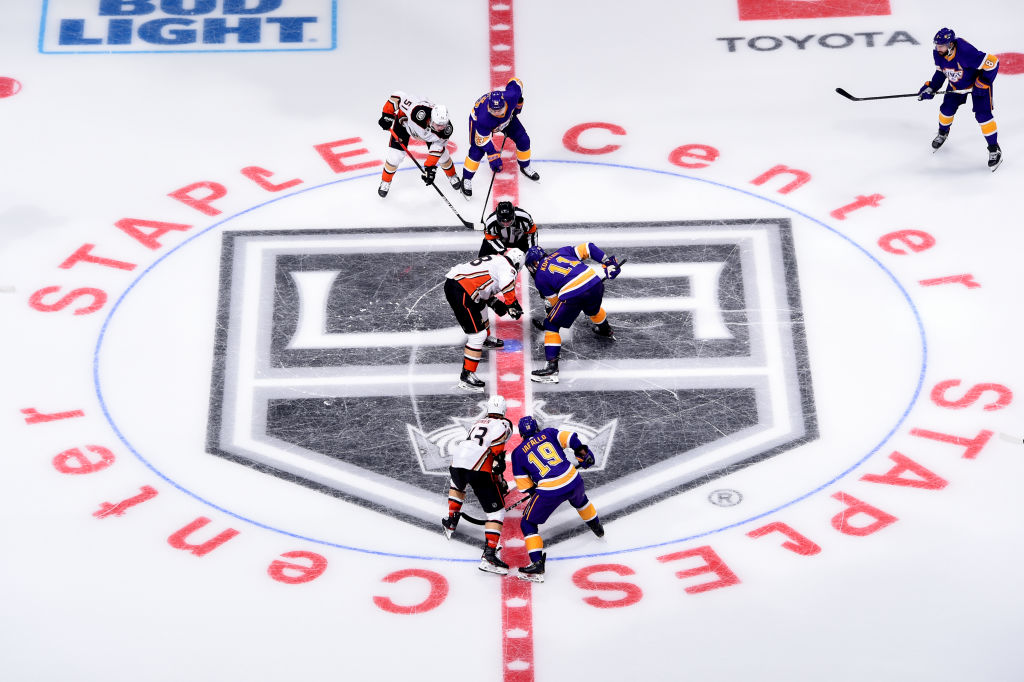 “When you’re not sharp, and you’re not executing properly, it’s going to be one ugly game and it was that for us.”

That was the resounding message from Todd McLellan after Night 2 against Anaheim, which wiped out Monday’s victory as the teams shared the spoils from two games played at STAPLES Center.

The quote could apply to either night, as Kings didn’t play their sharpest game on either night, but they came away with a win on Monday, setting up the stage for their first two-game sweep since late-February in St. Louis. A 2-0 lead midway through the second period on Wednesday, with goals from both special-teams units, made that prospect feel real. From there on though, the Kings were unable to put away the Ducks with one of several chances, with lapses in the defensive zone leading to goals against and a 3-2 defeat.

Monday’s win had two goals from defensemen, a strong, forechecking effort from Adrian Kempe, and the team seemed to embrace the 11F / 7D alignment and play to its strengths, with players such as Kempe, Andreas Athanasiou and Alex Iafallo taking advantage of extra ice time. The Kings led by two goals early, but did not put their opponent away on Monday, though it turned out not to bite them.

That wasn’t the case on Wednesday, however. With a similar two-goal advantage, the Kings had several opportunities, both at even strength and on the power play, to bury the Ducks, but couldn’t do it. LA had five opportunities on the man advantage, for just the second time this month, and did score once, but it was the other four chances that left McLellan ruing what could have been.

“There were a lot more cons than pros, I’ll tell you that,” McLellan said. “It should be a chance for us to drive a dagger into the other team and get hungry, put the game out of reach and it’s not that right now. It starts from behind our own net, breaking out, guys aren’t alert, they’re not sharp for the puck. We very rarely attack North-South right now in the offensive zone, we want to go East-West, through everything. Sometimes the puck gets through and we just start all over again. Yeah, we got a goal tonight, it was the most direct our power play has been in a while, but the rest of it didn’t meet NHL standards.”

The power play has been a storyline all season long, but the narrative has changed.

In the first half of the season, the Kings were among the NHL’s best on the man advantage, and the team seemed to find the back of the net every night. In the first 25 games of the season, the Kings scored 25 power-play goals. In the 22 games since, they’ve scored just six, including the one last night. The goal was an example of what the unit can do well – Quick Pass, One-Timer, Puck Retrieval, Rebound Goal. Bang. It just didn’t happen enough.

At that 25-game mark, the Kings were three games over .500. Since that time, they’ve gone 7-15-0, falling five games under for the first time this season. It’s just one area of the game, it’s not the only reason to explain why fortunes have changed, but it’s certainly the most drastic difference between the first and second parts of this season to date.

The power-play struggles, and loss of a two-goal lead, put a small damper on the most positive news of the evening, which was the NHL debut of forward Quinton Byfield. McLellan felt Byfield started strongly and earned a greater role, and more responsibility, as the game went along. In the second half of the game, Byfield’s line with Adrian Kempe and Trevor Moore was the team’s most dangerous, totaling seven shots on goal in total, when no other unit had more than three together.

“He earned the opportunity as the game went on, as I said he was one of the better players,” McLellan said of Byfield. “If we didn’t trust him, and we didn’t feel good putting him on the ice, we wouldn’t have. I think his minutes, and the opportunity he got reflects his play, and hopefully we can grow on that.”

The plan moving forward, as stated by management from the start of the season, is not to play Byfield more than the six games this season that keeps the entry-level slide eligibility of his contract intact. Following yesterday’s debut, that leaves five games from the final nine before a year would be activated.

Byfield will be one of several players in evaluation mode down the stretch. The Kings inserted Lias Andersson back into the lineup yesterday, and he had perhaps the team’s best two chances in a goalless first period. Andersson had an extended run of games in the first half, but has played just three times in the NHL since February 16. Andersson logged 12:37 last night, skating on the third line, his third-highest total of the season. Andersson’s activation flew under the radar, considering Byfield’s debut, he could see his own important opportunity here over the last slate of games as well.

Beyond Andersson and Byfield, the Kings still have a recall remaining from the AHL’s Ontario Reign, and there’s no wrong answer on who to give it to, with several intriguing options. Nonetheless, McLellan indicated that. different players will get an opportunity over the team’s final now nine games, and that will likely include the final callup.

“We are going to get some other players into the lineup to look at them,” McLellan said, in between games. “It creates that internal competition, it’s something that we want and that we need. If you have that, I think your organization is moving forward.”

The schedule continues with the final two games this season against Anaheim, with both games played at Honda Center this weekend, before games against Arizona, Colorado and St. Louis to conclude the regular season. Four different opponents, with plenty to evaluate over the final nine games.