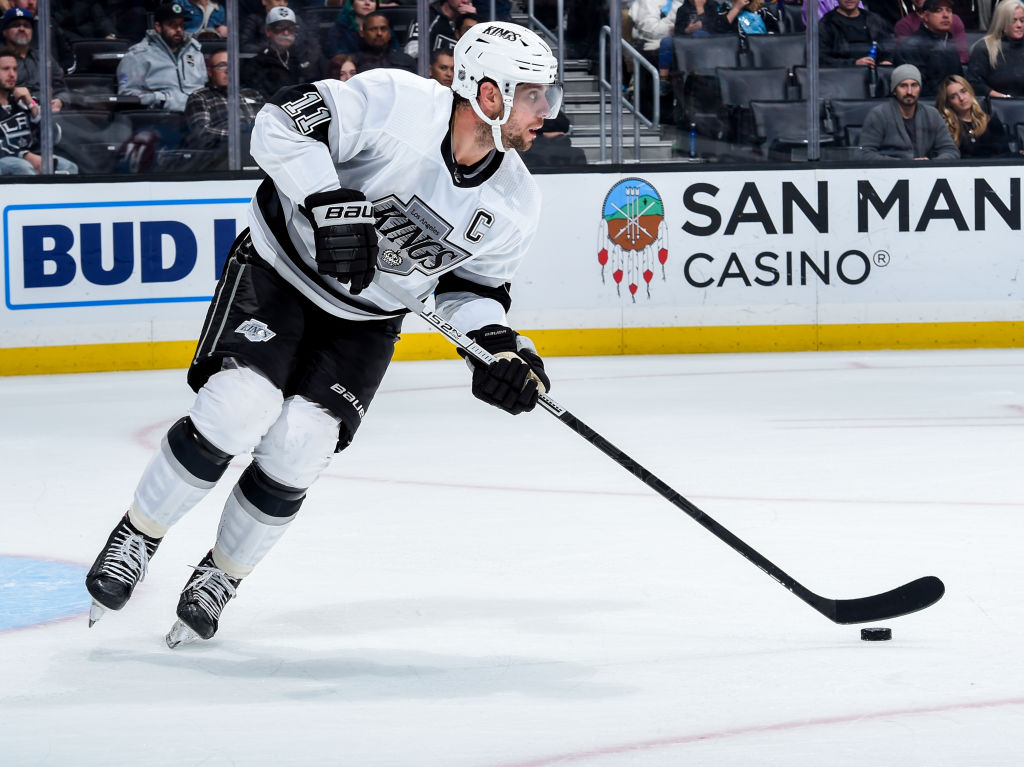 TONIGHT’S MATCHUP: The Kings return to the ice for game two of four against the Anaheim Ducks this week, with the last meeting of the season at STAPLES Center.

HEAD-TO-HEAD: Forwards Adrian Kempe (5-1-6) and Andreas Athanasiou (3-3-6) lead the Kings against Anaheim with six points apiece. Athanasiou tallied his 11th career point versus the Ducks on Monday, his most against any one NHL opponent. Defenseman Drew Doughty leads all skaters with five assists from five games played. For the Ducks, the visitors tonight are led by forwards Rickard Rakell (2-2-4) and Max Comtois (0-4-4), who have each collected four points in the season series to date.

KINGS VITALS: Following a full-team skate yesterday, the Kings were on the ice this morning for an optional morning skate at Toyota Sports Performance Center.

The big news from Todd McLellan this morning is that forward Quinton Byfield is expected to make his NHL debut this evening. Byfield was recalled from the AHL on Monday, took his first full practice with the big club yesterday and is in line for his Kings debut later on this evening.

Yesterday’s practice saw Byfield slotted amongst the top six forwards and he will likely center a line with Adrian Kempe and Trevor Moore.

“We wanted to put him with veteran players who have confidence and feel comfortable right now, somebody that can support him, and Kempe is that type of player,” McLellan said of the line. “He can skate with him, has experience in the league, and Trevor Moore is [also] going to play with him tonight. He has a tenacity to his game, and a confidence to his game right now that will also compliment him. They’re both responsible, defensive players as well, both good penalty killers, and maybe they can help him in that facet as well.”

The arrival of the team’s top draft pick in October has been much awaited. In Byfield, the Kings add a center who, when on his game, is a puck-dominant player with the ability to carry it through the middle of the ice and create offensively for both himself and his teammates.

At 18 years, 252 days old, Byfield would become the sixth-youngest Kings player of all time to play for the Kings, slotting in just behind Tobias Bjornfot, who made his debut last season at 18 years, 182 days old. Byfield is also the fourth-youngest forward in franchise history behind just Jimmy Carson, Brayden Schenn and Doug Smith, all Top-5 draft picks of the Kings.

“I think he’s understood and begun to adapt to the pro game, at the American League level,” McLellan said this morning. “He’s become more responsible defensively, understands the pace of play and how quickly he has to make decisions and distribute pucks. I hope that he’s not one that will feel obligated to move pucks to older, more experienced veterans, because he has a very good skill set, we want him to use that, and command the use of the puck, the distribution of it, the shot selection. Sometimes, young players feel a little bit intimidated, like they have to do that, but I hope he doesn’t feel that way, because quite obviously at the American League level, he’s overcome that and he does control games at times.”

McLellan the added comfort level of moving just across the hallway to go from the AHL to the NHL, as opposed to say flying in from Manchester, New Hampshire. Byfield is already familiar with both coaching staffs, familiar with many of the NHL players and appears ready to roll. McLellan added that Byfield will likely start on the second PP unit, and could see shorthanded time as well, as he did in the AHL.

All good signs, for a highly anticipated debut, but at the same time, there are no unrealistic expectations for a young player in his first game.

“We don’t want to overload any individual, especially an 18-year-old coming into the league. We’re going to use the old cliche of play the game, enjoy the moment, take everything in, don’t be afraid of making mistakes.”

With the rest of the group, the Kings went with 11 forwards and 7 defensemen on Monday, which opened up additional ice time for players up front such as Kempe and Andreas Athanasiou. It does, however, limit the ice time of most guys on the backend, especially on the left side. McLellan said that we may see that look more moving forward and when asked this morning, he said not to assume an automatic change back to a standard 12/6 alignment.

If 11/7, Kurtis MacDermid was the team’s seventh defenseman on Monday and that would likely continue. If 12/6, yesterday’s practice gave the appearance that Lias Andersson might also enter in, along with Byfield, with Jaret Anderson-Dolan skating with those not playing. Today’s skate, being optional, was inconclusive and we wait for warmups tonight for further clarity, and Andersson would need to be added to the active roster in order to play.

In net, Jonathan Quick returned on Monday following three consecutive starts from Cal Petersen and was solid for the Kings, as he earned the victory with 21 saves on 22 shots in his first game played against the Ducks this season. The rotation used for much of the season would point back to Cal Petersen tonight, but that rotation has changed over the last slate of games. If Petersen starts, he is 1-1-1 with a .902 save percentage and a 2.96 goals against average against Anaheim this season.

DUCKS VITALS: Looking at the visitors, ,n terms of a starting goaltender for tonight, Anaheim Head Coach Dallas Eakins said yesterday that all three of their netminders – John Gibson, Ryan Miller and Anthony Stolarz – will see games down the stretch. Stolarz started on Monday, as well as the game at STAPLES Center last week, both 4-1 Kings victories. John Gibson started the first three games of the season, winning two.

Isac Lundestrom returned to the lineup on Monday, after he missed eight games due to appendicitis. Monday’s contest was his first since April 6. Forward Adam Henrique was added to the NHL’s COVID Protocol and did not play on Monday, with what was reported as a close contact, not a positive test. Defenseman John Manson remains “day-to-day”, and has not played since he was injured in a fight with Brendan Lemieux on April 18.

On The Back End

Perhaps lost in the Byfield-mania is that McLellan made a few changes on the backend last game as well. Not only did Kurtis MacDermid check in, with the Kings dressing seven on the backend, but the Top 4 was also shuffled around, with Tobias Bjornfot moving up with Drew Doughty, and Mikey Anderson slotting in next to Matt Roy.

Both pairings have been used before, neither are untested, at least at some level.

“The new look was one that was flexible obviously, dressing seven, so everybody got some time with different players,” McLellan said yesterday. “The new look may not last forever, but I think Mikey Anderson has developed greatly as a rookie player in the league, and Drew Doughty has had a big part in that. To give Toby a little taste of that is something that we want to experiment with, from now until the end of the season. That’s not to say we won’t go back to Mikey, but I think Mikey is quite capable of standing on his own, or with another partner. Perhaps giving Toby some experience against the other team’s top players and taking his minutes up a little bit, will give him a little boost as well.”

Bjornfot was the natural beneficiary of the move, slotting alongside Doughty, as he did for a cup of coffee at the beginning of last season. It also reunites the pairing of Anderson and Matt Roy, as steady as they come, as they started the season. Bjornfot talked this morning about playing with Doughty, and being ready for anything alongside one of the NHL’s best on the blueline.

“It feels good, he’s easy to play with and I just need to keep my stick on the ice and talk to him,” Bjornfot said. “He’s a smart player and he can make some passes you don’t quite know he could. You need to be ready and have a stick on the ice, be ready and see what’s happening.”

Both Doughty and Roy are good defensemen on the right side, but obviously, there are differences in style. Roy is “Steady Eddie” and you typically know what you’re going to get most shifts. Not to say Doughty isn’t steady, but he’s also more inclined to do different things on the ice, as Bjornfot noted above, and he’ll attempt plays that others wouldn’t even think of.

With seven defensemen in play, there’s less of a set pair rotation, and more mixing and matching for sure. Whether or not that is indeed the look tonight, on the shifts they do play together, Bjornfot feels ready to go with Doughty.

We Want Some Moore

Lastly, hear from forward Trevor Moore this morning on a number of different topics.

The energetic winger discussed playing as one of 11 forwards versus 12, the excitement surrounding his linemate tonight, Quinton Byfield, how he communicates with new linemates and some memories from his own NHL debut, back with the Toronto Maple Leafs.