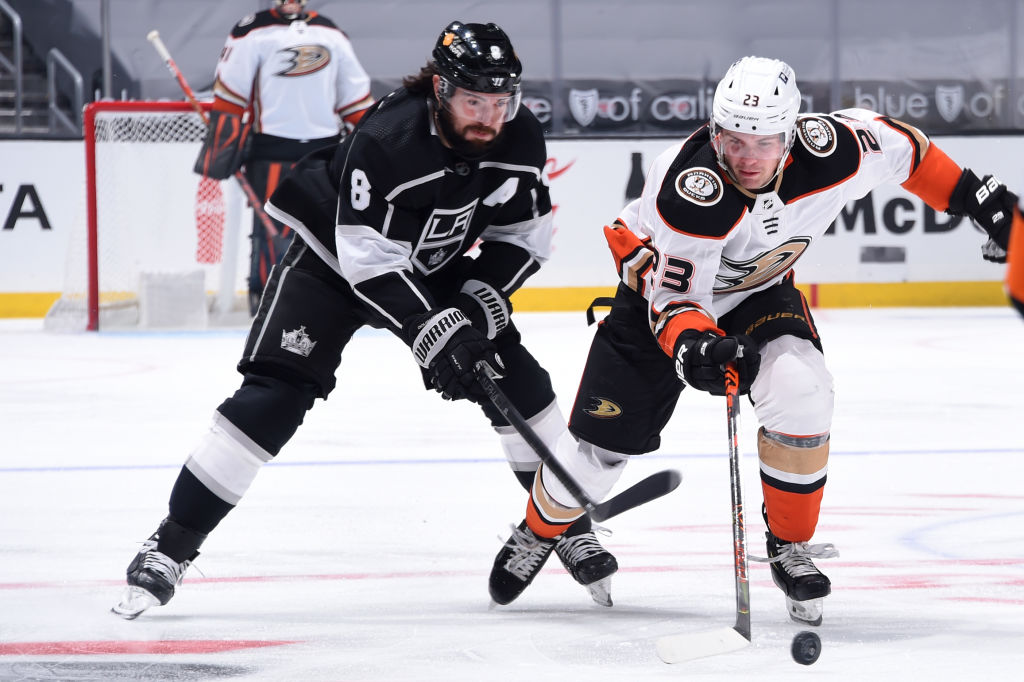 The last game the Kings had played before hosting Anaheim on Tuesday, one week ago today, they allowed the second-most high-danger chances (15) they have all season. Against the Ducks, they tied for their season-low (2).

Before we get too excited, this isn’t a “the Kings magically fixed all of their defensive issues overnight” situation, because it needs to be taken into consideration that two games ago, the Kings hosted one of the highest-scoring teams in the NHL in Vegas, while no team in the league has scored fewer goals this season than their last opponent in the Ducks. It’s one game and the Kings will need to continue to progress forward.

It was certainly a step in the right direction though. The Kings had conceded 13 goals from the three prior meetings against Anaheim, and the series against Vegas left the coaching staff with concerns about the team’s defensive-zone play. Tuesday was a much better performance, with most of Anaheim’s opportunities coming outside of the high-danger areas on the ice. Grade A chances were at a premium, and the improvements made by the Kings defensively certainly played a role in that.

“I mean, we were definitely better,” defenseman Drew Doughty said last night. “At times I was happy with our defensive performance, in cleaning up those issues we definitely did a better job, but we had stretches in each period when they kind of dominated us in our zone and hemmed us in. We need to fix that.”

You really like seeing both sides of that quote from Doughty. Yes, the Kings were better, and he also added the context that there is a difference between playing Vegas and playing Anaheim. The second part, however, says that better isn’t good enough.

Take one play, late in the second period, as what could have been a turning point in the hockey game. The Kings had opened up a 3-0 lead, but a defensive-zone breakdown led to perhaps the best Anaheim chance of the opening 40 minutes, with Doughty diving to block Adam Henrique’s shot at a gaping net.

“It’d be easy, when you’re up three, to not sacrifice and get out of the way, but that was going in the net,” Head Coach Todd McLellan said. “That goes in, they start the third, a minute in on clean ice with a power play, it changes the whole game. That’s who Drew is, he doesn’t get enough credit for the things he does so well defensively.”

That play was a defensive breakdown, bailed out by an elite defenseman. It didn’t go in, it didn’t hurt the Kings when all was said and done, but it’s a perfect example of what Drew Doughty stands for, as a player and as a leader. Blocking that shot shows exactly what Doughty will do to win hockey games, and still recognizing that there is work to be done, even after allowing a season-low in quality chances against, is part of what makes him such a terrific leader.

Looking past just the play of Doughty, the Kings did what they needed to do, against an opponent they need to find a way to beat at this point, both in the season and in the process.

On the backend, the addition of Matt Roy and Tobias Bjornfot back into the lineup, I believe, cements what the group of six blueliners looks like when everyone is healthy. That pair slotted in with third-pairing minutes with both players getting back into action. They lost the puck possession game, but neither player had played in over two weeks. A solid pair at full speed, and combined with a Maatta – Walker pairing that has played well together, it’s starting to look like a decently solid defensive unit.

The Kings got a goal from the Kopitar line, but as has frequently been a major theme in Kings victories this season, another line stepped also up. LA doesn’t have a true “second line” at this point in time, so getting one of the three lines in the “bottom nine” to produce behind the top line is essential. Last night, it was the Grundstrom – Lizotte – Athanasiou unit, which combined for three goals and eight total points.

All three players scored, with Lizotte collecting the first three-point game of his professional career, while Athanasiou did it for the first time in a Kings jersey and Grundstrom picked up his second career multi-point game.

“They didn’t give up much and I thought there was a little extra intensity to them, McLellan said of that trio. “They played with a lot of pace, they created some turnovers, made some really nice plays on some scoring opportunities, took advantage of them. They were good on the penalty kill, they played with a lot of pace and smart pace in their game, it wasn’t wasted energy. I think that was the difference with that line.”

With four of the next six games coming up against Anaheim, and the next four in total coming on home ice, the improvements shown by the Kings are something that would be encouraging to see continue. LA sits either five points out with four games in hand, or four points out level on games, depending on who you consider them to be chasing for the four seed.

Despite what has not felt like a particularly successful stretch for the Kings, their 4-6-0 record over their last ten games is still somwhow better than that of St. Louis, Arizona or San Jose. The Kings have done just enough to hang in there, and create meaningful games as we approach the final 13.

“It’s huge, it’s kind of a special year in terms of the standings,” Lizotte said of the homestand to come. “We’ve had a bit of a rough stretch, a little bit ago, and we’re still in reach of a playoff spot, we feel that we can get there. It’s playoff hockey this time of year and the intensity is going to continue to ramp up. I think we just need to focus on the details of our game. When we take care of our details, we’re tough to beat.”

“When we take care of our details, we’re tough to beat.”

We’ve said it before, and we’ll say it again, when the Kings play the right way, they have had success. It just hasn’t come with any form of consistency. The details were there, especially defensively, on Tuesday and it resulted in a victory. With the door wide open for a run, it’ll come down to whether they can take care of those same details moving forward.