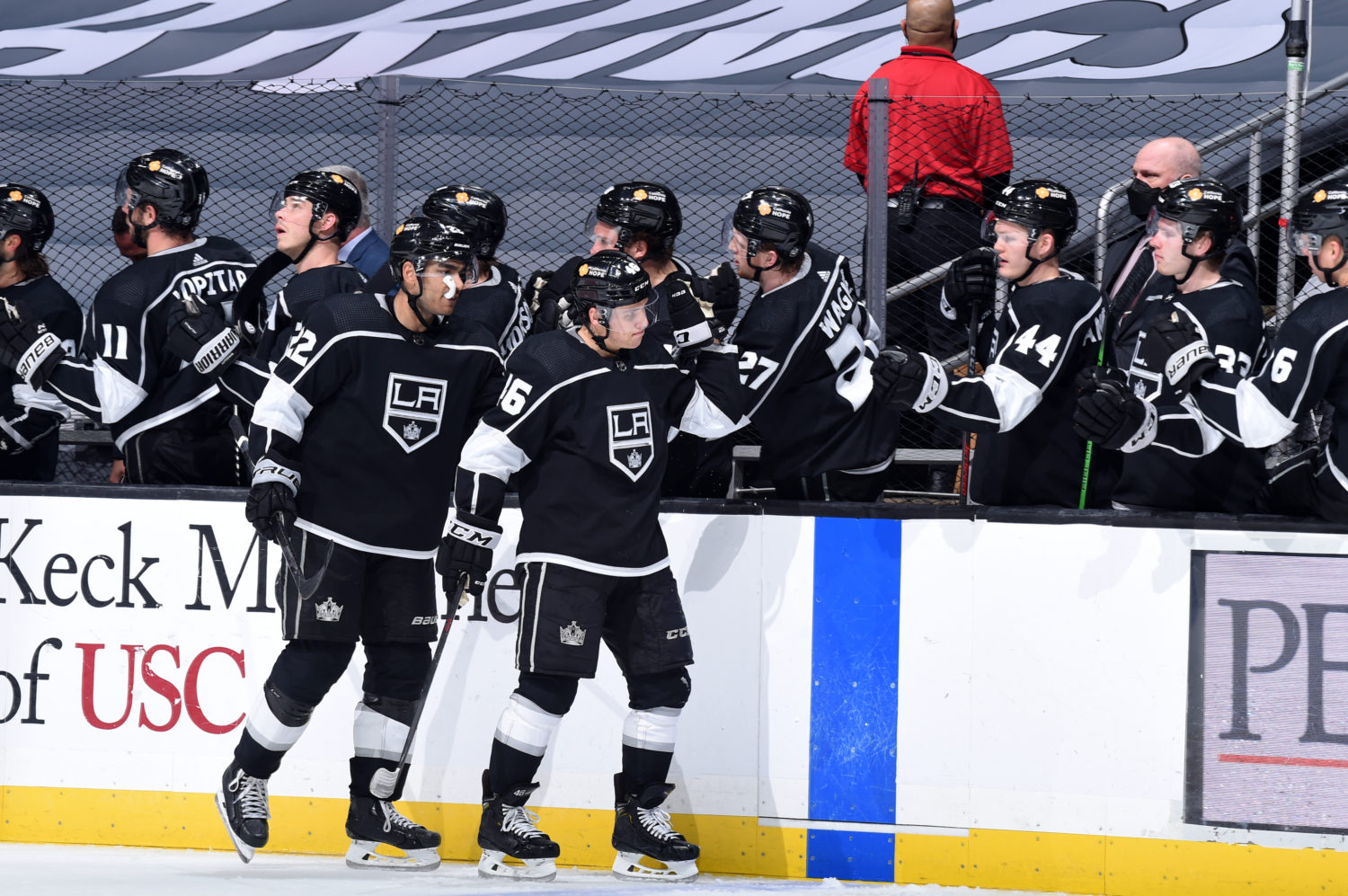 The LA Kings skated to a 4-1 victory over Anaheim, in the first of five straight home games over the next nine days.

The Kings got the lone goal of the first period, courtesy of a fortunate bounce, to take a 1-0 lead through 20 minutes. Carl Grundstrom entered the offensive zone and dropped to Andreas Athanasiou, stationed on the left-wing boards. Athanasiou’s shot from distance hit Grundstrom on the back and deflected past Anthony Stolarz for the game-opening goal, Grundstrom’s sixth of the season.

The hosts struck twice more in the middle stanza to take a three-goal lead into the third period. First, defenseman Drew Doughty sprang Anze Kopitar on a breakaway, and the captain buried past Stolarz for the two-goal lead. The Kings scored just over two minutes later, with Olli Maatta feeding Athanasiou across the ice for a one-timer from the right-hand circle, giving Athanasiou a multi-point game.

The second period ended with a play that will be forgotten in a box score, outside of a 1 added to the blocked shots column, but Drew Doughty kept Anaheim off the board with less than five seconds to play. His diving block, with a gaping net, denied Adam Henrique in front, to keep it a three-goal advantage for the Kings.

Each team scored once in the third, beginning with Lizotte capping off his three-point night with a rebound goal midway through the final period. Both of his linemates, Grundstrom and Athanasiou, tallied assists on the play. Anaheim ended Cal Petersen’s shutout bid with 5:24 on the clock, as Cam Fowler made a move at the left point, walked into the top of the left-hand circle and scored on a wrist shot through traffic for the lone Ducks goal on the evening.

The Kings were substantially better defensively, albeit against a different opponent, as they tied their season-low for high-danger chances allowed with just two at 5-on-5, per Natural Stat Trick. Looking ahead, the Kings will play their next four games at home, and four of their next six against the Ducks.

On the team’s play defensively, especially in and around the net
I mean, we were definitely better. At times I was happy with our defensive performance, in cleaning up those issues we definitely did a better job, but we had stretches in each period when they kind of dominated us in our zone and hemmed us in. We need to fix that.

On his block late in the second period
Nothing feels better than that, honestly, for a d-man, that’s like scoring a goal for us. We obviously like to score goals a little more than block shots, but for us, it’s something to be proud of. Blocked shots are a huge part of this game, a lot of players aren’t even willing to do it, and every defenseman on our team is, it’s something we take a lot of pride in.

On the play of Cal Petersen behind him tonight
Cal was good, he made some big saves. They had five-to-six minute flurries in each period where they were kind of in our zone the whole time and he always came up with the big saves. I thought we did a way better job at keeping chances to a minimum tonight. Like I said earlier, it’s a different team, a different game. I thought we did a better job but there’s still a lot we can clean up, we need to play a little bit better than that next game.

On what went well for his line tonight
It’s hard to explain that. I think we were just simple tonight, played direct and when you get pucks to the net, good things happen. I think sometimes we have a tendency to overpass and tonight we were playing direct, got pucks to the net and as a result we got a few goals.

On the importance of this homestand for the Kings and carrying the momentum into the weekend
It’s huge, it’s kind of a special year in terms of the standings. We’ve had a bit of a rough stretch, a little bit ago, and we’re still in reach of a playoff spot, we feel that we can get there. It’s playoff hockey this time of year and the intensity is going to continue to ramp up. I think we just need to focus on the details of our game. When we take care of our details, we’re tough to beat.

On his increased offensive production as of late
You kind of go through stretches in this league, it’s the toughest league in the world, there’s good players and your confidence, your comfortability level definitely varies throughout a season, the ups and downs of playing in this league. I think, as of late, I’ve kind of found my stride and I’ve felt more confident trying to make plays. It’s something that every player goes through and I think it’s a part of maturing in this league. I’m just happy to be on this side of it where I’m playing confidently right now.

On hearing that roar from the fans after the first goal
It was unbelievable. It’s been a little over a year since we’ve heard fans and it’s something you take for granted, when you have fans all the time. These last three months, when we haven’t had fans, it’s a different atmosphere, a different play style, it’s not as exciting. I’m absolutely thrilled to have our fans back, providing energy for us, it seriously makes a huge difference. Absolutely love having them back, it was great tonight.

On cutting down the Grade-A chances against, and his team’s defensive effort tonight
I think this game, both teams took a bit of a checking mentality. It certainly wasn’t wide open, there weren’t a lot of chances either way and that makes for a lot of scrambles, a lot of groupings of players fighting over a loose puck, there wasn’t a lot of free flow. Things we worked on in practice showed up in the game, which was rewarding, the time spent was good. As a result, it helped us win a game.

On Drew Doughty’s block late in the second period, and if that shows who he is as a player
I think you’re exactly right. It’d be easy, when you’re up three, to not sacrifice and get out of the way, but that was going in the net. That goes in, they start the third, a minute in on clean ice with a power play, it change the whole game. That’s who Drew is, he doesn’t get enough credit for the things he does so well defensively. I think players right now, at least on the backend, are so much evaluated and coveted for their offense, and Drew does have that, but sometimes you forget about how good some of these guys are defensively and that’s what he is also.

On what Blake Lizotte’s line did well tonight
They didn’t give up much and I thought there was a little extra intensity to them. They played with a lot of pace, they created some turnovers, made some really nice plays on some scoring opportunities, took advantage of them. They were good on the penalty kill, they played with a lot of pace and smart pace in their game, it wasn’t wasted energy. I think that was the difference with that line.

On playing in front of fans tonight at home for the first time
It was very rewarding. We’re thankful that we get to do what we do, but we’re really thankful that the fans can get back into the building. It means so much to the game itself, it means a lot to us, I’m sure it meant a lot to Anaheim, here and in their arena, but it just creates the right atmosphere for the evening. That tape of that generic fan noise, we can throw that thing away, I hope I never hear that again. It was nice just to hear the fans get excited, hear the fans get upset, it felt right finally.

– Forwards Andreas Athanasiou and Blake Lizotte each collected three points (1-2-3) tonight.
– The three-point night was the first of Lizotte’s professional career and he now has six assists and a +6 rating over his last ten games.
– Athanasiou collected three points for the first time in a Kings jersey and the fourth time in his NHL career.
– Forward Carl Grundstrom had a two-point night (1-1-2), his second multi-point effort both of the season and his NHL career
– Anze Kopitar collected his team-leading 44th point of the season with a goal in the second period.
– Drew Doughty moved back into the NHL’s Top 10 in points amongst defensemen with his 32nd of the season.
– With an assist on Kopitar’s goal, forward Dustin Brown now has five points (1-4-5) over his last five games played.

The Kings are not scheduled to skate tomorrow, and will return to practice on Thursday at Toyota Sports Performance Center.