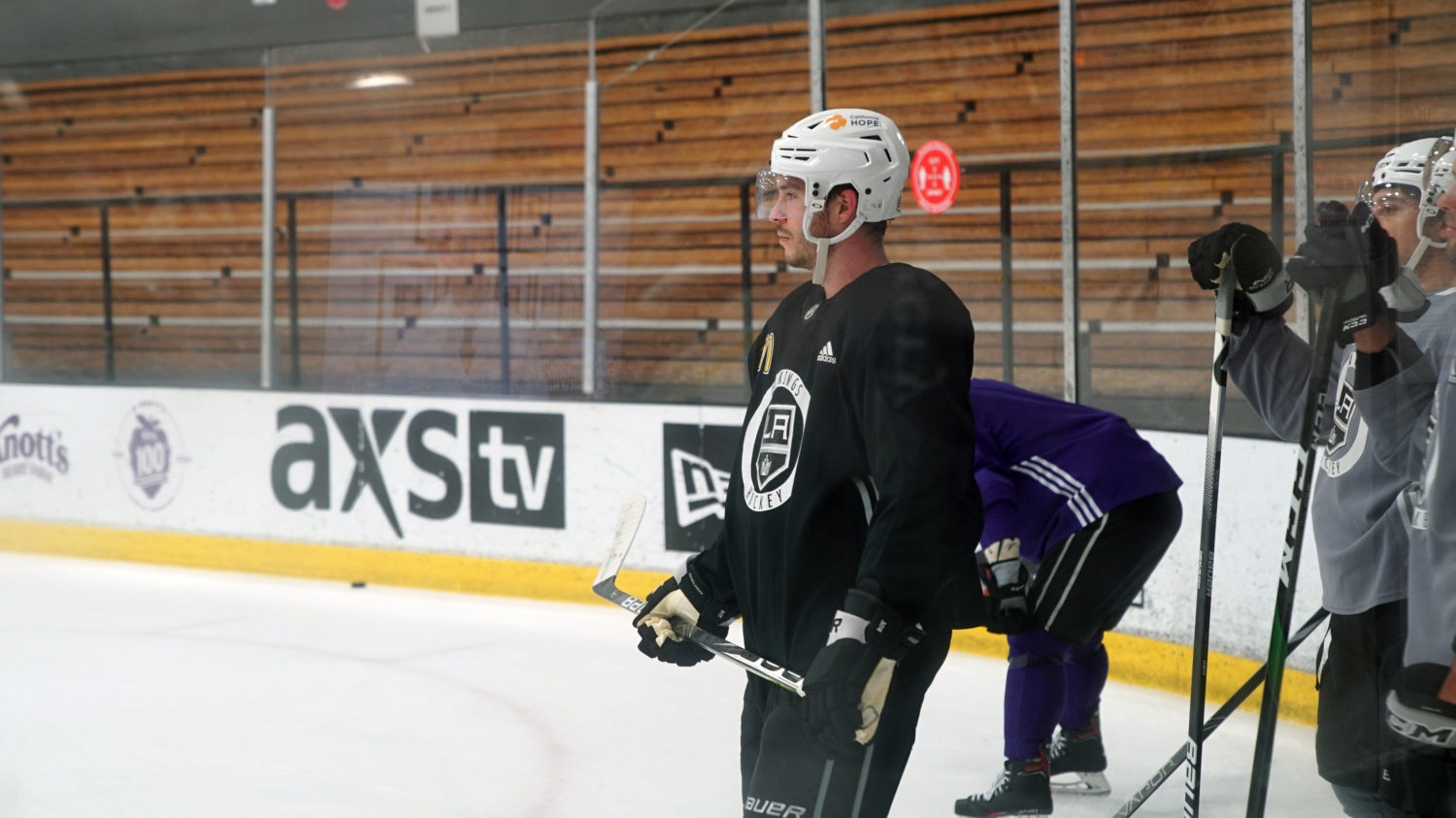 TONIGHT’S MATCHUP: The Kings are back at home tonight, one of five consecutive home games to close out the month of April.

HEAD-TO-HEAD: Forward Adrian Kempe leads all Kings skaters with five points, all goals, from three games played against the Ducks this season. Just two players across the league have more goals than Kempe versus Anaheim this season, Mikko Rantanen (COL) and Jakob Chychrun (ARI), and his six career goals against the Ducks are his most against any NHL opponent. Defenseman Drew Doughty leads all blueliners with four assists from three games played. On the Anaheim side, a quartet of players – Rickard Rakell (2-1-3), Nicolas Deslauriers (1-2-3), Kevin Shattenkirk (1-2-3) and Max Comtois (0-3-3) have three points from three head-to-head matchups this season.

Starting in goal, the expectation is that we would see goaltender Cal Petersen, after Jonathan Quick started on Wednesday, with Petersen entering in relief. Petersen has never beaten Anaheim in his NHL career, standing at 0-1-1 from three starts this season, with a .881 save percentage and a 3.93 goals against average. In the lone game played at STAPLES Center thus far this season, however, Petersen made 40 saves on 42 shots in a losing effort.

In terms of the skaters, yesterday’s practice gave us an indication that the Kings might line up in the same way at the forward position that they ended their last game, assuming a standard alignment. That group is listed as follows.

The backend depends mostly on how Tobias Bjornfot and Matt Roy are deployed. Todd McLellan said this morning that he expects both players to return to the lineup tonight and has in the past referenced them returning as a defensive pair, which they were prior to both exiting the lineup. Whether it’s 1 or 2 defensemen exiting the lineup remains to be seen, as McLellan left the door open to align either with 11F/7D, or the standard 12F/6D alignment.

In terms of the youngest member of the Kings blueline, Bjornfot, he hasn’t featured in a game since March 31. Coming back from the type of injury he had, the message is to get comfortable playing, and quickly, showing some confidence in the process.

“Just get comfortable again playing, it’s been awhile, and he’s recovering from a head injury and you’ve got to get back on the saddle and ride the horse again for lack of a better analogy,” McLellan said, of what he’s looking for from Bjornfot tonight. “The corner work, the puck retrievals, the aggressiveness he plays with, are his legs and lungs strong enough to play a good chunk of the game? We’ll be looking for that and just show some confidence.”

DUCKS VITALS: The Ducks did not hold a morning skate today in Anaheim prior to tonight’s game. The expectation is that goaltender John Gibson will be in net for the visitors, for the fourth time in four opportunities against the Kings this season. Gibson is 2-1-0 against the Kings this season, and 12-6-0 in his regular-season career, with a .924 save percentage and a 2.17 goals against average, though this season’s numbers have not matched his career figures (.869 / 3.61).

Here’s how the Ducks lined up on Sunday against Vegas, their most recent game –

Similar in some ways to the Kings, the Ducks have juggled their forwards all around the lineup this season in hopes of finding the right combinations. Isac Lundestrom missed his sixth consecutive game on Sunday with an illness but has returned to practice and could be an option to check into the lineup tonight.

Layoffs??? Don’t Talk About, Layoffs
Tonight marks just the sixth time this season that the Kings have entered a game with more than two non-game days in between games.

Over usage of the word game in that first paragraph aside, the Kings have won just once from the previous five times and have frequently left the gates slowly in these types of games. Take the only prior home game against the Ducks this season, back on February 2. The Kings lagged off the start and look back at that game as one of their poorest performances of the season. Avoiding that lag from the beginning of tonight’s game will be important.

“First of all, we’ve got to take some responsibility and make sure that lag, or that lack of explosiveness at the start doesn’t happen,” McLellan said. “That’s on the players and the staff to make sure that we’re ready to go.”

The message has extended its way down to the players as well.

In terms of approaching tonight’s game, the Kings believe that they have gotten the necessary rest, they’ve worked on necessary things in practice, and now it’s time to execute in tonight’s game.

Andreas Athanasiou
I think we’re rested right now, it’s not every often in this kind of season where you get that rest. We had some good practice days, went over some good system work, so it’s all in place to go out there and just execute.

Sean Walker
I think definitely coming out to a fast start. The layoff there, with a couple days of practice, gave us some time to work on some things. We focused on our neutral zone, some of our tracks and sortouts, so everybody should feel pretty good and confident heading into tonight’s game.

Athanasiou really seemed to put it best – The pieces have been put into place here for the Kings, it’s now just a matter of executing.

Question for @LAKings Twitter – Are the Kings beginning a five-game homestand tonight, or in the middle of a seven-game homestand that had a quick flight to Colorado in between?

Is it a five-game homestand beginning tonight, or a continuation of a seven-game homestand, with a short trip to Colorado in between?

Regardless, the Kings will play their next five games at home (Anaheim x3, Arizona, Minnesota), followed by two games in Anaheim, which concludes the season series against the Ducks. Should be positive signs here, with an extended run at home, but just three teams in the NHL (Anaheim, Buffalo & New Jersey) have fewer home victories so far this season than the Kings do.

Naturally, that’s something that has to change. The Kings have posted nearly identical winning percentages at home (.450) and on the road (.454) this season. At STAPLES Center, the drop off has been staggering from a .588 mark last season, and the Kings know that an improvement in their own building is needed, especially if a push is to be made down the stretch.

With that being said, the Kings haven’t had an extended stretch of home games like this yet this season, with just one four-game set and that was to begin the season. Is McLellan looking at this upcoming slate as a chance to find a groove and establish consistency? 5 games was approximately 4 games, 2 periods and 15 minutes too long to predict.

“Yes, but you’re stretching it out too far for me,” McLellan said in response. “I think we have to get our game back in order, it’s been awhile since we’ve played, 5-6 days, but it feels like forever. We’ve had a chance to practice, heading out to Colorado and not being able to play gave us a chance to reset some things, but we’ve got to find our game. The start is important to get back to the intensity and the pace that the game needs to be played at. You’re talking five games out, I’m talking maybe five minutes in. There’s a huge difference there, but one leads to the other. We play five at home, three will be against our natural rival, which will be important to us, I’m sure there’s a lot of conversation about that, the rivalry and what not. What it boils down to is us finding our individual games and finding our team game, so that we can get back to being a productive team.”

Andreas Athanasiou has continued to play a role in the middle six for the Kings this season, providing offense in spurts, linking up recently with Blake Lizotte for an extended run on the team’s third line.

Hear from Athanaisou this morning. The speedy forward talked about his keys for success tonight, playing in front of fans at STAPLES Center for the first time as a Kings player, and his admiration for Patrick Marleau and his leaguewide accomplishment last night.

Kings and Ducks, in front of fans, tonight at 7 PM!