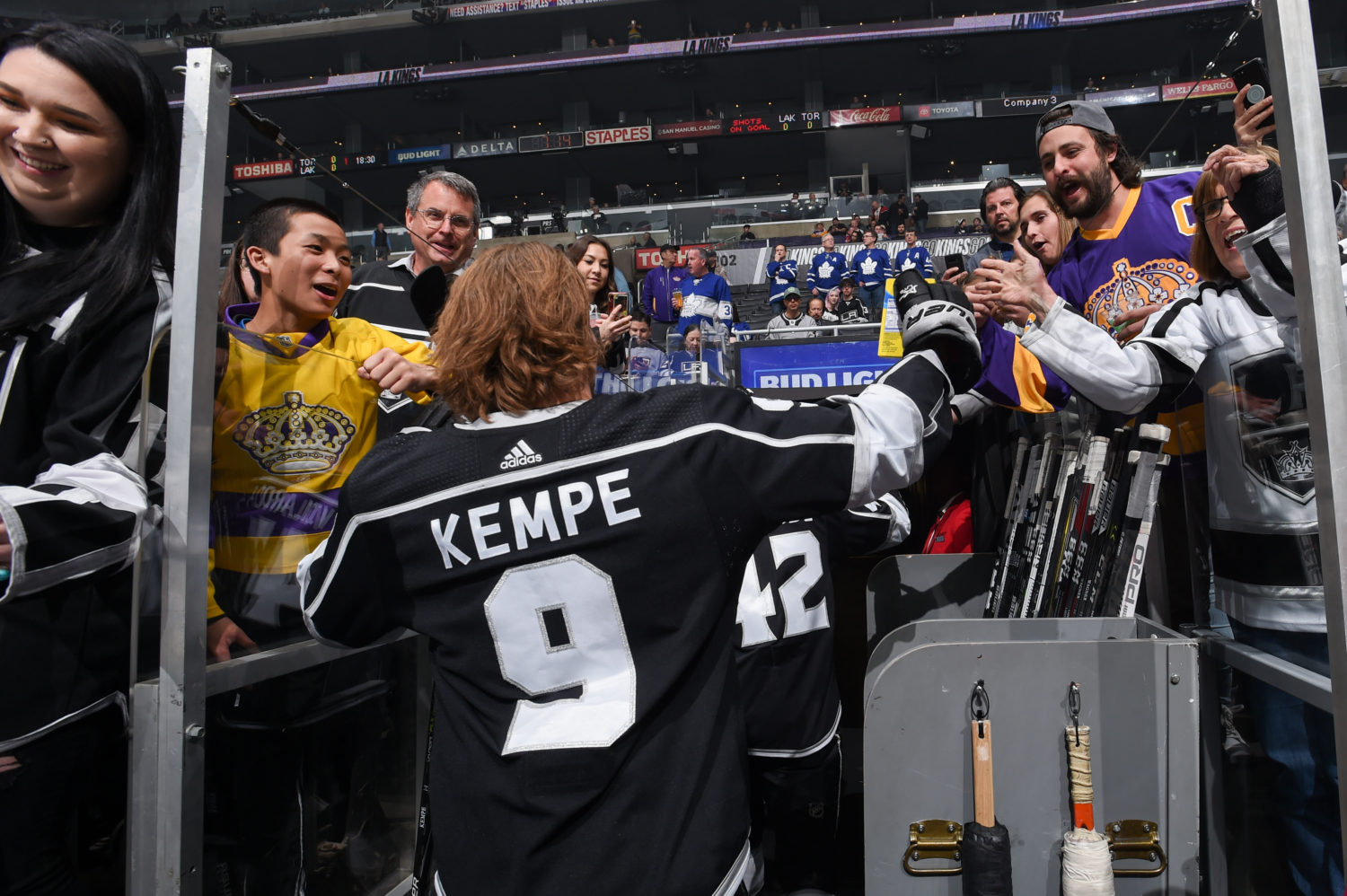 It has been more than 400 days since we’ve seen an LA Kings game at STAPLES Center with fans in the stands.

That number, which has been increasing and open ended since March 11, 2020, finally comes to an end tomorrow evening, as the Kings host the Anaheim Ducks in front of live fans for the first time this season.

It’s been a long road, and a long process, to get to this point, but tomorrow evening we’ll see some familiar sights at STAPLES Center. Tickets being scanned, jerseys in seats that aren’t printed on cardboard cutouts and best of all, the roar of a live crowd as the Kings hit the ice.

“We’re looking forward to it,” Kings Head Coach Todd McLellan said. “I think it can give us a bit of a boost, we’ve been able to witness a few involved in the game, and it may not be a large group, but it makes a huge difference. There’s some action going on, there’s noise, there’s movement, it’s not artificial anymore. I think it can make a huge difference.”

We’re obviously not going to see the capacity crowds that have filled STAPLES Center in the past, with just 35 percent of the venue able to be filled by state legislation, and that number coming in around 22 percent with proper social distancing requirements in place. Things are going to be different, but with the Kings now home for five straight games, the fans’ presence will be felt here in Los Angeles, including by those on the ice.

“We’ve been missing our fans a lot this year, everybody’s been excited for them to come back,’ forward Adrian Kempe said this morning. “Especially when you play in some buildings that have fans, they’re always extra fun to play in and I think that everybody is really excited to have our fans back, and I think they are as well.”

It wasn’t always a certainty though that we’d even get to this point. Far from it in fact.

“Originally, we thought no shot this year, but we kept working on it,” Kelly Cheeseman, Chief Operating Officer, Los Angeles Kings & AEG Sports, said. “November, December, January, it was no chance, we didn’t even engage with the state for probably three months, until public health got to a better place and vaccinations started to get rolled out. End of January was kind of when we re-engaged with them, and they started talking to us with more engagement, and that was when we felt like we might have a chance.”

It was still a process though for the state of California to get to this point. On Opening Night, back in mid-January, the thought was that we’d be in for a fanless season at STAPLES Center, with eyes on getting the Kings faithful back in the building in October 2021. Then, as things positively progressed outside of sports, that outlook changed into optimism.

“It wasn’t until the end of February that we thought that, April 15, we felt like 10 percent capacity was going to be realistic,” Cheeseman added. “It’s been a long process, it’s been 400-plus days, endless phone calls and engagement on it, had to stay patient, but we got it to a place where we’re going to get some Kings fans in by the end of the season, which is awesome.”

As we now approach an extremely exciting day, with the Freeway Faceoff played in front of fans for the first time this season, here’s a look at some of the decisions made, and what a Kings game may look and feel like down the stretch this season. 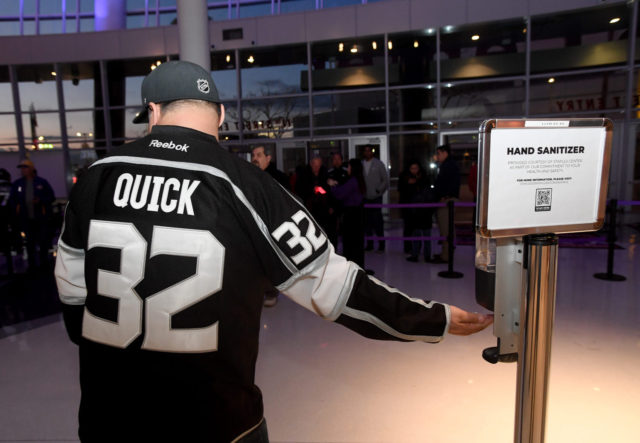 Capacity
When working through the return of fans, the Kings first had a choice to make. California currently allows venues located in counties in the “orange zone” to host either 10 percent of fans, with no testing or vaccination restrictions, or 35 percent with a negative test or full vaccination.

For two reasons, the Kings chose the latter. The first, is that a negative test / vaccination requirement creates the safest possible environment.

Second, at 10 percent, no food or beverage would be allowed to be served during the events, which really helped to make the decision for the Kings.

“At 10 percent, there’s no food and beverage at all,” he added. “When that came off the table, it was obviously disappointing to look at that, because the food and beverage experience I thought was important, to make sure it’s somewhat normal. After not being at a Kings game in 400 days, you probably want that Bud Light or that beverage at the game.”

The 35 percent number likely gives more Kings fans access to games as well, though it does create an additional step to get there. All factors that Cheeseman and the organization considered when making these final calls.

“It was a difficult decision, I’m not sure if it lands at the right decision of maximizing the amount of people that actually get to a game, but it was based off of the best experience possible, with the safest environment.”

Food & Beverage
While food and beverage is permitted to be served at the venue, the difficult part about it is that it is not able to be consumed at your seat. This obviously creates a less than ideal situation, but being here in Southern California, as opposed to say Colorado, which had snow falling when we hit the ground on Thursday, does provide an alternative.

That alternative is an outdoor area, where fans can enjoy their food and beverage while watching the game on a screen, with several areas around STAPLES Center to eat, as well as two restaurants at the venue.

“We’ll have food trucks outside, we’ll have a few bars setup outside, the game will be on the screen at STAPLES Center playing outside,” Cheeseman said of the outdoor setup. “With that, people may watch a period inside, a period outside. We’re trying to provide the best experience possible that’s fun.”

The goal is to, for the remainder of this season, provide a unique experience so that fans can still be able to eat and drink at games, while also meeting the restrictions implemented on the re-opening of venues. High-top tables will be set up in the predesignated areas in XBOX and Star Plazas, and fans can go between inside and outside throughout the game.

Feedback from STAPLES Center from NBA games, which hosted fans last week, was positive on the outdoor experience, and it should be an exciting addition to Kings games this year as well. An indoor – outdoor experience, that only California can provide.

Concessions will also be ordered in a new way, done through mobile ordering on the new LA Kings app. Mobile ordering has started to make its way to sporting events across the country, with fans in some venues being able to order food without waiting in that long line, a long-time obstacle during live entertainment.

“It’s something that was due at STAPLES Center for a long time,” Cheeseman said of the mobile ordering. “There have been venues that have instituted mobile ordering in the last few years, some very successful in a wider distribution. Having capabilities to speed that up and provide more convenience to our fans is really good. Our new mobile app has that all embedded in it, we really focused on that, planning for coming back to the venue. There’s a lot of technology enhancements that are going to be really fun for people.”

Coming to the game tomorrow?

Here's what you need to know about mobile food & beverage ordering at @STAPLESCenter 🍿🥤🌭 pic.twitter.com/V2255UIHFD

In-Arena Experience
There won’t be 20,000 people in seats at STAPLES Center tomorrow evening but adding even five percent of that will make all that much difference.

“We talked a lot about coming home from Vegas a few weeks ago, playing in front of their fans, and the energy that was in the building, then coming back to ours and playing empty,” McLellan said. “First period, I was really mad at our guys, let’s get excited, get some life here, but I think that’s the same for every team that goes back to an empty building.”

Well, there’s no more empty building to come back to!

While the added crowd noise won’t completely be gone, considering the still 80 percent of seats that will be unfilled, having natural crowd noise will change the game and the environment for the players on the ice.

Fan Excitement
Naturally, all of this doesn’t amount to much, if the fans aren’t excited to return to the building.

The sense from the team at this time is that excitement levels are high from the season-ticket holder base, though not everyone is necessarily ready or able to return to a game at this time. With the vaccination availability still in the early stages, especially for those who were just made eligible to receive the first dose, the expectation is not to see a partial capacity sellout on game one, but rather hopes of seeing it in the final set of games in early-May.

“A lot of excitement, about half of the season-ticket base has bought tickets to games so far,” Cheeseman said. “There are a lot of fans who are still asking questions, trying to find out exactly what the environment is going to look like, make sure it’s safe for them and how they want to take in a game. People are definitely excited to come to games and it’s fallen in with where the survey data had landed during the pandemic. 40-50 percent of the people were ready to go right from the get-go, and then there’s another 20-30 percent of people saying I want to wait 2-3 weeks, and then there’s another percentage that are saying a couple months.”

“Our motto has been that if you’re ready, we’re ready for you.”

The Kings are ready, and 24 hours from now, fans will be back in the arena. An exciting prospect for us all.

Those interested in tickets to upcoming Kings games, or the full ticketing policites, can visit lakings.com/tickets. Full STAPLES Center policies can be found HERE.